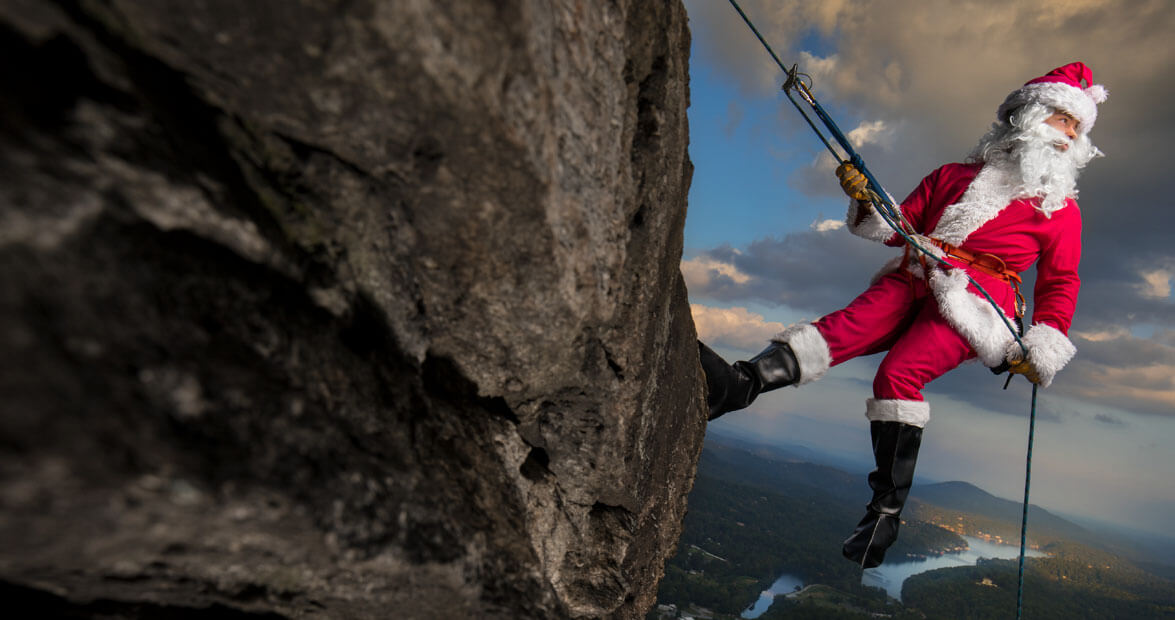 Santa doesn’t always travel by sleigh; sometimes he travels by rope. Just ask Travis Weil, 31, who annually wears not only the red suit and beard, but also a harness, a helmet, and other devices to rappel down Chimney Rock. He not only has a duty to deliver oohs and ahs from the eager and expectant crowd below, but also to keep himself aloft and alive while he scales the 200 feet of the chimney-shaped natural monolith.

A climbing guide and instructor for the other days of the year, Weil joined Fox Mountain Guides, based in Pisgah Forest, in 2011. It takes a certain attitude to be in the life-or-death business, and Weil is characteristically laconic: He was asked to “do the gig his first year, and thought it sounded interesting.” Stuffing the suit with an extra jacket became problematic, because he couldn’t see the rope. The fluffy beard tends to get in his mouth, too. And forget the white gloves — “They’d get trashed.”

On two early December Saturdays, he rappels up to eight times daily, barely touching the rock on his way down. Though a rappel has never been canceled due to weather, there have been days when the parking lot below is invisible beneath fog. “It’s a big rappel,” Weil admits, and as with regular Santas, preparation for his “flight” is key. Instead of checking his list twice, he goes up very early on the day of to fine-tune his tether anchor. Ropes can abrade as they rub against rock, so extra supplies are important. Having a second set of eyes on such a dangerous journey is also helpful, like when, a few years back, a friend — dressed as an elf, of course — accompanied him.

If you find yourself on the roadway below around Christmas, look up and listen up. Even though Weil wears no microphone, “you can hear my ho ho hos really well,” he says modestly. “The cliffs make a nice amphitheater.”