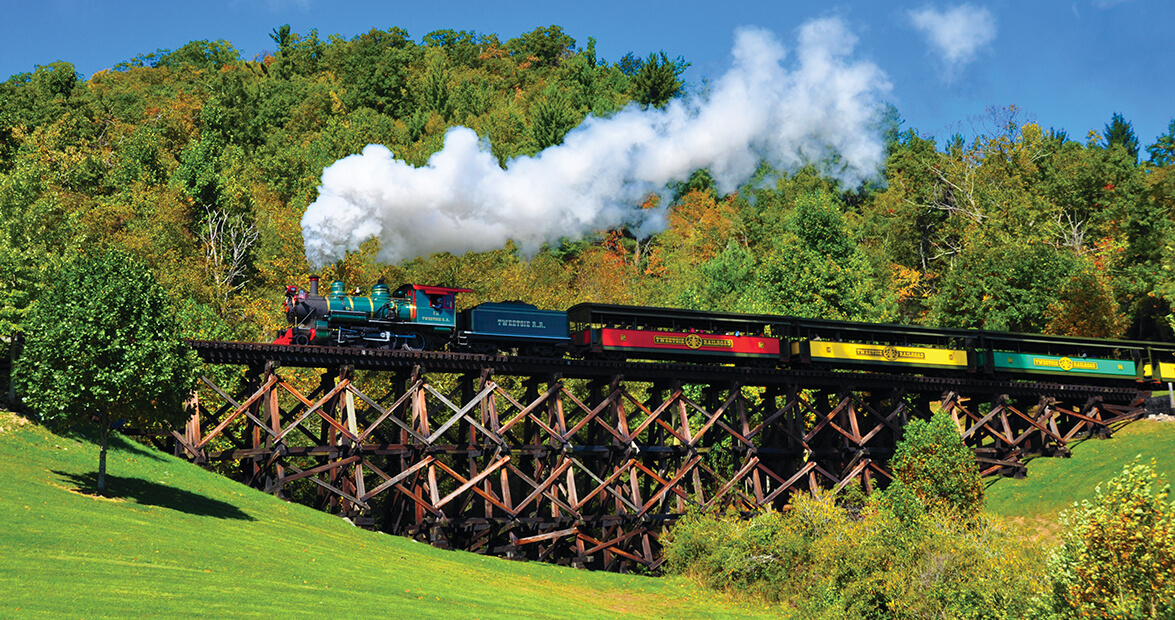 “I should’ve known that my marriage wouldn’t last when we went to Tweetsie and my husband stayed in the car the whole time,” a friend said, and I agreed, with long-after-the-fact indignation. Who doesn’t — who can’t — love Tweetsie? The big sign looms and lures on U.S. Highway 321 between Boone and Blowing Rock, and, like a homing pigeon, the steering wheel nearly turns itself. I’m ripe for another visit, my fifth, and a long way from that initial trip in 1960, where photographs have me behind bars, perched on my grandfather’s knee while he smokes in the frontier jail. Sometime after that, like Cher and Madonna, Tweetsie Railroad became a single-named phenom.

Although phenom isn’t right, because Tweetsie — the theme park and the train — is fairly humble, still chugging along, still doing pretty much what it’s done since July 4, 1957, opening day, and long before. “Depends on which history of Tweetsie you’re referring to,” says Chris Robbins, president of Tweetsie, and nephew of its founder, Grover C. Robbins Jr. “The history of Tweetsie as a railroad, or the history of Tweetsie as a theme park?” Well, both. One wouldn’t exist without the other, and like tracks entering a stationhouse, they eventually merge into a single rail not unlike the one Engine No. 12 travels for a quarter million visitors during its short, 140-day season.

Engine No. 12 is the sole survivor of the dozen or so ET&WNC — East Tennessee & Western North Carolina Railroad — locomotives. The railroad began its original 34-mile trek in 1882, from Johnson City, Tennessee, to the iron mines in Cranberry (near Banner Elk), and extended to Boone in 1919. Despite its beautiful mountain views, the railroad was an engineering nightmare, whose construction required that pack mules be lowered by block and tackle into one gorge. The train traveled through areas so rural that the ET&WNC acronym was nicknamed “Eat Taters and Wear No Clothes,” but it was the less-cruel nickname the locals coined that stuck — Tweetsie — because of the sound of the engine’s whistle.

“The train traveled through areas so rural that the ET&WNC acronym, for East Tennessee & Western North Carolina, was nicknamed “Eat Taters and Wear No Clothes.”

But then came better roads and overland trucking in the ’30s, and in 1940, a devastating flood wiped out sections of the track, dealing a crushing blow. The ET&WNC discontinued its North Carolina service in 1950, but Tweetsie escaped the scrapyard when railroad buffs purchased and moved her to Harrisonburg, Virginia, as an “excursion” railroad — also known as a tourist attraction. Two years later, in 1954, Hurricane Hazel washed out the roadbed, and Tweetsie was on the block again. Gene Autry, Hollywood’s cowboy, signed an option to buy her for his films. When that venture proved prohibitively expensive, even for a movie star, Grover C. Robbins Jr., a North Carolina mountain native, railroad enthusiast, and, as his nephew states it, “a tourism entrepreneur,” stepped up and purchased No. 12. For $1.

Tourism promotion ran in the Robbins DNA. Grover’s father had founded the Blowing Rock tourist attraction (“Which was just a rock!” Chris adds), and Grover himself went on to found Hound Ears, the Beech Mountain resorts, and others. He sent the locomotive and cars to the Carolina & Northwestern Railway Company shop in Hickory for restoration in 1956, and, meanwhile, purchased and leased land tracts for his excursion railroad, Tweetsie Railroad. That first year, visitors came, rode the train for a mile, ate their homemade picnics, and called it a very pleasant day indeed. The next year, one mile became three.

By the time I sat astride the life-size plastic horse permanently harnessed to a Main Street hitchin’ post in 1960, the Wild West theme had been adopted. “Everything on TV was a western: Lawman, Gunsmoke, The High Chaparral,” Chris says. “And a lot of Wild West theme parks were starting about that time in the nation. It was the need for more than just a train ride, something for kids to do, somewhere to shop, somewhere to get a hot dog. Add some rides, and a Wild West show. Add a saloon, and [Tweetsie] evolved into a theme park, the first theme park in North Carolina,” he continues. “One of the first in America. Disneyland is only [two years] older than Tweetsie Railroad.” Not only that, but No. 12 was added to the National Register of Historic Places in 1992.

It’s not unusual for Chris to meet families of four generations at Tweetsie, their vivid memories of early visits — like mine — intact. “We’re still a small theme park; we still do what we did then, but on a larger scale. With more offerings, more shows, more attractions, things have come and gone over the years,” he says. “You’d find, since you came here as a summer camper, that things have changed tremendously, and yet not at all.”

An on-point observation, because on my fourth and fifth visits, in the late ’80s and early ’90s, I had my children in tow. There was the Tweetsie sign, with its distinctive “frontier” font: letters packed in and serifed to the max. There was a chairlift and zoo, the live shows and carnival rides. But it’s doubtful that anyone treks to Tweetsie to pet a llama or watch the can-can girls. When all is said and done and eaten and petted and ridden, it’s all about the train. A remarkable little shiny-green, narrow-gauge wonder that could, and did, and does, and will.