In retrospect, the choice to belt out the song “Titanic” in the high-ceilinged mess hall — Husbands and wives, little children lost their lives; it was sad (MIGHTY SAD!) when that great ship went down — may not have been the best decision at a summer camp focused on boating. Probably neither was the “bug juice” — ultra-sugared, crimson-red Kool-Aid poured from pitchers at every meal — but it paired nicely with the white bread slathered in butter that I learned to survive on, being suspicious of the slick, slightly sweating cold cuts on platters.

This was lunch at Camp Seafarer (another singalong: “To a little ole camp in Arapahoe, where the friendships begin to grow …”) in the summer of 1968, when, to become “well-rounded,” I left the mountain camp I’d attended for three summers and headed east, to the all-girls sailing camp on the Neuse River. 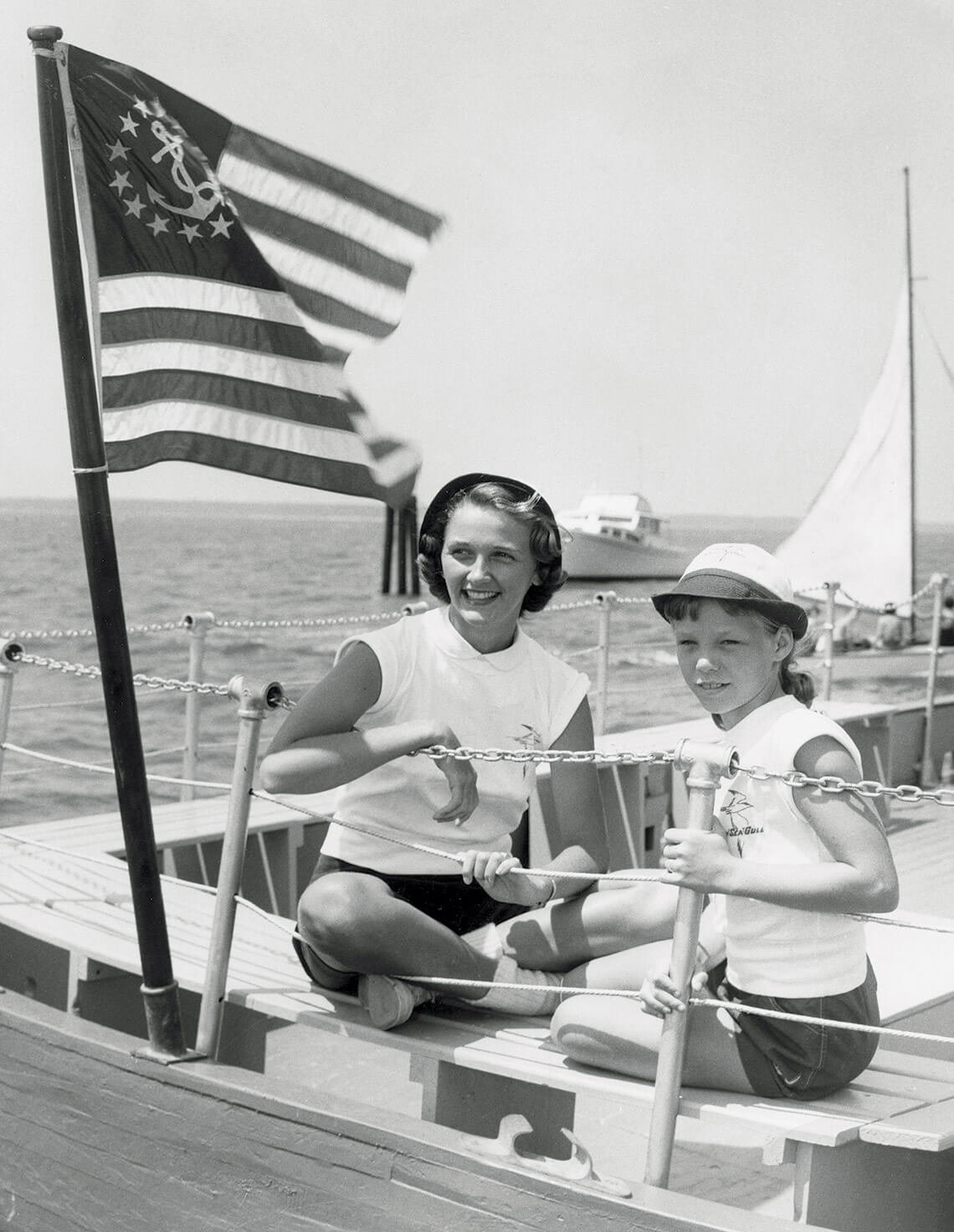 Founded in 1961 as a sister camp to Sea Gull (established in 1948) down the road, Seafarer was still young then, not the institution it’s become, thriving and beloved, with thousands of alums. As YMCA camps, the ethos at Sea Gull and Seafarer was achievement, built around a self-determining schedule. Glossy cloth badges were awarded for every goal attained, so that, by session’s end, a T-shirt was as heavy as a cape. First up was earning your swim band, an elastic necklace worn 24/7 to indicate your safe swimmer status. The elastic one that I earned started out white, but the bands became grayer as the session went on, depending on how much you chewed on it, or showered. Older campers with a “Johnny Sea Gull” — a boyfriend at Sea Gull — twisted a knot in theirs.

Days at Seafarer were divided not by hourly activities but by mornings “on the land” and afternoons “on the sea.” But even the land activities were water- and ocean-oriented, like The Mile Swim Club, or The Shark’s Teeth Club, for those who found a hundred of the fossils along the banks of the Neuse. During land mornings, I worked on my archery badge and, when word spread that Camp Director Lil Taylor was driving around in her golf cart, dropped everything to call out, “Ahoy there, Lil!” which she rewarded with Atomic Fireballs and Sugar Daddies tossed like Mardi Gras beads. Cooler girls “cabin squatted” in the rafters, debating what they’d wear to the weekend dance at Sea Gull, where, should they cling too closely, they received a warning tap on the shoulder and a whispered, “Too much PDA.”

Yes, Seafarer was all about boating and the nautical life. On Sundays, and for “long cruise” — the special, once-a-session journey by boat to Morehead City, where we ate at the Sanitary Fish Market and Restaurant and shopped for trinkets at Dee Gee’s — we wore middy blouses and Dixie Cup hats, the round, white, thick cotton hats sported by every Navy swabbie and Seabee. 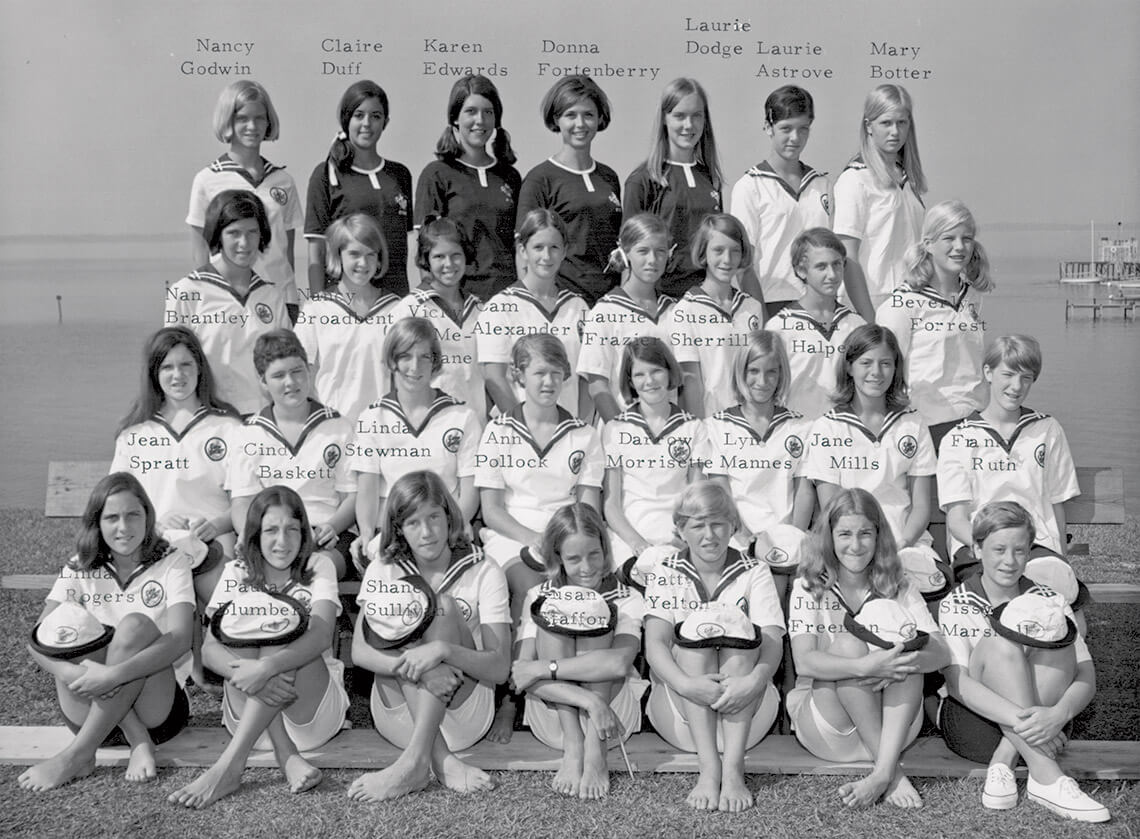 Already a skier, I knocked out the motorboating and water-skiing badges in a single afternoon, but my only experience with a sailboat was in a Sunfish, one step above a raft, on the glassy surface of Lake Summit. Seafarer had a fleet of sailing vessels, and the first rung on the ladder was “Flipper Skipper,” or mastery of a boat with an actual cockpit and a centerboard, whatever that was. Instead of rest periods spent dreamily reading Nancy Drew, I practiced knot-tying with the window-shade cords beside my bunk and studied my Blue Book, a stapled pamphlet with diagrams for nomenclature, a term I’d never heard. It wasn’t “the back of the boat”; it was the stern. Ditto for “ropes,” which are lines. On to rudder, tiller, halyard, cleat.

When the bell rang, we’d race to the waterfront, where the counselors chewed salt tablets to stave off dehydration, to demonstrate our skills — or, in my case, to learn that a “bowline” knot was pronounced bowlynn. Ditto for “gunwale,” which had somehow morphed into gunnel.

Tacking and coming about are all well and good for memorizing on the page but take on a new immediacy when you’re standing in chest-deep water, rigging a boat while battling afternoon chop on the Neuse, where the wind is boss. Never mind the terrifying term jibe, for when the boom swings wildly and capsizing is imminent. Then you were meant to just stand on the centerboard! — yelled from the shore — to upright the vessel. A true challenge while wearing tennis shoes as protection against oyster shell cuts, and blue jeans because a swarm of stinging jellyfish were lazing around the Neuse. One wedged its way between the waistband of my sister’s jeans and her stomach, sending her, howling, to the infirmary.

Consequently, I spent a lot of time in irons, facing into the wind, listening to the sail luff and going nowhere, and trying to figure out the logic of pushing a tiller in the opposite direction of where you wanted to go. Still, I managed to complete the course of buoys that proved your sailing chops and was urged toward the lofty goal of “Flying Scot Skipper.” 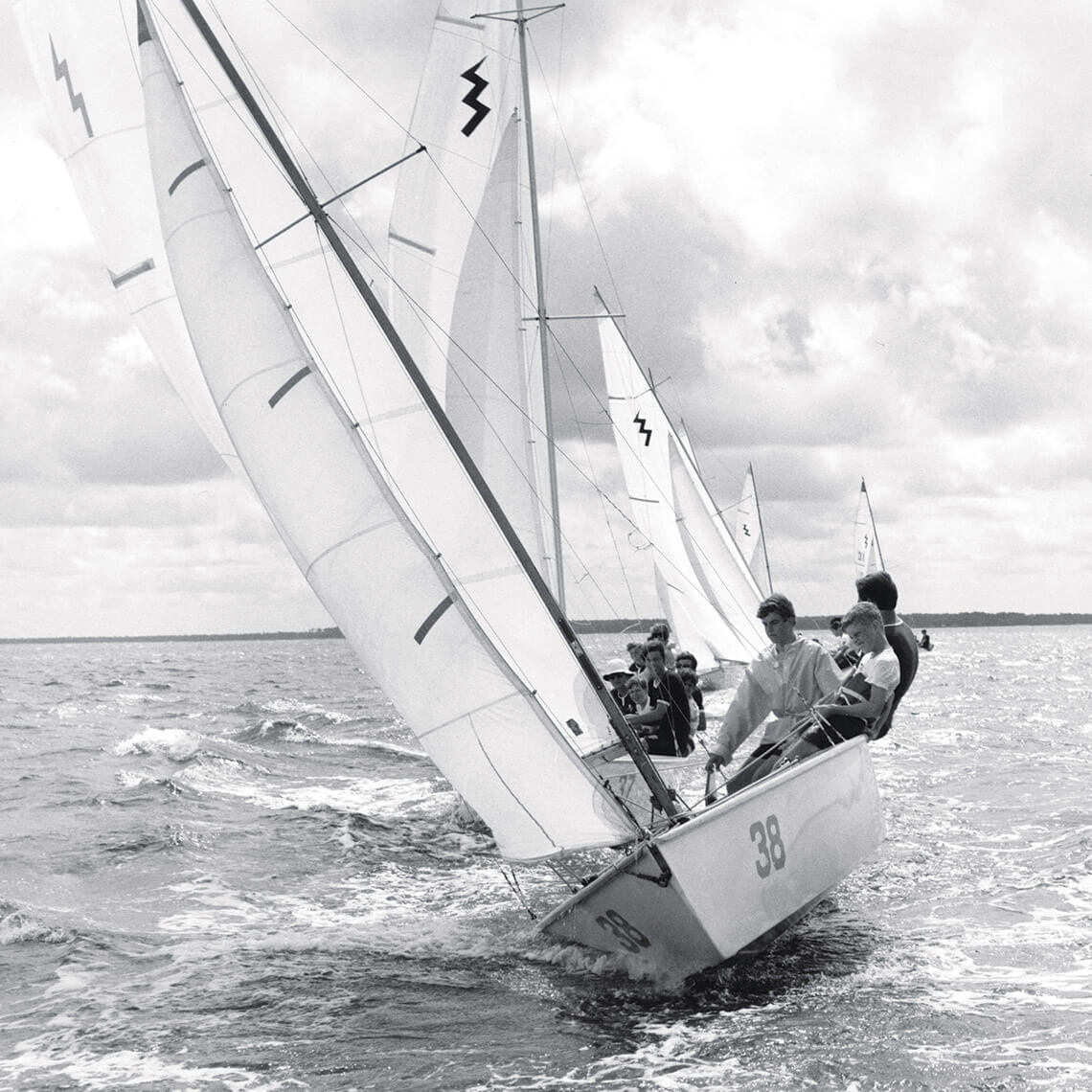 The sailboats known as Flying Scots were at the top of the food-chain fleet at Seafarer: beautiful, graceful things, sleek and speedy. The sight of two dozen Flying Scots with full white sails tacking this way and that across the water during Sunday afternoon regattas was breathtaking. But … Flying Scots? Flying Scots were beyond my reach in every context. They had two sails, for Pete’s sake, and winches. And jibs. I settled for conquering the semaphore flag alphabet.

These days, my sailing life revolves around my husband’s 16-foot Hobie Cat on Lake Waccamaw, where the wind is occasionally strong enough to allow him to hang over the pontoons in a “diaper harness.” I still know just enough of the Parts of a Sailboat that I can sound officious without having to offer any assistance. I’m along for the ride and sailing’s lovely sounds: the slap of a hull against the water, the swoosh and splash of waves rising beneath the taut tarp laces. How can anyone not love a sailboat when someone else is sailing it?

As for the Titanic, maybe the Lord’s almighty hand said that ship would never stand, but nothing got between me and my Shark’s Tooth Club badge.

Get Your Sea Legs

A glossary for landlubbers, 54 years after Seafarer rest periods, with apologies to true sailors …

A glossy, removable fin that fits in a slot in the hull of the boat, which, I reckon, keeps the whole thing upright in some law of physics that I can’t explain.

That flat vertical wedge on the back — I mean stern — of the boat that moves right or left. Don’t forget to raise it after you sail, or barnacles will grow on it.

It’s a stick. Seriously. Just a long pole attached to the rudder for steering. If you want a true steering wheel, you’re going to need a bigger boat, as they say.

The rope — my mistake, “line” — one pulls on to hoist the sail, just like venetian blinds. The origin comes from “haul yard,” referring to a stick — or yard — that supports a sail. OK, I’ll bow to that logic.

Not to be confused with golf or football shoes, a cleat is a double-pronged metal device that looks like it belongs on a coatrack. On a pier, you wind lines around it to make sure your ski boat doesn’t float away. On a sailboat, it’s fastened to the deck and is intended to keep all those various ropes from getting in the way. In both cases, there are complicated methods to loop the lines with names I’ve blocked. Get someone else to secure the dang thing.

The main sail, and, as long as I’m in charge, the only sail. Forget jibs, those smaller triangular sails at the bow. Jibs are for experts. See “Flying Scots.”

C’mon, why can’t we just say Side of the Boat? Because guns used to go there in ye olden days, that’s why.

Unless you’re on the open sea, sailing rarely means going in a straight line, unfortunately. Instead, you have to “tack,” which means going in one direction for a while, realizing there’s a pier — or the shore — coming at you, and changing course by turning the boat into the wind.

An intentional turn, in tacking, meaning that the wind is, in a minute, gonna come from the other side of the boat. “Coming about” has its own official lingo. When the captain says, “Ready to come about,” you hastily scramble over to the other side of the boat, and then he shouts, “Hard alee!” Which translates as, Move, you idiot, or the boom will hit your head, and I don’t have time to fish you out of the water and deal with your concussion.

This is the default term for I quit. Turn the sailboat directly into the wind, the sails go limp, and you go nowhere. Take a rest or admit defeat and wait for a better sailor to come rescue you.

The round thingamajig on the deck used to wind up sailing lines. Really convenient for holding on for dear life.

A padded fanny-harness for Hobie Cat sailboats so that you can “hike out” over a pontoon in a high wind. You’re suspended on one side over the water, and the sail is nearly touching the water on the other side. Just, no.

A system of communication from ship to ship or ship to shore, involving specific movements while holding a colored flag in each hand. It’s sailing email for emergencies. Or as I tell my children, “Don’t worry, it’ll never happen.”