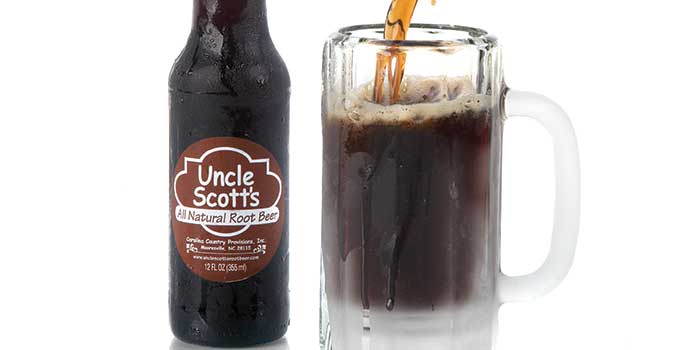 Have you ever tried to read the ingredient list on a soda bottle?

I’ll save you the trouble: Most of it’s gobbledygook and misdirection. You won’t find the secret to Coca-Cola hiding under “natural colors and flavors.”

So it’s startling to look at the label for Mooresville-based Uncle Scott’s root beer and see real stuff, like cinnamon oil, anise oil, licorice-root oil and, huh, does that really say “wood extract”?

“We do full-disclosure,” says Suzanne Ramsey, who makes Uncle Scott’s with her husband, Scott. “We’ve tried to make it as pure and simple as we can.”

Yes, there is wood extract, but it’s not like there’s wood pulp floating in the bottle. Root beer is part of an old tradition of making beverages from natural things, like the roots and bark of the sassafras tree, as well as the bark of birch and cherry trees. Don’t try this at home, though: Sassafras has a substance called safrole, a carcinogen that has to be removed before you can use the essential oils.

The Ramseys didn’t intend to make a living from root beer. They started out making wine from organically grown grapes. Root beer was just going to be a side project until the wine was ready. But when a freeze wiped out their vines, the root beer took off — “in this goofy economy,” Ramsey marvels.

Even though “Aunt Suzie” is really the root beer maker, the name came from the reaction of one of her twin nieces when Scott and Suzanne took some of their root beer on a visit to her family in New Mexico: One of them took a swallow and declared, “Uncle Scott! This is the best root beer I ever tasted!”

“I said, ‘there’s our name,’” Ramsey declares. “Sometimes you have these magic moments.”

There are chefs in Charlotte and Asheville now cooking with Uncle Scott’s. And it’s available in Whole Foods and independent grocery stores across North Carolina.

Learn how a Charlotte chef cooks with Uncle Scott’s, this month at eats.ourstate.com.

People have asked Suzanne whether being so explicit on the label might be risky. Couldn’t a competitor copy what she’s making?

She just laughs at that notion: The label might tell you what’s in the bottle, but not the exact formula. That took awhile to figure out.

“If you think you have the time, more power to you. Go for it, babe.”