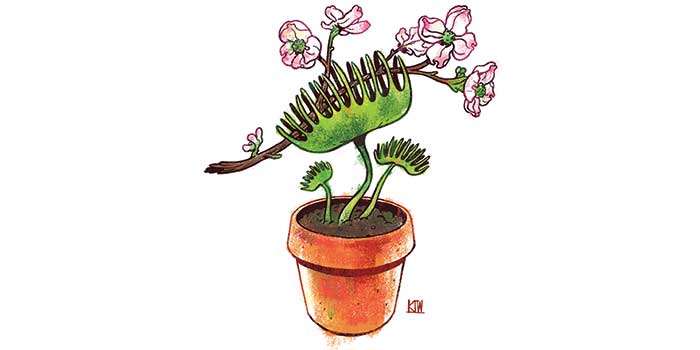 The other day a friend of mine asked me if I had a tattoo. I told him that not only was I too old for that (a man in his mid-50s getting his first tattoo is light-years beyond a midlife crisis; it’s a flat-out desperate cry for help), but also I could never go through with it because I have long-standing, deep-seated commitment issues. Marriages are meant to last until death does us part, and bless the millions who have made this happen, but we all know that not every union survives. A tattoo, unless you have thousands of dollars to pay a doctor to zing you for hours with a laser wand to remove it, is forever.

But in fact, if I were to imprint some image permanently on my body, I know exactly what it would be: that most exotic, mythic, sexy, and to my mind woefully underappreciated plant native to our Old North State — a Venus flytrap.

I’m no botanist. I can barely tell crabgrass from kudzu, but I have long been obsessed with the Venus flytrap. That the plant is native to a region only a couple of hours from where I grew up has certainly fueled my devotion, but even if I were from Murphy, I doubt I could resist a plant that sits around awaiting lunch to alight innocently in its clutches, so that it can entrap its prey and slowly devour it. Edgar Allan Poe might have made it up.

But no one made it up. Someone happened upon it. According to the North Carolina History Project, “it first received attention in the 1750s, when Gov. Arthur Dobbs remarked how unusual it was.”

Men far more famous than Governor Dobbs have fallen under its spell. Charles Darwin, who knew a thing or two about species, called it “one of the most wonderful plants in the world,” and the 18th-century naturalist William Bartram, on his famous journey through the South, made note of it in his journal in a prose so rapturous that the only proper response to his fanaticism is “Down, boy, down!”

“See the incarnate lobes expanding, how gay and sportive they appear! ready on the spring to intrap incautious deluded insects! what artifice! there behold one of the leaves just closed upon a struggling fly, another has gotten a worm; its hold is sure, its prey can never escape — carnivorous vegetable! Can we after viewing this object, hesitate a moment to confess, that vegetable beings are imbued with some sensible faculties or attributes, similar to those that dignify animal nature; they are organical, living, and self-moving bodies, for we see here, in this plant, motion and volition.”

I have nothing against a dogwood, our official state flower. But that mountain of conceit to the north of us also claims the dogwood as their state flower, and I don’t see why we have to share anything with a state that refers to itself as a commonwealth. I might be revealing my ignorance here, but to my knowledge no one has ever suggested that the dogwood is imbued with sensible faculties. And though, since 2005, the flytrap has been the official state carnivorous plant, this seems a little like claiming barbecue is the best pork product of the state, when everyone knows barbecue is about way more than some pig.

So I hereby proclaim myself the leader in a campaign to make the flytrap the official flower of North Carolina. Yes, it’s true that I came to know the flytrap the way most of us did — by sticking the lead of a No. 2 pencil within its jaws in some fourth-grade classroom — and I confess I have, like most people who have owned one, fed it inappropriate foodstuffs, like a pinch of a Big Mac or (with deep shame do I admit this) a Bayer aspirin. But I came around. The more I learned about the plant, the more incredible it seemed to me that it is indigenous to only a few dozen miles in my native southeastern part of the state.

There is another, slightly fantastic but far more compelling reason for my campaign. It involves another mystery that took place in coastal North Carolina: the Lost Colony, of course. I’ll admit to an obsession with the colony as well, but I’ve never bought any of the various scenarios offered up as explanations. A part of me does not care to know what happened to the first white people in America, since plenty more arrived soon enough, and took what wasn’t theirs to take. But the colonists were just doing what people have done since the origin of the species: lighting out for the territory ahead. That it did not belong to them, however, only adds support to my theory that the colonists, lost somewhere in the swamplands south of Wilmington, came upon a Native American medicine man with such great powers that (more out of benevolence than vengeance, sensing their inability to adapt to their surroundings) he was able to turn them into not only flytraps but also pitchers, sundews, bladderworts, butterworts: all the carnivorous variations from which our flytrap was selected to represent the state.

Didn’t Bartram himself claim the flytrap uniquely animal in its possession of motion and volition? Down in Clinton in the 1970s, when we wanted to make like a banana and split, we would say, “Let’s motivate.” The colonists were definitely in motion, and they definitely had volition to motivate off that tiny strip of sand, but contrary to those theories that posit they were being pursued by unfriendly natives, I’ve always assumed, having spent some time on the Outer Banks in the summer, that it was mosquitoes they were fleeing. Which adds a touch of irony to my theory: If you run from a bug, you might well get turned into something that runs off bugs.

Though an Outer Banks mosquito is a beast of such ferocity and magnitude that it hardly qualifies as an insect. Which is why I am also starting a campaign to replace the lovely but rather common cardinal, which six other states also claim as their state bird, with the Outer Banks mosquito.