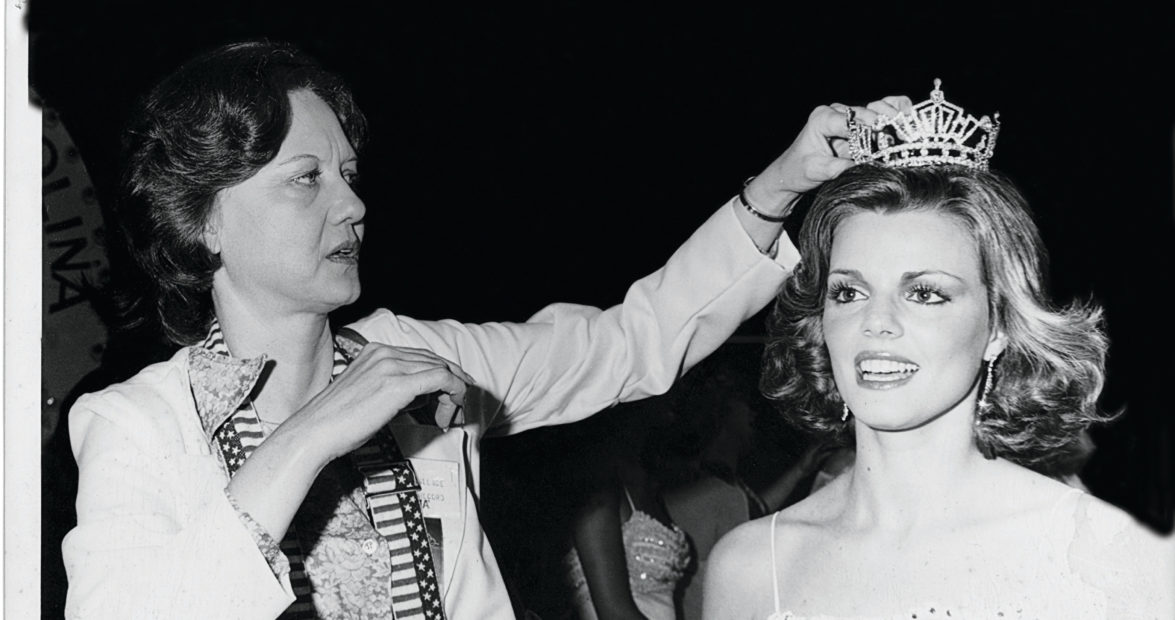 Venus Wallace is a newspaperwoman.

She may be officially retired, but she still has that inquisitive “nose for news” that comes from years in the business. And she has definite opinions about it all. Already during my visit, we’ve talked about politics (she’s against it), the economy (“what’s left of it”), and people in the news (“Most celebrities are tacky people”).

She’s tough. Not exactly the kind of woman you’d expect to be a champion of beauty pageants. But Venus is unconventional.

I met Venus back in the ’70s when I was emceeing a lot of festivals and beauty pageants around the state. Venus was there for most of them, taking photographs for The Denton Record, the local newspaper she ran with her husband, Ed. They sold the paper in 1995, and Ed passed away in 2002.

Those folks we used to know were pageant folks — contestants, judges, and performers — people all across the state who constituted an element of North Carolina culture that has diminished in the past several years.

So how did a newspaperwoman like Venus discover an interest in beauty pageants?
Back in our day, there was a pageant, either a Miss North Carolina preliminary or a festival pageant, in almost every city, town, and hamlet.

As we sit in her living room, Venus reminds me that she and Ed got into all the pageant stuff because Ed was a member of the Denton Lions Club, which sponsored The Miss Denton Pageant. As a devoted partner, Venus directed that pageant and, as newspaper people, they looked for ways to promote the town through the pageant. (The Denton Lions Club still sponsors the pageant, and Venus’s daughter, Theresa, directs it.)

Eventually, The Denton Record began to run a page every week about where Miss Denton had been. That turned out to be just about everywhere in North Carolina. Both the pageant and Denton benefited from the exposure. Everybody who sponsored a pageant subscribed to The Denton Record so they could see the pictures of their respective queens posing with Miss Denton. For no additional costs, all those folks began to learn about and love the little town in the middle of the state.

The promotion effort was a family affair.

“Suzi and Theresa [her daughters] were not real happy about going to all those pageants back then,” Venus remembers. “They would distribute copies of the paper to all the folks who attended the pageants. That was not very glamorous compared to being a part of the elaborate stage productions that were put on back then. But it was an effective way to get people to read about Denton.”

Thinking back on those pageants, I start to remember some of the participants and wonder where they are. Venus knows. Susan Lawrence Googe, for instance, became like family and remains in touch with Venus. Susan was Miss North Carolina in 1975. “She’s just as pretty now as she was when she was Miss North Carolina,” Venus says. Susan married Steve Googe, the director of economic development in Davidson County, and they have two grown sons. Venus has been there for all of Susan’s big moments, from Miss Thomasville to Miss North Carolina to her wedding.

“Other than the pageant, the only time I saw her in a dress was at my wedding,” Susan says of Venus. “There was usually a reception following a pageant, but she always wanted a late-night meal at The Waffle House.”

That unconventional attitude carried over into Venus’s view of pageants in general. “Back then pageants were serious events,” Venus says. “I still believe that ‘girls should be ladies.’ They had the responsibility of representing their communities. It involved a lot of time and commitment. At the same time I wanted them to be themselves, too, not fit into a cookie-cutter cliché of a beauty queen.” She admired girls with an independent spirit much like her own. “I never cared much for ‘system’ pageants where very young girls entered more for their mama than because they wanted to.”

Googe, Susan’s husband, reminds me that The Denton Record became a kind of unofficial newsletter for the Miss North Carolina Pageant. Googe was in charge of communicating with all the local pageants. Because everybody read the Denton paper, with Ed and Venus’s help, they could use the paper to keep all the pageants across North Carolina up to date on state activities. Ed and Venus did that at their own expense.

Nobody would have suspected that Venus was a pageant advocate. She never adopted a glamorous persona. When I would stop in the newspaper office for a visit, I would usually find Venus clad in the requisite T-shirt and jeans, cigarette smoke drifting across piles of photos and papers. She did dress up a little bit for the pageants themselves, but Venus was, first and foremost, a newspaperwoman.

She was just as interested in the outcome of the high school football game as she was in knowing the winner of a pageant. She and Ed attended town council meetings and were involved in every community activity that came along.

“Newspapering is a full-time business,” says Venus. “And covering town news and pageant news kept us busy. Many times we’d cover three or four pageants a weekend, as well as the high school ball games. We’d have someone phone in the results of a pageant, but most of the time we tried to get there personally.”

That would be a tough task under any circumstance. But, you see, Venus never learned to drive a car. She relied on others, including judge and emcee Janet Hogan, to give her a ride.

“It was hectic sometimes,” Venus says. “Sometimes we didn’t know exactly where we were going or how to get there, but she’d come from Norman [Hogan’s hometown in Richmond County], pick me up in Denton, and we’d go to Asheville or Morehead City or any of the hundred towns in the state for the weekend. We had a great time and never had a wreck.”

For me, visiting with Venus provides more than just nostalgic conversation.

I’m only one of many who cherish her friendship and appreciate all she did for the state and her community. I’m personally grateful for the fact that The Denton Record was one of the first newspapers to carry my column.

She is officially retired now, has quit smoking, and spends time working out crossword puzzles (in ink) and doing “as little as possible” while watching old movies, admiring the achievements of her children and grandchildren, and talking with visitors. She doesn’t wear a tiara on her head or a satin sash across her shoulder. She never waves a scepter.

But Venus is still the queen of all she surveys. Tiaras and typewriters, lipstick and printer’s ink, musical stage productions and town council meetings. For Venus Wallace it was all in a day’s work and no conflict at all.