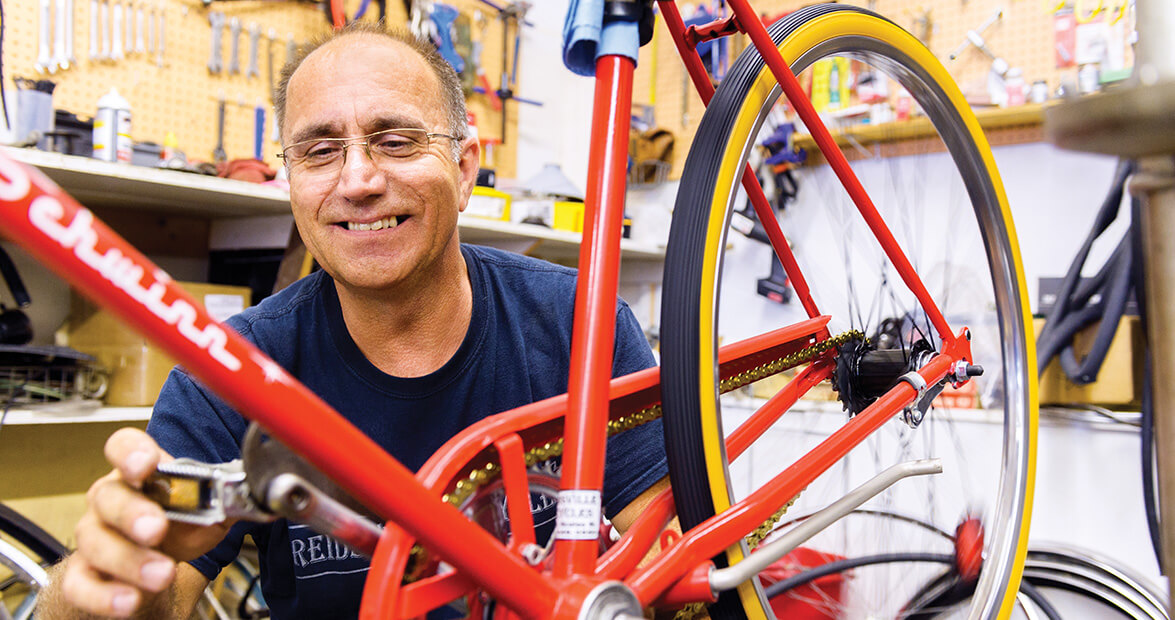 Bill Davis deeply coveted the orange beauty. It was low-slung, with chopper-style handlebars, a sleek banana seat, and a small front wheel designed for ultimate wheelie-popping capability. Davis was about 12. It was the late 1960s, and Schwinn had just released the Krate bicycle, capitalizing on the muscle car and chopper craze sweeping the nation, including Englishtown, New Jersey, where Davis grew up.

The new Krates went for about $100 — too much for Davis’s family to afford. He was devastated. Then, to make his suffering even more acute, one afternoon he saw his best friend pedaling around the neighborhood on a brand new Krate, its bright orange frame blazing like the sun.

Then and there something started to take shape inside Davis. He scrimped together a couple of bucks, cajoled his parents to take him to Sears, and bought a big rear tire and a small front tire, which he affixed to his old, beat-up, 20-inch bike, making a homemade version of a Krate.

What started was Davis’s love of bicycles, particularly vintage bikes, which he now restores at his shop, Reidsville Bicycles in Rockingham County.

Davis carries a line of Jamis bicycles, but he says restoration and repair work make up the majority of his business, along with occasionally selling vintage bikes and parts on eBay.

“What I found is that people in the South are a lot more interested in vintage bikes compared to up North,” he says. “People here just seem to like fixing up old stuff. Whether it’s a bike, a car, or a tractor, they have a greater appreciation for restoration.” Case in point: Gerald Knight. Sixty years ago, on his 8th birthday, Knight’s parents got him a shiny red JC Higgins Freightliner bike. Decades later he still remembers the bike fondly. “As you get older you reminisce about those things,” says Knight, who lives in Boiling Springs, South Carolina.

Last year Knight purchased a 1960s-era Freightliner, like the one he had as a kid, for $200 online. It arrived in two boxes, and the parts were in bad shape. He shipped the bike to Reidsville Bicycles, and for four times what Knight paid for it, Davis completely refurbished the bike, giving it a candy-apple red paint job, rear rack, whitewall tires, and chrome fenders. “I’m tickled to death with it,” Knight says. “I’ve even had a few people offer to buy it. But it’s definitely not for sale.”

In the 1,000-square-foot shop in downtown Reidsville that he shares with his dog, Crank, Davis completes about 12 restoration projects a year. He puts in about 80 hours for each bike over a one- to three-month period. Most of the vintage bikes he repairs are from the 1950s and ’60s, although he’s had a few with wooden wheels from the early 1900s.

Davis charges anywhere from $1,000 to $2,000 for each restoration project, depending on the job. Certain bicycle parts like bearings and wheels are standard and easy to replace, but it becomes more costly and labor-intensive if the customer wants to keep the original bike intact. In such cases, Davis might have to remove, strip, and paint or apply chrome to numerous parts, such as handlebars, rack, chain guard, and fenders.

Davis says people are so invested in these bikes — both emotionally and financially — because they hold great sentimental value. Many of his customers bring him bikes that have been in their family for decades, and they want to preserve a special childhood memory or pass the bike down to their own kids or grandkids.

“The cost of doing a restoration won’t leave you with a bike worth more than what you put into it,” Davis says. “It’s not an investment. It’s a labor of love.”

Before Bill Davis and his wife settled in Reidsville in 2006, he was a manager at Bicycle Rack, a 30-year institution in Hightstown, New Jersey. For more than two decades the shop has played host to a vintage bike swap meet. The success of those annual get-togethers stuck with Davis when he opened Reidsville Bicycles in 2007, and he now holds his own vintage bike show every fall. On September 29, hundreds of people from across the Southeast will gather to buy, sell, trade, and simply admire these gleaming, souped-up, two-wheeled treasures.

Sam Boykin discovered North Carolina’s thriving vintage bike community after he came across his wife’s childhood Schwinn and decided to have it restored for their 3-year-old daughter.