Nigel Alston rushed form his seat inside the Arts Council Theatre in Winston-Salem and out to the darkened lobby, tears streaming down his face. People whispered: What could be wrong? He was attending an early performance by the North Carolina Black Repertory Company of Black Nativity, a reimagining of the Christmas story by the writer Langston Hughes. Alston continues to see NC Black Rep’s performance of the play every December, but that particular viewing — and a specific song in which an angel sings — opened his emotional floodgates. And the feeling stuck with him. “It gets me every time,” says Alston, who today serves as NC Black Rep’s executive director. “It’s just one of those songs that touches your soul and takes you back to a place in time.”

In 2019, the NC Black Repertory Company unveiled its new Christmas show, Nativity, According to the Gospels. photograph by Larente Hamlin

That place in time could be Winston-Salem 42 years ago, when Larry Leon Hamlin, the son of a Reidsville tobacco factory worker, returned to North Carolina and founded NC Black Rep. As a child, Hamlin loved acting in school plays. He went on to study theater at Brown University in Rhode Island, and later spent time working as a professional actor and director.

Within a few years of being back home, Hamlin’s repertory company gained international attention for its artistic excellence. But the 1980s proved to be a tough time for Black theater. After the flurry of post-civil rights protest theater activity in the 1960s and ’70s, resources had begun to dry up.

So in 1989, Hamlin launched the biennial National Black Theatre Festival in Winston- Salem as a way to help sustain and expand not just NC Black Rep, but also struggling companies in towns and cities across the country. “Black theater was so isolated and fragmented that we couldn’t help but be weak,” Hamlin told The New York Times that year. “But now I believe there is a sense of unity, a sense that maybe we’re getting one more chance. I feel a dedication, a commitment.”

Hamlin’s feeling was right. He got marquee commitment not only from Oprah Winfrey, but also from Dr. Maya Angelou, who agreed to chair the first National Black Theatre Festival. The event drew about 10,000 people to the Piedmont, and in the years since, it’s hosted a who’s who of professional actors and playwrights, including Ossie Davis and Ruby Dee, Sidney Poitier, August Wilson, and Denzel Washington. The festival offers workshops and networking opportunities for budding writers, directors, and actors, as well as for people behind the scenes in lighting, costume, and set design. Whole generations of Black theater workers have gained experience, launched careers, and reunited with friends in North Carolina every two years.

On the final day of the most recent National Black Theatre Festival in August 2019, the streets of Winston-Salem were jubilant. A crowd 20,000 strong, buzzing with electricity, snaked for about four blocks, beginning at the downtown Marriott and ending at the University of North Carolina School of the Arts’ Roger L. Stevens Center. People were decked out in bold African fabrics of complex patterns, each symbol representing a proverb, a story, or a philosophy. Drummers led the procession, pulses of almost visible energy reverberating from their hands. Celebrities mingled with yet-to-be-discovered actors and playwrights, as well as patrons who’d come purely for the love of theater. Some were singing. Everyone was dancing. The procession ended at a bust cast in Hamlin’s likeness.

Hamlin died in 2007, but his dream lives on: The 2019 festival drew 60,000 attendees, with an estimated economic impact on the Piedmont Triad of more than $10 million. But new challenges have cropped up that Hamlin couldn’t have foreseen. Due to the pandemic and other factors, the 2021 festival has been rescheduled for the first week of August in 2022, forcing NC Black Rep to pivot its focus to online performances and events staged by Living Room Theatre, the company’s outreach program, which, during Covid-19, performed socially distanced readings outdoors. 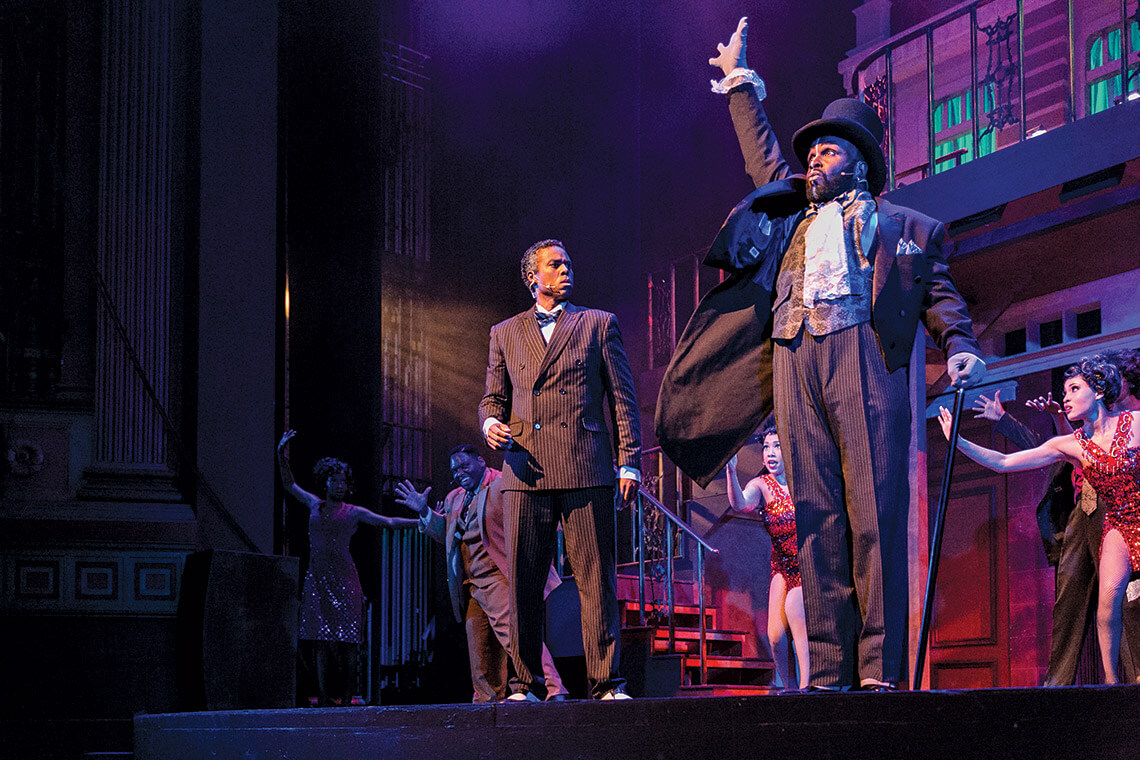 In February, the company began broadcasting plays on a new Winston-Salem-based streaming service, Artarie, a sort of Netflix for theater. “What’s different today is the addition of social media and technology,” Alston says. Still, the physical festival is the heartbeat of NC Black Rep’s mission. “It’s a reunion of the spirit,” Alston says. “It’s like a family reunion.”

Planning the reunion is no small feat. Organizers showcase 30 plays by theater groups from around the world, with a wide variety of performances: one-person acts, musicals, comedies, and dramas. Additionally, there are panel discussions, poetry jams, and press conferences with celebrities.

Jackie Alexander is NC Black Rep’s current artistic director, and he has deep knowledge of the National Black Theatre Festival’s goals and traditions. Back in 2005, when Alexander attended the event for the first time, he was an actor and writer living in New York City. He met Hamlin that year and was impressed by what the festival’s founder had created. “Seeing all these beautiful, art-loving Black people — it’s hard to express the magnitude of it, the energy,” Alexander says. “Walking down the street, anybody might start up a conversation with you.”

By 2016, Alexander had worked his way up to artistic director of New York City’s Billie Holiday Theatre when NC Black Rep tapped him for his current position. Under his guidance, the company has partnered with medical organizations to create a health fair at the festival highlighting health-care disparities in the Black community. NC Black Rep also hosts world premieres, most recently Freedom Summer — based on the Mississippi voting rights project of 1964 — which streamed at 12 universities. Although the pandemic has hit public performance of all kinds hard, NC Black Rep soldiers on, and Alexander sees future growth for both the theater company and the festival. “That’s what the past year has been about: figuring out how to keep connecting and serving the audience,” he says. “The festival is all about communion. It’s more than theater — it’s about the people, and we want to keep growing.”

Even as the North Carolina Black Repertory Company and its National Black Theatre Festival continue to expand, some things remain the same. Like their dedication to uplifting Black stories. Not to mention the impact that those stories have on everyone who attends a play — even if they’ve seen a particular play dozens of times.

Two Christmases ago, Nigel Alston watched his company perform an updated version of Black Nativity, renamed Nativity, According to the Gospels. And like every year since that early viewing, Alston took a brief respite in the lobby, enraptured by the same scene that first brought tears to his eyes so many years ago. The performances have changed over time, and Alston has seen actors come and go, but the spiritual impact of that angel singing continues to resonate for him. “I know that it’s coming, and it’s like church,” he says. “I just get full.”

NC Black Rep’s founder, Hamlin, once said that he would live forever. So long as those angels keep singing and the festival continues to lift Black voices, it seems that Hamlin may have been right.