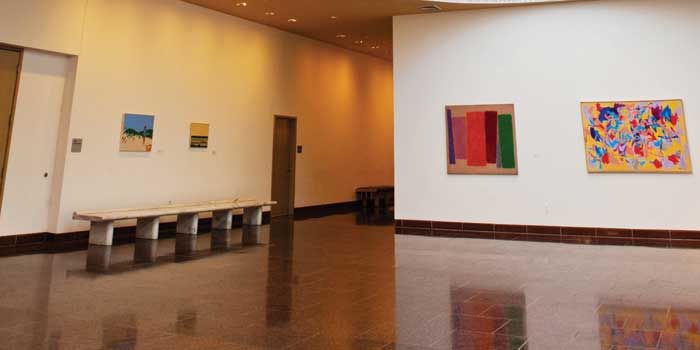 Greensboro interior designer Jane Ellison was on art-buying business in New York City recently when she happened to tell a gallery owner where she’s from.

“North Carolina?” the big-city gallery owner replied. “Do you know about the Weatherspoon?”

“Yes, I do,” Ellison replied, with a mix of gratification and irony. “I’m chairman of the board of the Weatherspoon Arts Foundation.”

For supporters of the museum — home to one of the most significant collections of contemporary art in the Southeast, including dozens of works by Matisse, Picasso, Warhol, and an early de Kooning acquisition that has become the stuff of legends — there is gratification in being well regarded from afar. And the irony? At times, the Weatherspoon Art Museum seems better appreciated in the more distant corners of the art world than in its own backyard.

But times may be changing.

The teaching museum attached to the University of North Carolina at Greensboro, celebrating its 70th anniversary this year with a retrospective and sweeping companion catalog, aspires to raise its profile from what an outgoing board president this spring called “Greensboro’s hidden jewel.”

“I like to think we’re growing out of that description,” says Weatherspoon Director Nancy Doll. She likens the museum to a mirror as well as a bellwether of contemporary art, with the Weatherspoon’s recognized knack for exhibiting up-and-coming artists who turn out to be important.

Still, no single exhibit, nothing on the walls at any given time, explains the question of how a relatively small museum in a midsize Southern city gained a national reputation. The answer is locked away one story down from the Weatherspoon’s six galleries at the corner of Spring Garden and Tate streets, where the underground, maximum-security central vault contains 70 years of accumulated treasure.

It takes a moment for the eye to adjust, not only to the dim light but also to the odd juxtaposition of a priceless art collection residing in an industrial storage room. Row after row of paintings hang unseen on steel racks or sit in wooden crates between fine sculptures covered in rough drop cloths. Weatherspoon curators cataloged and digitally recorded the climate-controlled, fireproof location of all 6,000 works. Items in the collection take turns on display in the galleries upstairs. Or they travel. One of the museum’s prize pieces — the prototype of Willem de Kooning’s groundbreaking Woman series (a visionary acquisition in the museum’s early years) — went to the Metropolitan Museum of Art this month.

The Weatherspoon did not secure its place on the map, or its subterranean riches, overnight. On a campus that was the out-of-the-way Woman’s College, as UNCG was once known, the Weatherspoon goes back to the early art department and a forward-thinking art professor who arrived in 1935, Gregory D. Ivy.

Ivy, an accomplished Columbia University-educated artist, was a modernist influenced by surrealism and the Cubists. At UNCG, he built the UNC system’s first department to award a bachelor’s or a master’s degree in fine arts. At a time when the art world was smaller, Ivy was able to bring noted artists to the campus. Sculptor Maurice Glickman, for instance, anchored the inaugural exhibit at the new Woman’s College Art Gallery in 1941.

The Weatherspoon, named for early art educator and gallery benefactor Elizabeth McIver Weatherspoon, set itself apart in several ways. It was a university-affiliated gallery that served as a classroom for students; it was relentlessly modern in orientation; and it drew upon a growing philanthropic tradition in Greensboro made possible by industry wealth, particularly textiles.

The most dramatic gift in the Weatherspoon’s history shows how small a world it was: Claribel and Etta Cone, two sisters of Greensboro’s Cone Mills founders, frequently traveled abroad, befriending writers Gertrude Stein and Alice B. Toklas. Along the way, the Cone sisters, described in Stein’s short story “Two Women,” amassed a renowned collection of French avant-garde art. They were particularly fond of Henri Matisse, who visited the sisters in their home city, Baltimore, Maryland. They also collected contemporaries, including Paul Cezanne and Pablo Picasso.

Although most of the art that made up the Dr. Claribel and Etta Cone Collection, now valued at more than $1 billion, went to the Baltimore Museum of Art, a second collection went to the Weatherspoon. So it was that a small teaching facility at a women’s college acquired 67 works on paper and six bronzes by Matisse, 27 John D. Graham drawings, and a set of Picasso prints based on the Ballet Russe.

The tradition of honoring the creative artist, while also focusing on modern and contemporary artists, continues to define the museum. “We’re not collecting globally or haphazardly, so that gives us a depth,” says catalog project manager Elaine Gustafson, pointing to the focus on modern American art. “You can’t do every avenue.”

Dike Blair, a visiting artist who had his first show at the Weatherspoon, says the museum’s smaller scale allows the staff to mount a show quickly with a minimum of what he calls bureaucratic bog-down.

“I think it’s a little risky to be the first to do anything, and I’m happy they took the risk,” says Blair, who has since exhibited his work internationally. “I rather doubt that a larger metropolitan museum would or could have taken that risk.”

For art professors teaching at UNCG, the museum supplies endless material. Art historian Porter Aichele, the former department chair, organizes an art history course by giving the museum registrars a checklist of works available, which the students then study up-close in the gallery, rather than experiencing great art only through one-dimensional slides or photos.

Earlier this summer, among the idle works in the cool of the central vault, the mythical de Kooning rested between shows. Today, it is a priceless work of art, a key to the abstract Expressionist’s career. But when the Weatherspoon paid $1,800 for Woman in 1954, the painting shocked the campus and community with its new style, distorting the female form with a ferocious energy.

At that critical moment, faced with controversy and derision, founding art department chairman Gregory Ivy made a statement that casts a long shadow over the Weatherspoon legacy. According to Gregory D. Ivy: Making North Carolina Modern by art historian Will South, Ivy took the de Kooning to his office in the McIver Building and hung it across from his desk. And there it stayed, for years, a stubborn testament to a museum that had what money could not buy: an eye for what is new.

Lorraine Ahearn is an award-winning columnist and reporter and author of The Man Who Became Santa Claus and Other Winter Tales. Ahearn is a Roy H. Park Fellow in the School of Journalism and Mass Communication at the University of North Carolina at Chapel Hill. She lives in Greensboro.