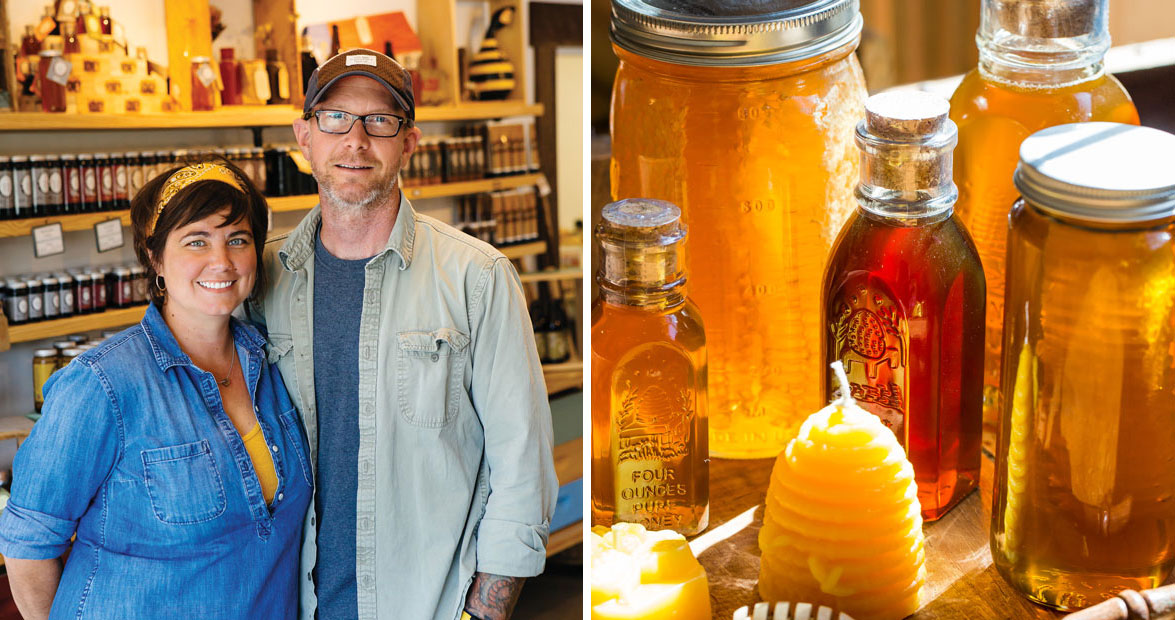 At first glance, the pastel-colored boxes seem out of place in the rolling green hills of Graham County. But approach the columns of containers, stacked atop one another like wooden shoeboxes, and you’ll hear a gentle buzz. On a honeybee farm in Robbinsville, that’s a very good sound to hear.

These days, husband-and-wife team Aron and Jessica Wehr hear that buzzing a lot. Following a move from Pennsylvania, which they thought would be temporary, the Wehrs settled in Robbinsville in 2010 with their two young daughters. Their first Christmas in North Carolina, Jessica asked for a couple of beehives as a gift. Aron dutifully bought them for her, never expecting that raising bees and making honey would amount to anything more than a hobby, but it quickly turned into an obsession for both of them. Soon, the Wehrs had a few more hives, a little more honey, and a little more money. After just one year, Robbinsville — and honeybees — had the family hooked.

As their honey sales increased, the Wehrs, who were making honey products in their basement, “decided to go for it,” Aron says. In 2013, they started their company and, playing on the word “heirloom,” called it Wehrloom Honey. With a loan from the U.S. Department of Agriculture, they were able to buy more hives and equipment to become bona fide bee farmers.

Aron and Jessica soon found themselves driving to farmers markets in Murphy, Bryson City, and Hayesville to sell their raw honey. The popularity of their products made them busy as, well, worker bees, and by 2015, they were on the road so often that the couple figured it was time to build their own store.

What started out as two beehives has grown into hundreds of colonies and more than 30 million bees. The hives are scattered around Graham County, with roughly 30 on the hill behind the Wehrs’ farm store. Throughout the summer, when wildflowers cover the mountains, bees swarm the boxes as they fill them with honey.

To make honey, Bees fly off to flowers and trees, gathering nectar from blossoms and storing it in their special stomachs. When full, they zoom back to the hive. Hive boxes, like the ones at Wehrloom Honey, contain trays onto which the bees construct their famous hexagonal pattern of wax cells. Once back in the hive, the bees pass their nectar to other worker bees, who eventually deposit it into the hive’s honeycomb, fanning it with their wings until most of the liquid has evaporated. Then, they seal the pockets with their beeswax to keep the honey clean, allowing beekeepers like Aron and Jessica to come along and bottle the stuff. (Bees do eat the honey themselves, but fortunately, they make enough to share with the rest of us, too.)

Honey isn’t one-size-fits-all; different blooms create different hues and tangs. And while plain honey is delicious enough, the Wehrs like to get creative: They make honey flavored with cinnamon, spun with vanilla beans, infused with chamomile, even spiked with hot peppers. And in addition to their tastier offerings, the Wehrs also harvest the hive’s wax to make candles and soap.

Today, Wehrloom Honey’s shelves are crowded with jars of honey, bottles of lotion, bars of handmade soap, and tubes of lip balm. You can even belly up to a small wooden bar to sample the Wehr’s newest venture: mead.

Considered the “drink of the gods” by the ancient Greeks, mead is wine made by fermenting honey with water. And the Wehrs see a lot of modern promise in this sweet beverage. “It’s sort of where I see our business moving,” Aron says. Putting their mead on tap has also made Wehrloom the first official winery in Graham County. On tap: Dry County Dry, Black“bear”ry, Pretty in Peach, and Appalachian Apple.

A short pathway surrounded by wildflowers will take you to the farm’s honey observatory. There, you’ll find a behind-the-scenes look inside a hive. Even for the Wehrs, seeing the bees in action is special — they’re a living reminder that a lot of hard work can create something divine. “I wouldn’t trade this for anything,” Aron says.