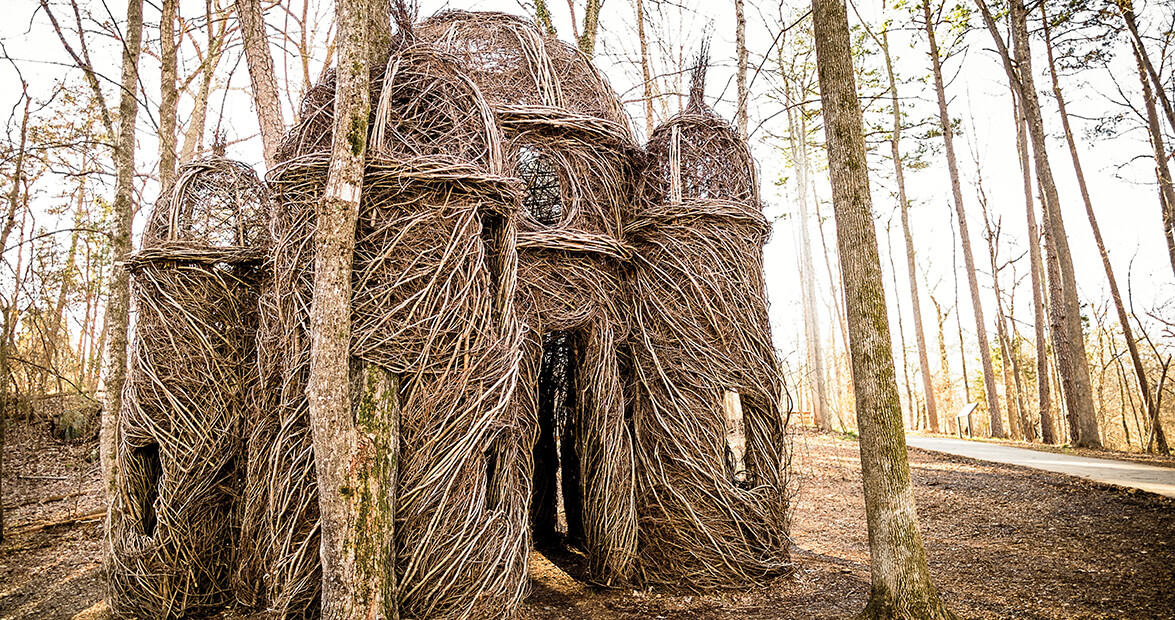 First you scrawl, then you scribble, and then come the crayoned stick figures. They stand beside a house or beneath a round, yellow sun. Later, with hangman, they entertain you during church sermons. Stick figures teach you when it’s safe to cross the street. On a car’s rearview window, they tell you about the family inside. No matter how old we become, stick figures never walk out of our lives. They’re the only universal, wordless, and often whimsical, language.

Take a stroll along the Eno River, on Hillsborough’s Riverwalk, and this immense thing appears. It isn’t quite a building. Not quite a structure, either. It looks like a miniature Taj Mahal, or something you’d come across on the Russian taiga, a handmade abode of gathered wood, yet with the turrets and domes of the Mongolian empire. The domes are crowned with vertical tufts of sticks. But this is no mere pile of sticks. It’s a sculpture. On scaffolding or ladders or on their knees in the dirt, four people are silently clipping, snipping, and curving sticks.

The stick man, as he’s often called, is standing on scaffolding, stuffing a stick into the sculpture. White-haired, wearing battered jeans and thick gloves, he bends a four-foot branch, tucking its ends into the curving tangle over a doorway. He’s Patrick Dougherty, the sculptor behind the sculpture, who lives down the road near Chapel Hill. He’ll complete his creation today, three weeks to the day from Day One. 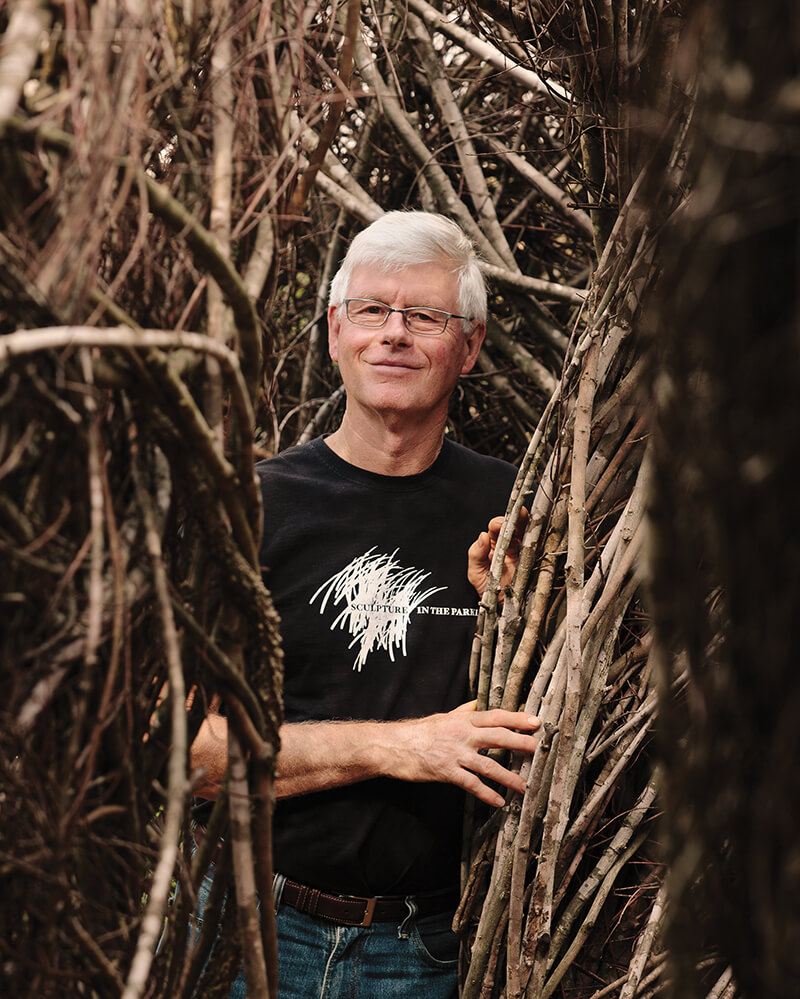 Patrick Dougherty, and the Taj Mahal-like structure he built by hand in Hillsborough. Portrait by Briana Brough.

“You look for line quality,” Patrick says, reaching for another stick. This spare utterance seems a small prescription for this incredible structure. Intersecting and crisscrossing and overlapping thousands upon thousands of sticks and twigs and branches, whose diameters range from ivy-vine thin to nearly two inches, have been woven to create an 18-foot-high structure complete with windows, doors, five turrets, and a central room.

But Patrick is a spare, simple, soft-spoken guy, who doesn’t look like the internationally famous artist he is, an eminently practical person whose creative energies are tuned to whimsy, movement, and what a particular site inspires his mind to build. “Sourcing is important,” he says. Money may not grow on trees, but sticks do, and he needs multiple loads selected and trucked in from a prearranged location. The species matters, too, depending on the part of the country — or the world — he’s in. In the South, he prefers red maples, sweetgum, elm. No pine, please. Too brittle.

For the Hillsborough Riverwalk sculpture, six loads of saplings came from Ayr Mount, the nearby Federal-style estate/plantation. Once at the site, that same day, they’re stripped of greenery and superfluous branches by many hands making light work. Because volunteers are part of practical Patrick’s vision. And they clamor to participate. More than 190 people have had a (literal) hand in the Hillsborough sculpture, and the Arts Council, which is sponsoring the stick man, had to turn away more.

Patrick, now 70, has been sculpting with sticks for 30 years. After attending the University of North Carolina at Chapel Hill, he earned a graduate degree in health administration from the University of Iowa, became an administrator with the Air Force, and wound up working at a social agency in South Carolina. Having always been handy and a competent carpenter, he decided to build a house from the ground up in the early ’80s, and moved back to Orange County to do so. With this decision, his life trajectory began to change, and changed again when he returned to UNC for courses in sculpture and art history. For the student art show, Patrick created a stick sculpture titled Maple Body Wrap, which resembled an archaeological object — mummy-like, in which a human body could fit. Galleries came calling. For SECCA, in Winston-Salem, he sculpted figures sitting in chairs. It’s decidedly delicate stick work. But, he says, he knew he “wanted to build big things.”

Like many of us, he hasn’t forgotten the longings and delights of childhood. Call it “being in touch with your inner child” if you like, but, as Patrick says, “I think throughout our life we’re seeking our childhoods.” Yes, that desire for a personal space or hiding place: a kingdom, an enclosure. It begins with a blanket thrown over a card table, progresses to a playhouse in the backyard, and on to a fort in the woods.

Intriguingly, and regardless of the fact that many of Patrick’s sculptures have an architectural sensibility, none have sharp corners. “Stick-straight” isn’t a term that applies because, even from a distance, you feel the movement, a word Patrick uses often. The “lines” are swirling, tornado-like, curving, reaching — and leading the eye — upward. They travel. Nothing feels or looks stiff, static, or even particularly stable. But they are. Go ahead: Lean, push, heave. Even if you’re the Big Bad Wolf, you can’t blow this house down. That’s partially because, at the outset, holes are dug for larger supporting sapling stalks, and they’re filled with gravel. Existing trees are incorporated into the plans drawn on the ground, and “reinvested” as part of the structure. Or, as Patrick puts it, “There’s a constant interplay between the site and the structure.” 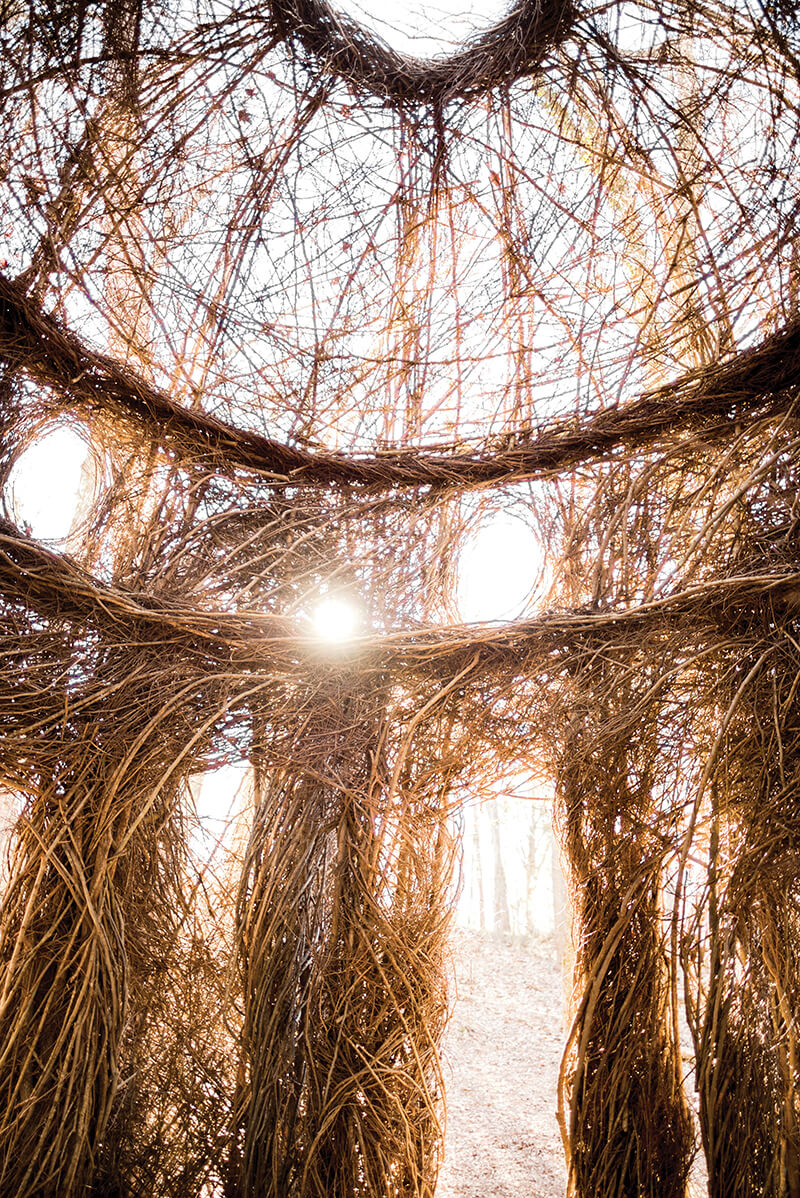 “Aesthetics come next,” he says. Start swirling. Start “laying the line.” Start “folding, pell-mell.” “Folding” in this case means working in a stick, winding it behind another. And in the way that a drip castle on the beach grows larger and more complicated with every added sandy droplet, so does a castle in the woods grow larger and sturdier with every additional stick and sapling.

Although every sculpture is named, “We like to stay a little vague,” Patrick says. “We don’t want to overwhelm, or be presumptive, or tell people how to view it.” Someone might see a bird’s nest where someone else might see an indigenous tribe dwelling, or a trio of leaning jugs, or open mouths. Sometimes they’re mere “follies,” related to the nonsensical buildings once constructed on the estates of wealthy landowners in England and Scotland. Hillsborough’s Riverwalk sculpture is titled “A Sight to Behold,” not only because the phrase is a typical Southern colloquialism, but because that’s what people who came upon it during its creation often exclaimed, unsure whether to enter, investigate, or just stand and gawk.

The tallest sculpture Patrick built was 50 feet, in Ireland, a logistical challenge that required cranes and bucket trucks. The largest was in France, “a big extravaganza” of a 16-room walk-through labyrinth, which was perfect for its locale: the grounds of a castle. “The scale of the piece is really important to the overall effect,” Patrick says. “You can’t overwhelm the situation.”

He works 12 months a year, in every kind of weather. And each sculpture, no matter the size, takes three weeks. “The project needs boundaries,” he goes on. “You wear out your site, your workers.” And one of the bonuses of Patrick’s sculptures is that they wear out. Wood is organic, after all, and after two or three years, the pieces begin to look disheveled. Eventually, they all come down.

I stand inside, gazing upward at the “roof,” a delicate tracery of the web-like ceiling, the sticks like fretwork overhead, and remember how, deep in a locked drawer, I kept a loose-leaf notebook of a story that concerned a 10-year-old who lived in the woods, on berries and creek water and squirrel meat. She spent a lot of time sharpening sticks and making fires. Protection from the elements was an early plot problem for the 10-year-old girl who was writing it. This stick house, which would have served Snow White’s seven dwarves or Oz’s munchkins equally well, would have suited my woodland child perfectly.

Patrick is unconcerned about endings. After Hillsborough, he has other projects lined up in Florida and Georgia, and site visits planned for other communities. Here, though, he stands among the clippers and pruners that litter the fallen leaves, and bites into a bagel. “They’re playful and immediate,” he says of his whimsical, winsome, fantastic creations. “This was like a little temple that stands in someone’s garden.” He puts on his gloves, and turns. Because even as the scaffolding is coming down and the ribbon-cutting is being planned, there’s still work to be done: bending and twining and poking and coaxing and curving and clipping. Best get on with it.