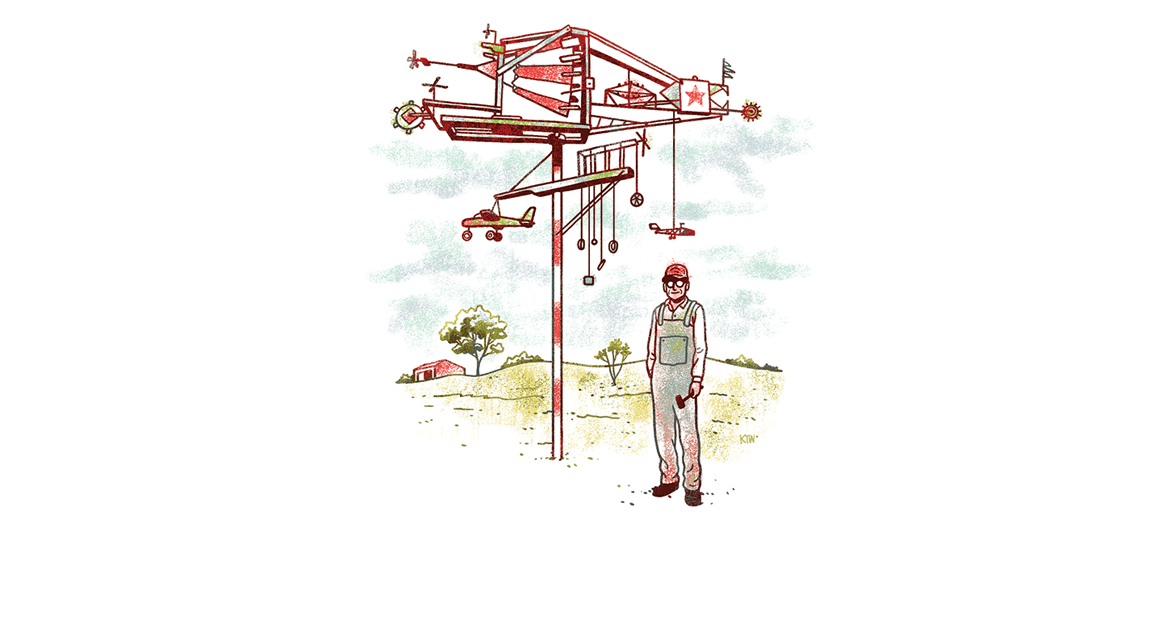 Rocket school. That’s what I keep thinking as I’m peering over the fence at what remains of Vollis Simpson’s windmill farm in Lucama, trying to steer clear (enough) of the KEEP OUT and POSTED signs. It’s what I’m thinking a little later, in Wilson, at what will be the Vollis Simpson Whirligig Park. I’m standing directly beneath one of the first few fully refurbished pieces, V. Simpson, a 55-foot-long whirring dream machine of fan blades and bicycle wheels and a piece of what might be a crane boom and hand-cut scrap-metal stars and hundreds of playing-card-size fragments of old highway signs. Rocket school.

The night before, trying to convince our 4-year-old to eat snap peas, we told him that if he ate them, he’d grow tall right away (a lie; we are not tall people). “Oh, yeah!” he said. “And then I can be an astronaut, and I won’t even have to go to rocket school!”

Vollis Simpson did not have to go to rocket school. Or art school. He just made windmills. Whirligigs. There seems to be some dispute about what to call these things, which is no surprise. It’s hard to name what’s hard to describe.

Imagine a union between a weather vane and a Ferris wheel. Or a carousel and an eggbeater. Imagine the offspring of said union, writ or wrought about as large as possible and made of nearly any reclaimed material you can think of. “Those are ice cream scoops,” Joe Justice tells me, impromptu-touring me around the downtown Wilson shop where many of the Simpson windmills are under repair. Justice is a woodworker, remaking fuselages for the madcap airplanes that ride the edges of so many of these pieces. He keeps pointing things out: “Those are wine chalices with the stems cut off. That’s an old Texaco sign. That’s the gearbox from a ’55 Ford.” Justice and several other folks are restoring the windmills to their original glory; most arrived rusted and rotted nearly beyond salvage, suffering from years of exposure out on the farm.

There are horses and wagons, trains and dogs, Christmas trees and Stars of David. Everything spins, everything moves. Everything’s littered with reflective fragments. On whiteboards all across the shop are running lists of items needed to complete the various restorations: toaster oven racks. Tricycle handlebars. A “How Y’all” sign for a Christmas tree. A 10-foot two-by-four for Milkshake America.

Vollis Simpson’s whirligigs were named North Carolina’s state folk art in the same piece of legislation that also designated the state fossil, frog, salamander, marsupial, and art medium. From what I can gather, Simpson, who died just before the bill passed in 2013, would have liked the mess of that, the catchall nature of it, maybe more than he’d have liked the kinds of conversations that attend to his craft. A folk artist, after all, can draw a tough lot: You plug along, feeling mainly like what you’re doing is making true use of things nobody else has use for any longer — grease tubs, fire buckets, tractor wheels — and then some whippersnapping kid back-pocketing a newly minted Ph.D. turns up and calls you a capital-A Artist.

Simpson didn’t even start building these things in earnest until he was 65. Probably he’d have liked some help digging, by hand, the 10-foot-deep holes it takes to support anything of such size. Probably he wasn’t terribly keen on any discussion regarding his visionary, grand-scale reimagining of turn-of-the-last-century mechanical toys. Probably he wanted to just keep making, keep setting his windmills out in his pasture, regardless of who laughed or didn’t laugh, regardless of who lined up to pin fancy names on what he was up to. “When I got something to do,” Simpson says in one documentary, barely looking at the camera, “I work all day. Get tired of it, I start something else.”

There are Vollis Simpson pieces all over the country — by the end of his life, he had become something of a rock star in that capital-A Art world — and there’s one currently in my hometown, Joe Justice mentions on my way out the shop door. It’s on loan to a hospital. He says I should take a look when I get back. So I do. I pack my rocketeering son in the car and drive not three miles down the road and there, in the parking lot, is Saw Dog. It’s maybe 15 feet off the ground, maybe 20 feet long. When the huge red fan on the front spins, two men draw a saw across a log, and a dog, watching, wags its tail. The dog is made of steel stair treads. There’s no wind.

“We could just blow,” my son says, not taking his eyes off it. Then he starts doing exactly that, and a little breeze comes up to help, and suddenly it’s all in motion, and my normally chatterbox of a kid is struck silent, watching. Though this piece features no airplanes, all I can think now is “First in Flight,” that little tagline stamped across our license plates, and how right Simpson got it, and kept getting it. I don’t have any idea what these things are. I don’t know what they tell us about ourselves. I just know I want the wind to keep blowing.