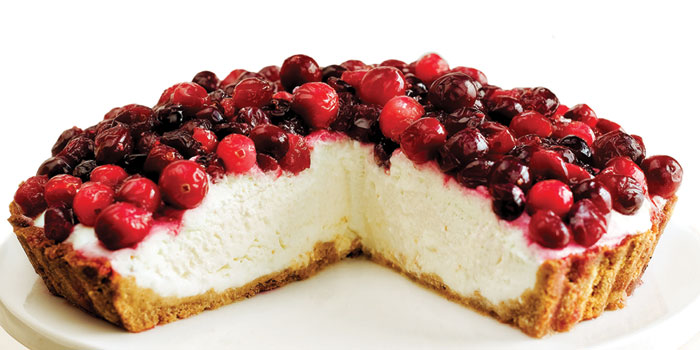 For the topping:
2 cups fresh cranberries
½ cup plus 2 tablespoon granulated sugar
juice of 1 orange, about 6 tbsp

Preheat oven to 375º. In the bowl of a food processor fitted with the blade attachment, process graham crackers into crumbs. Drizzle in melted butter with the motor running; stir in egg white by hand. Transfer filling into a greased 9-inch fluted tart pan with a removable bottom that’s been lined with parchment paper. Press crust into the base and up the sides of the pan.

Bake until set and golden brown, about 20 minutes. Let cool to room temperature while preparing filling.

In the bowl of an electric mixer fitted with the paddle attachment, beat cream cheese, vanilla, and orange zest together until combined and smooth. Next, melt white chocolate chips in a microwave-safe bowl in 30-second increments until melted. Beat melted chocolate into cream cheese. Transfer mixture into a separate large bowl, and clean mixing bowl. Set bowl back into place on electric mixer, and fit with the whisk attachment. Whisk together heavy cream and powdered sugar starting on low speed and increasing to medium-high speed until stiff peaks form. Fold whipped cream into cream cheese mixture. Smooth filling into cooled graham cracker tart. Let chill for about 2 hours or until set.

When ready to serve, make the topping. In a small saucepan set over medium-high heat, combine cranberries, sugar, and orange juice. Cook, stirring occasionally, until bubbly, about 8 minutes. Reduce heat to medium-low, and cook until thickened, about 3 minutes. Let cool to room temperature before topping tart.

This recipe by Charlotte Fekete first appeared in the December 2008 issue of Our State. print it