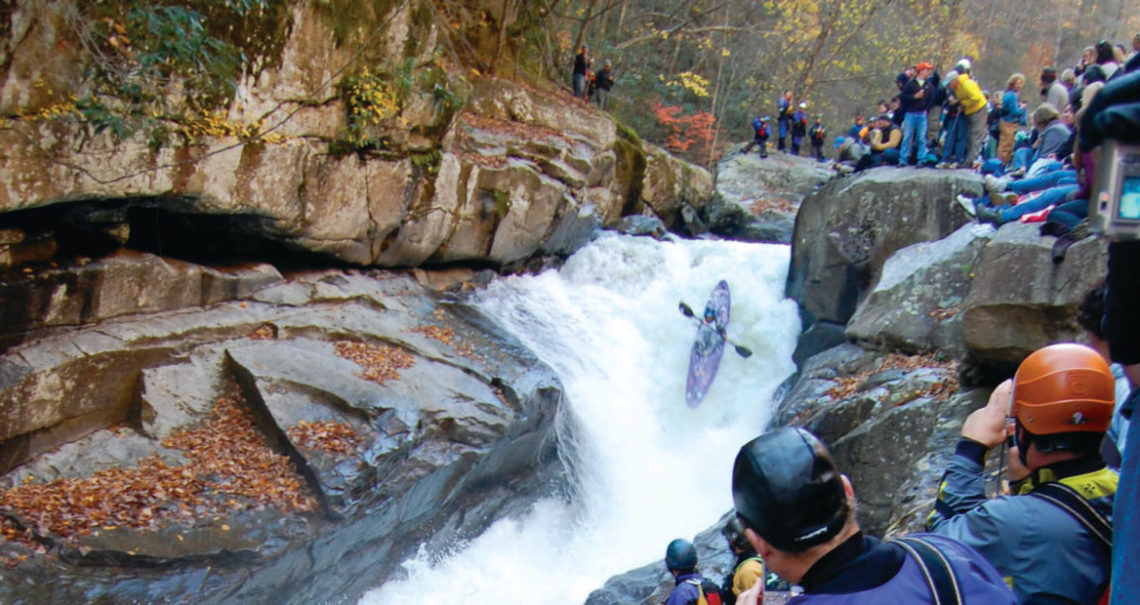 Looking like red, yellow, or lime-green waterbugs, kayaks approaching the thundering waterfall and its massive rock-walled frame momentarily teeter on the edge. A split second later, they shoot downward into the flume of Gorilla, the most ferocious rapid on the Green River.

Some kayaks partly vanish into Gorilla’s spindrift, then bob up in the churning waters 25 feet below. Some careen off rock slabs or submarine through the turbulence.

The whipsawing water flips others. River guards throw safety lines, swim out to right the upside-down kayaks, or drag gasping paddlers ashore. This is the Green River’s carnage corner.

Hundreds of spectators line a palisade of rocks above Gorilla’s tumultuous drop. Over the rapid’s roar, they clap, pump fists, shout encouragement to the boaters, and cheer rescues.

Kayakers who stay upright in the fire-hose torrent face more back-to-back rapids. There’s no time to catch a breath. They windmill their double-bladed paddles through Scream Machine, Power Slide, and, finally, Rapid Transit. Then it’s time to relax. For 131 racers in 2009, Rapid Transit marked the finish line of the 14th annual Green River Narrows Race.

The race is one of North Carolina’s most spectacular but least-visible competitive events. It’s hard to get to its location in the Green River Gorge. Each year, on the first Saturday in November, push-the-limit kayakers (and a few canoeists) descend into the gorge in Henderson and Polk counties. They’re here to test their boating proficiency on some of the most intense whitewater in the East. One of the organizers, John Grace of Asheville, describes the event as the “hardest, most extreme kayak race in the world.”

But the race is more than river running. In 2009, some 1,000 fans came to the gorge about 25 miles southeast of Asheville to root for paddlers, picnic on huge boulders, and socialize with friends. It’s a Whitewater Woodstock, a convocation of river buffs in a 900-foot gorge so deep that, in fall, the sun doesn’t shine on this part of the river. Paddlers pay no entry fees, win no cash awards. Admission is free; fans must hike in two miles and, for the last 50 yards, grip ropes tied to trees, half rappelling, to keep from sliding down the steep, muddy slope. “This is a community event, it’s not about winning,” said kayaker Adam Secrest, 25, of Charlotte. “It’s about bragging rights.”

Among whitewater paddlers, the Green is known as a “steep creek.” Steep creekers seek out low-volume streams with daredevil rapids. They’re usually runnable only in periods of high rainfall, such as in winter and spring, but become too “bony,” or rock-ridden, in low water. But the Green has become a steep-creekers’ favorite because it’s a dam-controlled river. Duke Energy generally operates the Tuxedo hydro plant upstream and releases water more than 300 days a year. That’s enough for kayakers to catch the flow through the constricted gorge. “People from all over the country move to Asheville because this river runs so much,” said Secrest, one of six hand paddlers in the race.

The land alongside the gorge is a state-owned game land. It once was the domain of hunters and anglers. The first descent by kayak didn’t occur until 1988. Guidebook author Leland Davis of Swannanoa organized the first race in 1996 with 16 paddlers. They included pathfinder Shane Benedict, now part owner of Liquidlogic Kayaks in Hendersonville. “This is the river where paddlers progress, where they cut their teeth,” said Benedict, 44, of Flat Rock.

The gorge consists of a dozen monster Class IV and Class V rapids. They carry fanciful — and fearful — names such as Frankenstein, Go Left and Die, and Gorilla. Class IV and V rapids are among the most difficult ones on an international classification scale that runs from Class I (moving water and riffles) to Class VI (so violent as to risk death).

Gorilla is the signature centerpiece of the Narrows and, as one might imagine, the race’s mascot. The Green River Race information web page displays a King-Kong-like character astride the rapid clenching a kayak in each hand.

For non-paddlers, just contemplating going ape by going over the rapid could bring on cardiac arrest. Above the lip of Gorilla, the river is squeezed into a rock slot four feet wide. As the current sweeps kayakers through, paddle blades clattering against the rock can be heard over Gorilla’s boom. A second later, paddlers succumb to Gorilla’s tidal-wave-like embrace.

Green racers may appear to be reckless given the dangers, but they’ve honed their skills on the river. Many have run the Narrows hundreds of times. Organizers say racers have suffered no life-threatening injuries, although bruises, concussions, and shoulder dislocations occur. Racers sign a waiver that includes this not-so-subtle disclaimer: “I understand that many people consider speed in paddling rivers of this nature to be foolhardy. I have been warned of the stupidity of this activity … and participate anyway.”

Clambering up the mist-slickened rocks may be even more dangerous. In 2008, one spectator slipped and broke her leg. Three others fell into the river but were quickly rescued. The safety measures and the laid-back crowd impressed Ken Cote of Suwanee, Georgia. “Despite the hardships of climbing down into the gorge, everybody is chilled out,” said Cote at the 2009 race.

The race course spans 0.65 of a mile between Frankenstein and Rapid Transit. Paddlers take off in one-minute intervals. The 2009 race hit high-water marks in several categories: Number of paddlers competing (131); the largest crowd (estimated at 1,000); overall fastest time ever (Andrew Holcombe, 28, of Asheville, 4 minutes, 18 seconds); and fastest time ever for women (Adriene Levknecht, 21, of Flat Rock, 4:59). Paddlers came from as far as the Czech Republic, Germany, and New Zealand. “It doesn’t hurt that this river is probably the most famous creek run in the world,” Benedict said, noting that Gorilla’s reputation has spread through YouTube videos.

New Zealander Rachel Curtis spent a month in North Carolina paddling rivers preparing for the race. “It’s a challenging river just to paddle,” said Curtis, 25, an outdoors instructor from Nelson. “It’s the toughest I’ve ever raced. It’s awesome. It’s so accessible for a grade 5 (Class V) river. It’s awesome.” As for Gorilla, “you come off the drop, and you don’t know what’s going on.” Her time was 6:38 for 128th place.

“I was just as nervous here as I was in the Olympics,” said McCandless, 28. “What got me going was the crowd. Once you hear that crowd, you get all the adrenaline you need.”

McCandless finished seventh with a time of 4:39, just two seconds behind his buddy, sixth-place Fergus Coffey of Mount Holly. Both teach kayaking at the U.S. National Whitewater Center in Charlotte.

Grace, the race organizer from Asheville, stressed the grass-roots, community-on-the-water character of the race. “This is the Super Bowl of kayak events,” he said. “What makes this so special is the Green River. It’s a celebration of the place, the river.”