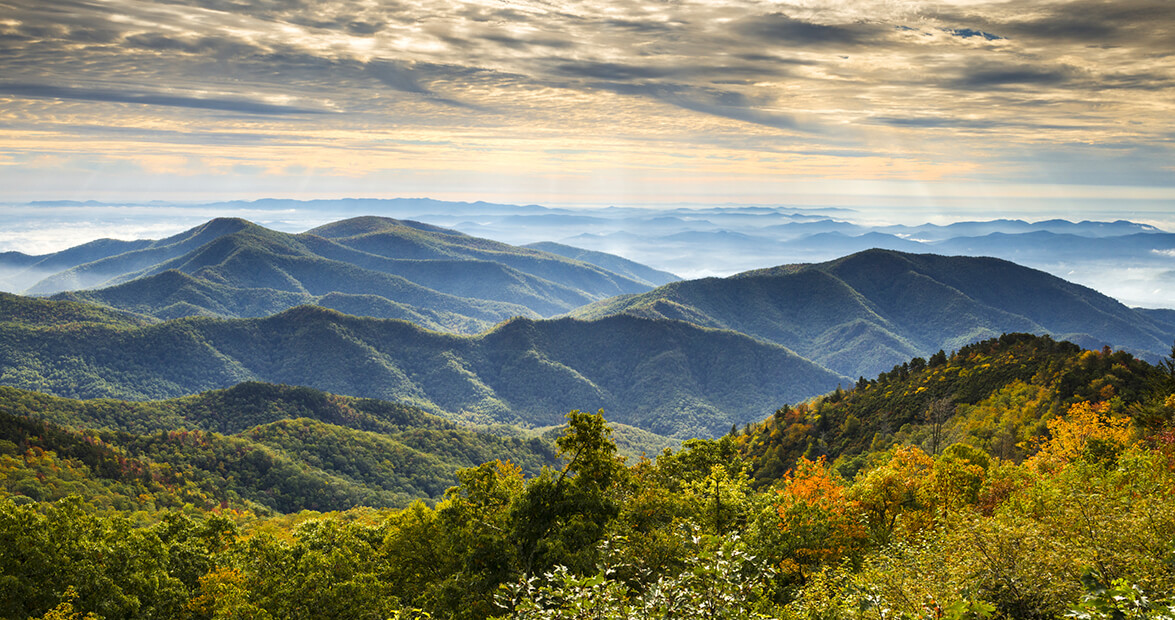 The Curious Carolinian is a web series that answers questions about the quirks of living in North Carolina.

We’re not the only state that can lay claim to the Appalachian Mountains. We know this. From Georgia to Maine, there are 13 others that can do the same, but even still, we want to feel special.

What some of these other states don’t have, though, is the Blue Ridge, a magnificent — and we’ll say mystical, too — segment of the sprawling mountain range. The Blue Ridge Mountains traverse eight states, dipping slightly into South Carolina and Georgia, and extending as far north as Pennsylvania. But North Carolina and Virginia can call dibs on more of the Blue Ridge’s peaks and valleys than any of the other states can. (To further distinguish ourselves from our neighbor to the north, we’ll subtly mention the fact that the highest peak along all of the Blue Ridge is Mount Mitchell, in our own Yancey County.)

But what makes the Blue Ridge Mountains unique is not just that they’re here; it’s the magic they hold. Well, something that feels like magic, anyway.

Remember those weeklong family vacations on the Blue Ridge that you took as a kid? Remember what it felt like to finally pile out of a hot station wagon or minivan after hours of your brother repeatedly elbowing you in the stomach “by accident”? Remember that pinching feeling that you’d never get there, that you’d turn 13 before you’d see the outside of a car again? But then, all of the sudden, you’re here. You have just spent what felt like forever in the car, but gazing at this view, you realize how wrong you were because this, this is what forever looks like. And this is what forever is: endless crests and crowns, all varying shades of soft blue, enveloped by a translucent haze. Forever, you decide, is where you want to be.

If you’ve wondered what gives the Blue Ridge Mountains their distinctive hue, you’re not alone. People have done so for centuries. The Cherokee Indians referred to the mountains as Sa-koh-na-gas, meaning, of course, blue. Over the years, the Blue Ridge has won the admiration of George Washington, Thomas Jefferson, and millions of people who have driven along its scenic parkway. And knowing the science behind this natural phenomenon only makes the mountains’ blue appearance more wondrous — even to scientists.

Take Jonathan Horton, an associate professor of biology at the University of North Carolina at Asheville. Horton holds a doctorate in forestry and specializes in plant physiology. He loves these mountains.

“I think they’re fascinating because they’re some of the oldest mountains in the world, and they harbor a very high biodiversity for a temperate forest,” Horton says.

To understand the color blue, he suggests looking at all of the green. The trees whose heights we admire and whose scents we crave produce “volatile hydrocarbons,” which sound more ominous than they actually are. Don’t be afraid; they’re just organic hydrogen-carbon compounds that can be found in many places, such as crude oil.

One such hydrocarbon is isoprene, which is emitted by trees as a way to protect themselves from the stress of excess heat, especially on summer days. After it’s released into the air, isoprene interacts with other molecules in the atmosphere, creating the distinctive haze that’s made the Blue Ridge Mountains famous.

To discover why this haze appears to be a certain color, we have to go back in time to sixth-grade science class, when we asked loaded questions like, “Why is the sky blue?” and “Why is the ocean blue?”

Mountain ranges, the sky, the ocean — none of these are truly blue. We simply perceive them to be that way.

The light from the sun is made up of all the colors of the rainbow. By the time the sun’s rays reach the earth, they’re scattered. The wavelength of each color is different, and because blue has shorter and smaller waves, they’re the easiest for the receptors in our eyes to detect.

It’s no different from what you’ve probably heard before, but this primer about visible light doesn’t quite explain why it’s just the Blue Ridge Mountains — and another mountain range in Australia — that are blue, not all mountains. If many trees produce isoprene (there’s that tricky word again), then wouldn’t that make all mountains appear blue?

The answer depends on exactly how much isoprene these trees are producing, Horton says. Isoprene-happy oak trees are plentiful in our neck of the woods, compared with the rest of the Appalachian Mountains.

“Red maple, which is actually spreading in abundance and displacing oaks in a lot of places, produces negligible amounts of isoprene,” Horton says. “It has a different mechanism for thermal tolerance.”

Oaks have been facing decline for years, but western North Carolina still is a stronghold.

“If that happens here and we get a species shift away from oaks, then our Blue Ridge Mountains might not look as blue,” he says.

When it comes to nature, it’s not so easy to get a forever guarantee. We can only make a commitment to be kind to the mountains that have been so kind to us. We’ll continue to surrender our breath to these awe-inspiring blue vistas that are all our own. And we’ll count our blessings that we get to live here, a place of such profound beauty.