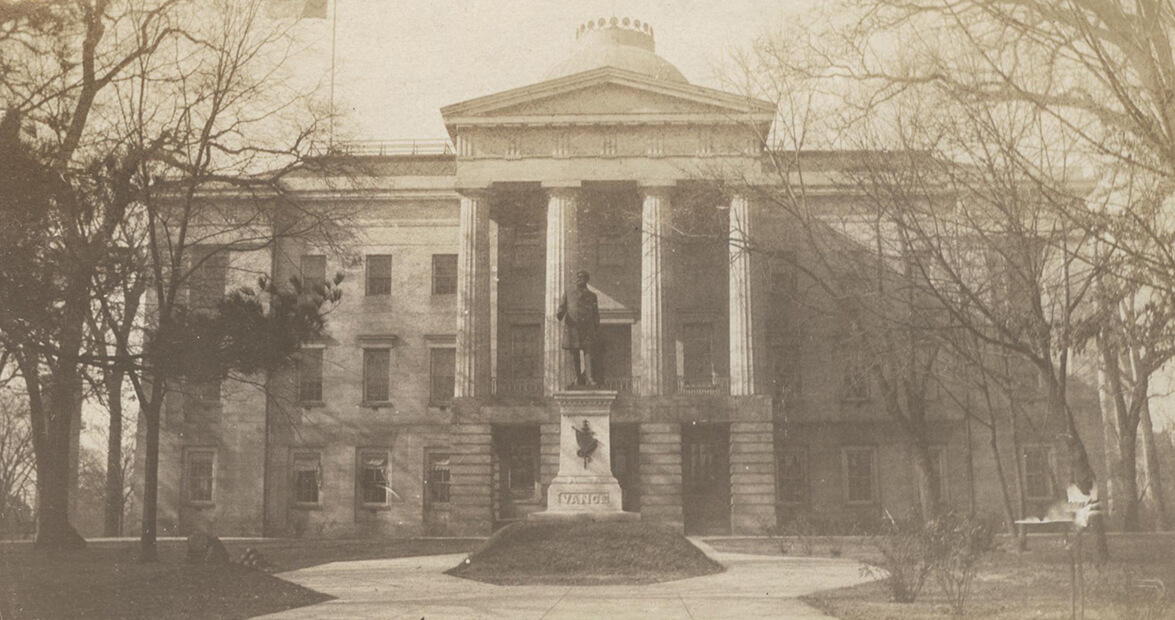 As a kid, everything seems to go on forever.

I remember feeling that way in elementary school, particularly when my Girl Scout troop visited the North Carolina State Capitol. I don’t remember too many — okay, any — facts from our tour that day, but I recall gawking at the rotunda that was so much taller than I was and dreaming up impassioned dialogues between the marble busts.

I also remember thinking about how long ago the capitol building was built and how clearly the year 1840 = forever ago. (That same mentality is probably what led to my younger brothers and me giving our dad the nickname “Fossil.” He was born in 1961. Sorry, Dad.) When you only have eight years of experience in, well, life, it’s hard to imagine a world in which you weren’t present to witness its changing. I gathered that since the capitol building had been there my whole life, since 1992, it had to have been there forever.

For a long time, I believed our capital was always located in Raleigh. Must’ve been sick that day in the fourth grade when they taught us that Edenton and New Bern both served as the capital, back when the state was still a colony. (It was that, or I had mentally checked out at this point in the school year, still reeling in embarrassment after I mistakenly pronounced Plymouth as PLY-mowth aloud during what became the most humiliating popcorn reading session in the history of ever.) But as it turns out, I wasn’t the only one to jump to that incorrect conclusion.

New Bern’s location on the water made Tryon Palace vulnerable to attacks by British ships during the Revolutionary War. The capital needed to be relocated, but the question was where.

Today, the answer seems so simple: Raleigh. It’s a bustling, centrally-located city with strong ties to education, research, and business. But Raleigh wasn’t always that way, and as it turns out, arriving at that answer was a lot more complicated for commissioners charged with the job in the late 1700s.

At that time, Raleigh was simply a sprawling oak grove, says Ernest Dollar, director of the City of Raleigh Museum.

Once the Revolutionary War began in 1775, New Bern was still technically the capital, but in order to elude the redcoats, the legislature conducted its business by rotating among six different locations.

Imagine the frustration of a concerned citizen who traveled all the way to Hillsborough to voice his or her concerns, only to find out this particular meeting was being held in Halifax. It went on this way until Raleigh was officially decided upon in 1792. The whole thing got so ridiculous that even George Washington took notice.

During his two-day visit to New Bern in 1791, the debacle was the topic of conversation, which prompted Washington to mention the matter in his diary, according to History of Wake County by Elizabeth Reid Murray.

Many people thought one of the towns the legislature rotated among was well suited to become the capital. Chiefly among the contenders was Fayetteville. It was the commercial hub of the state and had something Raleigh certainly didn’t: a navigable body of water, the Cape Fear River, running through it.

When Raleigh was chosen, those in Fayetteville and pretty much everywhere else were none too pleased.

It didn’t help Raleigh’s case when a legend began to circulate about how commissioners settled on the City of Oaks when relocating the capital.

As the story goes, a Wake County man named Isaac Hunter owned a tavern where he prepared a mean cherry bounce, which is a sugary, brandy-based cocktail. It became such a popular meeting spot that it was determined at the Hillsborough Convention that the new location of the capitol building must be within 10 miles of Hunter’s tavern.

“We want to believe that the commissioners so enjoyed Hunter’s cherry bounce that they wanted to put the capitol near it so they could enjoy it at any time they pleased,” Dollar says.

There’s little truth to the tale, but some still like to think the bounce is to blame.

“The non-historians would always love to come up with this story, and you know, why let a few facts get in the way of a good story?” Dollar jokes.

But in actuality, the commissioners’ reasons were much more legitimate. They purchased 1,000 acres of land from legislator Joel Lane, given the location’s access to two important thoroughfares in 1792. An east-west road connected New Bern to western settlements, including Salem, and a north-south road served as a link between Petersburg, Virginia, and Charleston, South Carolina.

It should also be noted that three years beforehand, our state’s flagship university, the University of North Carolina at Chapel Hill, was chartered down the road.

“To put the state capital and state university near enough so that it was only a day’s ride between the two made sense to a lot of these state leaders,” Dollar says.

Even with these reasons, some still didn’t believe that Raleigh, of all places, would thrive as a capital.

“The establishment of a seat of government in a place unconnected with commerce and where there is at present no town would be a heavy expense to the people,” read one petition circulating in Cumberland County. “The town, when established, never can rise above the degree of a village.”

Even after Raleigh had been the capital for nearly four decades, some were still against it. “When the capitol burned in 1831, people said, ‘Ah, now’s the chance to move the capital once again,’” Dollar says.

But Raleigh, even in its early days, embodied the very ideals of what a democratic republic should be.

Its central location allowed for more voices of North Carolina residents, even those from far-flung regions of the western part of the state, to be heard.

“Since it was in a new place, it did not have any of the baggage that some of the established cities had,” Dollar says. “It was truly a blank slate.”

Today, the capitol still stands in Raleigh, the thriving, dynamic community that it is. And I have also made amends with my 8-year-old self, who was less appreciative of the embattled vision that created for the city that guides us. May Raleigh do so from now on, forever.