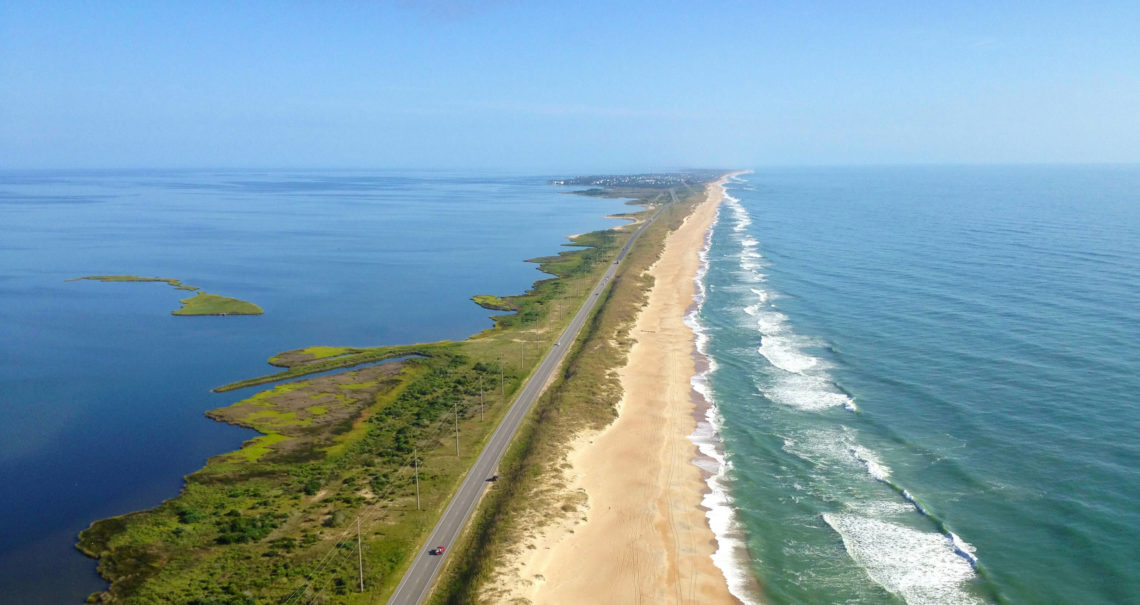 Quickly balancing on one foot and then the next, a handful of visitors at Jockey’s Ridge State Park gleefully ditch their shoes and wiggle their toes in the sand. They pause to survey the half-mile stretch of sand that leads to the largest living sand dune in North America. This dune is theirs for the taking. At the top, vibrant kites whip above park-goers who seem to be facing west, admiring the sunset over the Roanoke Sound. To their east, the green, whitecapped Atlantic rolls in the distance and children race down the dune’s steep side.

“Jockey’s Ridge is one of the most unique places in North Carolina,” says Joy Greenwood, the park’s superintendent. “There’s nothing like the dune fields and the 100-acre maritime forest backing up to the sound. Our rangers can tell you all about the dune system and the park’s ecology.”

Greenwood recommends stopping in at nearby Kitty Hawk Kites to pick up a kite or to learn more about hang gliding lessons. “Nearly 12,000 hang gliders visit the park each year,” Greenwood says. “The dunes are a soft place to take off and land, so it’s great for beginners.” 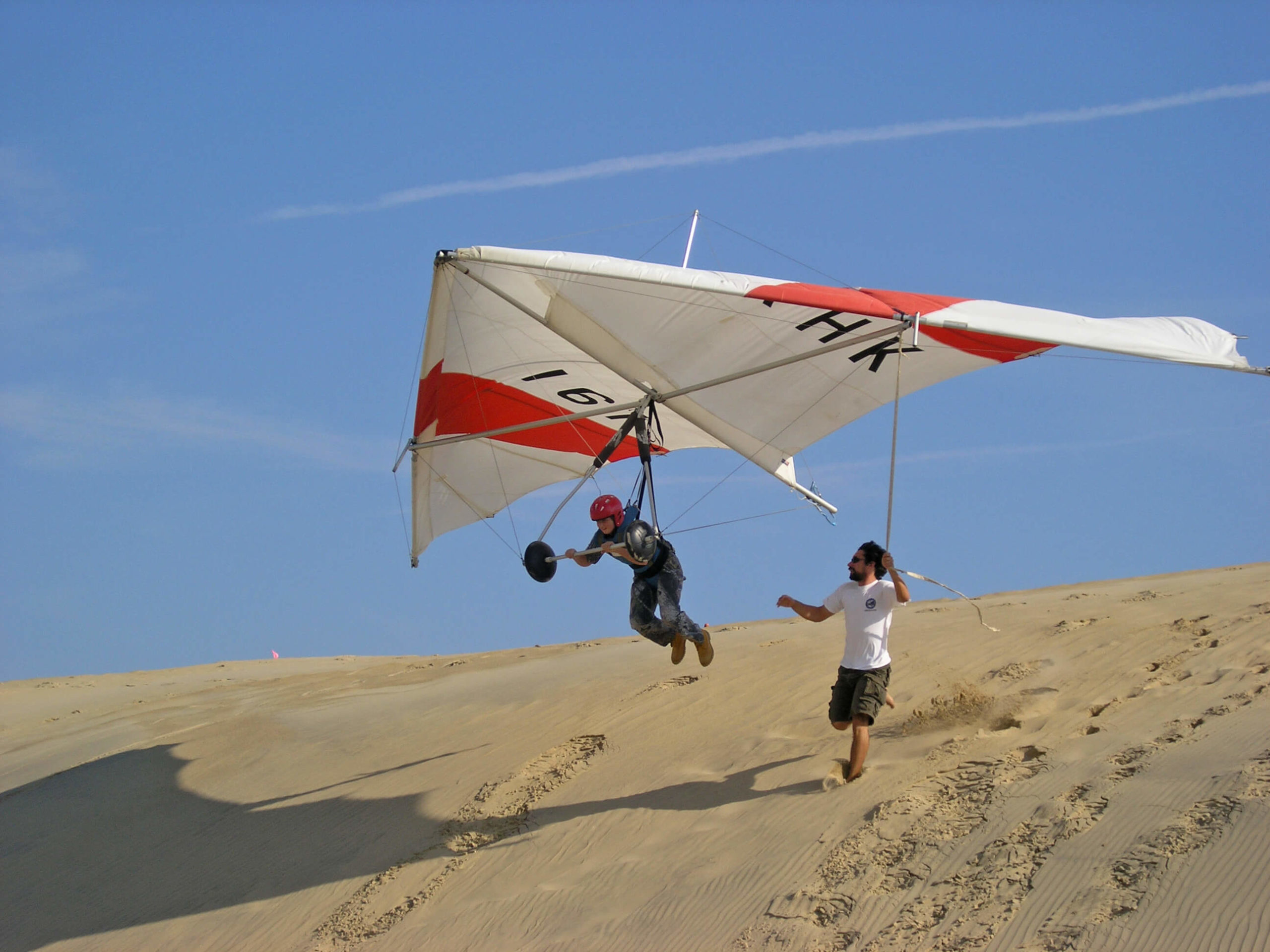 With more than 1.5 million visitors each year, Jockey’s Ridge is one of North Carolina’s most visited parks — but it’s just one of the many destinations that draw vacationers to the Outer Banks. Read on for some of the best ways to explore the 100-plus miles shoreline and seaside villages.

Hop on an open-air safari

The Outer Banks is home to herds of wild horses that were brought to the islands by European explorers in the 1520s. Descended from Spanish colonial mustangs, the feral horses roam freely on remote beaches north of Corolla.

For more than 50 years, Jay Bender’s family has given tourists an up-close look at Corolla’s wild life. “Back in the 60s, we ran fishing, hunting, shelling, and sight-seeing tours, and that really morphed into ATV tours and finally to the Corolla Outback Adventures we host today,” he says.

Settled in on cushioned benches covered by a tent Bender pitched to the back of his white pickup, up to nine guests set forth on a a two-hour, open-air safari up to Carova Beach and False Cape State Park. “I like to tell people all about the history of this area,” Bender says. “It’s the only place like it on the east coast, and the only way to get up to see about 1,000 houses is through four-wheel drive.”

And when they spot the horses, Bender is often just as surprised as his guests. “You never know where they’ll be—sometimes on the beach, sometimes in the back area. There are 105 now, and they have an entire habitat set aside for them.” 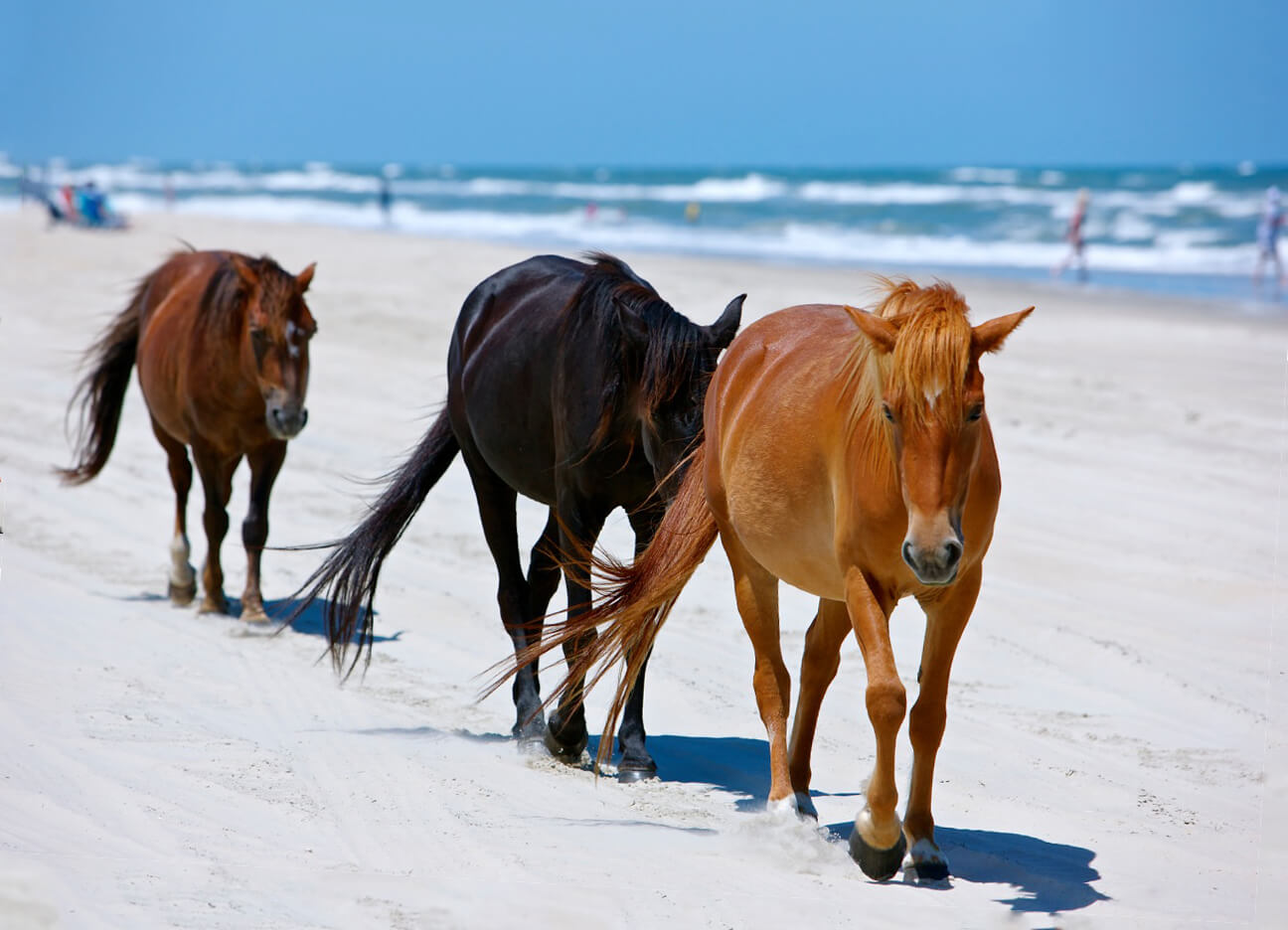 The site where North Carolina became “first in flight” thanks to Orville and Wilbur Wright, the Wright Brothers National Memorial gives you a chance to learn about how these famous brothers honed and mastered their aircraft over three years.

“A lot of the park is outdoors — the reproduction of the camp where they worked, the flight line, the monument, and a life-size sculpture of the first flight moment on the backside of Big Kill Devil Hill,” says Beth Hudick, a supervisory park ranger. “The visitor’s center takes everyone through the story of the Wright brothers, and there’s a reproduction of the 1903 flyer, which is well-worth checking out.”

Though visitors can explore the park unguided, 30-minute ranger programs are held several times each day and tell the story of how the brothers experimented with their flyer system and control system, giving a special insight into the story and the park. 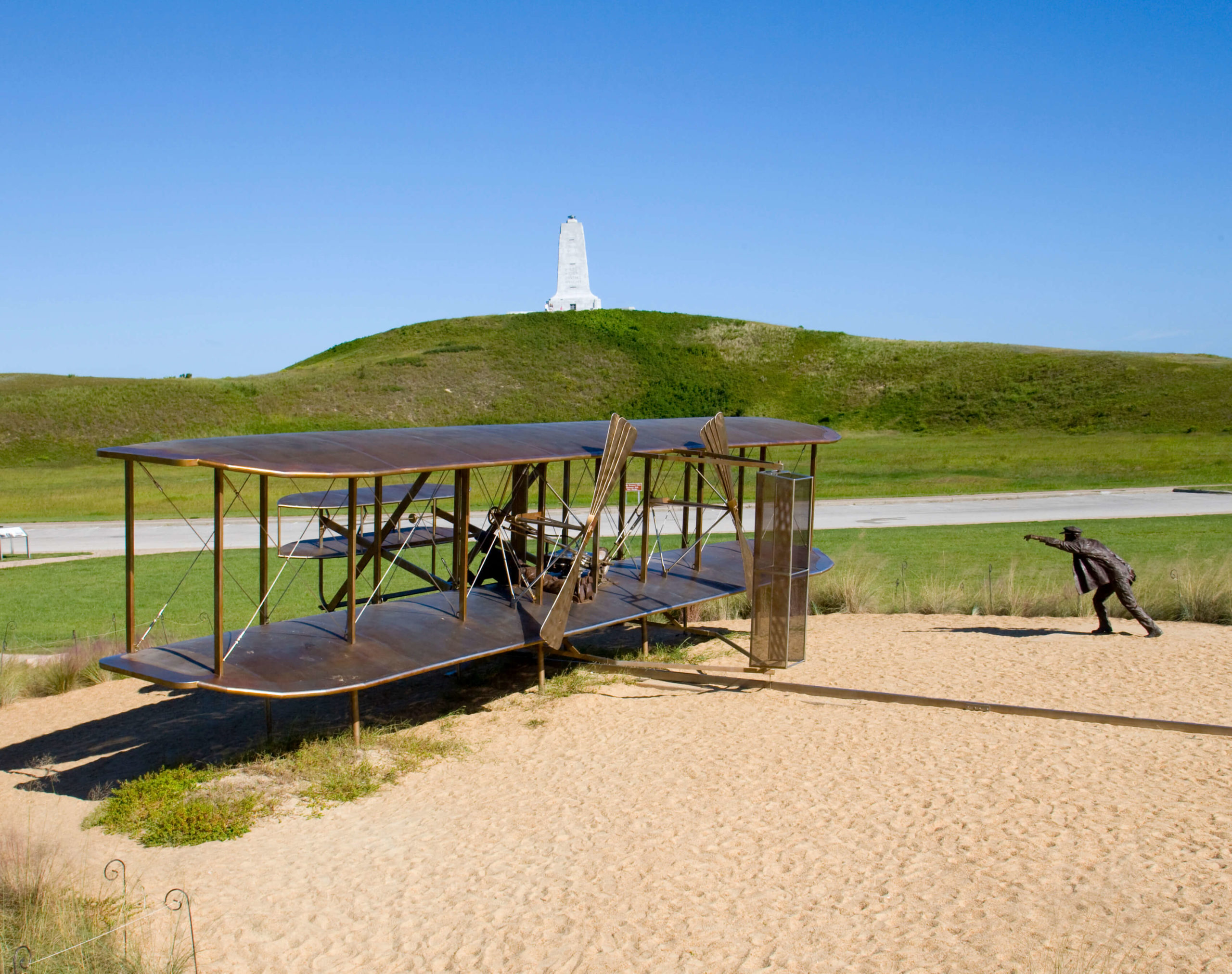 Cape Hatteras National Seashore preserves 70 miles of the North Carolina coast from Bodie Island to Ocracoke. Here, you can do it all, from hiking, fishing, and camping to taking off-road vehicles on to designated parts of the beach. Be sure to keep an eye out for sea turtles!

“There is so much to explore at the seashore, but I personally love the lighthouses: Bodie Island Lighthouse, Cape Hatteras Island, and Ocracoke Lighthouse,” Hudick says.

The lighthouse grounds are open year-round, and the Bodie and Cape Hatteras Lighthouses are open for climbing late April through mid-October. Check the website for updated information on guidelines and safety concerns. 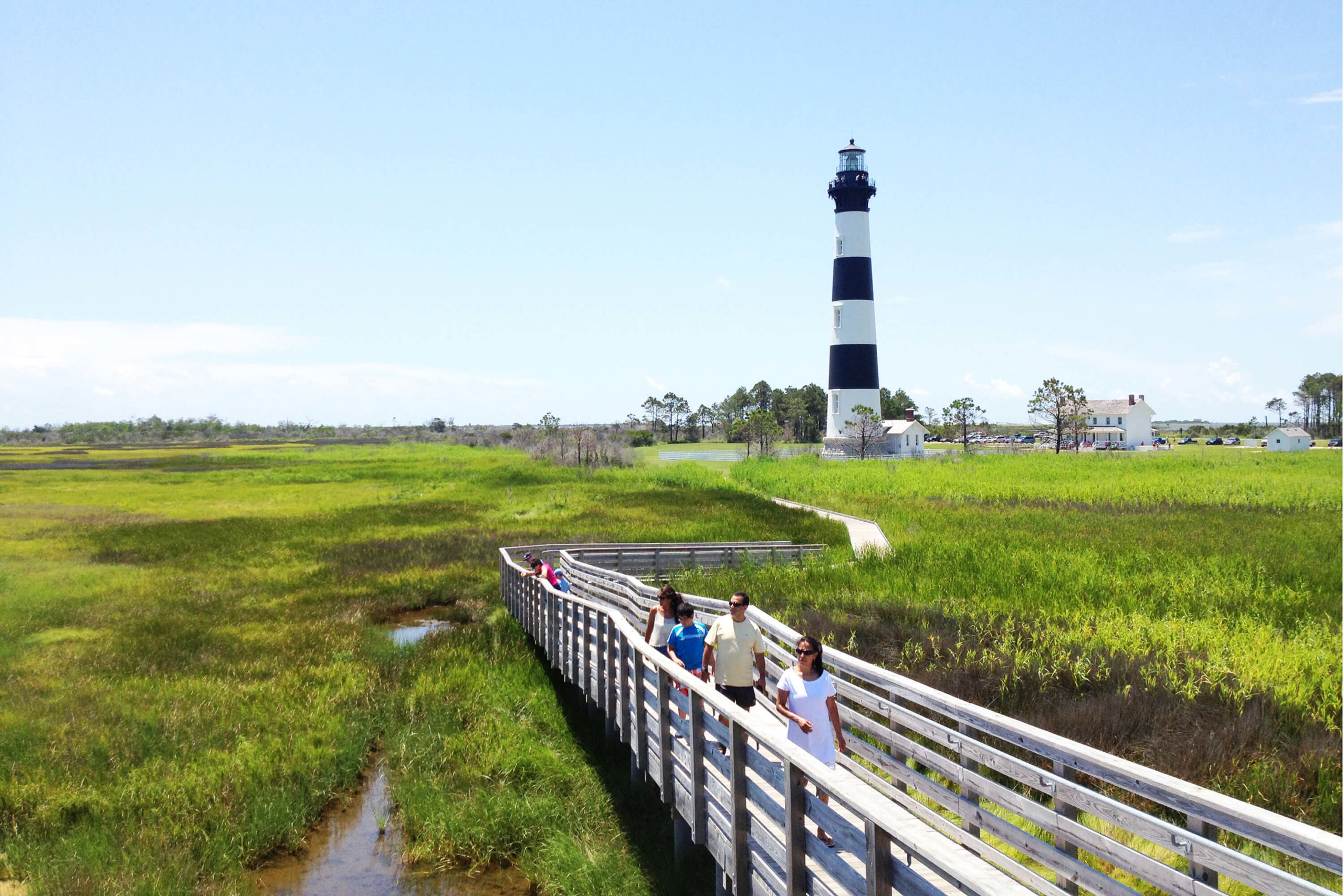 Find your zen at the Elizabethan Gardens in Manteo

For a peaceful respite and a step back into history, venture to the Elizabethan Gardens in Manteo. Located on Roanoke Island adjacent to Fort Raleigh National Historic Site, it features a diverse horticultural collection in its sunken gardens.

“You can’t have a bad day in the gardens,” says Executive Director Carl Curnutte III. “We have a mutual heritage with the Lost Colony — the first English settlers in America — and we are a 16th-century formal garden blended in a native garden. It’s a mix of the old world and the new world that we love to celebrate.” 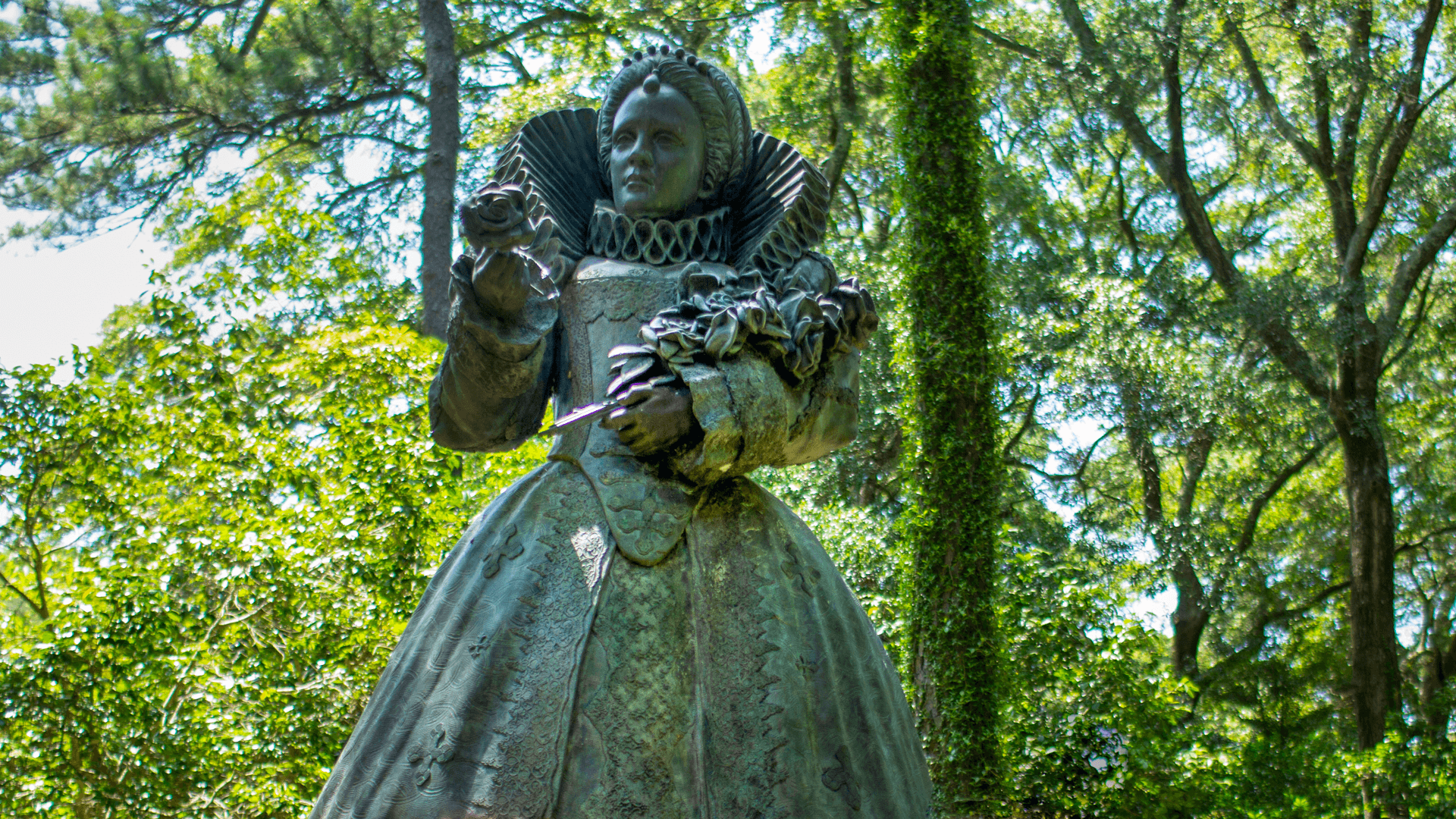 A statue at the Elizabethan Gardens photograph by James Mieczkowski

Raise a glass at the Vineyards on the Scuppernong

While in Manteo, stop into Vineyards on the Scuppernong and taste their six fruit wines with flavors of strawberry, peach, apple, raspberry, blackberry, sangria, and muscadine.

“Our signature wine is Jackass Red, a muscadine wine made from the same breed as the Mother Vine, which is estimated to be over 400 years old and is the oldest cultivated grapevine in North Carolina,” says Charley Bishop, business manager at Vineyards on the Scuppernong.

The vineyards also sell consignment from artists local to the Outer Banks, as well as specialty foods like jams and honey. “Walking from our shop, you can easily get to great shopping in Manteo,” Bishop says. “The Kill Devil Rum tasting at Outer Bank Distillery is popular, and the Lost Colony Brewery and Café has great beer and food pairings.”

Relax at the Sanderling

From its enviable waterfront perch in Duck on the northernmost strip of the Outer Banks with views of Currituck Sound and the Atlantic Ocean, Sanderling Resort has served as a peaceful respite for Outer Banks travelers since it opened in 1985. Named for the dainty, quick-footed birds that dance along the sand, the Sanderling is known for its luxurious guest rooms, two restaurants, and a full-service spa.

After a day on the beach, make your dinner reservation at the Sanderling’s Lifesaving Station, housed in the historic Caffey’s Inlet Life Saving Station No. 5. Prepare for dishes like the seared tuna with white truffle and shoepeg corn risotto; or pan-seared scallops with charred broccolini, blood orange, and rosemary butter. Still hoping for dessert? Guests receive all the fixin’s for s’mores. Roast ’em over the firepit and then head inside to play board games. 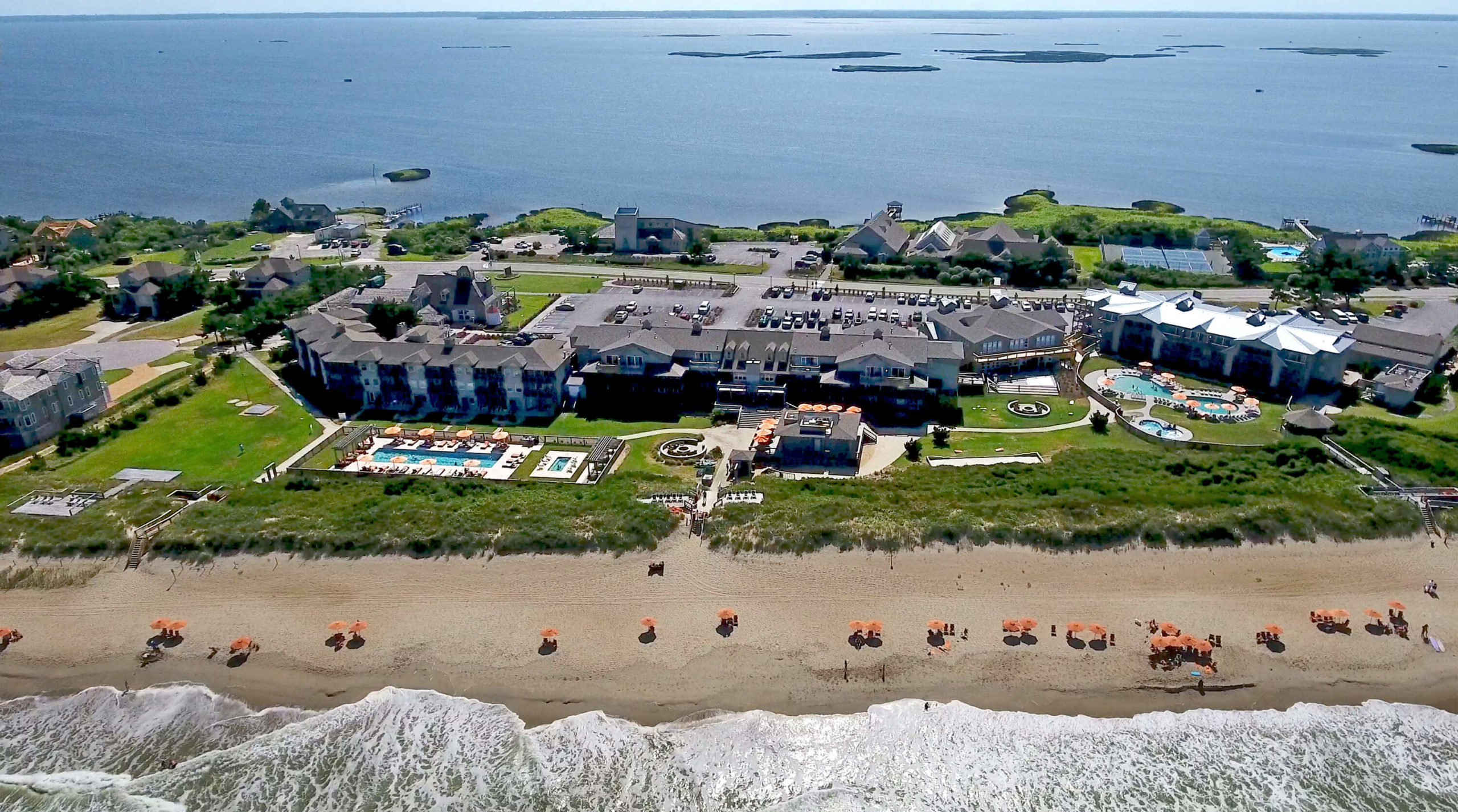