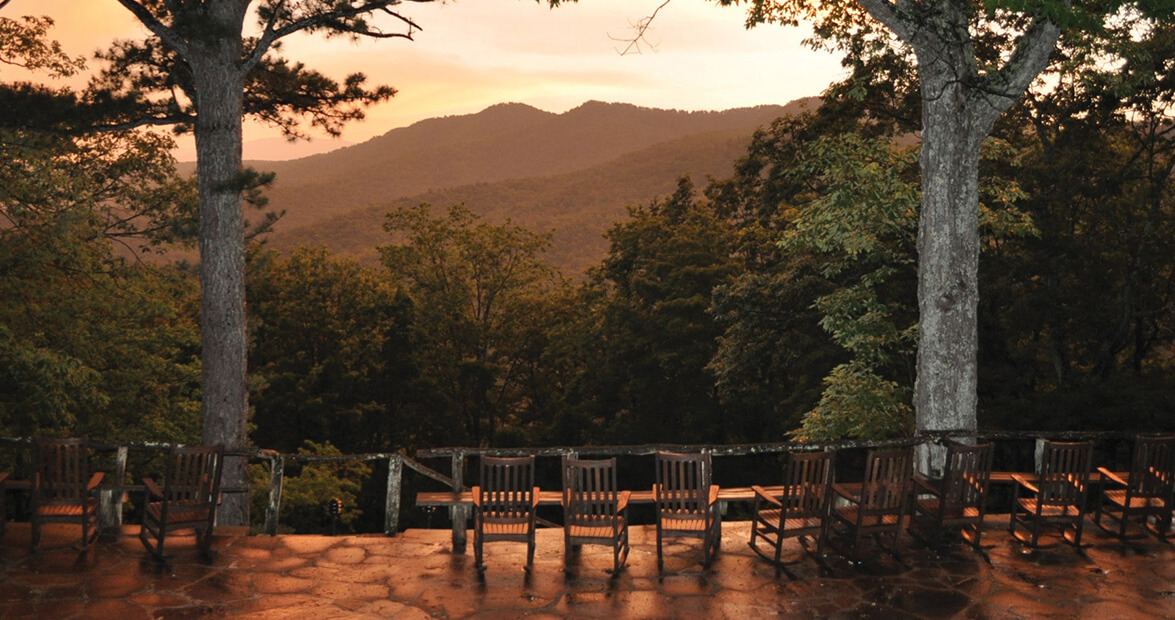 Some places on earth seem to hold the spirits of those who came before us. In North Carolina, I’ve felt their vivid presence at the Civil War battlefield of Averasboro, in the oldest Episcopal sanctuary at Bath, and at Somerset Place in Creswell, where enslaved people gave their lives digging massive canals to ferry crops to the Albemarle Sound.

And then there’s Wildacres on Pompey’s Knob near Little Switzerland. It’s a nonprofit retreat where creativity has blossomed on the lips of musicians and poets for generations.

I first set foot on the grounds of Wildacres in the 1980s and found myself awash in a swirl of arpeggios emanating from the handsome stone buildings. Here, depending on the week, groups of flutists, oboists, bassoonists, saxophonists, cellists, and drummers gather to practice their craft in a mash-up dedicated solely to a particular instrument. Evening concerts, given in the Wildacres auditorium by these musical masters, are free and open to the local community.

Other weeks in the season, which runs from April to October, are given to writing, storytelling, shape note singing, the exploration of various faith traditions, painting, wood carving, and pottery. Three private cabins down the mountainside are reserved through a competitive selection process for individual artists with a project they propose to push forward while in residence.

Of course, the overwhelming presence of creation here also dictates, on occasion, an environmental focus. For the past 16 years, the North American Mycological Association has put the wild in Wildacres by organizing an expedition of dedicated mushroomers who comb the woods and, if rain has been plentiful, find and identify some 400 species of native mushrooms.

No other educational institution in our state is quite like Wildacres, and perhaps the secret ingredient came with the retreat’s salvation from ruin by the Blumenthal family of Charlotte. These 1,400 acres were originally developed as a summer resort for artists and writers by Thomas Dixon of Shelby, whose early 20th-century novel, The Clansman, formed the basis of the controversial film The Birth of a Nation. Dixon lost his Hollywood-made fortune during the Depression, and the retreat went into receivership. By a fluke, I.D. Blumenthal learned of the property from his rabbi and bought it in 1936 for a song — an auction bid of $6,500. I.D. and his brother Herman gradually renovated the run-down facilities and began inviting groups to come for religious and, later, arts-related programs.

Wildacres is now a public charity dedicated to the betterment of all human relations, and it carries the breath of all those talented humans who have made music and poetry here over the years.  Though some of the notes may have diminished beyond our hearing, they still rustle the leaves of the oaks and maples and rattle the limbs of mountain ash and cherry, carrying the tune until the next group arrives to make more magic.