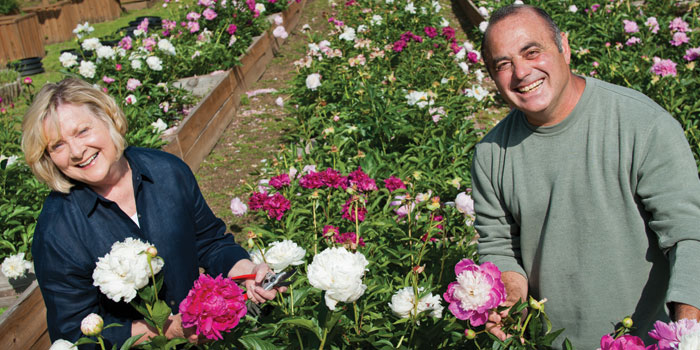 You have three weeks. If you want to walk through rows and rows of blooms the size of dinner plates — through a thousand bursts of pink and fuchsia and buttermilk and tissue-paper white nodding agreeably in the mountain breeze and calling you sweetly with scents that make you swoon — if you want to take all of that in and maybe take some of it home with you, you have three weeks, and only three weeks. Go and find your calendar and write it down: the last week of April, give or take, and the first few weeks of May.

That’s when the peonies bloom at Wildcat Ridge Farm in Clyde. And that’s when you can make an appointment to walk the rows with Ricardo and Suzanne Fernandez, who own the place. Up here, peony season is short and sweet. You choose the blooms you want; Ricardo and Suzanne will cut. You can buy potted peonies, too. People come from as far away as Raleigh and Atlanta, Georgia.

If Ricardo hadn’t fallen off Suzanne’s roof, he might still be a springboard diving coach. The two had just met, and Ricardo was helping Suzanne take down some Christmas lights. He broke his arm so badly that he couldn’t go back to coaching and diving. Suzanne eventually fell for Ricardo, too, and they married in 1978. “She’s a lucky girl,” Ricardo says. “I keep saying it over and over.”

Ricardo was born in Argentina; Suzanne is from New England. Their house, which perches on the edge of the Pigeon River, used to be a barn. Inside, you can still see some of the barn’s original supports running through the walls. Outside, along with the peonies, you can see fig trees and blueberries and raspberries and blackberries and asparagus. Lettuce. Basil. Arugula. Ricardo is a master gardener, and what he puts in the ground blossoms and bears fruit and thrives.

The ancient Greeks believed that Paean was a kind of doctor to the gods and that he discovered many of the medicinal uses of herbs. He was so successful that his former teacher Asclepius became jealous and plotted to kill him. But Zeus saved Paean by turning him into a plant, so Asclepius couldn’t find him. (You can still find him, though, growing wild all over Europe as Paeonia officinalis, the common or European peony.)

The Chinese provided the first written description of the plant. The exact time line is a little unclear, but they wrote about the peony as a medicine in 200 B.C. and possibly earlier. The Roman naturalist Pliny the Elder wrote that you should dig up a peony root only at night: Digging one in the day meant you might be caught in the act by a woodpecker, which would then try to peck your eyes out.

The Greeks said it was the queen of herbs; the Chinese called it hua wang, the king of flowers. It has been recommended at one time or another in one culture or another as a treatment for jaundice, stomach and chest pains, epilepsy, blood and liver disorders, and cleansing the womb after childbirth. It figures into ancient Chinese herbal remedies with names that roughly translate to “clear-the-stomach powder” and “clear-the-liver decoction.” When cut, the root is pungent and bitter, and it can take months or years to rot. We now know that it contains phenols, tannins, and other substances that do harm to bacteria, viruses, toxins, and tumors.

In the Middle Ages, peasants crushed the seeds and used them to flavor stews. Wealthier people baked the whole root and served it with roasted pork.

There are three basic peony types: herbaceous, tree, and intersectional. Herbaceous peonies die back to the root every fall and grow back in spring; tree peonies leave a woody structure in place each year; and intersectional peonies are a cross between tree and herbaceous. Peony flower types include single, anemone, semi-double, double, and bomb-double. (A description of these blooms and the biology behind them could fill a textbook, but suffice it to say that the bloom types can be as different from each other as an aster is to a rose.)

Peonies don’t mind cold or drought. Deer leave them alone. The plants can live for decades; a couple of hundred years is not unheard of. Settlers heading west in covered wagons brought with them “piney toes,” which were dormant peony eyes with the roots still attached. One such plant went west to Oregon with a pioneer from Bethel, Missouri, in 1860. That pioneer’s plant is still alive in Monmouth, Oregon, and his descendants care for it. Some species of peony can strike adventitious buds: They don’t necessarily have to bud at the tip of a stem but may bud from the root, for example. That means that if the peony suffers a dreadful disaster one year, the next year it can recover and even thrive.

In 2004, Ricardo and Suzanne weren’t growing peonies. They ran their own restaurant (Ricardo is an accomplished chef), planning for outdoor cooking classes at a giant, brick grill and 40-foot farm table Ricardo built on the bank of the Pigeon River beside their house. They tended to a 30-by-100-foot greenhouse full of prize-winning orchids. One of Ricardo’s orchids had just won the double-trophy award — the best of the best — at a regional orchid convention in Asheville.

“We were going to open the farm as an orchid farm,” Ricardo says. “I was going to start giving classes in cooking farm-to-table cuisine.” A hundred or so people came to the grand opening, he says. “And we did a great grill. We had umbrellas and tables; it was beautiful.”

Then, Hurricane Frances hit. Not with wind, but rain. “We had what they called a 100-year flood on this property,” Suzanne says. It rained all day and night, and the Pigeon River brushed the couple’s doorstep.

“Everything just left,” Suzanne says. “The greenhouse washed into Tennessee,” Ricardo says. All of the brick and mortar for the grill washed away, and buried propane tanks came up out of the ground. “It was the most horrific sight,” Ricardo says. “Fourteen to 16 feet of debris. We did the cleanup.”

“A few days later,” Suzanne says, “Hurricane Ivan came, and it was worse. Everything was knocked down, sent down the river, or washed onto our property from upstream. All our raised garden beds for the restaurant — gone. There was nothing left.”

“Not one orchid,” Ricardo says. “So we needed to start again.”

Then, together, both of them say, “And here we are.”

They couldn’t do orchids again. “It was just too painful,” Suzanne says. They hit upon peonies, and Ricardo started experimenting with fig trees to figure out which would grow best in the mountains. Now, he has several fig varieties growing on more than 200 trees.

The couple sold their restaurant a few years ago, but when Ricardo was cooking for it, he went to a gourmet market in Asheville to plan his menu every week. While there one day, he saw a flat of figs. “The perfect, perfect figs — they all looked the same,” he says. “But they are tasteless. No taste. They were cut too green; they cannot be ripe. It looks like a fig, but it’s not figs.” So he told the market’s staff he’d be back next weekend, told them to get ready. “I came home to all my different fig trees,” he says. “The little ones black, the green ones, the large ones, the strawberry flesh, yellow flesh, sweeter, drier.” He picked them and put them into baskets, mixed. He brought them back to the market the next weekend. He left the basket on the counter, then went into the nearby walk-in cooler for a minute. “And I hear this screaming, ‘Oh, my God. Oh, my God. Oh, my God!’” he says. “They were like bears with honey. They say to me then, ‘We’re gonna buy everything you have.’”

Suzanne sighs, thinking back on all the things she and Ricardo have done together — the wine import business they started after they first met; the restaurant they ran for 16 years; the orchids, the peonies, and the figs; the pasta-sauce business that now keeps them hopping around the South doing in-store demos. “In the beginning, it was difficult,” she says. “My approach to life comes from a different book than his.”

“She is in the clouds,” Ricardo says, “and I bring it down to reality.”

“Yes,” Suzanne says. “But the truth is that we quickly figured out that each of us had different abilities. I’m good at this part, and he’s good at that part. We don’t compete in any way; we just allow each other to perform our best.”

In Ricardo’s mind, the connection between everything he and Suzanne have done together is the couple’s passion for beauty. “I look at an Itoh hybrid peony,” he says, “and it’s like headlights shooting at me. And you’re having in that bush 20 of them looking at you. I just get the goose bumps. It’s the appreciation of what God did to a flower. And I keep taking pictures, and I’d love to be able to get inside that flower. I will go out at 7 in the morning with my coffee, walking around, looking at them. Then I go at noon, and it’s a different form. I go at 2 o’clock, and it’s opened up all the way. And then at 4, it’s started closing down. It’s gorgeous. And to us, it’s priceless. We suffered when we lost the orchids. But what we do is part of life.”

“The thing that I love about the peonies,” Suzanne says, “is that … well, I believe you should eat according to the seasons. And I believe that you should enjoy things according to their season. So if a peony just blooms for three weeks once a year, I think that’s great. That’s OK. You know? That’s life.”

To make an appointment to tour Wildcat Ridge Farm and buy potted peonies, cut flowers, or fig trees, contact Ricardo and Suzanne through their website or by calling (828) 627-6751.

Jason Smith lives in Carrboro and is the editor of Endeavors, a research magazine published by the University of North Carolina at Chapel Hill.