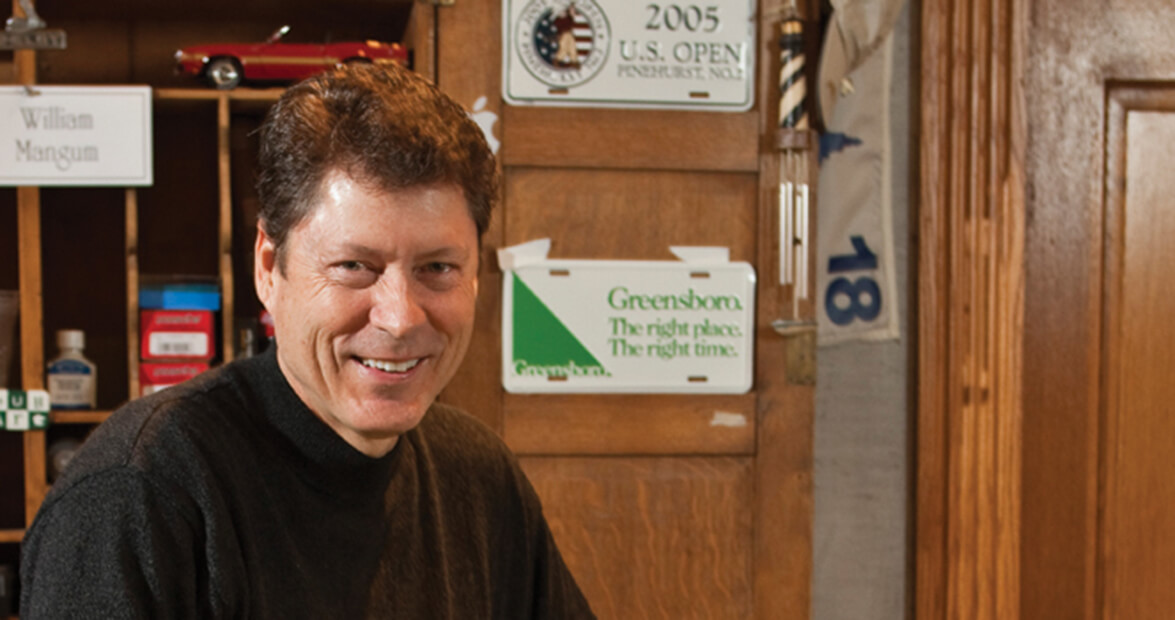 EDITOR’S NOTE: This story originally appeared in the February 2010 issue.

William “Bill” Mangum’s career as a watercolor artist began because of a girl. Not just any girl, but his mom.

Affable and enthusiastic, Mangum describes his start as we talk in the cozy Greensboro office that houses dozens of his original works. He was a senior at the University of North Carolina at Greensboro and needed a present to give his mother for Christmas. He bought a 59-cent tray of watercolors and painted her a picture. Her reaction launched his career.

“Like any mom, she just doted over it,” Mangum says, beaming as if the moment had happened only yesterday. “She said, ‘Billy, this is great.’ And I said, ‘Mom, I really think I’ve found something.’”

Mangum went on to earn his bachelor’s and master’s of fine art from UNCG. In the past 32 years, he’s built a successful career as an artist that has carried him from North Carolina to Italy and back again. He’s well known in the United States and has created custom works for some of Europe’s most prominent art collectors.

Mangum’s artistic gift has enabled him to give back to the community. A passionate advocate for the homeless and needy, Mangum’s holiday “Honor Card” program has helped raise more than $2.65 million for homeless agencies throughout the state in the past 21 years.

One of the latest creations to come out of Mangum’s expansive gallery on Lawndale Avenue in northwest Greensboro is his sixth book, Classic North Carolina Golf Courses. Mangum was born in Pinehurst and attended Sandhills Community College before going to UNCG; the game of golf has always been a part of his life.

“Prior to doing this book, I had the pleasure of painting for Augusta National, Pebble Beach, Pinehurst, and Congressional,” says Magnum, a 25-year member at Greensboro Country Club. “Then I got invited to be a member of the North Carolina golf panel.”

The panel is made up of about 125 individuals who travel around the state and rank 30 to 40 golf courses a year to create and tweak their list of top 100 courses. Being a part of the panel is pure nirvana for an 8-handicapper like Mangum, but it’s also a big time drain for a man running his own business.

“After the second round I played for the panel, I said to myself, ‘This is really great, but with all the time I’m spending on this I’ve got to leverage this to my livelihood,’” he says, smiling. “So, I started thinking about the idea of doing a book on North Carolina’s greatest courses.”

Coming up with the idea for the book was one thing; finding the time to tour, play, and photograph the courses was another issue. In September 2008, Mangum started visiting the courses and, in less than nine months, had created a mind-boggling 78 new paintings.

“Let’s just say my wife was not a happy camper with me,” he says. “For about three months, I worked seven days a week. But I was on such a roll and had put the stake in the ground for timelines and commitments and appearances, so it had to go to publication.”

Lovers of both art and golf will be pleased with the fruits of his labor. The book features many of the state’s most famous tracks, such as Pinehurst No. 2 and Pine Needles, along with many private country clubs, including Greensboro’s Sedgefield and Charlotte’s Quail Hollow. Classic North Carolina Golf Courses is the first of two golf books for Mangum. His next one will feature courses built in the state in the past 25 years, including Bryan Park in Greensboro, site of the 2010 U.S. Public Links Championship.

Long after the next book is published, the courses in these books and the history they share will stay near and dear to Mangum.

“When you realize the Village of Pinehurst is literally on the same footprint that it was designed on, it’s just unbelievable,” says its proud native son. “And then to think of the history of these great clubs (around the state) and all the iconic players, like Byron Nelson and Sam Snead, who used these courses as their stomping grounds, it’s really just amazing.”