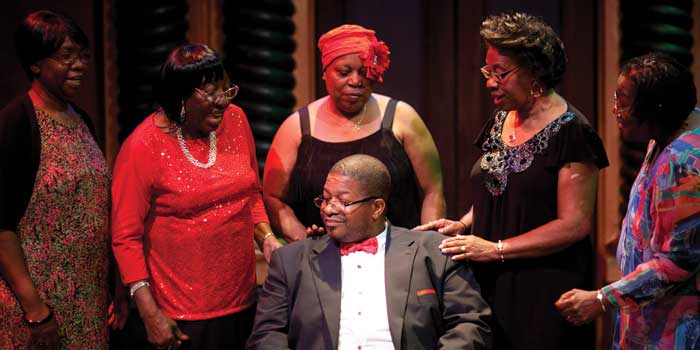 The actors snap their fingers in time to the music, nodding their heads in unison. But this rendition of Ain’t Misbehavin’ is decidedly off-key.

Evelyn Noble Nixon, still dressed for her day job as a licensed practical nurse in a colorful smock and blue pants, walks toward the stage frantically waving her right hand.

That’s all it takes, a few words from the director to help them focus, and in a few minutes, Wilmington’s Willis Richardson Players find their groove and move on to pound out a lively version of “This Joint is Jumpin’.”

Anything less than their best is not enough for Nixon.

“I’ve been called hard when it comes to being a director,” she says, “but that’s only because I want the best of them to show.”

Born in Wilmington in 1889, Richardson was a pioneer in the black theater movement and a leading figure in the Harlem Renaissance in the 1920s. The first black playwright to have a nonmusical production — The Chip Woman’s Fortune — on Broadway, Richardson wrote and directed plays authentically depicting black life in America. Throughout the 1920s and ’30s, he wrote more than 30 plays, compiled anthologies of significant works by black playwrights, and accumulated accolades for his work. In 1928, he won the Edith Schwab Cup at Yale University for The Broken Banjo, A Folk Tragedy.

Despite his early success, Richardson never earned his living in the theater. His family left Wilmington following the city’s race riots of 1898 and settled in Washington, D.C. At age 23, he went to work at the Bureau of Engraving and Printing, where he retired 43 years later. By the time he died in 1977, he was little more than a footnote in the nation’s theatrical history — except in Wilmington, where a handful of black actors formed the Willis Richardson Players in 1974 to pay homage to the playwright.

“I don’t think he’s as well known as he should be,” says Lela Thompson, a founding member of the troupe. “As long as we’ve been here, you’d think he’d be better known.”

Twice a year, the Willis Richardson Players remind the community of Richardson’s local roots when they take the Thalian Hall stage. In the spring, they produce a play. This month, they’ll put on their fall production, an annual show that draws performers and patrons from as far away as Shallotte and Burgaw.

Richardson shared the vision of some of his contemporaries, such as W.E.B. DuBois and Langston Hughes, of using the theater as a way to encourage blacks to develop their talents and sense of integrity. His plays often center on manhood, family, and the importance of support within the black community. Today’s audiences still flock to such Willis Richardson Players productions as Raisin and Don’t Bother Me, I Can’t Cope, which fill the stage with predominantly black casts.

A sense of community

Nearly everyone in Wilmington knows of someone who’s been in the Willis Richardson Players, especially alumni of the formerly all-black Williston High School. Before the school was converted to a middle school in the 1970s, Williston’s theater program was the crown jewel of extracurricular activities, drawing packed houses to the school auditorium every year. The plays were a big deal for Wilmington’s black community, which dressed in its finest to come out and support the students.

The Willis Richardson Players, many of whom are Williston alumni, attract the same kind of support. When Thalian Hall was renovated in 2009, Bubbling Brown Sugar drew a standing-room-only crowd at the facility’s second-floor Studio Theatre, patrons squeezing along the wall for a pair of weekend shows.

“I think it does a lot for the community and the younger people today, seeing these performances,” says Benjamin Foreman, a 1965 Williston graduate who, as a third grader in the 1950s, was relegated to Thalian Hall’s blacks-only balcony.

“I always wondered if one day I’d be on that stage,” he says. “I thought it was an honor and a privilege to be with the Willis Richardson Players.”

Young members of the community find a place in the troupe as well. Zale Cannady, a seventh grader at Leland Middle School with professional acting and writing aspirations, gained his first community theater casting in the spring production of Ain’t Misbehavin’. His mom, big sister, and aunt also won roles in the show.

“I was pretty nervous because I’d never been in a play with anyone other than my schoolmates,” Cannady says. He and his sister felt at home soon after rehearsals started. They challenged each other to get their parts right and giggled together with other cast members during breaks.

Replenishing the talent pool with youngsters keeps the Players going strong, Nixon says. “We welcome new people to come in,” she says. “Once a person has been in one of our performances, if their time allows, they want to be in another one.”

No shortage of enthusiasm

As a community theater group, the Willis Richardson Players make do with a shoestring budget and an all-volunteer cast and crew. No one gets paid, yet there’s no shortage of enthusiasm for the troupe and the opportunity for fun and community it provides. Shows usually sell out, primarily through word-of-mouth advertising.

“I think we have really encouraged many in our community, especially minorities, to go down to Thalian Hall,” says Thompson, who recently stepped down as president after serving for 19 years. “We have pretty good audiences, and some of the people, maybe they wouldn’t come unless they had someone they knew in a production. Over the years, they’ve stuck with us, whether they had relatives or friends in there or not. If it’s one thing we’ve done, we’ve introduced people to the theater.”

Audiences show up early for Willis Richardson Players productions, and after the curtain falls at the end of a performance, they linger, sharing hugs, handshakes, and impromptu reviews.

To Nixon, who has directed 12 productions, this support is the best part of the show. “I love it,” she says. But she also relishes the rehearsals and the process of getting a cast ready for opening night, regardless of the amount of work it takes.

“It’s very relaxing, even though it doesn’t seem like it,” she says. “When I deal with the public on a daily basis and everybody is so serious, this is an outlet for me to relax and have fun and enjoy myself.”

And, as a member of the players since 1996, she knows firsthand what the actors experience as they try to shape words on a page into a living work of art on the stage. She recalls the anticipation she felt on opening night 15 years ago when she played Sister Moore in Amen Corner. She channels that energy to the cast as she directs.

“I know what it takes to give a good performance,” she says. “I understand the nervousness people feel and how sometimes they become overwhelmed with their parts. I try to keep all that in perspective as I coach them into the way they’re supposed to perform.”

That is, in a way that honors Willis Richardson.

Herb White is the editor of The Charlotte Post.