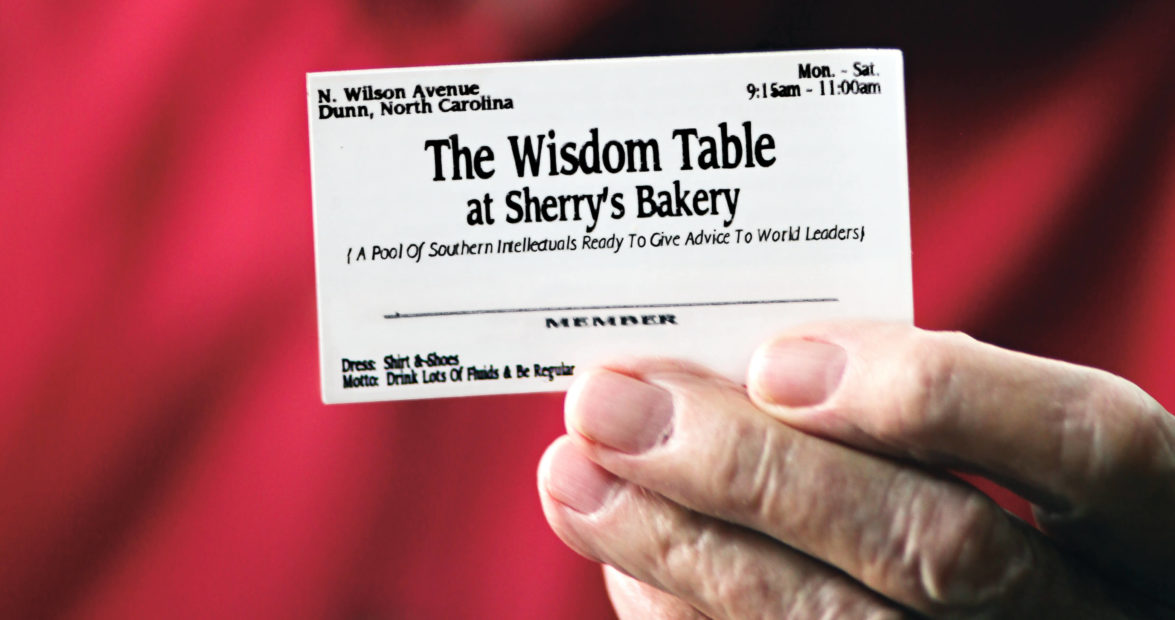 EDITOR’S NOTE: This story originally appeared in the February 2010 issue of Our State.

Keith Finch lifts his tall, lean frame from a chair at the far end of three tables that have been pushed together to form one long, narrow one. He ambles toward me, bends, and whispers into my ear.

“Billings said it ain’t the truth that’s so bad — it’s the truth that ain’t so that hurts,” he says, paraphrasing. “So, that statement is prevalent around this table.”

He returns to his seat while the rest of his mates — there are 17 on this day — chatter on, picking and poking and joking their way through another morning. One pulls away from his conversation and asks Finch what he’s whispered.

“I told him you were a great American, even though you were a left-winger,” a poker-faced Finch replies.
Welcome to The Wisdom Table, a popular gathering spot at Sherry’s Bakery in the Harnett County town of Dunn.
Don’t be deceived by the name.

Six days a week, you can count on ample servings of foolishness — sprinkled with the odd garnish of wisdom — being dished up by a crowd of mostly retired men who have gathered for years to shoot the breeze at what Freddie Williford calls “The Sweetest-Smelling Corner in Town.”

Donuts by the dozen

Williford was driving a bread truck in 1967 when someone talked him into buying a little bakery called Dunn Rite. He and his wife, Mary, a partner in the enterprise from the beginning, renamed the sweet shop after their daughter, who was about 6 at the time.

Freddie and Mary wed 57 years ago, on July 4, 1953. He was in the service, preparing to ship out for overseas duty and watching as fellow servicemen all around received “Dear John” letters from girlfriends who were “quitting ’em.”

He’d been in love with Mary since they were in the seventh or eighth grade and wasn’t about to let her slip away. So Freddie went AWOL, made a quick trip home, married Mary, then headed back to his military base in New Jersey. A military policeman collared him in Richmond. Freddie poured out the story of his hurried trip and recent marriage, and the sympathetic MP sent him on his way: “You’re in enough trouble. Go on.”

Today, Sherry’s Bakery sells about 75 dozen, sometimes 100 dozen, freshly made doughnuts every day and 50 to 75 pounds of chicken salad every week. Mary makes the chicken salad. “Nobody can touch her making chicken salad,” Freddie says. “I can’t tell you her secret, but she’s got one.”

Cakes are another hot item. Five days a week, workers whip up enough batter to bake 170 pounds of cake a day. The 10-layer chocolate cakes are by far the most popular, although red velvet cakes fly out the door at Christmastime.

Williford’s staff is a mix of family and employees who have been at Sherry’s for so long they’re just like family. Sort of like the fellows at The Wisdom Table.

“It kind of happened,” Williford says. “More came in, and more came in. In fact, they didn’t have a name for a long time.”

In dubbing the daily gathering The Wisdom Table, Williford set aside such suggestions as The Breakfast Club, The Therapy Table, and The ROMEO Club (Retired Old Men Eating Out).

“They pretend to know it all, you know,” he says, smiling, “and if you do, you’re ‘wisdom,’ you know. And they’re near and dear to us. They have a good time.”

Pulling up a chair at The Wisdom Table is akin to joining a coffee klatch for retired stand-up comics attempting to out-zing one another.

There is disagreement about when The Wisdom Table got started — 12 years ago, 15 years ago, 20 years ago, a long time ago. Finally, the general consensus: “It’s old as dirt.”

At 89, Finch, a retired general contractor who was an aviator during World War II, is the oldest member of the group, which boasts a “mascot.” That would be retired barber and magistrate Arvle Tart’s grandson, Parker Tart, who is 16. The younger Tart has been coming to The Wisdom Table with his grandfather since he was three.

“He said he was going to write a book on it,” Arvle Tart says.

This is no fly-by-night assemblage. They’re bona fide. It’s right there in black and white, italicized, on the front of their membership card: A Pool Of Southern Intellectuals Ready To Give Advice To World Leaders.

The membership card notes that there are no dues and no officers, but shirt and shoes are required. The motto: “Drink Lots Of Fluids & Be Regular.”

“It’s probably the most active group in town,” says Ray Brewer, a retired banker. “How many (groups) meet every day?”

Not just anyone can join The Wisdom Table: One must be voted into the fold. Rule 1 on the back of the membership card says so. But the requirement is as relaxed as the gathering. It takes a single vote to be admitted — and a prospective member may vote for himself.

Women are not excluded; they simply choose to steer clear. “They send us here to get rid of us,” says Robert Hamilton, a retired field engineer, whose buddies quickly identify him as a newlywed.

The men spend a fair amount of time talking about operations, doctors, and medications, or, as Robert Wells, retired teacher and school administrator, puts it, “what’s been wrong with them, what they’ve had done. … You’ve heard about people who have support groups. For some of us, this is our support group.”

The discussion menu typically features a political disagreement (or two or three) du jour. “We argue about it or make fun of some of the things other people think — like our liberal friends down at the end,” says one.

Candidates sometimes stop by when politicking. Gov. Beverly Perdue visited Sherry’s Bakery when she was running for the state’s highest elected post in 2008.

“What did we tell her?” asks one wag, among the mostly GOP-leaning crowd, before answering his own question. “Do right.”

Perdue has not followed the advice, according to another Wisdom Tabler. A third steps in to defend Perdue, noting that after her election as governor she had to scramble to fill big holes in the state budget that were not of her making.

After another back-and-forth on President Barack Obama, one member chuckles. “You see why we keep a deputy sheriff in here,” he says. That would be N.J. Edwards, a retired state trooper and current deputy sheriff, who drops by on occasion.

“He comes in to collect child support,” one says.

The gathering is not all fun and games. A local resident facing sickness or an area businessperson who does something noteworthy for the community is likely to find a note of encouragement or thanks in the mail.

The Wisdom Table is found just steps inside the front entrance to Sherry’s, across the room from the counters where the staff serves up homemade sweets and short orders from 6 a.m to 6 p.m. “We’re trying to get in the way,” one says.

The hands on the clock pass 11 a.m., and someone notes that group members are now “on overtime.”

“I’d like to leave now,” says Brewer, “but I’m afraid somebody will tell a lie about me.”

Retired principal Robert Cannady chimes in: “What’s worse than that, they might tell the truth about him.”

One by one, the men do take their leave, as another morning passes and those who belly up to The Wisdom Table have come no closer to resolving the problems of the world.

Yet somehow, after a couple of hours here, those troubles seem a bit lighter. Perhaps the melt-in-your-mouth doughnuts from Sherry’s Bakery brightened the day. Or perhaps there is a certain wisdom to be found among the men of The Wisdom Table.

Rules of the Wisdom Table

1. Takes at least one vote to be admitted; prospective members may vote for themselves.
2. Agrees to be truthful most of the time.
3. No pistols, blackjacks, brass knuckes, knives, razors, or clubs allowed.
4. No hypnotizing or use of evil eye. Spells removed on request.
5. Entitled to free advice from membership on all matters except romance and women.