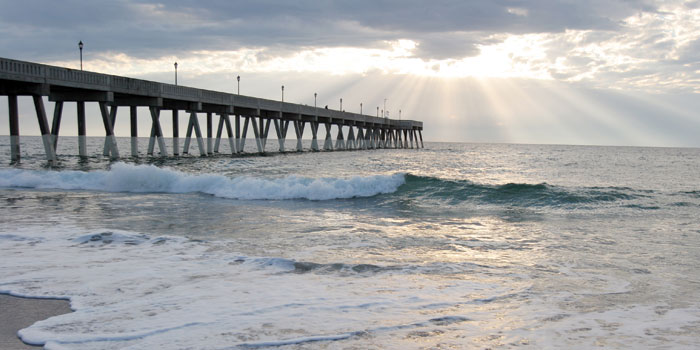 Editor’s Note: This story was originally published in July 2012.

On a Friday at King Neptune, nobody at the bar minds that the guitar player with the dreadlocked goatee is playing the same Bob Marley song for the second time in an hour.

The beer is cheap. The shrimp po’ boy comes slathered with rémoulade. And the combination of the full moon and a west wind pushes waves to five feet — a bit like the circus coming to town if you’re aquatically minded.

For the crowd inside Wrightsville Beach’s oldest restaurant, which is draped with pirate flags, the workday wrapped up at about 3 p.m. — if it started at all.

This is rush hour on the island, and it seems the only ways to disturb everyone’s mellow mind would be if Roberts Grocery ran out of chicken salad, the Lighthouse sold its last growler of pale ale, or somebody left a cigarette butt under a seashell.

Here, people follow the tidal charts more closely than the stock reports, and they’re more likely to know when loggerhead sea turtles hatch than when the latest iPad comes out.

On the bulletin boards, you find advertisements for shag lessons and stand-up paddleboarding workshops. The only thing to remember — and this is posted on signs along Lumina Avenue — is that wind speed can top 155 miles per hour during a Category 5 hurricane.

And while the cars pour onto the island with kayaks strapped to the roof racks, bikes attached to the trunk racks, and PVC pipes full of fishing poles mounted on the grill, the locals at the bar invite you to stay at their houses for free — anytime.

Just leave your car keys under the floor mat if you must block the driveway.

“If you don’t love coming down here, there’s something wrong with you,” says Tee Jones, working behind the register at Roberts Grocery. “Even when it’s raining, it’s nice.”

Life of a local

Only about four miles long, with about 2,652 year-round residents, the island stands out for what it lacks as much as what it offers.

Even on the biggest weekends, it never feels Myrtle Beach-crowded.

There’s no strip of go-cart tracks and minigolf courses. There’s no roller coaster. There’s no hat for sale with blotches of fake seagull guano stuck on the brim — at least not on every corner. There’s not a big corporate presence.

You buy food at Roberts, locally owned for almost a century, where they sell handmade salad and seashell magnets made by a kid named Hank, who lives down the street.

You stay at Blockade Runner, an independent hotel since the ’60s, and at seven stories, just about the tallest thing on the island.

You eat hot dogs at The Trolly Stop, where they only take cash.

“Wrightsville Beach is classic,” says Joe Abbate, captain of a catamaran that takes birding tours. “They didn’t get sold out to high-rises. We don’t have a McDonald’s. We had a Pizza Hut, but it went down pretty fast.”

In Wrightsville, tourists get excited when the double-crested cormorants are in town — they pay $35 for a tour to see them.

They spend half an hour watching herring gulls drop shellfish on the sand to break them open. They laugh when another gull steals the freshly cracked shell and flies away with it.

Here, this is quality entertainment.

On Capt. Joe’s tour through Banks Channel and Bradley Creek, you see little girls on their hands and knees at the shoreline, digging for clams in the mud.

You can see them even on a gray day, in a steady drizzle. On a day perfect for video games, a kid in Wrightsville finds the creatures outdoors just as compelling as the ones on a screen.

Wildlife gets monitored here like movie listings: what’s showing where.

Davin Coutu tends bar at the Oceanic, the oceanfront restaurant with a wooden pier that pushes out into the Atlantic Ocean. He used to spend his off hours and extra money on vacations until he realized that he could spend the same time and money on a boat, disappearing into hidden creeks.

“There’s nobody back there but critters,” he says. “If you like oysters, man, you never had them like when they just come out of the ground. I miss this place when I’m away.”

He dives. He fishes for drum and flounder. He follows the moon and the tides.

He doesn’t tell many people that he’s the great-grandson of former Senator Sam Ervin, the country lawyer from Morganton who helped bring down a president. But everybody at the Oceanic knows it, and they whisper it to you when Coutu isn’t listening.

“In politics, you’ve got to be intense,” Coutu says. “That’s never anything I would try to get into. But I can cook you some fish.”

Wrightsville Beach is the kind of place that makes you dislike, even distrust, other places. The idea of leaving it makes you nervous.

Sue Bridge moved here with her husband in 1953. After all that time, she still marvels that the ocean turns a different color every day. She still believes that the salt air can cure sores. So she crosses the bridge to the mainland only when necessary: once a month to pay bills.

Or in case of a hurricane. Bridge lived through Hazel in 1954, a monster storm that ravaged the East Coast. People in Wrightsville still talk about Hazel like it blew through last year.

“The day after that storm,” Bridge says, “we had the most beautiful weather.”

So at age 85, she would rather not be told that evacuation of the island is mandatory, a modern precaution.

“It’s getting more formal,” she says. “When we came here, you could park wherever you wanted to. And now, you’re required to leave in a storm. More rigid. More regulated.”

Bridge isn’t the only island-dweller to get wistful about Wrightsville’s past.

Most every restaurant and bar here hangs pictures of revelry on the island in the 1920s, when men wore suits and hats out by the surf and women boasted about being liberated because they weren’t wearing stockings.

Not too long ago, Wrightsville Beach had no roads, and the only way to get there was by boat. Then came the train from Wilmington in 1889, and the electric trolley in 1901.

In their heyday, trolleys made for 68 passengers routinely carried 100. Car No. 108 now stands on the porch of the Wrightsville Beach Museum of History.

The past is everywhere in Wrightsville. Locals constantly point out landmarks and oystering spots that no longer exist, or suggest you talk to acquaintances of theirs who really know the island — if they’re still alive.

Inside Roberts Grocery, Spencer Broadfoot just dropped his groceries at the cash register and ran home to get a copy of his grandfather’s memoirs, promising to return in just a few minutes.

“He better come back soon because he left his daggone butter on the counter,” says Jones, the cashier.

When Broadfoot returns with the book, he explains first that his great-grandfather’s name appears on all of the manhole covers in town because he ran the iron works that made them.

Then Broadfoot shares the memoirs of his grandfather, who recalled fishing off the island’s wooden trestle and waiting eagerly for the ice man to arrive on the trolley.

But the most exuberant moments in the memoirs are Broadfoot’s grandfather’s early recollections of the Lumina Pavilion, the oceanfront dance floor that was lit by so many lights that ships at sea used them as a nautical aid.

Born in 1924, Broadfoot’s grandfather saw Louis Armstrong play at Lumina, and Cab Calloway, too. The massive pavilion survived hurricanes and fires, but couldn’t withstand the change brought by cars, television, and the decline of the big band.

“Cab Calloway had so many people come to the dance, they must have turned 500 to 1,000 people away,” he wrote. “They got on the beach and went under the pavilion, just so they could hear the music.”

At one time, you could watch silent movies there on a screen mounted out in the breakers. Today, condominiums stand.

Back at King Neptune, white-haired locals at the bar say the biggest mistake the town ever made was tearing down that pavilion, forgetting that by the 1970s, it showed its age even more than Cab Calloway did.

But it’s all right. The moon is out, and the wind is blowing.

The goateed guitar player is playing “Redemption Song” again, and it sounds even better the second time.

What not to miss in Wrightsville Beach

Oceanic restaurant
With its wooden pier stretching into the Atlantic, the best place to extend a casual lunch into a seaside afternoon.
703 South Lumina Avenue
(910) 256-5551

Lighthouse Beer & Wine
A huge selection of wine, beer, and cigars makes this a great place to chat about what’s going on in Wrightsville Beach, surf-related and otherwise.
220 Causeway Drive
(910) 256-8622

Josh Shaffer is an award-winning writer for The News & Observer in Raleigh. Find more of his archived stories here.