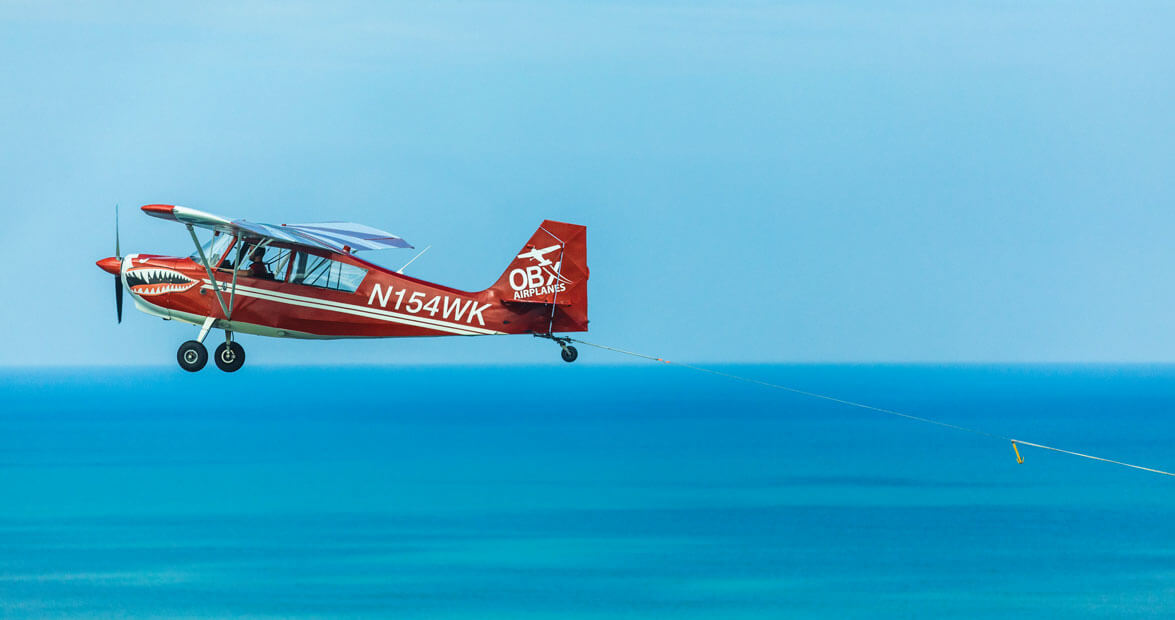 Despite having just the name for it, Jenny Hawk didn’t know how to fly. But the 20-year-old waitress was fascinated by those little airplanes that buzzed through the skies over the Outer Banks, towing ads for happy hours and discount dinner buffets. Looking for a hobby to take up between shifts at the Rundown Café in Kitty Hawk and Miller’s Waterfront in Nags Head, she decided to spread her wings. “My first lesson was a beautiful flight to Ocracoke along the coast,” she says. She was hooked, and asked the instructor what she needed to do to become a commercially rated pilot.

That was in 2008. Three years and hundreds of flight hours later, Jenny earned her commercial license and started offering flight training under the name OBX Airplanes in Manteo, a company that now specializes in just the sort of planes that once piqued her fascination. In 2012, she bought her first plane, a Cessna 150, and in 2014, she bought her second, a Citabria, her plane of choice for towing banners. She picked it up in Colorado Springs and flew back across the country, cruising at a clip of 230 miles per hour across the heartland. “I had a tailwind the whole time,” she says. “It was amazing. The tailwind gods don’t owe me a dime after that.” 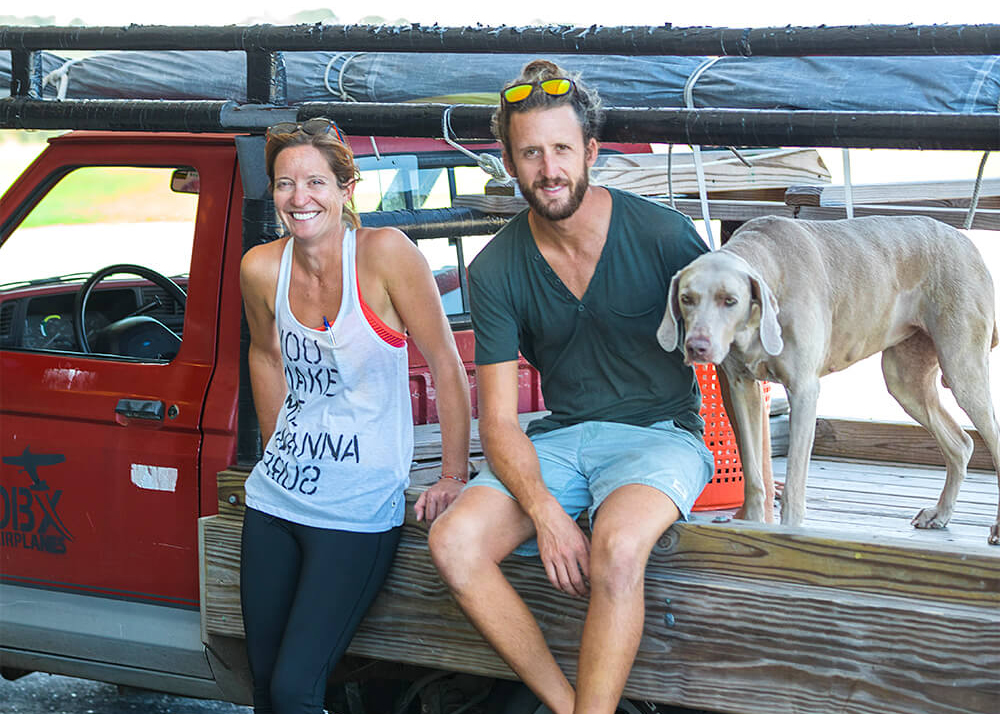 Jenny and Jesse Hawk run a tight ship at OBX Airplanes – with the help of one of the company’s unofficial canine mascots, Birdy. photograph by Baxter Miller

Jenny is toggling between two hangars at Dare County Regional Airport. In one, her ground crew is assembling the day’s advertising banners, clipping together black nylon letters the size of Jenny herself. In the other, she’s grilling chicken breasts and pineapple spears. It’s 9:30 in the morning, and this is breakfast. She’s already driven up from New Bern, where she lives with her husband, also a pilot. The air is still, and despite the shade, it’s already as hot as a storage shed in summer. A piece of pineapple falls on the ground. “Normally one of the dogs would have gotten that,” she says. There’s Birdy, a Weimaraner, and a Lab named Rudder — the unofficial mascots of OBX Airplanes.

Small and lean like a yoga instructor, Jenny is as energetic as she is efficient. On this day, she’s also issuing orders to the pilots and ground crew, double-checking schedules and charts, and preparing her plane for a long day’s work. Her brother, Jesse Hawk, who is running the ground crew, says multitasking is nothing new for his sister. Even in high school in Manteo, Jenny kept two or three jobs going, a continuation of a family work ethic learned on the Pennsylvania dairy farm where she spent her childhood.

Now, the 32-year-old owns 10 planes and employs more than a dozen people, including pilots who came from all over the country — from Chesapeake, Virginia, to Washington State — to tow banners for her company. These are the folks delivering messages straight to the beach: the happy anniversary greeting, offers of free lobster tails, deals on sub sandwiches. In many ways, the local economy depends on Jenny’s banner planes.

Most of the pilots don’t plan on towing banners forever. They’re building flight hours that will help them land jobs as charter or airline pilots, where they’ll trade in their single-engine prop planes for twin-engine jets, and their cargo of nylon and ripstop advertisements for passengers. Flying planes is expensive, and to become a first officer on an airplane you need, at minimum, 1,500 hours of flight time. For those who aren’t wealthy or trained by the military, the best way to build the requisite flying hours is through blue-collar aviation work: crop dusting, inspecting power lines, and towing banners.

This is nothing new, of course. Eight years after the Wright brothers’ historic flight in 1903, aviator Calbraith Perry Rodgers flew another of the Wright brothers’ airplanes, the Model EX, across the country in the first coast-to-coast flight. It was named the Vin Fiz Flyer, after a grape drink whose owner sponsored the undertaking. On the bottom of the wings was written “Vin Fiz,” so that astounded onlookers could read it as Rodgers soared overhead. A century of aerial advertising followed — and is still going strong.

The towline, grapple, and banner came not long after the Vin Fiz Flyer, but it wasn’t until the 1940s, when the Piper Cub — the Model T of aircraft — was mass-produced, that banner towing really took off. By the 1980s and ’90s, back when my uncle David Trickey was towing banners in Myrtle Beach, aerial advertising was as familiar to sunbathers as highway billboards. And like the pilots of OBX Airplanes, my uncle’s coworkers came from all over: Maryland, Georgia, even Somalia. Some of them, like my uncle, were kids just out of college. But many were military veterans or retirees finally getting around to following their dreams of flight, while also supplementing their pensions.

At the end of a long day in the sky, they would gather at beach bars to talk about the quality of the wind and clouds, the sharks feeding by the pier, the sun igniting the ocean. While my uncle moved on to flying larger and larger planes, those single-engine days still hold a special allure. “It was pure flying,” he says. 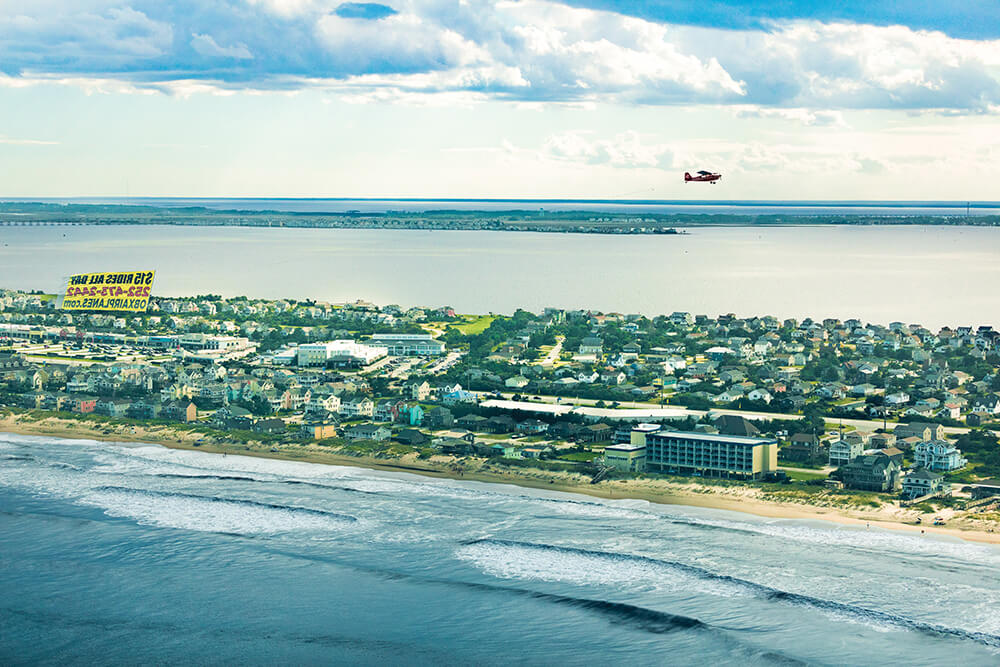 Waves and breakers may provide the backdrop for most visitors’ photos, but the best view of Nags Head’s beachfront is from high above. photograph by Baxter Miller

The OBX Airplanes ground crew, led by Jesse, is out in the airfield, laying banners across the grass. Jesse is lanky, long-haired, and tan, and, like his sister, he runs a tight ship. He waves his hand toward three banners. “These are too close together,” he says. “If a crosswind picks up and one gets caught on the other, the pilot will have to drop them immediately or risk crashing. It’s just science.”

Jesse understands the dangers involved because his sister experienced them firsthand. In 2015, a banner cable got stuck in the flight mechanism that controls up and down movement in Jenny’s beloved Citabria, and she crashed into Croatan Sound. The plane was totaled, and she spent 16 days in the hospital recovering from facial and head injuries, broken bones, and lacerations.

Pilots have died in similar crashes, but these kinds of accidents are rare. Or, as Jesse says, “It’s like winning a lottery that you don’t want to win.”

Jenny didn’t stay out of the cockpit. Today, she’s in another Citabria, a red one. Waves of heat ripple off the tarmac in front of her. Sunlight glints off the tail. The drone of her engine picks up. Then she’s in the air, her natural habitat. She releases her tow hook, a yellow metal claw dragging behind the plane on a length of rope, and flies at full power over the lead rope of the banner, which is suspended by two sticks. As soon as the rope goes taut, she pitches the plane upward at an absurdly steep angle, peeling the banner off the ground like a giant Band-Aid.

She climbs steadily, flying southeast toward the southern tip of Nags Head, her long, thin tail streaming behind. From a distance, it looks like an eel slipping through the sky. But then the words come into focus for the surfers and sunbathers below: “Miller’s Waterfront: The Only Thing We Overlook Is the Water.”