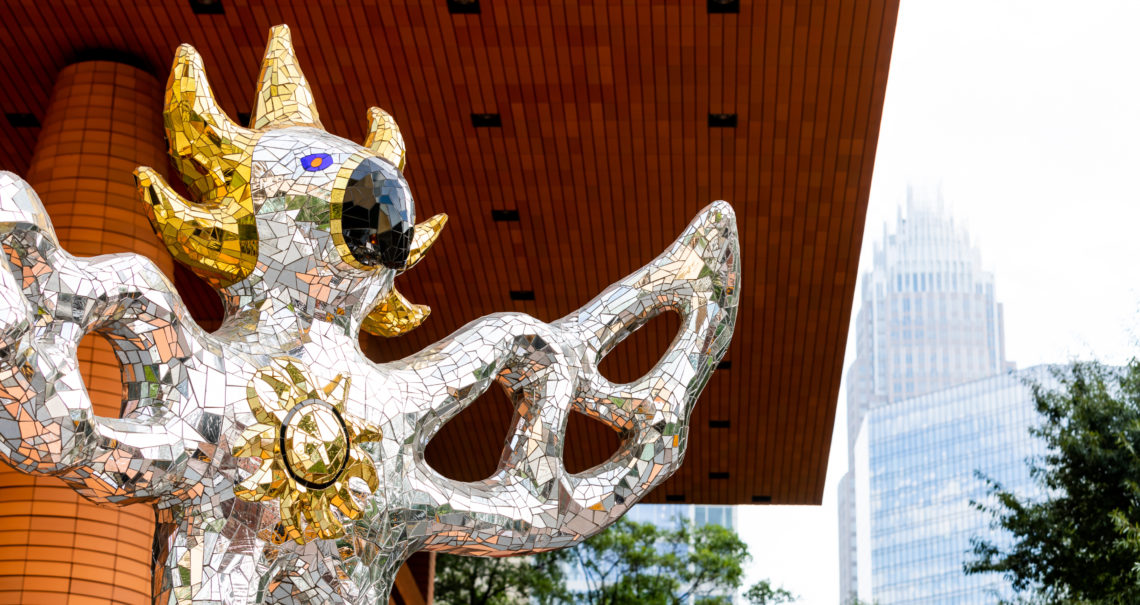 It’s an autumn Friday evening in Charlotte’s NoDa neighborhood, and artist David French welcomes visitors to an open studio. Here, ceiling-high wooden shelving is packed with originals and prints featuring Charlotte’s most iconic destinations. What began as an art class assignment to paint notable neighborhood places turned into a series of commission projects, which led to French’s first skyline.

More than 450 paintings later, French’s vivid scenes of neighborhoods, breweries, landmarks, and stadiums offer place-in-time snapshots of a city ever in flux. From his shop’s NoDa homebase to South End, Uptown, and Camp North End, eclectic enclaves across the Queen City give artists a haven for self-expression. Read on for a few of our favorite boroughs — and where to shop when you arrive.

After moving to Charlotte to study engineering (then English, and ultimately art), French recalls being particularly drawn to an area that had once been the turn-of the-century textile epicenter known as North Davidson Mill Town. After mill closures left the neighborhood in need, a pair of forward-thinking artists, Ruth Ava Lyons and Paul Sires, had a vision for an art district. They opened a gallery and a renaissance took off, rapidly attracting a who’s who of area artists, including French in 1999.

NoDa (short for the main thoroughfare, North Davidson Street) is still one of the most laid-back and art-centric spots in the city, French says: “There’s always something to seek out, look for, and find. Every place in the neighborhood has art in it — there’s art on the walls of restaurants, cafes, bars, and all.” Exteriors are caked with layers of lore and longevity, too, as whimsical murals enliven edgy blocks. 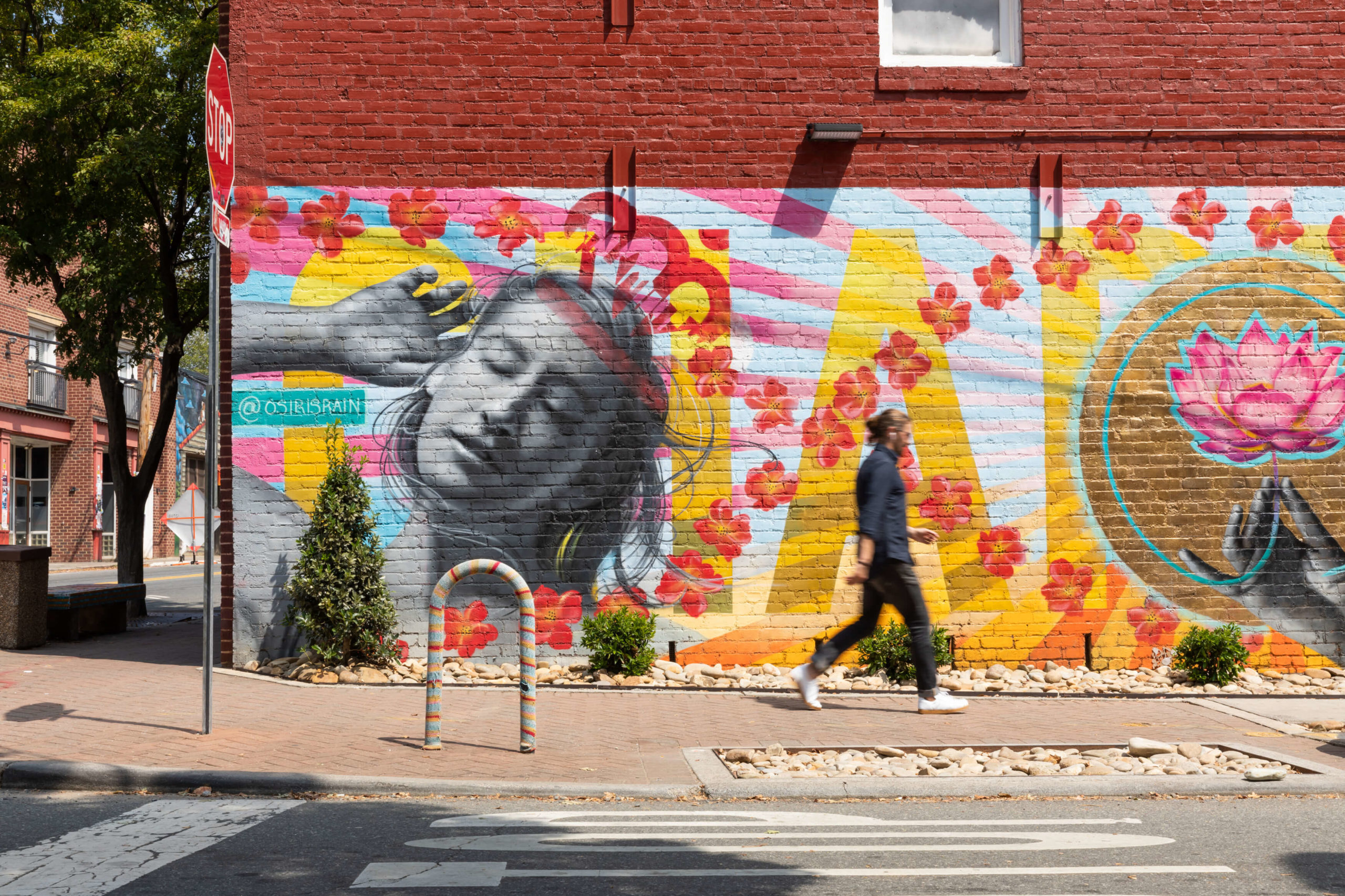 Between stops for coffee or cocktails, shop local take-home treasures at Ruby’s Gift, browse the work of 40 Charlotte artists at the pop-up TAC Gallery, and select fair-trade items from around the world at Pura Vida Worldly Art.

And newer to NoDa, but not to the region, the Charlotte Art League Gallery is the city’s oldest nonprofit visual arts organization. In addition to a public gallery, CAL has working studios, classes, and other programming to support community culture.

Just a short light rail journey down South Boulevard, the youthful South End neighborhood is the place to see and be seen. Once the site of Uptown’s expanded gold rush and later anchored by Atherton, the 19th-century cotton mill-turned-market and mixed-use complex, South End is now known for its booming breweries and trendy restaurants. 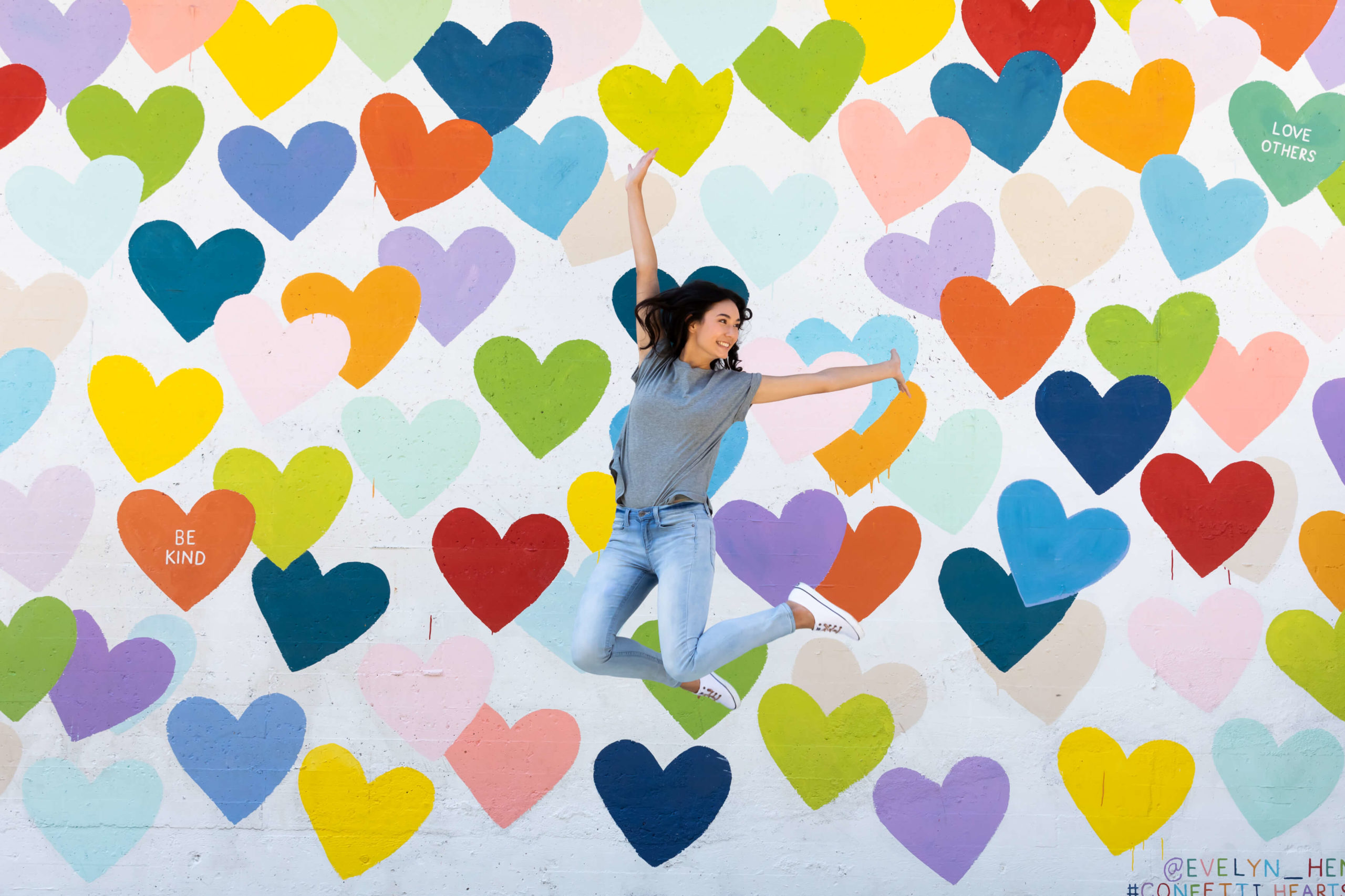 Snap a picture at the Confetti Hearts Wall in South End. photograph by Kate Magee

Some featured destinations include C3 Lab, Elder Gallery of Contemporary Art, and Hodges Taylor, the city’s longest-running commercial art business. Although the official crawl is currently on hold, many galleries have reopened and are eagerly inviting visitors, Kennedy says. The three-story Dilworth Artisan Station, for example, is a factory-turned-hotbed of creative activity, housing studios for more than two dozen artists. “Using restored spaces this way gives South End the character communities desire, and adds to the welcoming energy you feel as you walk around here,” Kennedy adds.

At the intersection of Trade and Tryon streets in Uptown, where a Native American trading path once ran, soaring bronze sculptures — themed transportation, commerce, industry, and future — mark facets of Charlotte’s past and nod to what’s to come. In the blocks surrounding, scores of skyscrapers uphold the bustling business core, while galleries, museums, and public art keep culture on the forefront.

Inside a former Presbyterian Church, the McColl Center for Art + Innovation houses a nationally known artist residency program, an exhibition space, and a studio for large-scale sculptures. On the first floor of the Foundation for the Carolinas’ headquarters is the vast, and mostly glass, collection of the Sonia and Isaac Luski Gallery.

Art even seeps into stadiums here, such as at the Spectrum Center, which features a duo of oversized 24-foot murals by 50-year-career artist Tommie Robinson. More of his groundbreaking works can be found in the visionary Harvey B. Gantt Center for African-American Arts + Culture.

One of the best cultural deals in town is the Levine Center for the Arts Access Ticket, which, for $20, grants two-day admittance to a trio of acclaimed art institutions: the Bechtler Museum of Modern Art, the Gantt Center, and Mint Museum. Or, for an al fresco, self-guided experience, ArtWalks CLT maps out dozens of free neighborhood art walks that are easy to follow on any phone. Thanks to the work of groups like Brand the Moth, a Charlotte mural and public art nonprofit that also sponsors a META Mural Residency, the city’s diversity representation is a priority. 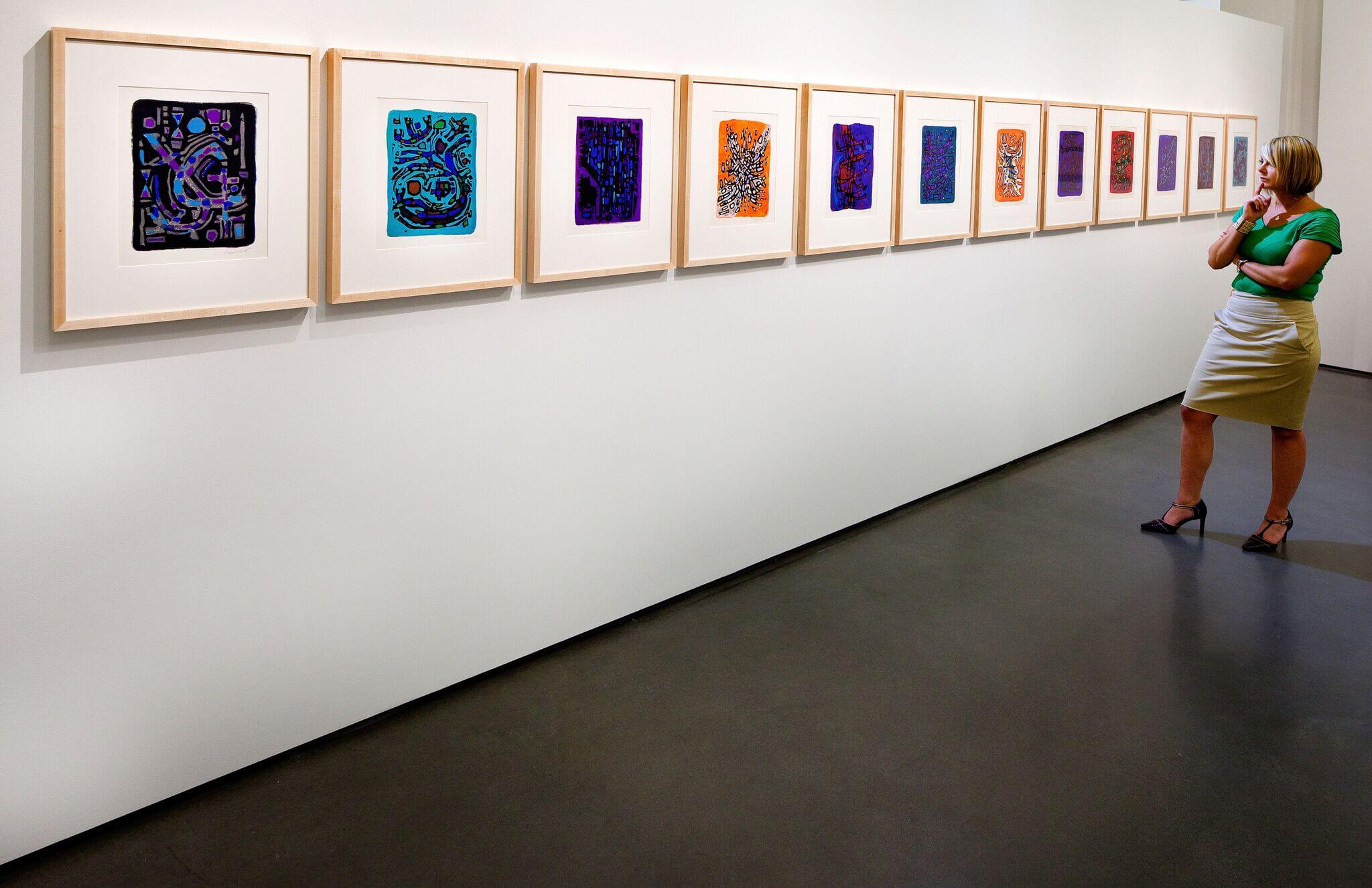 Stroll through the Bechtler Museum in Uptown. photograph by Charlotte Regional Visitors Authority

Not to be missed along Tryon Street, three words continue to make a mighty impact. Taking up an entire Uptown block between Third and Fourth streets, the history-making Black Lives Matter mural is a powerful collage of imaginative styles and colors that went from conception to completion in just a couple of days this June. Participating artists were selected from across Charlotte, including some of whom are part of the studio collaborative BLK MRKT CLT in nearby Camp North End.

“The Black Lives Matter mural is a testament to the strength and talent of Charlotte’s artist community, especially the BLKMRKT collective that spearheaded such an impactful installation on a quick timeline,” says Varian Shrum, Camp North End’s community manager. “The positive response further underscores the value of public art and its ability to bring people together around important causes.”

Dari Calamari is an abstract artist who painted the mural’s “R.” She told Charlotte Is Creative that her goal with her art is to stir emotion: “My letter is the ending of an impactful mural that makes a profound statement and symbolizes the setting of one phase leading into the emergence of another — a collective shift into a new day where true compassion and love for each other radiate from our core.”

A mile from Center City, in a 76-acre former industrial site where both Model T cars and Hercules missiles were once assembled, a new community is taking shape. Called Camp North End, the decades-long project kicked off in 2017, and will eventually feature more than three million square feet of shops, restaurants, offices, lodging, and public spaces.

Along with Camp North End’s explosive growth, art has been there from the start. In fact, among the neighborhood’s first tenants was the nonprofit Goodyear Arts, which seeks out underused buildings. Photographer Amy Herman, co-founder and co-director of the artist-led group, says Goodyear Arts’ goal is to give local artists the necessities of time, space, money, and community. Its core programming is a six-week residency, which culminates in an exhibition. And since studio space is often offered to artists on a more permanent basis once they’ve completed the program, Herman says Goodyear Arts ultimately helps Charlotte retain talent. 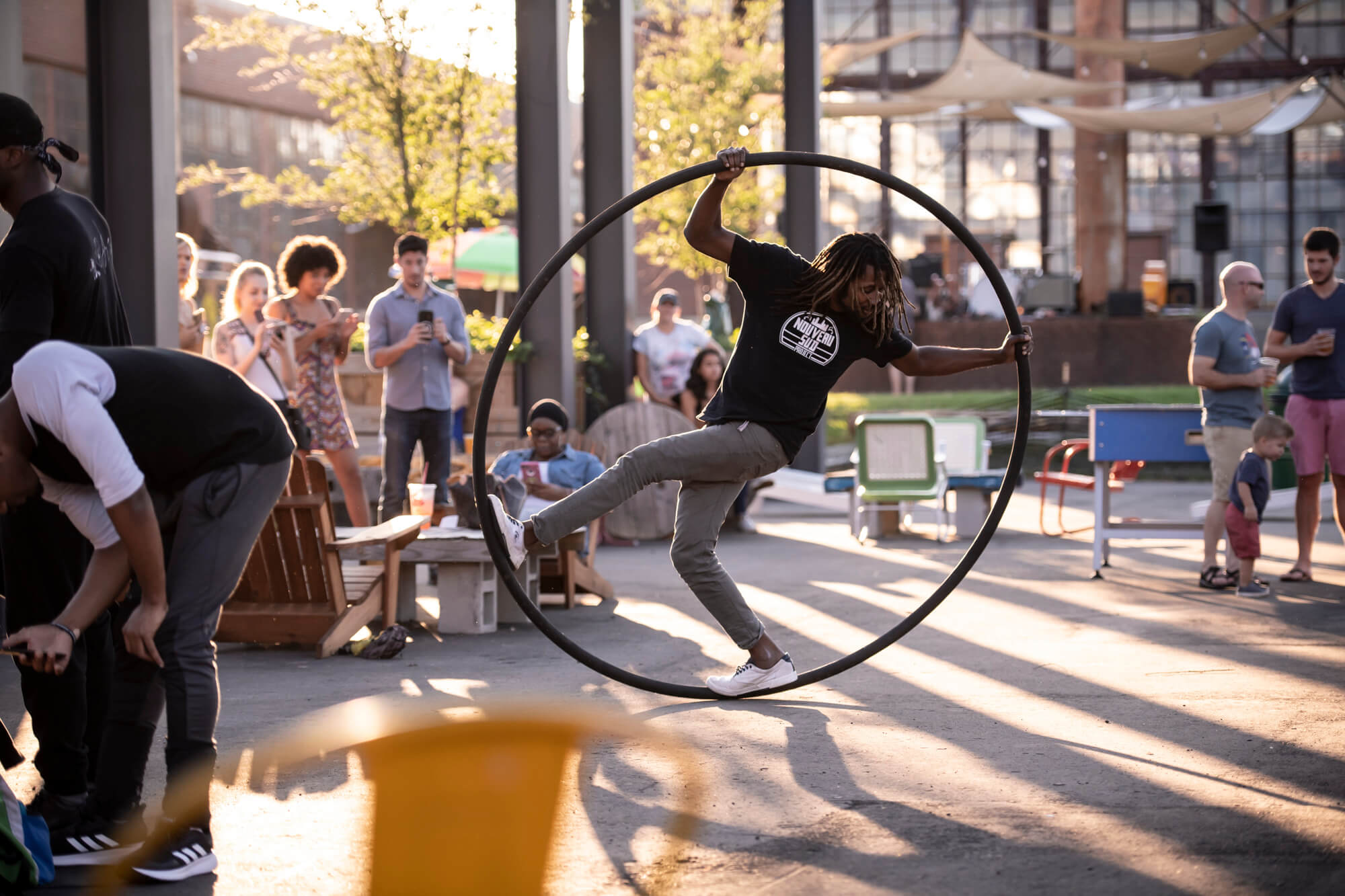 Renee Cloud, a text artist, is both an alum of the program and its collective manager. “The residency absolutely changed the way that I made work and my outlook on a lot of things,” says the Queen City native. “It restrengthened my hopes of being an artist in Charlotte and having an impact here.”

Elsewhere in the neighborhood, muralists make their mark on windows, walls, and loading docks, and artists can often be spotted at work in studios like BLK MRKT CLT, DUPP&SWAT, and Windy O’Connor Art and Home.

“The overall vibe of Camp North End is community focused — everything is really intentional,” Herman says of Goodyear Arts’ third location. “I think this is a really unique way of growing an area because we’re not just tenants, we’re a community. The investment is further than just signing a lease — we’re connecting separate communities into a larger ‘Camp Fam.’”

As for Cloud, she says she sees only more possibility for her hometown. “Neighborhoods offer proximity, which fosters a spirit of collaboration. There are lots of new people here and with that an opportunity to help shape the arts scene into one that’s more inclusive, challenging, and connected.”