Zwelibanzi Moyo was in her early 20s when she met the love of her life. The year was 1999, and she’d just arrived in Durham from southern Africa to study hospitality and tourism at North Carolina Central University. That’s where she ran into Leonardo Williams. For a few months, the two were inseparable, as close as friends could be. Zweli shared with Leo the chilling accounts of her life growing up amid civil war in Zimbabwe. Leo regaled Zweli with stories of his own childhood in rural Halifax County.

The two bonded over food. Zweli could cook — oh boy, could she cook. Leo was blown away by the combination of spices and peanut sauce she used in her collard greens, the tenderness of the oxtail she prepared, and the rich texture of the Zimbabwean ground cornmeal porridge that she called sadza. He’d never met anybody like Zweli. And she’d never met anybody like Leo. They were smitten with each other, in love with love. 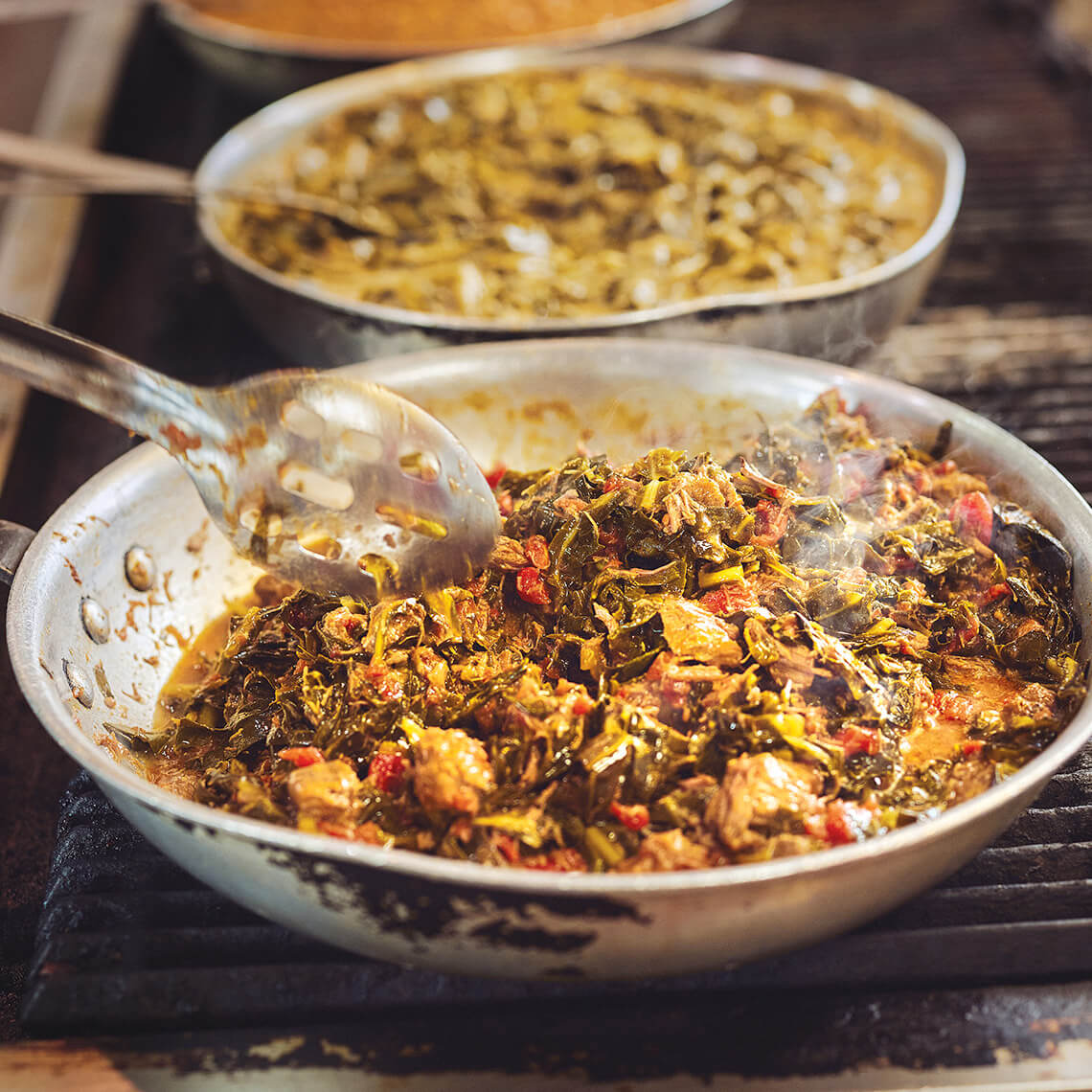 And then, as young lovers often do, Zweli and Leo went their separate ways. She moved on with her life, eventually graduating in 2003 and landing jobs at various Triangle-area restaurants and fitness centers. He graduated, too, and worked for many years as a music teacher and then an administrator with Warren County Schools and the North Carolina Department of Public Instruction. But neither Zweli nor Leo ever forgot about each other. Their lives were somehow incomplete.

Fast-forward to 2014: After a few near misses over the previous decade, Zweli and Leo reconnected. They began talking by phone, reminiscing, eventually dating, and within a year, they were married. It took some time, but Leo was able to persuade Zweli to open a restaurant so that others could enjoy the food that had so turned his head more than 10 years earlier. As it turned out, Zweli’s Piri Piri Kitchen became the first known Zimbabwean restaurant in the United States.

As she tells the story of their courtship, Zweli turns to Leo and smiles. He smiles back. The two are sitting so close together at a patio table outside Zweli’s Café, which they operate on Duke University’s campus, you’d think they were waiting for others to join them. But no, this is just the way they interact — bodies touching, eyes often fixed on each other, hands clasped together.

Dressed in a light blue button-down shirt, Leo is spending an hour or so with his wife before heading out later to a meeting of the Durham City Council, to which he was elected last year. Zweli, wearing a black ball cap and T-shirt, has been working the noon rush. Their café at Duke is the satellite location of the original Zweli’s Kitchen, about five miles southwest on Durham-Chapel Hill Boulevard. They plan to open a third location, the higher-end Zweli’s Ekhaya, this fall at the American Tobacco Campus downtown.

Being able to share a little slice of her home country with new friends in her adopted hometown of Durham has been nothing short of cathartic for Zweli. “People who wouldn’t be able to go to Zimbabwe, they say, ‘Well, now I’ve had Zimbabwean food,’” she says. “When you walk into the Kitchen, you feel like you’ve been transported to a different place. And that’s the kind of experience I want people to have. I want them to be like, ‘I feel like I’m in Zimbabwe.’”

The first thing you notice when you walk into Zweli’s original location, in a nondescript strip mall where Durham meets Chapel Hill, is the music: the gentle tinkling of thumb piano, or mbira; the ancient pounding of the conga-like Ngoma drums; the gritty, haunting voices of singers like Oliver “Tuku” Mtukudzi and the great revolutionary poet and musician Thomas Mapfumo, known as “The Lion of Zimbabwe.” The second thing you notice are the splashes of red, yellow, and blue; the warm wooden surfaces of the tables and shelving; and the art — handcrafted bowls, vases, and drums, and a painting of Zimbabwe’s “Big Five” animals: the lion, African elephant, Cape buffalo, leopard, and rhinoceros. Most of all, you notice the delicious olfactory overload: the tingle of piri piri peppers, the richness of curry, peanut sauce, chicken, yams.

Two days after Leo joined Zweli on Duke’s campus, he’s sitting at a table in the center of Zweli’s Kitchen, explaining how best to enjoy a Zimbabwean meal. “This food is extremely layered,” he says. “It has multiple flavors, and they come at different times, sometimes all at once.” His background as the conductor of high school bands surfaces: “So the first thing I’m going to have you do is taste the mildest — and that would be the dovi collards.” Those are collard greens cooked with peanut sauce. Earlier, Zweli had said of them, “I know that sounds weird, but it’s really delicious.” And she was right. 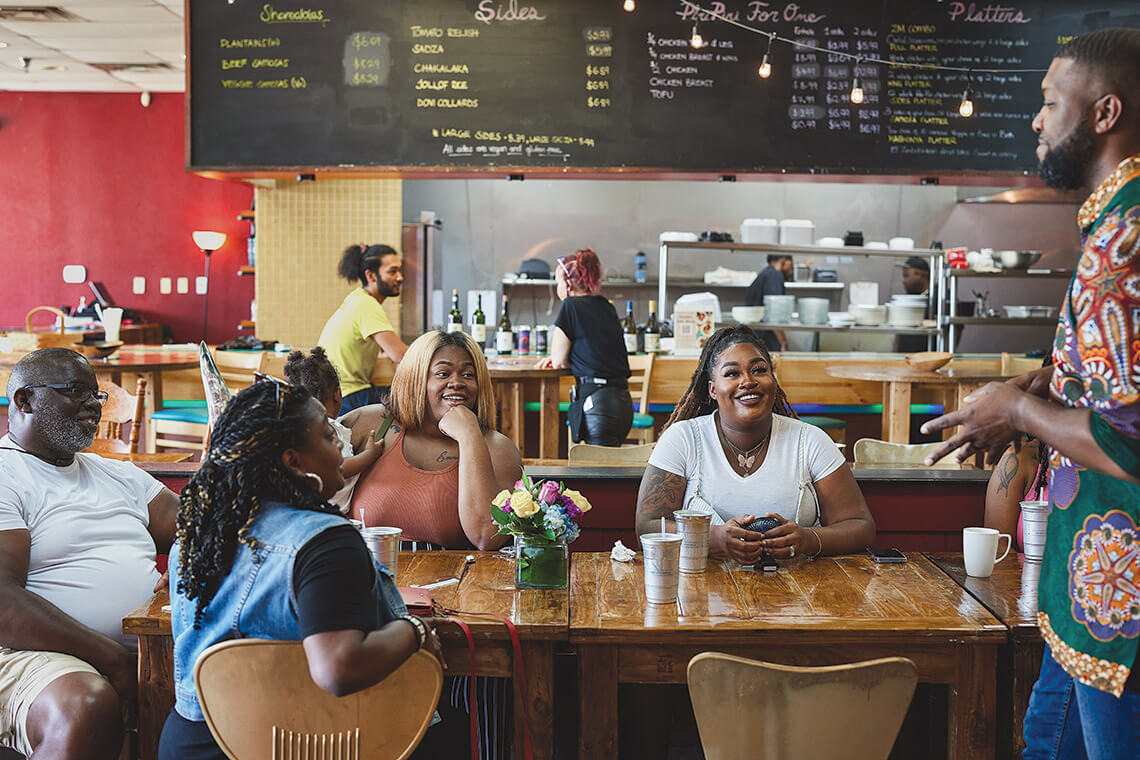 A woman arrives at the table with another dish. She’s Leo’s mother, Yolanda. Zweli’s is a family business. Not only is Mom a server at the restaurant, but she also wrote the colorful chalkboard menu next to the bar. Leo and Zweli’s 16-year-old son, Izaiah, works here, too, doing everything from washing dishes to serving customers.

Scattered about the restaurant are an older couple at a small table at the front, a younger couple with their infant in the middle of the room, and two groups of diners engaged in animated conversations at a pair of large tables in the back. Leo yells hello to the table of seven, and a young man, Adante Hart, a prominent Durham dietitian, ambles over for a chat. “Adante brings food bloggers from all over the world to restaurants that he likes,” Leo says. “I’ll get a text from him — ‘Hey, Leo, I’m bringing such-and-such by’ — and I’ll make sure that I’m here to meet them.”

Zweli’s has gotten lots of attention over the past couple of years: In 2020, the Williamses were invited to the presidential debates in Nashville. And on this very day, Leo got a call from a bigwig at Facebook, who’s planning a trip to Durham and wants to drop in for dinner. But it’s the Durham community that Leo and Zweli are most interested in impressing. And the couple has succeeded despite facing major challenges over the past two years, including nearly losing the business due to the Covid-19 crisis. 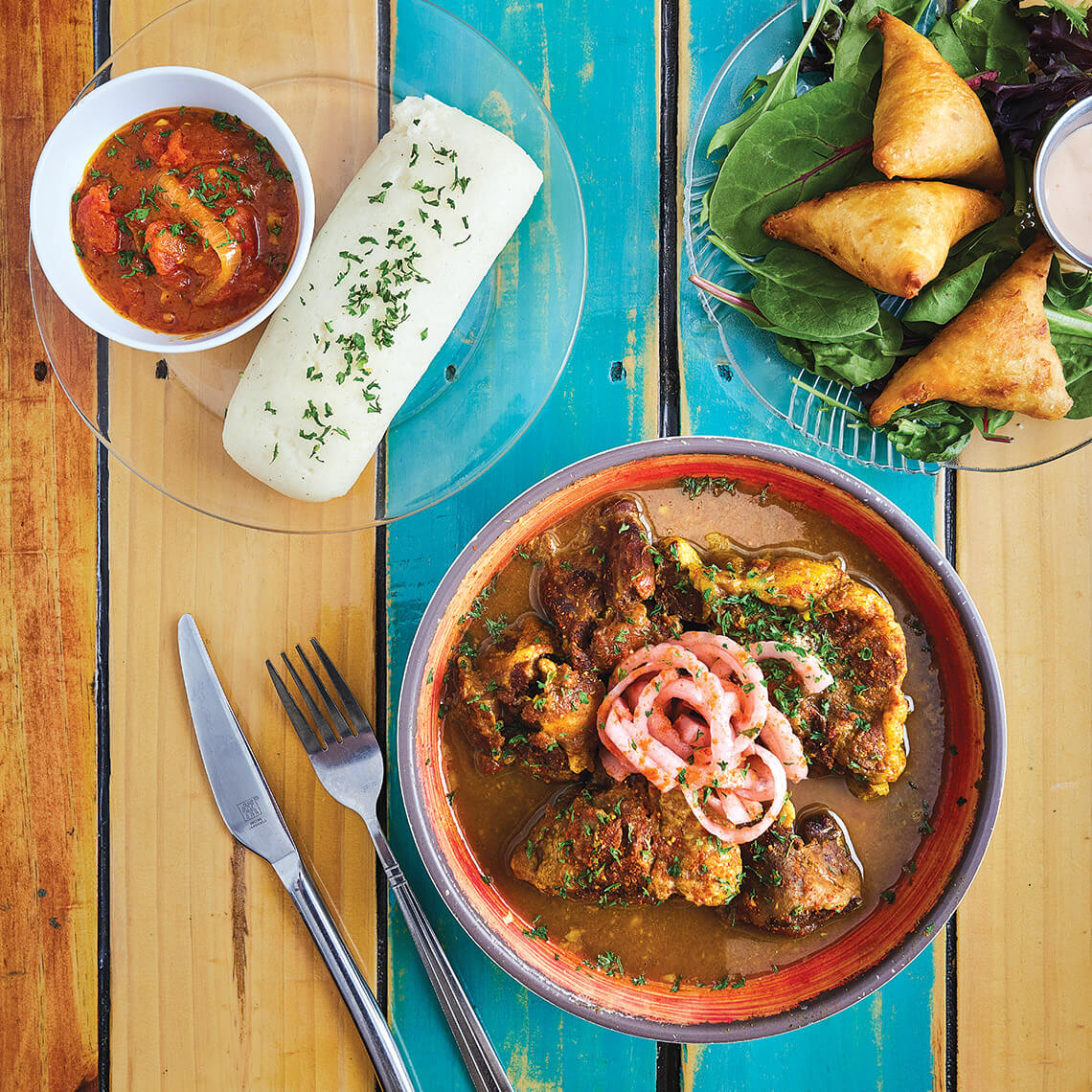 During that time, a disaster also struck the city: In early 2020, carbon monoxide leaks forced hundreds of families to evacuate from Durham’s McDougald Terrace public housing project. Since Zweli and Leo assumed that they were going to lose their restaurant anyway, they decided to rally their neighbors and cook tons of food for the families in need. “We’d been doing catering,” Leo says, “so we said, ‘OK, we’ll just take whatever we have left over in our refrigerators, we’ll cook it, donate it, and move on with our lives.’”

That decision set in motion a series of events that would find Leo at the center of a movement among small-restaurant owners in Durham. Through his and others’ efforts, they created the Durham Small Business Coalition and ultimately raised $3 million to save local businesses. Shortly thereafter, Leo ran for and won a seat on the city council. These days, he’s become a sort of ambassador for independent business owners in Durham. But initially, he says, “we didn’t ask for a dime. We just wanted to do the right thing.”

One day last year, Zweli and Leo were at home watching High on the Hog: How African American Cuisine Transformed America when Leo had an epiphany. He was hardly the only Black American to experience such a jolt while viewing the documentary series that had put together the pieces of America’s culinary history and found that much of what we eat comes directly from ancient traditions traced back to sub-Saharan Africa. Leo could relate to this. He felt an immediate connection — this was his current world, his day-to-day life.

Earlier, when Leo and Zweli were deciding what to name their restaurant, he was adamant that they give it her name so that others could learn the remarkable details of her life in the same way that he had: through her cooking, her resolute personality, and her empathy for those who suffer.

Zweli was born in 1977 in the Matabeleland area of Zimbabwe, then known as Rhodesia. At 2 years old, during the region’s civil war, she was separated from her parents and suffered five years of malnutrition before reuniting with her family at age 7. That traumatic experience, she says, is what gave her the deep appreciation for food that would chart the course of her life. 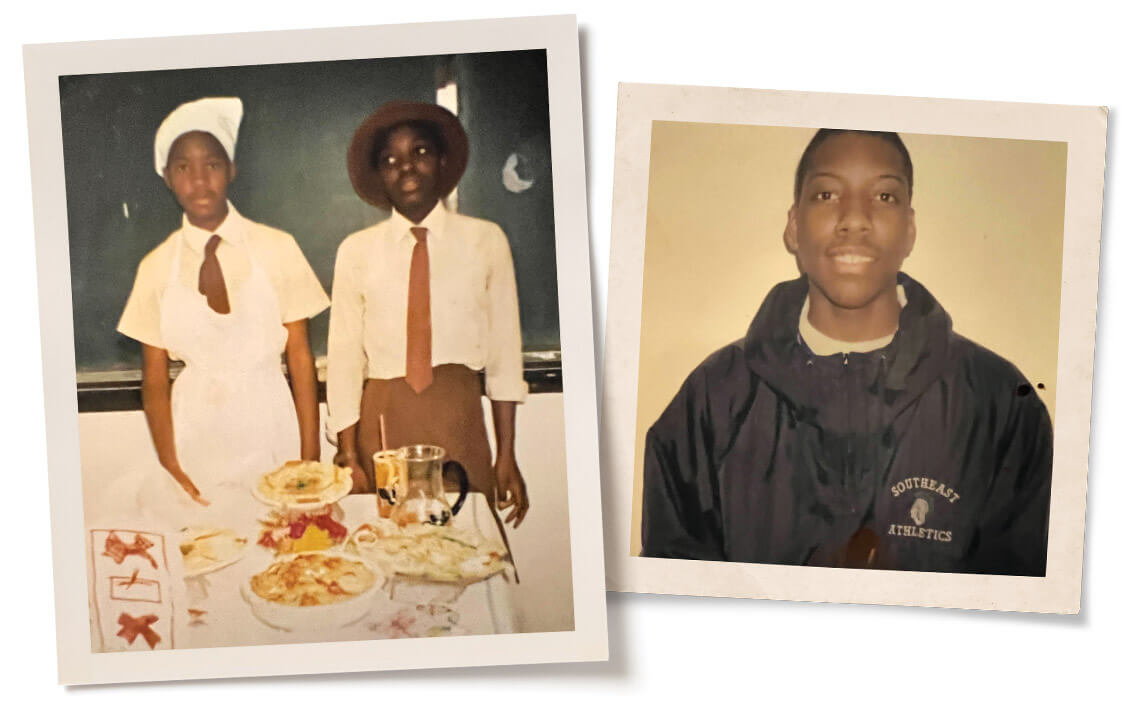 At 16, Zweli and Leo had very different interests — cooking in Zimbabwe and basketball in Halifax County, respectively. But they both had a bright future ahead of them. They just didn’t know that future would be together. Photography courtesy of Leo and Zweli Williams

Zweli’s story had struck a primal chord within her husband. Leo was born and raised in rural North Carolina, a descendant of enslaved people who experienced profound traumas not unlike those that his wife had endured as a little girl. What’s more, Leo directly identified with some of Zweli’s later childhood memories, especially those involving the foods she grew up eating after she was returned safely to her family.

“And even beyond the food,” Leo says. “I was surprised, having grown up in eastern North Carolina, at how similar my lifestyle was to her lifestyle growing up in Zimbabwe. In Halifax County, we walked around outside with no shoes on, we grew everything on our property, we had chickens. On the side of our house was the garden; in front were all the fruit trees. So when Zweli and I were sitting there watching High on the Hog” — he pauses and shakes his head, emotion imprinted in the furrows of his brow — “I mean, wow! It explained everything. It brought it all together. This world really is much smaller than we think it is. It’s big and far in distance, but it’s small and close in culture.”

Zweli turns, smiles again at her husband, and lightly squeezes his hand. It’s no miracle that she and Leo reconnected more than a decade after each went their separate ways. As Zweli puts it — without a hint of reservation — “It was destiny.”