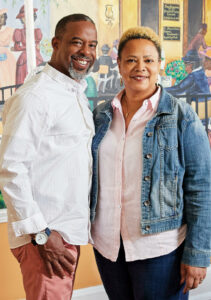 Daniel and Monica Edwards made their bed-and-breakfast dream come true in Durham. photograph by Eric Waters

After her first night in a bed and breakfast, Monica Edwards was hooked. Soon after, she and her husband, Daniel, started visiting bed and breakfasts across North Carolina, comparing notes and sharing ideas for opening their own inn — what is now Morehead Manor in Durham. “At all of the inns we went to, we noticed that once the innkeepers checked us in, we never saw them again until breakfast,” Monica recalls. “Part of the experience here is that we are ambassadors for the area.”

It’s not hard to champion a city that has so much going on: A former tobacco manufacturing site was redeveloped into the American Tobacco Campus, a hot spot for restaurants, retail, and entertainment; the Durham Performing Arts Center opened in 2008 and fast became a staple of downtown arts and culture; and countless new condo and apartment buildings have changed the skyline. “Durham is a great place for entrepreneurs,” Monica says. “There are a lot of efforts to promote, grow, and support local businesses.”

Durham worked hard to earn its spot on the “Best Places to Live” lists. Thanks to its history as a working-class city with an abundance of bars and brothels, it became known as “Dirty Durham,” a label that has stuck for almost two centuries. Now, locals have reclaimed the once-derogatory moniker, declaring that it embodies the tenacity that helped build the city. That spirit made Monica, who grew up in Southern Pines, want to call Durham home. “Durham is such a diverse and progressive community,” she says. “It’s got true grit. We take pride in being ‘Dirty Durham.’” 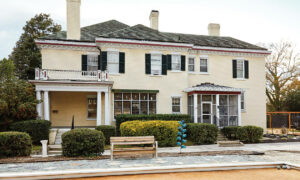 Morehead Manor. The Edwardses knew that this five-bedroom residence in the historic Morehead Hill neighborhood was perfect for an inn. “Touring this house was like walking through a mini Biltmore,” Monica recalls. The problem: It wasn’t on the market. But thanks to a mutual connection and strong negotiating skills, the couple purchased the 1910 mansion that once belonged to tobacco executive James Cobb and turned it into a bed and breakfast. Inside, they’ve retained original details, from woodwork and fireplaces to vintage sinks and an icebox. Outside, modern metalwork highlights spaces for entertaining, including a firepit and a bocce ball court.

Durham Performing Arts Center. It might be a 2,700-seat theater, but “there isn’t a bad seat in the house,” Monica says. The $48 million project was completed in 2008, and DPAC fast became a prime spot to see events ranging from Broadway shows and concerts to stand-up comedians.

Carolina Theatre. In 1978, this historic theater closed and was slated for demolition. “People went to bat to save it,” Monica recalls. Now, it’s a cultural institution. In addition to a full slate of live performances and films, the theater is home to “Confronting Change,” an exhibit about the local Civil Rights movement. The exhibit is located adjacent to the second-floor balcony, the area reserved for African American patrons, who had to climb 97 steps to reach their seats in the once-segregated theater. “Take a tour to really appreciate the history,” Monica says. 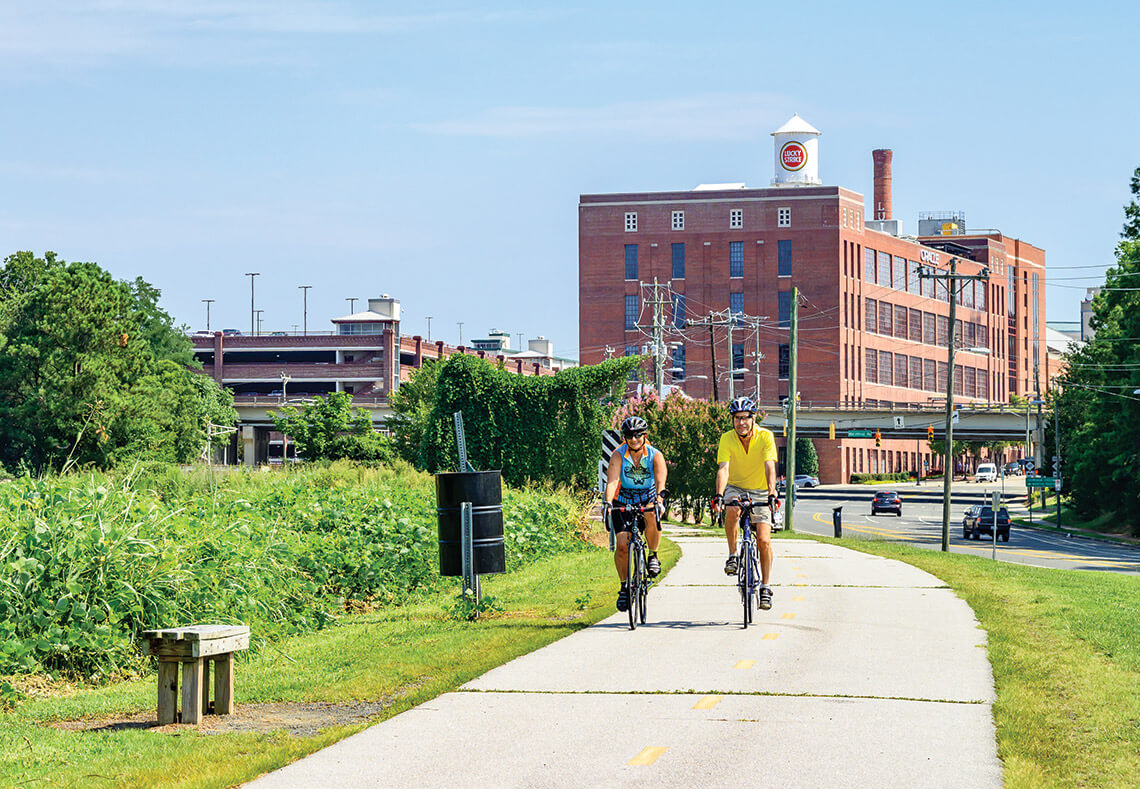 Take a bike ride on the 12-mile section of the American Tobacco Trail that passes through Durham. Photography courtesy of VisitNC.com

American Tobacco Trail. This 22.6-mile trail, passing through Durham, Chatham, and Wake counties, used to be part of the Norfolk Southern Railway line that moved tobacco crops from fields to the American Tobacco Company for manufacturing. In Durham, a 12-mile section connects neighborhoods, shops, and restaurants, and is a popular spot for recreation.

Durham Bulls Athletic Park. Sit under the lights at the baseball stadium to watch the Durham Bulls take the field. The minor league team attracts major crowds. “Durham comes out for the Durham Bulls,” Monica says. “There is a fireworks show after every home game.”

Related: Bull Durham Beer Co. Hits One Out of the Ballpark

Sweets by Shayda. The rainbow-colored macarons taste as good as they look. Shayda Wilson, a Cordon Bleu-trained pastry chef, opened this brick-and-mortar shop to capture the spirit of a French bakery and found sweet success in downtown Durham.

Jack Tar & The Colonel’s Daughter. Located on the ground floor of the Unscripted Durham hotel, this retro diner can satisfy all your comfort-food cravings. Sit at the counter or slide into a booth and order burgers, hot chicken, and pork chops, or stop in for brunch (hello, mimosas and orange brioche French toast!). 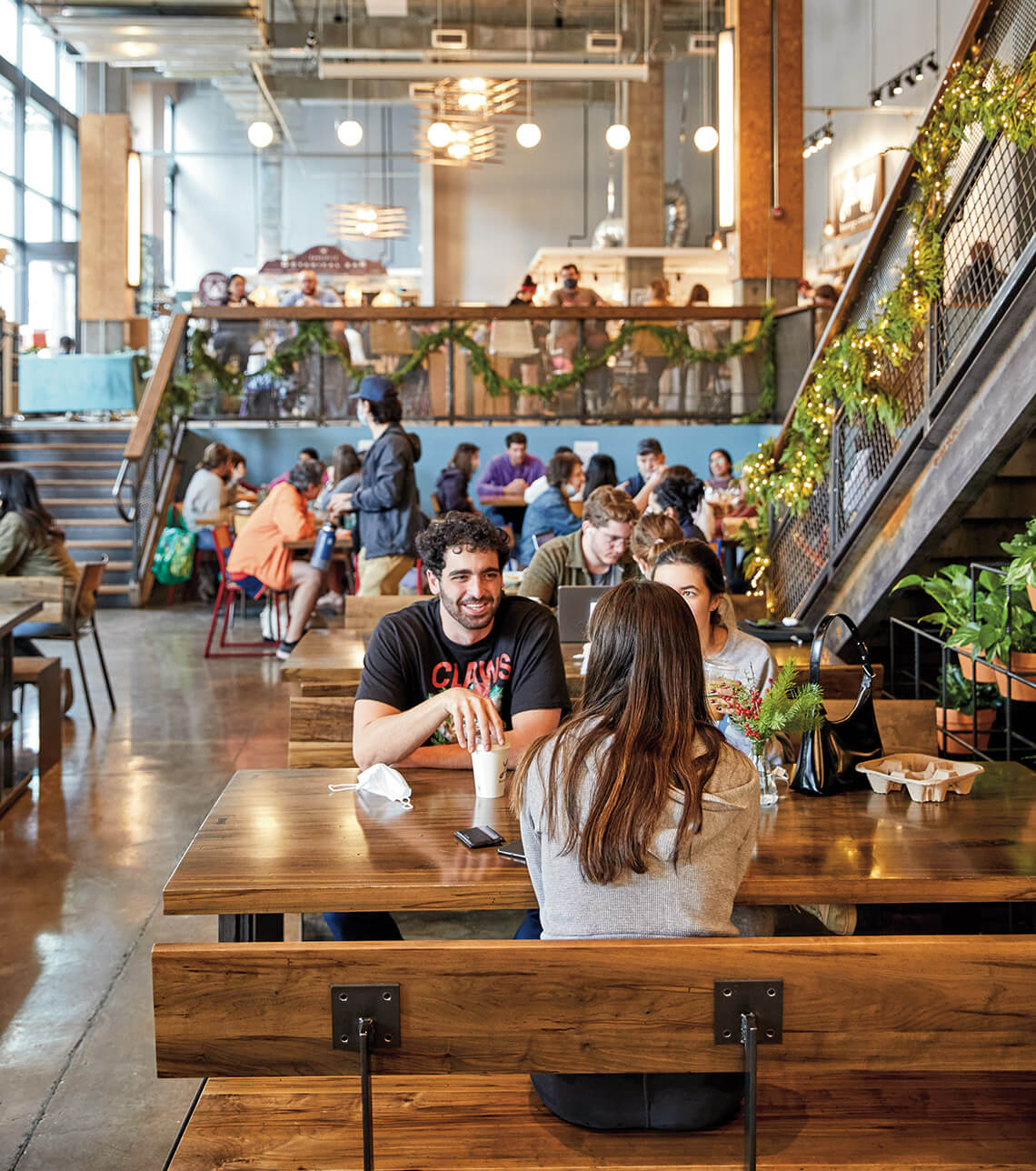 Grab lunch and a beer at Durham Food Hall. photograph by Eric Waters

Durham Food Hall. Can’t agree on where to eat? Monica Edwards suggests heading to the Durham Food Hall, home to a diverse mix of dining and drink concepts. Order roasted oysters from Locals Oyster Bar, Louisiana red beans and rice from Lula & Sadie’s, or margherita pizza at Napoli. For a nightcap, try Riggs Lounge or the Auctioneer Bar.

Corpse Reviver Bar & Lounge. If local legend is true, this basement bar was once a coffin shop. Now, the building is home to Durham Distillery’s cocktail bar. The lounge opened in 2020 and developed a menu that showcases award-winning craft spirits like Conniption Gin. There’s food, too: A dirty martini pairs well with whipped goat cheese and marinated olives. 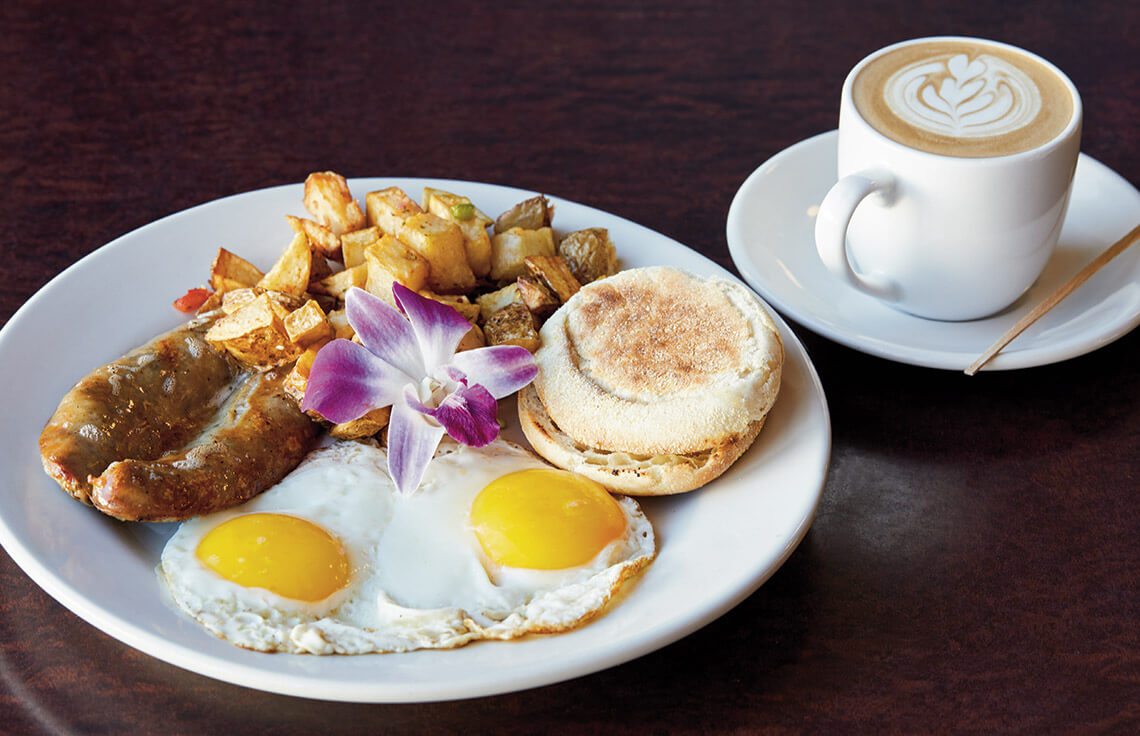 Stop by Beyu Caffe and get a Beyu Breakfast with the Heart & Soul Signature Blend coffee. photograph by Eric Waters

Beyu Caffe. This neighborhood coffee shop supports its neighbors. Order a cup of locally roasted coffee (the Heart & Soul Signature Blend is a favorite) and the Beyu Breakfast, and stay for the “everyone is welcome” vibe. A portion of coffee sales supports the Beyu Food Project, a nonprofit combating food insecurity in Durham.

Fullsteam Brewery. The beers at this plow-to-pint brewery are made with as many locally farmed and foraged ingredients as possible — even the grains and hops used in the small batch beers are from North Carolina farms. Order a can of Carver, a sweet potato lager, or pop the top on a Paycheck, a pilsner made with local barley. The brewery also features a rotating selection of seasonal and specialty brews. The commitment to all things local extends to the food menu: Try the sweet potato tots and the pimento cheese burger to satisfy your hunger and support North Carolina farmers.

Letters Bookshop. Walk through the doors and get lost among the stacks. This shop, which opened in 2013, just moved to a new, larger location in downtown in a former bank. More shelf space means an even bigger selection of new and used fiction (but the same well-read staff, who are happy to recommend their favorites). “Durham has a lot of talented local authors, and Letters carries their books,” Monica says. 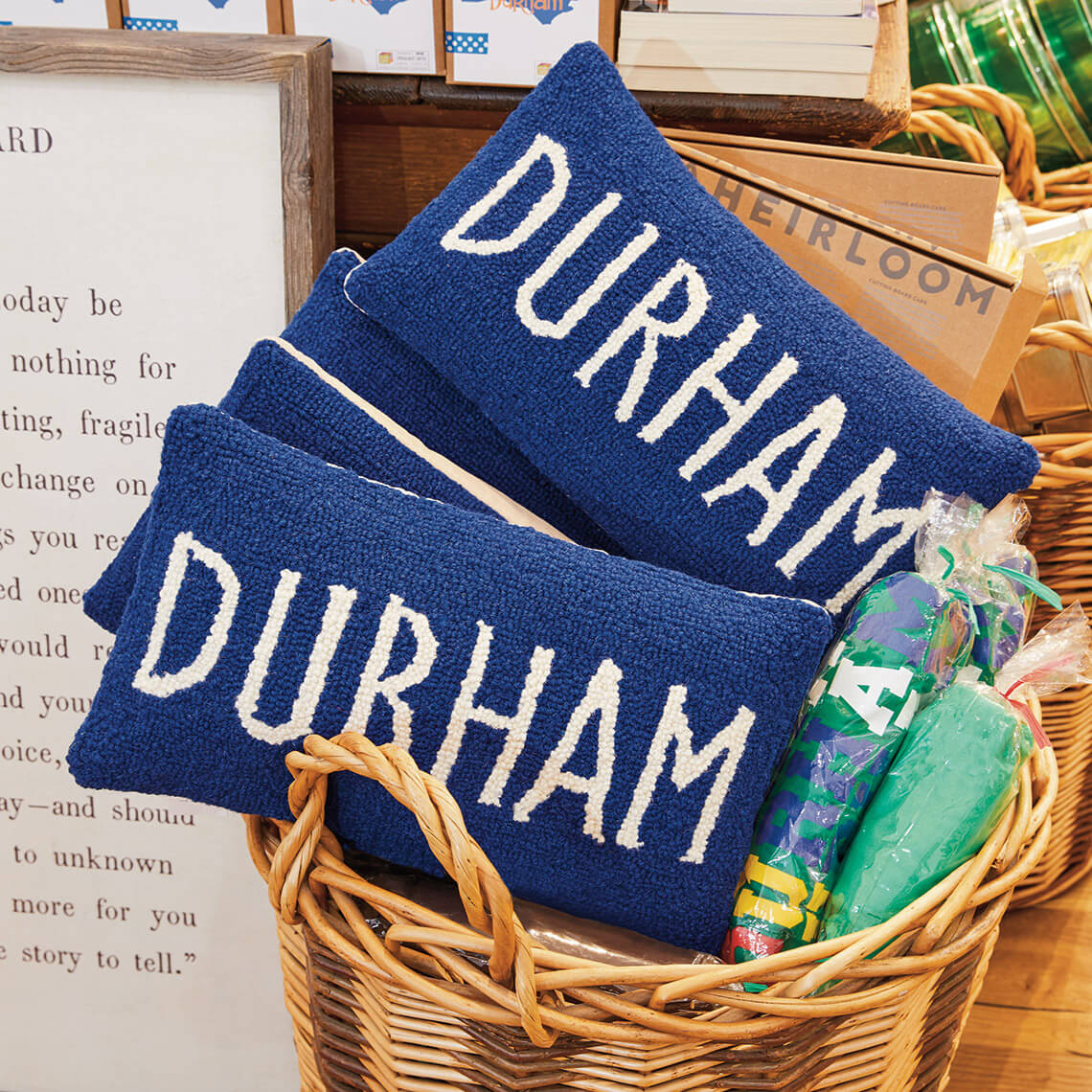 Shop for local gifts and decor at Parker and Otis. photograph by Eric Waters

Parker and Otis. Monica Edwards describes this gourmet food/wine/gift/coffee shop and breakfast spot as “uniquely Durham.” Even if you’re only stopping in for a caffeine fix and shrimp BLT (Monica’s go-to order), you’re bound to leave with cards, candles, books, or a bottle of wine. Monica calls the shop “a great place to find something for the person who has everything.” 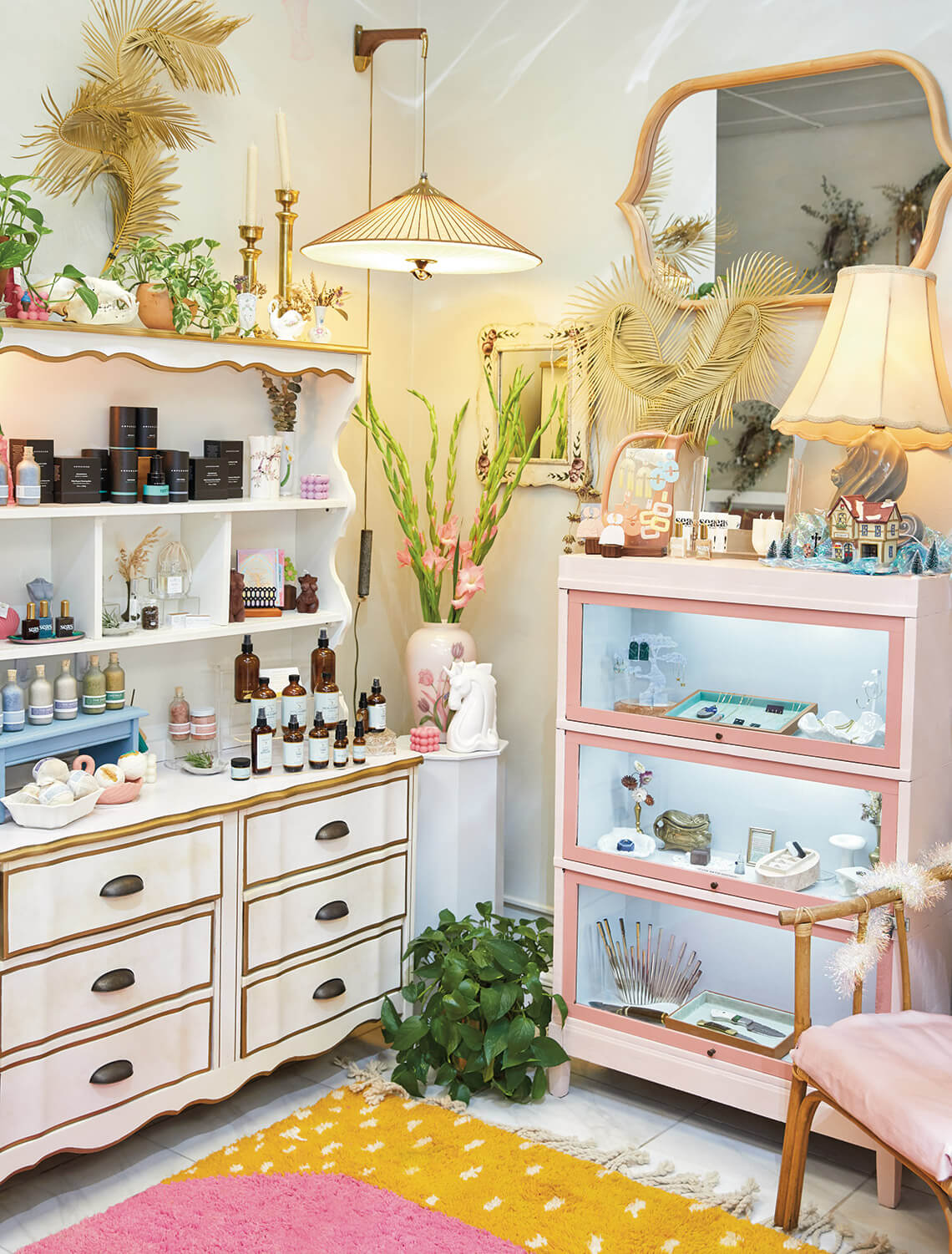 Pick up a beautiful bouquet at Blossom and Bone. photograph by Eric Waters 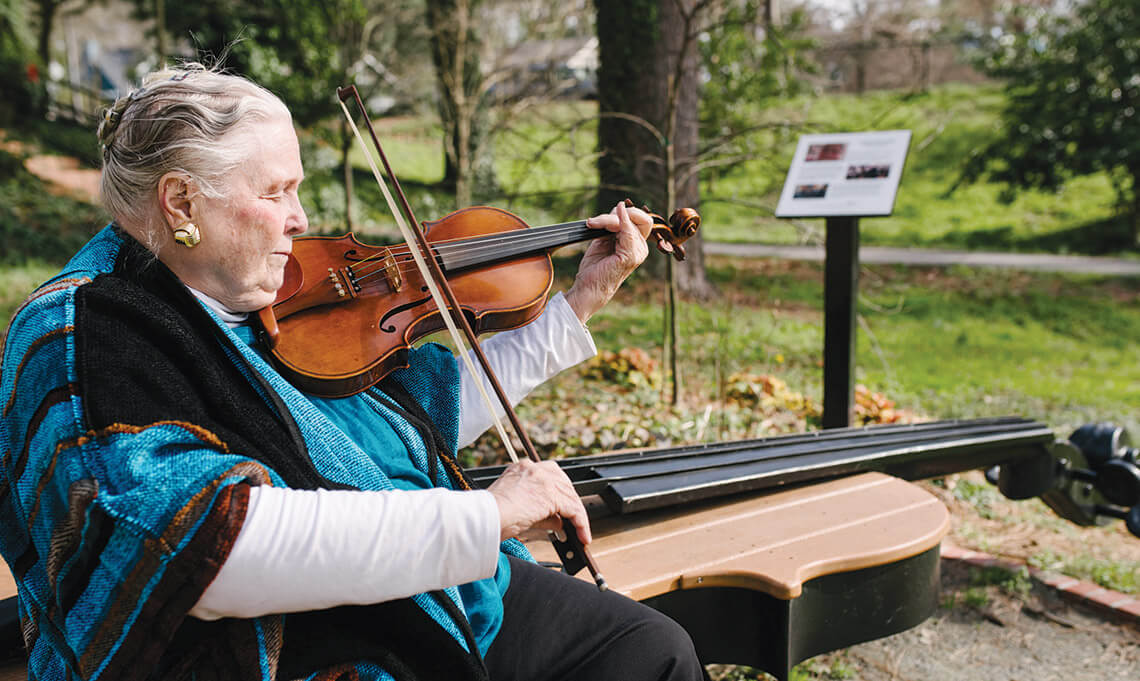 A Museum Without Walls

Stumbling upon one of 15 “history groves” in parks, on Main Street, and in other unexpected spots throughout Durham, passersby are surprised to learn about people who have contributed to the city’s unique story. As part of an ongoing collaboration between the Museum of Durham History and the community, each grove includes a bench, a dedication plaque, and native plants like crape myrtle, yaupon holly, oaks, and jonquils. At the grove honoring Dorothy Kitchen, founder and director of the Duke University String School, visitors can rest on a violin-shaped bench created by local metalworker Perry Whitted. The groves tell the stories of the local heroes who built this city. — Rebecca Woltz