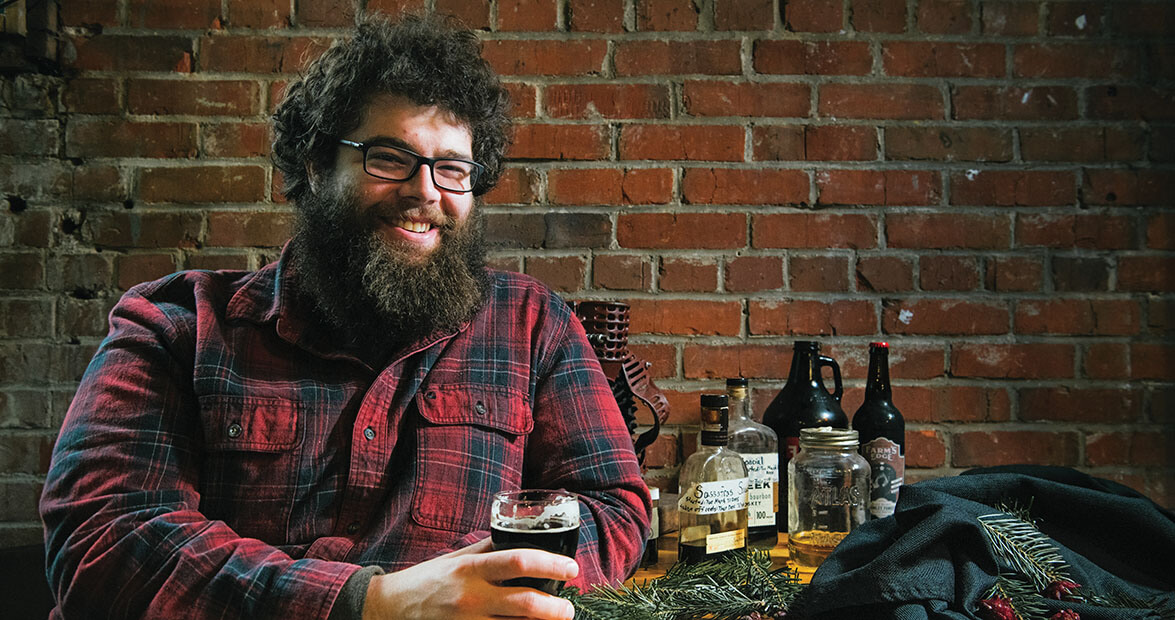 Between Durham and Hillsborough, there’s a nature preserve — Brumley Forest — where beavers drop black gum and elm trees onto the banks of secluded ponds, and red-clay hiking trails meander through stands of hardwood trees that are tall enough to feel ancient.

If you’d been there on a warm Saturday last October, you would have seen another ancient sight: a group of upright primates tromping through the wild, searching nature’s larder for edible delicacies.

Brian Mandeville stood at the head of the group, taller than the rest. The head brewer of Fullsteam Brewery, which buttresses Durham’s thriving Warehouse District, Mandeville has led the way over the past few years on a decidedly tricky task: making truly local beer, using raw ingredients foraged from our state’s backwoods, forests, and fields.

On this particular day, Mandeville was hunting for the pitted fruit of black walnut and hickory trees, which can be found up and down the East Coast from late August through November. If he could find enough, he would combine them with foraged sassafras to create an annual Fullsteam staple: the rich, dark Brumley Forest Baltic Porter.

As Mandeville searched the distant trees for the furrowed bark of the black walnut, more than a dozen community volunteers from the Triangle Land Conservancy, which owns and manages the preserve, fanned out behind him to scan the ground for tennis-ball-size walnuts and golf-ball-size hickory nuts. You could find the former by rolling your foot gently through the leafy layer of the forest floor, and the latter by poking your head where you ordinarily wouldn’t — under thickets and brambles and the matted grasses that grow wherever light shines through the canopy.

Mandeville and his team wandered happily, giving a shout whenever a cache of nuts turned up. The group carried five-gallon buckets and tough, plastic-lined malt sacks, which filled slowly but steadily as the day drew on and shadows formed among the trees. 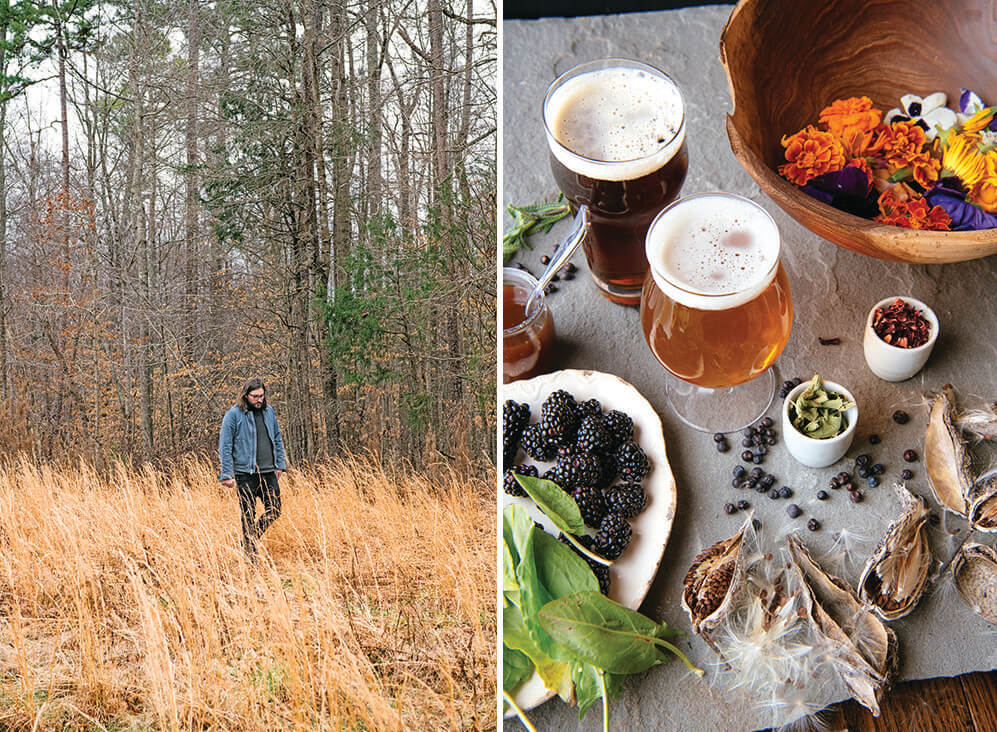 To create beers that are unique to North Carolina, more brewers are heading out into nature in search of hyper-local ingredients. photograph by Andrew Kornylak

Mandeville used to make such trips alone, but his outings became communal last year when brewers across the Piedmont, inspired by the national farm-to-table movement, joined together to make collaborative, foraged beers. In concert with the Triangle Land Conservancy, which manages seven preserves in the region, and the Piedmont Picnic Project, an educational group that leads foraging tours, brewers from Durham, Carrboro, Pittsboro, and Hillsborough set off this past autumn on a series of community expeditions. Heading out into the region’s wilder locales, they hoped to discover culinary treasures and, with luck, brew them into something delicious.

Eric Knight, a cofounder of Carrboro’s Steel String Brewery, hatched the idea for the collaboration, which he called Beers From Here, after participating in foraging walks out west. His goal was to better connect beer makers and drinkers in the Triangle with the land around them. By any account, he succeeded. In the project’s first year, four breweries and  two taprooms from Raleigh to Pittsboro participated, and more than 125 community members joined the foraging walks. “My hope is that this is just the start,” Knight says. He now envisions a future where brewers across North Carolina lead the country in the use of native ingredients and, in the process, “become ambassadors for conservation.”

“I came to Fullsteam because I wanted a place that wasn’t afraid to try new things,” Mandeville says one afternoon in the brewery’s long, brick-walled taproom, which overlooks his brewing space. Behind him, members of the Fullsteam production staff scurry around tall, stainless-steel brewing tanks. His assistants, dressed in rubber boots and jeans, appear and disappear between the tanks, uncoiling hoses and carting sacks of grain.

For Mandeville, “new” actually means old. In tinkering with native and foraged ingredients, he is returning to the origins of beer craft. In the past, brewers exclusively used local herbs and spices to flavor their wort — the sugary grain-tea that ferments, via yeast, into beer. In particular, brewers required bitter and floral flavors to balance out the sweetness of their wort. Now, hops accomplish this task for most beers. “But that’s a pretty recent and Euro-centric flavor,” Mandeville says. A few hundred years ago, he says, if you ordered a pint outside of Bavaria or the Netherlands, it likely would have been flavored with juniper, heather, or bog myrtle, also known as sweet gale. Not hops.

Today at Fullsteam you can enjoy beer flavored with pawpaw, sumac, wild ginger, or autumn olive. Thanks to Beers From Here, you also can find hyper-local, uniquely North Carolinian beers throughout the rest of the central part of the state, too. Brewers at Steel String appreciate the flavor of maypop, a native vine whose orange fruits taste “somewhere between lime and passion fruit,” according to head brewer Will Isley. Erik Lars Myers, head brewer at Mystery Brewing in Hillsborough, has grown fond of native calico asters, which lend Mystery’s beers what he calls “a nice floral-apple aroma.”

Using plants taken straight from nature requires the kind of labor you won’t see in most modern breweries. To harvest enough calico aster to make a good beer, Myers says, he had to hand-pluck dried flowers off of hundreds of branches foraged from Brumley Forest. To clear the black walnuts from their hulls and prepare them for cracking, Mandeville uses an antique-looking cast-iron black walnut huller, powered the old-fashioned way: by hand.

Why go through the hassle of using native ingredients? “To us, foraged ingredients create a platform for making beers that really evoke this region,” Mandeville says. “We think it can help differentiate our product from the competition’s, but we also think it’s just good for people to be able to try new things and have new experiences,” he says. “It takes a little more work to make beer this way, but we think it’s worth it.”

For Knight, who plans to expand Beers From Here in the coming years, the goal is to support preserved land and local farmers. “We hope to open up new markets for farmed native plants,” he says. Mandeville shares a similar sentiment. “My hope is that we can get people to be more curious and more excited about the woods and fields around them,” he says, “and maybe to get outside just a little more.”