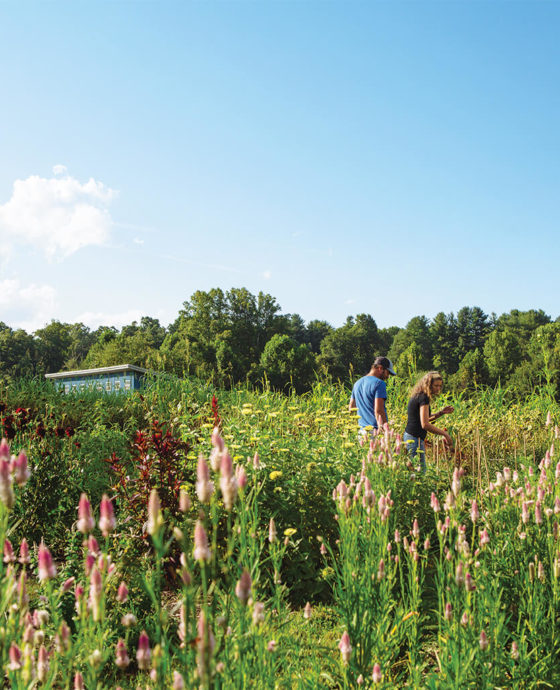 As you enjoy a pint of the Mildly Bitter Blonde ale on the patio at Sideways Farm & Brewery, you can look out to a nearby field and see the beer’s namesake, a grumpy white ewe named Charlotte. Tucked into a residential neighborhood in Etowah, just half an hour south of Asheville, the seven-acre Sideways property is home to four sheep, 40 chickens, 11 ducks, two baby goats, and a family that’s deeply committed to bringing brewing back to its agricultural roots.

“When you walk out of a winery, you’re surrounded by vineyards,” says Jon Schneider, brewer and co-owner with his wife, Carrieann. “You see the connection between the wine you’re drinking and the grapes they’re growing. We want to create that same connection in people’s minds, but at a brewery.”

To that end, the beers at Sideways showcase ingredients harvested from the Schneiders’ property or sourced from other farms in the area: For one creative brew, Jon used sage from the garden to smoke the wheat, giving the beer an earthy, herbal flavor. Carrieann’s personal favorite among the 70-some beers they’ve released so far was infused with lemon balm and chamomile that she grew. And the brewery’s best seller, a Belgian blackberry ale, is fermented with 150 pounds of local fruit. 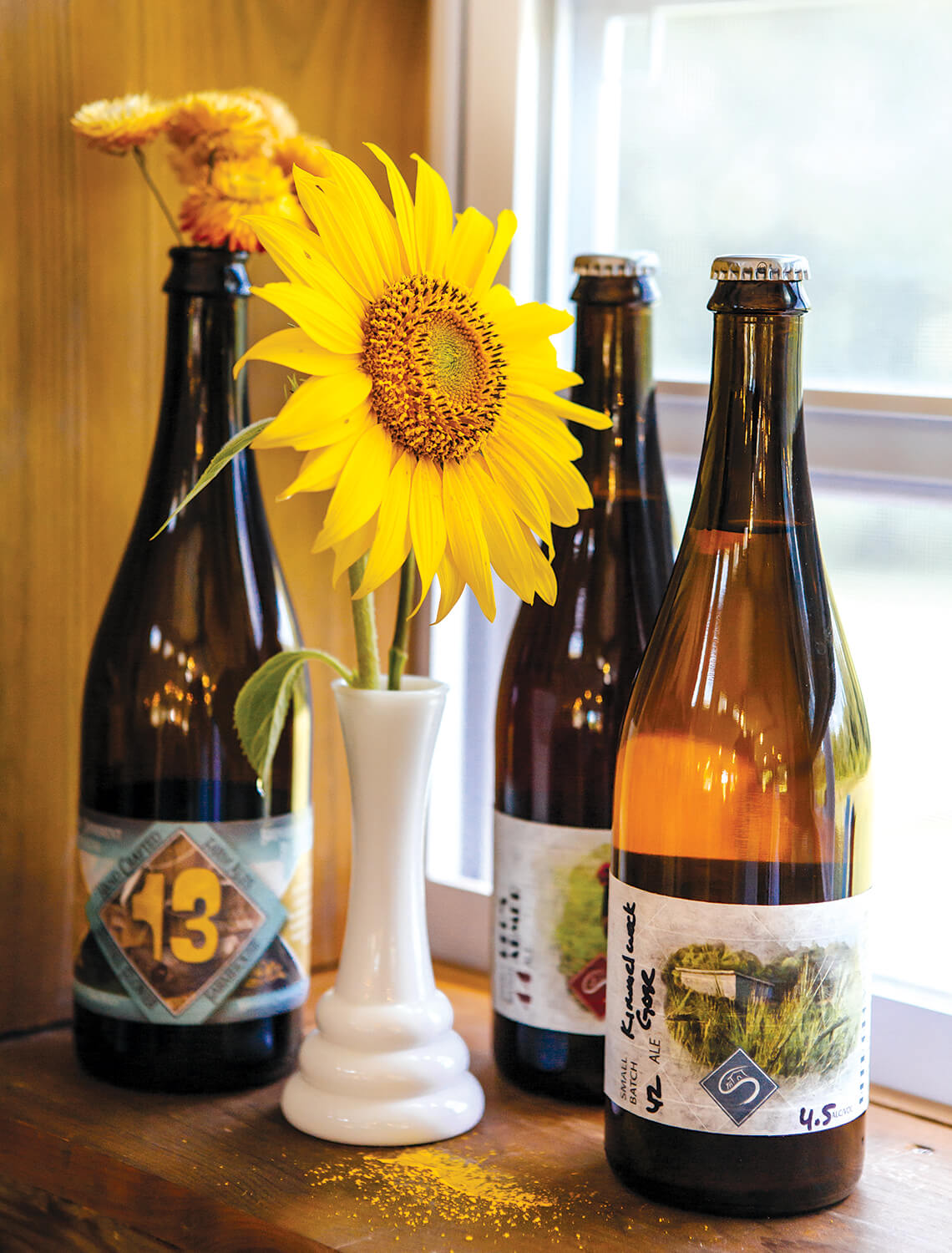 The Champagne-style bottles that carry Sideways beer (or flowers) make popping the top in the taproom feel like a special occasion. photograph by Tim Robison

And while hops haven’t historically thrived in this region, the Schneiders are proud to be partnering with NC State University to test new hybrids for growing local hops, too. In the coming years, they also hope to raise their own barley and harvest wild yeast so they can produce beers that are made with 100 percent North Carolina ingredients. “We love to experiment,” Carrieann says, “and we love to learn.”

Nothing in the Schneiders’ early careers — Jon was a software engineer; Carrieann is a former teacher — prepared them for the life they’ve chosen. When Carrieann bought Jon a home-brew kit 11 years ago, though, he fell in love with the craft of beer-making. Four years after leaving their home in Orlando, Florida, they opened the brewery in the summer of 2018.

Since then, Sideways has evolved into a true family business: Carrieann’s mother, known as “Grandma” to the brewery’s customers, handles the cash, and their teenage kids help with everything from chicken management to beer-bottling. Their regulars have become part of the family, too, sharing sliders and s’mores around the Sideways firepit and coming back for frequent new beer releases. Jon brews in batches of about 100 gallons, which translates into 350 to 450 Champagne-style bottles. He prides himself on almost never making the same beer twice. “I always think back to 200 years ago, when people were making their own beer on their own farms and brewing with whatever they could find,” Jon says.

The Schneiders also seek out community collaborations, including a tart strawberry beer developed with Asheville kombucha maker Buchi, and a cranberry-and-lemongrass-infused brew created with the musician Citizen Cope, whose song “Sideways” inspired the brewery’s name. The lyrics, displayed on the tasting room wall, read: These feelings won’t go away … They’ve been knocking me sideways. 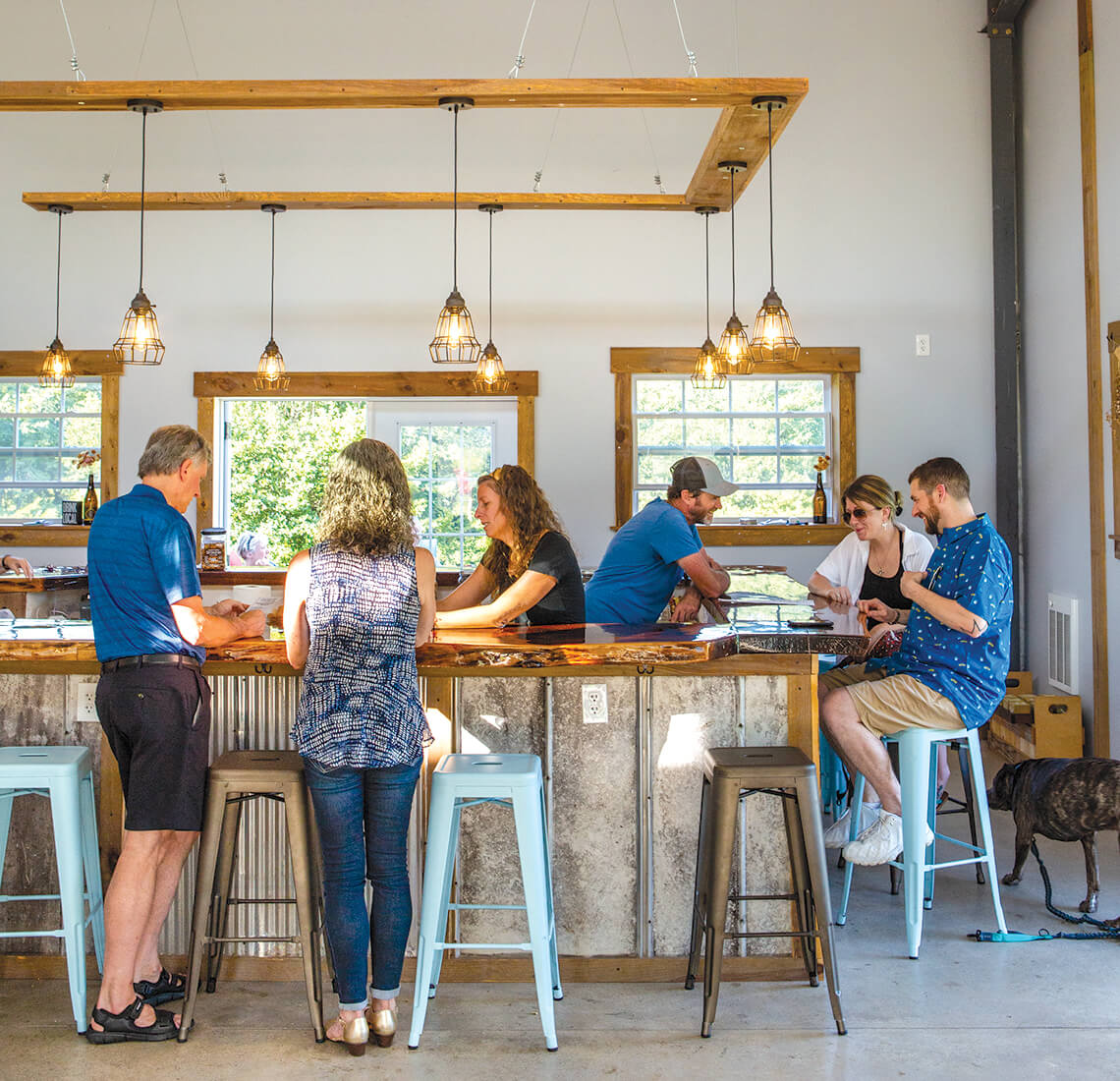 The taproom at Sideways Farm & Brewery. photograph by Tim Robison

“When Carrieann bought me that brew kit, we were living on a cul-de-sac in Orlando, and now we’re on a farm in Etowah,” Jon says, smiling. “I guess you could say that we were knocked pretty far sideways.”