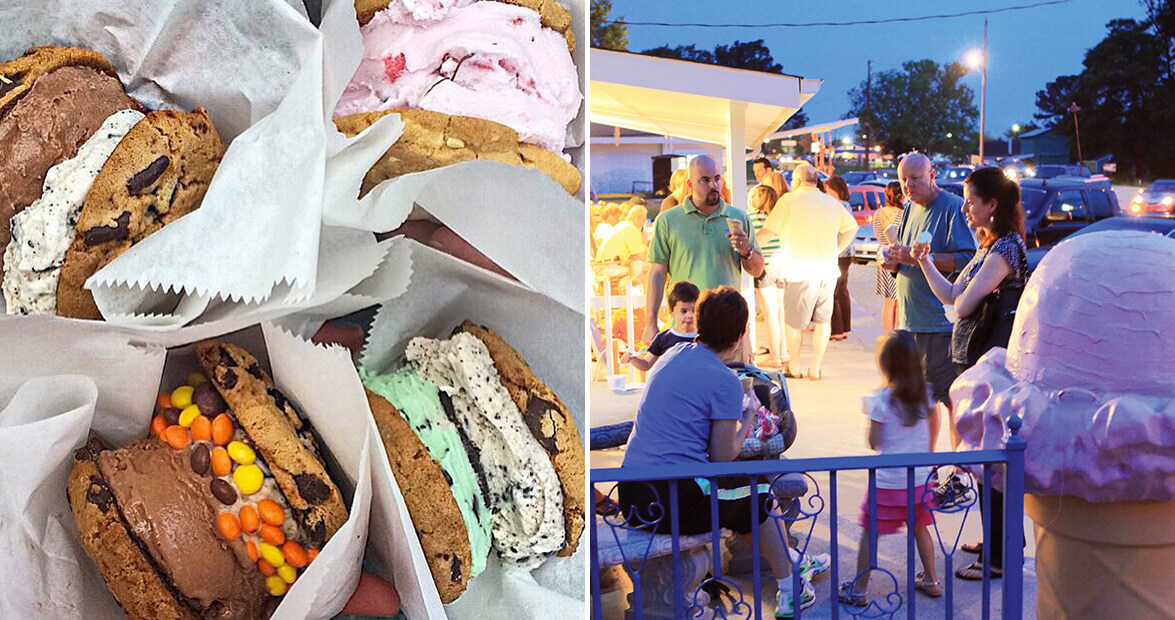 When eating one of the Ice Queen’s Instagram-famous ice cream sammiches, you’ll need a strategy. Trust us — these treats are behemoths. Each sammich features two heaping scoops of ice cream that are bookended with soft-baked chocolate chunk cookies. The Greensboro-based food truck is the brainchild of owner Christine Catania, and her themed sammiches often feature some other decadent topping like Nutella or Reese’s Pieces. (Try a classic stand-by, the Kermint, which features mint and cookies ’n’ cream ice cream and sneaks an Oreo in between the scoops.) So how exactly do you eat one? For starters, don’t remove the wrapper. Also, alternate biting each cookie at an angle. Just remember: no spoons. “We call spoons ‘cheater sticks,’” says Catania with a laugh.

Sunni Sky’s is known for its wacky ice cream flavors like Sweet Potato and Popcorn, so the fact that owner Scott Wilson created a jalapeño flavor shouldn’t come as too much of a surprise. The problem was that the ice cream wasn’t spicy enough for heat-seeking masochists. “I had customers bringing me bottles of hot sauces,” Wilson says. His answer to their conundrum was the Cold Sweat, a flavor that boasts three types of peppers and two types of hot sauces — and requires a signed waiver. Cold Sweat has its own legion of fans, some of whom who devour it unfazed as if it were butter pecan. For the risk-averse, ask for the tiniest of samples and opt for a scoop of the mild-mannered but also novel Crumb Cake or Key Lime Pie flavors.

As a lover and preparer of Italian cuisine, Chef Teddy Diggs of the elevated Il Palio restaurant likes to approach all of his dishes — even dessert — with balance in mind. His sweet corn gelato is the perfect merriment of sweet and savory, and the summertime treat is so good, it has people coming in just for dessert. Fresh, puréed corn kernels and milk that’s steeped with corncobs are sweet and creamy enough that the recipe only calls for a touch of sugar and cream. “I wanted to highlight the natural sweetness of the North Carolina sweet corn,” Diggs says. Mission accomplished.

Always marching to the beat of its own drum, Asheville and its spirit are best captured in the zany, fun flavors made at Ultimate Ice Cream, like Goat Cheese and Bing Cherry or Ginger. For something truly decadent, try the Brown Sugar Maple and Bacon flavor, which boasts large pieces of salty bacon sourced locally from Hickory Nut Gap Farms. Many of the ingredients Ultimate Ice Cream uses are grown and crafted locally, which completely justifies that extra scoop on your cone. It’s for posterity.

A trip to the Outer Banks wouldn’t be complete without a visit to Duck Donuts, where every doughnut is made to order in front of you and still warm when you eat it. At the Corolla or Kitty Hawk locations, add to the experience by ordering a Donut Sundae, complete with glaze, ice cream, whipped cream, and toppings like Oreo crumbs or coconut. Regional manager Lynn Kirisits came up with the idea for the dessert as a way of making doughnut-eating an all-day affair. As it should be — calories don’t count when you’re at the beach.

Grape is the most intriguing flavor on the menu at the beloved Tony’s Ice Cream Company, and has long been a nod to the Italian heritage that this family business was built upon. Make no mistake, the grape ice cream isn’t anything like sherbet — while unusual, it’s just as creamy as you’d expect any other flavor to be. Owner Lewis Coletta won’t tell you how it’s made — no way, no how — but we’ll let you in on a little secret: Try it in the form of a shake. Tony’s, which opened in 1947, makes its milkshakes extra special by topping them with an additional scoop of ice cream.

The faint whiff of honeysuckle on a summer evening is both fleeting and intoxicating, much like Chef Bill Smith’s famed sorbet that uses the plant’s blossoms for flavoring. You can only get the dessert featuring spring’s delicate trumpet for a limited time, usually in May. Smith personally picks the flowers along a bike path near his house. Once in a while, the occasional passerby-turned-expert-botanist has chastised him for not pulling the invasive species up by the root. “Like I have time to pull them up — there’s acres of the stuff,” Smith said in a 2014 interview. Now tell us: How can something that tastes and smells so good be a bad thing?

As its name implies, the Bar-B-Q Center’s specializes in barbecue. But for some time, ice cream was the only thing on the menu. The restaurant started offering pork shoulder one winter to make up for a dip in ice cream sales. People mostly come for the pig now, but clear the table for what could be considered the pièce de résistance of the meal: a massive banana split. It weighs in at 3.5 pounds and is big enough to feed at least three people, though there have been some who’ve polished it off all by themselves.

Before The Parlour had a brick-and-mortar location, an inebriated gentleman stumbled upon the ice cream truck at a festival, asking for ketchup. “Obviously it was pretty funny, but it also got me thinking about sweet and salty combinations that would actually be good — ketchup and ice cream not being one,” says Vanessa Mazuz, who owns The Parlour alongside her husband, Yoni. Shortly after, The Parlour’s Drunken Sailor Sundae was born. It features salted butter caramel ice cream, chocolate covered pretzels, potato chips, and dark chocolate syrup. A delightfully sinful combination of sweet and salty? We’re on board.

This summer’s trendiest frozen treat comes with sparkling wine and skyline views of the Queen City. City Lights Rooftop Bar serves something called Sparkle & Pop (try not to smile when ordering it), which is a popsicle served in a glass of wine. These aren’t your grocery-aisle variety of popsicles, either. King of Pops, a local shop, makes a rotating lineup of popsicles for the drink, which includes fun flavors like blackberry ginger lemonade. Sip and slurp while watching the sunset.