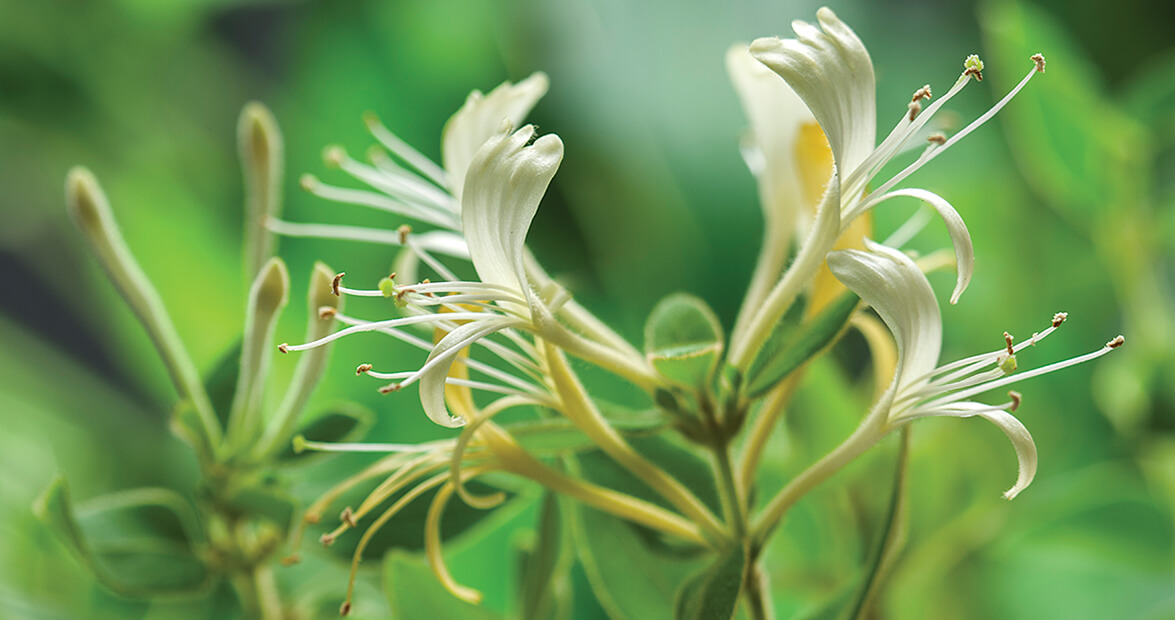 Do children still try to toughen their feet every spring, and then, inevitably, stub their big toes, and get stung on their soles when they step on a bee buried in clover? Do children still pluck honeysuckle blossoms, the delicate, butter-yellow trumpets of May and June? Do they pinch the flowers’ storybook-illustration ends, like a fairy’s pointed green cap, and then carefully draw out that single thread of stamen — just one — where the droplet of nectar dangles, and touch that bit of sweetness to their tongues?

Except, of course, that perfectly clear, glistening droplet never amounted to a droplet, but something much smaller than a raindrop, or a teardrop. Smaller, in fact, than anything with drop attached to it. A bead, instead. The kind of tiny bead of water you find within the whorled petals of a rose.

I ask this question because, these days, you’ve got to look for honeysuckle. In Rutherfordton, it grew where the edges of our yard bled into a field of broomstraw, and along the Tryon Road blacktop where I rode my bike, and on the fence around the school playground, so I had access to honeysuckle anywhere I happened to be. These days, the vine is considered a nuisance, a weed worthy only of eradication, a symbol of neglect. It garners the same horrified expression as the one my neighbor fixed on me the spring I mentioned that I was thinking of planting morning glories near the fence we share.

Elsewhere, somewhere, honeysuckle twines over stumps and shrubs and fences. Honeysuckle doesn’t intend to be invasive. Its shoots are thin and supple, its blooms extravagant. I’m certain that kudzu has an actual, high-chlorophyll intelligence, and absolutely aims to dominate the landscape. Ivy: lower IQ, but the same — though more slowly achieved — goal. Blackberries: Who needs an IQ when you have briars? Honeysuckle, though, simply wants a place to perch, to tangle prettily for a portion of spring. Honeysuckle doesn’t claim, or cover, or clamber. It tumbles and cascades and softens, and smells heavenly while doing so.

Yes, Japanese honeysuckle is an invasive species. But we love it so much that we think of it as an honorable North Carolina native.

And, well, except that the precious bead of sugar water didn’t “dangle,” either. It never fell. Sometimes it wasn’t there — like a firework, you’d get the occasional dud, and wonder, Was a bee too busy stinging the sole of my tender, newly bare foot to get to this flower? But if it was there, at the end of that hair-thin filament, it never dropped. There isn’t enough weight, enough substance to that sweetness, to cause it to fall. I know this because I spent more than one afternoon trying to collect honeysuckle nectar in a jar. Over and over, pinch after pinch, denying myself that tongue-tip of sugar in the futile endeavor of accumulating enough for a genuine swallow. At the time, the enterprise seemed more likely to succeed than that other backyard activity: looking for four-leaf clovers. Never mind more rewarding, with immediate, tasty gratification rather than unproved superstition.

Eventually, I’d give up and drop the spent bloomlets in the bottom of the jar, making a nest for the lightning bugs that would inhabit it come twilight. By morning, the honeysuckle had become a limp, slimed mess of sadness, and a lesson was learned: Honeysuckle is meant for immediacy, not for collecting or keeping. Gather ye rosebuds while ye may, and so forth.

Still, when I do pass a honeysuckle thicket, or catch a waft of that unforgettable aroma, I’m cast back to that age, and that jar, and that time. To that brief, shining, Camelot moment on a May morning when some nondescript green backdrop burst into bloom and oh! there it was — honeysuckle — waiting patiently all along.