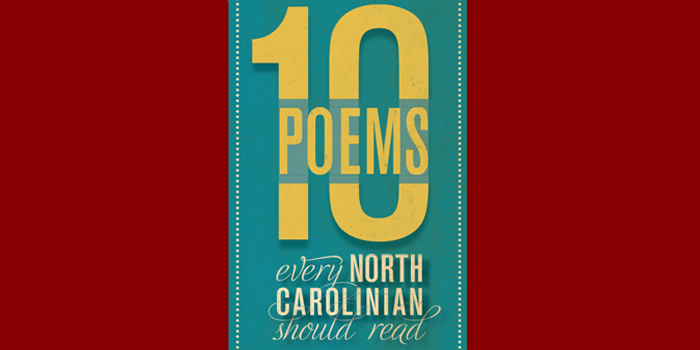 Choosing a list of extraordinary poems that captures North Carolina’s beauty, hospitality, and traditions is easy. Winnowing that list to 10, however, is not. The challenge is deciding among a lengthy roster of poets from the mountains to the coast — and an even longer slate of poems about our state. Our results came from exhaustive research, debate, and compromise. Here, we present a trove of poems worthy of must-read status that are even better when read out loud.

>> Click here to read an introduction by Billy Collins.

I went back
to my old home
and the furrow
of each year
plowed like
surf across
the place had
not washed
memory away.

What summons do I hear?
The morning peal, departure’s knell;
My eyes let fall a friendly tear,
And bid this place farewell.

Attending servants come,
The carriage wheels like thunders roar,
To bear the pensive seniors home,
Here to be seen no more.

Pass one more transient night,
The morning sweeps the College clean;
The graduate takes his last long flight,
No more in College seen.

The bee, in which courts the flower,
Must with some pain itself employ,
And then fly, at the day’s last hour,
Home to its hive with joy.

Sometimes I wish I were still out
on the back porch, drinking jet fuel
with the boys, getting louder and louder
as the empty cans drop out of our paws
like booster rockets falling back to Earth

and we soar up into the summer stars.
Summer. The big sky river rushes overhead,
bearing asteroids and mist, blind fish
and old space suits with skeletons inside.
On Earth, men celebrate their hairiness,

and it is good, a way of letting life
out of the box, uncapping the bottle
to let the effervescence gush
through the narrow, usually constricted neck.

And now the crickets plug in their appliances
in unison, and then the fireflies flash
dots and dashes in the grass, like punctuation
for the labyrinthine, untrue tales of sex
someone is telling in the dark, though

no one really hears. We gaze into the night
as if remembering the bright unbroken planet
we once came from,
to which we will never
be permitted to return.
We are amazed how hurt we are.
We would give anything for what we have.

Up in Jackson County they have
this soapstone in a field, scored all over
with hieroglyphics no one has solved.
Or maybe it’s more picture writing,
the figures so rough and worn
they no longer represent. But
the markings are at least distinct
enough to tell they’re made with hands
and not just thaw and wind and water.
Among the written characters of all creation
that big rock seems significant, but
like the written characters of all
creation is unintelligible without
a key to its whorls and wisps
of scripture that seem to shiver
in the rain on its face
like fresh-ink chromosomes
or voice-prints of quasars, there
in the washed-out cornfield. But what
could be more awesome than a message
ancient, untranslatable, true,
up where giants walked on the balds,
in text and context, history, word?

-Robert Morgan
At the Edge of the Orchard Country, 1987

On the Back Porch

The cat calls for her dinner.
On the porch I bend and pour
brown soy stars into her bowl,
stroke her dark fur.
It’s not quite night.
Pinpricks of light in the eastern sky.
Above my neighbor’s roof, a transparent
moon, a pink rag of cloud.
Inside my house are those who love me.
My daughter dusts biscuit dough.
And there’s a man who will lift my hair
in his hands, brush it
until it throws sparks.
Everything is just as I’ve left it.
Dinner simmers on the stove.
Glass bowls wait to be filled
with gold broth. Sprigs of parsley
on the cutting board.
I want to smell this rich soup, the air
around me going dark, as stars press
their simple shapes into the sky.
I want to stay on the back porch
while the world tilts
toward sleep, until what I love
misses me, and calls me in.

The Men Who Raised the Dead

If they had hair it was gray,
the backs of their hands wormy
currents of blue veins, old men
the undertaker believed
had already lost too much
to the earth to be bothered
by what they found, didn’t find,
brought there that May afternoon
dogwood trees bloomed like white wreaths
across Jocassee’s valley.

They took their time, sought the shade
when they tired, let cigarettes
and silence fill the minutes
until the undertaker
nodded at his watch, and they
worked again, the only sound
the rasp and shuck of shovels
as they settled deeper in graves
twice-dug, sounding for the thud
of struck wood not always found—
sometimes something other, silk
scarf or tie, buckle, button
nestled in some darker earth,
enough to give a name to.

One quit before they were done,
lay down as if death were now
too close to resist, and so
another stepped in his grave,
finished up, but not before
they shut his eyes, laid him with
all the others to be saved
if not from death, from water.

When I come back from having babies.
they put me on sewing.
I could no more sew a straight line
than I could milk a chicken
but the other ladies helped me,
showed me how to set the needle
in the cloth to make a turn,
pull my thread to the side
so it wouldn’t jam up in the bobbin.
I won’t say I ever was much good at it,
but nobody’d accuse me a not trying.

A lifetime, it seems. Husband,
three kids growed. Mama passed.
Went from T-shirts and boxers to
sweat shirts then collars then elastic.
One day, outta the blue, they unbolted
the machines, loaded them in trucks,
hauled ’em down to Mexico or someplace.
Nothing left on second floor
but concrete and empty bolt holes.
We was like family, us sewers.
You’d a thought we lost a brother or sister,
the weight we felt, grief tangling up among us.

You’d find broke needles in corners
for a while after, lengths a thread.
Ladies getting old by then just retired.
Young ones, they got on
somewhere else in the mill, some
other machine. Didn’t lose nobody from it,
not really. Took our spirit, that’s all.
You can work a 8-hour shift without spirit,
but it ain’t half worth it, you know?

I have sought the elusive aroma
Around outlying cornfields, turned corners
Near the site of a Civil War surrender.
The transformation may take place
At a pit no wider than a grave,
Behind a single family’s barn.
These weathered ministers
Preside with the simplest of elements:
Vinegar and pepper, split pig and fire.
Underneath a glistening mountain in air,
Something is converted to a savor: the pig.
Flesh purified by far atmosphere.
Like the slick-sided sensation from last summer,
A fish pulled quick from a creek
By a boy. Like breasts in a motel
With whiskey and twilight
Become a blue smoke in memory.
This smolder draws the soul of our longing.

I want to see all the old home folks,
Ones who may not last another year.
We will rock on porches like chapels
And not say anything, their faces
Impenetrable as different barks of trees.
After the brother who drank has been buried,
The graveplot stunned by sun
In the woods,
We men still living pass the bottle.
We barbecue pigs.
The tin-roofed sheds with embers
Are smoking their blue sacrifice
Across Carolina.

January absolves the village.
Summer left no flags. I’m living
just now alone in a room on stilts:
Whatever silts this way
is what I’ve got.

It’s clean. Even the fake flowers
somebody left outside are stripped
of pretensions. They bloom
nocolor, original plastic.

Perhaps I am here to practice.

Every night I sleep like the drowned,
And dream these houses break and sail
on perfect silence into the world’s
dreams of vacant houses.
Every morning’s drydock light
establishes them again on their bad knees.

Miles under a blue sun,
sand in my shoes, a heavy parka on:
these are the times the child whispered
I’m the only one.
Swimmers went out once, so many,
and never reached back.
I’m learning the stroke, stroke,
afloat and purposeful along the paths
following a wind full of gulls and grackles.

This is my sandfinger, my blue light with birds.
We talk a cold tongue, and the tide’s
good to us all: here’s that plain
stretch I never believed, all bone
and shell, lost gull feathers,
old, washed empty claws:
this perfect weather.

Up here in the mountains
we know what extinct means. We’ve seen
how our breath on a bitter night
fades like a ghost from the window glass.
We know the wolf’s gone.
The panther. We’ve heard the old stories
run down, stutter out
into silence. Who knows where we’re heading?
All roads seem to lead
to Millennium, dark roads with drop-offs
we can’t plumb. It’s time to be brought up short
now with the tale-tellers’ Listen: There once lived
a woman named Delphia
who walked through these hills teaching children
to read. She was known as a quilter
whose hand never wearied, a mother
who raised up two daughters to pass on
her words like a strong chain of stitches.
Imagine her sitting among us,
her quick thimble moving along these lines
as if to hear every word striking true
as the stab of her needle through calico.
While prophets discourse about endings,
don’t you think she’d tell us the world as we know it
keeps calling us back to beginnings?
This labor to make our words matter
is what any good quilter teaches.
A stitch in time, let’s say.
A blind stitch
that clings to the edges
of what’s left, the ripped
scraps and remnants, whatever
won’t stop taking shape even though the whole
crazy quilt’s falling to pieces.