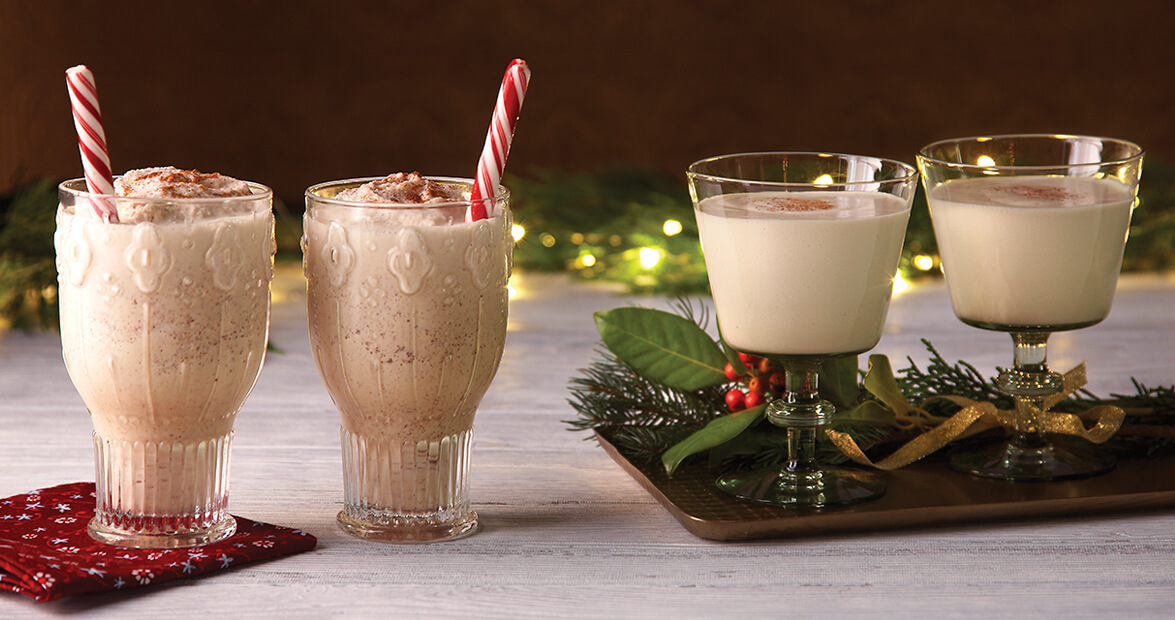 Pots of ink have been spilled over the woes and triumphs, the loneliness and the sense of rebellion, of Jewish people at Christmastime — so I’ll be brief: If there is one Christmas tradition I could culturally appropriate, it’s the eggnog.

My relationship with the classic Yuletide beverage began when I was about 9 and spied a mysterious red-and-green-lettered carton in the milk aisle at the Winn-Dixie. “That’s eggnog. Want to try it?” my mother asked. I suspect she, too, had wondered about it, but her kosher-keeping parents wouldn’t have allowed it. My curiosity offered her the perfect excuse. So we bought a box, went home, and poured out two short glasses.

Mom sipped hers, pursed her lips, and shook her head. “You can have mine,” she said. The concoction’s thick consistency disturbed her, but I was undeterred. That smell — which I now can identify as imitation nutmeg — wooed me. For me, the creaminess, velvety-smooth texture, and slight sweet-tang were a revelation.

And that was years before I learned about adding bourbon.

Another discovery came quickly: It turned out that some people actually made their own eggnog. In my then-favorite book, Betty Crocker’s Cookbook for Boys and Girls, originally published in 1957 and a relic of my mother’s childhood, I came upon one recipe. To my delight, I discovered that it involved using a handheld rotary beater and putting ice cubes into a plastic bag and smashing them with a meat mallet. The result was even better than the labor: a vanilla-laced, egg-enriched, milky drink so thick it was almost custard, studded with delicate icy shards that melted in my mouth.

Eggnog is a medieval English potable, part of a vaunted milk punch family of drinks. Arriving here with the earliest settlers, it took off in Colonial America, thanks to the proliferation of chicken and dairy farmers who produced the key ingredients. George Washington is said to have served it to guests at Mount Vernon.

Not only did Rutledge make hers with the requisite booze, she also describes when it’s meant to be drunk: in the morning. “Before breakfast, at Christmas time,” she writes, “everyone takes a glass of eggnog and a slice of cake.”

If this is what my neighbors are drinking when I see them sipping from mugs on their front porches on Christmas Day, no wonder they look so happy. Neal, whose own version calls for three different types of alcohol, in addition to both whole milk and cream, supported the customary morning tipple, claiming that it “guarantees peace and good cheer for the coming New Year.”

There are other ways of doing it, of course. Edna Lewis, who was one of the world’s top authorities on Southern food, left a lasting legacy on North Carolina’s cuisine during her tenure here as a guest chef at the Fearrington House in Pittsboro. She believed eggnog should be made at least a day or two in advance and should be served well-chilled. And shared, too, which she did by making sure to “deliver it to friends packed in old-fashioned Mason jars, along with a tin of Christmas cookies.”

These days I like to make eggnog with my kids, but they like it best when we add ice cream and give the mixture a whirl in the blender for eggnog shakes, into which they dip candy canes. We make them during the Christmas season and talk about how important it is to respect other people’s traditions. Then they go to bed and I whip up Bill Neal’s version with bourbon, rum, and brandy. And this year I’m recommending that we all take a nip before breakfast on Christmas morning.