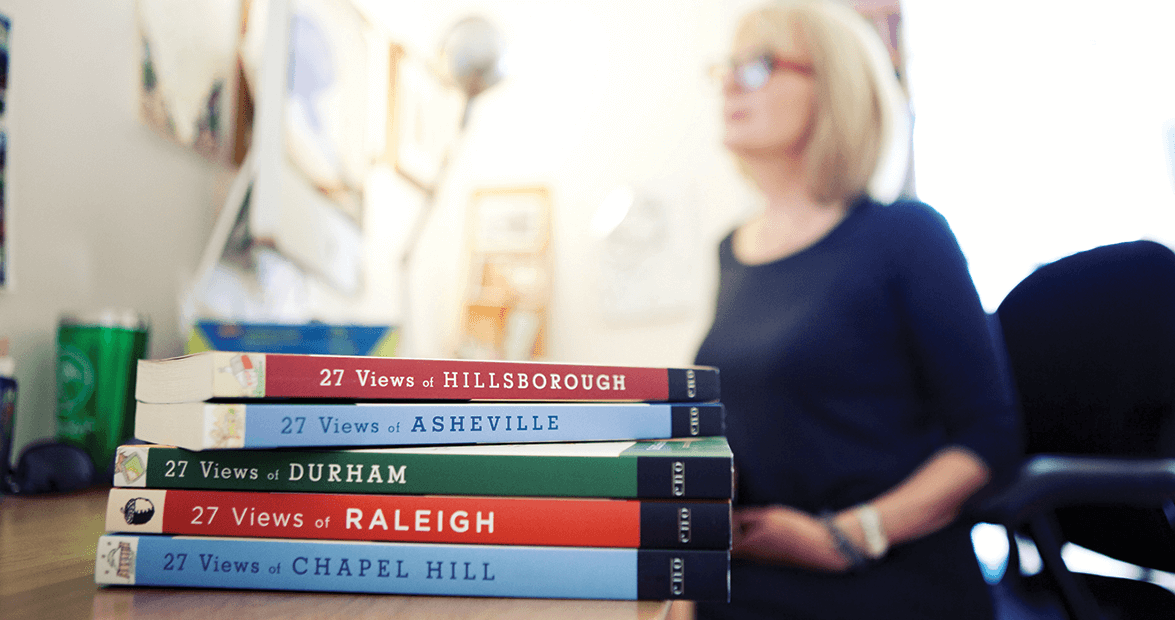 Twenty-seven is a beautiful number. It’s not too big and it’s not too small; a person who is 27 is neither all that young nor all that old. The ancient Greeks thought that a celebration attended by 27 people was the perfect size for a gathering — neither too grand nor uncomfortably intimate. And thus it would follow that a book with that many stories, poems, and essays in it, tucked between a colorful and amusing hand-drawn cover, would be the perfect number to attract a good quantity of readers, discerning readers, ones who are searching for a tome that is not too lofty and not too light.

But this is not why Elizabeth Woodman, mastermind publisher and creator of the ubiquitous and very successful 27 Views series, chose it. The number was derived as she considered publishing a book to celebrate the wonderful writers in the town where she lived, and she counted them up and figured that she knew about 27 of them. And thus, 27 Views of Hillsborough was born.

“Originally I’d been thinking of a collection of work from Hillsborough writers, because not everybody knows what a great battalion of writers live here,” Woodman says. “But then I remembered a remarkable essay that Allan Gurganus wrote about moving to Hillsborough from New York City, and the idea expanded from there. I thought it would be interesting to get these writers’ perspectives on the town where they lived.”

A list of the contributing writers to that inaugural publication sounds like an all-star team, or a grouping of literary superheroes — Randall Kenan, Michael Malone, Lee Smith, Jill McCorkle, Allan Gurganus — and it set the tone for the volumes to follow. Next came 27 Views of Chapel Hill, then Durham, Asheville, and Raleigh. 27 Views of Charlotte is in the works, and there may be more in the offing.

The power of place

What distinguishes these books from other collections is their focus on place. A sense of place is important to all writers, but Southern writers write about place as if it were a living thing, another character in the story. Where you’re from, they seem to say, is who you are. After all, another word for place is home, and the South doesn’t even bother with the distinction. We just put the two words together. Homeplace.

When 27 different writers share stories about their homeplace, we see that place completely: the sordid, the beautiful, the dark and the light. Each and every one of these towns is illuminated and distilled through intimate narration, stories told honestly, sometimes brutally so.

“It’s not a chamber of commerce kind of book,” Woodman says. By which she means there’s no puffery here. No subjects are off limits. Preconceived notions are dashed with a healthy dose of reality. Reading an entire edition is like becoming the best sort of tourist. I’ve lived in Chapel Hill for almost 30 years, and I’ve only been to Raleigh about 10 times; after reading Raleigh’s entry in the series I can now say I’ve been there close to 40.

Though each book shares the same premise, each has taken on a life of its own: Woodman doesn’t direct the views, she just waits and sees what might come of them. Hillsborough, for instance, became about history; Asheville is haunted by the ghost of Thomas Wolfe; Raleigh surprises by being more about the little neighborhoods that make up the city rather than the city itself; and Charlotte, so far, looks like it’s going to be a mystery — for some reason, Charlotte is filled with mystery writers.

The cumulative power of these collections goes far beyond the clever and somewhat loopy hand-drawn covers3; behind each is the tacit philosophy that the world can best be understood through story. It’s as if Woodman is publishing these books to start a bigger conversation: 27 views are not enough. What’s to keep the rest of us from coming up with our own?

This is why she’s taking the book into high school classrooms around North Carolina, sharing the insights of older, professional writers with the goal of giving the students permission to tell their own. Make your view the 28th, yours the 29th, ad infinitum. We all have a story; sometimes we just need to be reminded of that and encouraged to share it.

My view? I think this could be a never-ending series, finding a homeplace city to city all over the world, telling story after story; already Woodman’s been asked to bring her brand to other venues, other states. But Woodman and Eno Publishers are happy to stay right here in North Carolina. She doesn’t want to take this series farther; she wants to take it deeper. There’s a lot more to see here, and so many stories left to tell.

Elizabeth Woodman owns and operates Eno Publishers, which since 2009 has published two books every year. It may be a stretch to call Eno a small publishing company: It’s teeny. It’s a nonprofit. Woodman herself makes up 66 percent of the workforce. Another 33 percent is Gita Schonfeld, who takes care of the marketing and publicity; rotating interns make up the rest. Eno’s first book was a true story about a love affair between a Southern belle and a Yankee general, and the second was about gardening in the South. The third, 27 Views of Hillsborough, was published in 2010 and kicked off Eno’s signature series.

Find books from the 27 Views series at your local bookstore or purchase them online at enopublishers.org.