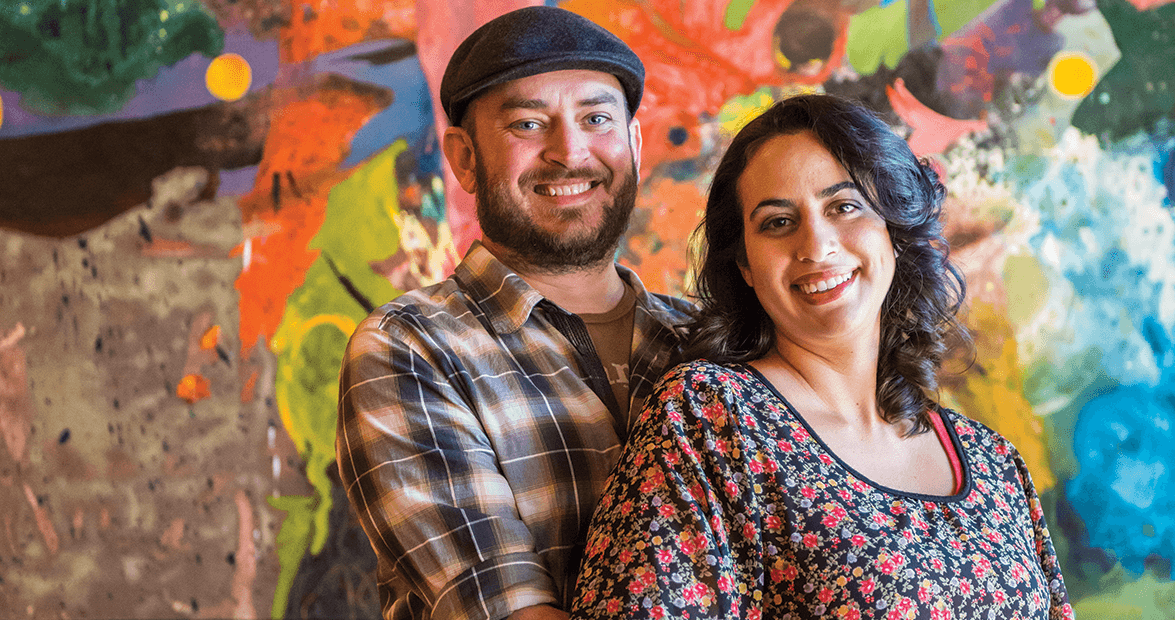 When Aimee Perez and Brian Miller were preparing to open Root & Vine in Morganton, they spent time wandering up and down Union Street downtown with a yellow legal pad, stopping strangers and asking questions.

Perez and Miller took the responses they received and developed a menu that combines French culinary tradition with comfort food.

So if today you eat at their restaurant, Root & Vine, you might choose between plates of seared duck, or pork chops served with a Cheerwine barbecue sauce, or a six-cheese macaroni and cheese.

“It [the menu] was basically about getting back to the root,” Perez says. “Taking great care with the food, but not oversaucing, overseasoning, or overcomplicating it.”

Miller, who is Root & Vine’s chef du cuisine, says the menu was also inspired by the meals he ate as a child. “We had Sunday lunches after church at my granny’s growing up,” he says, “and all the family would bring pots of this and that — green beans, corn, country ham, and fried-chicken biscuits.”

Perez and Miller opened Root & Vine in 2011, though their experience in food goes back farther than that. The couple met when they both worked at a café in nearby Hickory. Perez was the general manager. Miller was a line cook. When they realized that they lived on the same street, they started talking. At first, their conversations were about mundane things like the neighborhood, but then they talked about each other’s interests in food, and eventually, they started dating.

On one date, they took a trip from Hickory to go swimming in Linville Gorge. On their way home, they stopped in Morganton for sandwiches. They drove downtown to a restaurant at the corner of Union and King streets.

Miller remembers the lunch they shared on the restaurant’s patio. “There were only a few tables at the time,” he says, “and we thought there was just so much untapped potential. Great trees, and some good shade and brickwork. But it was barely being used.”

That restaurant closed about the time they decided to open Root & Vine. Perez and Miller moved fast to secure the location. They saw in the building the potential for the kind of place they dreamed of opening.

“We would stay up late at night fantasizing about what we would do if we opened our own restaurant, and we were always on the same page,” Perez remembers.

“I don’t think I would have had the courage to do it without her,” Miller says.

At the time, Miller was finishing his culinary training at Asheville-Buncombe Technical Community College. He was weeks away from earning his diploma when he dropped out to fulfill a dream.

Out with the old

Perez and Miller describe themselves as perfect partners, in the restaurant and in life.

“She runs the front of the house and is responsible for everything you see here,” Miller says, opening his arms wide.

But before the duo could open Root & Vine, they had to put some sweat equity into the building. It dates to 1901 and once housed a candy shop and a five-and-dime.

Together they ripped out army-green linoleum floors and smashed wall mirrors. They painted the walls burnt orange and hung up local artists’ paintings. They poured $60,000 into the basement to solidify the building’s ancient foundation.

“Yeah,” Perez says, “everyone told us we were crazy.”

Now, though, everyone is raving. Regulars make sure newcomers know that the iceberg wedge salad is a must. The lettuce is grilled and topped not only with the necessary blue cheese, but also with decadent chunks of smoked pork belly. Like all the dishes on the menu, the salad feels elevated and elegant. It’s a dish you expect from a fine-dining restaurant.

Yet, Miller bristles when people use the term “fine dining” to describe Root & Vine in Morganton. He admits, though, that his style of food is unique in town, especially dishes like the salmon or North Carolina mountain trout, which are both cooked on the restaurant’s wood-burning grill.

“When we first opened, this was the only place around where you could get fish that wasn’t fried,” Miller says. “There’s nothing wrong with that, but we have a different style.”