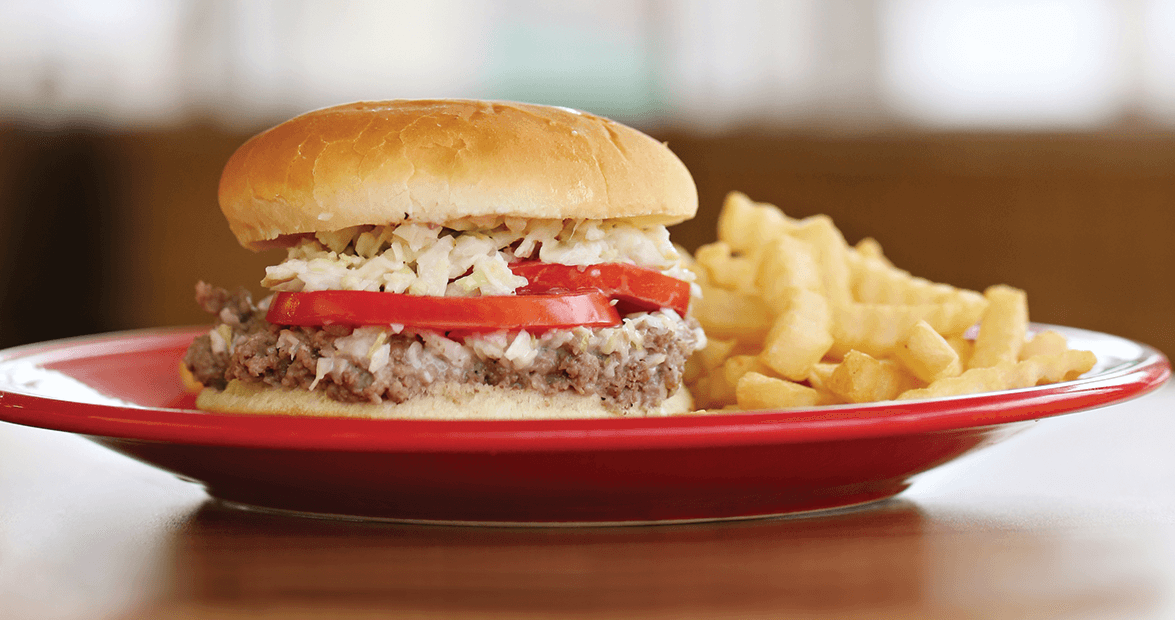 As an almost-native North Carolinian, I grew up on “The Andy Griffith Show” and Mount Airy’s role as the basis for the fictional Mayberry. I know the difference between Pilot Mountain (real place) and Mount Pilot (TV place). I have eaten the pork chop sandwich at The Snappy Lunch, and I even know the legendary sonker, Surry County’s version of a cobbler.

But a ground-steak sandwich? That one had slipped by me until I went searching for it recently.

Served at drive-ins and cafés all around Mount Airy, “ground steak,” sometimes called ground meat, is basically ground beef thickened with flour and water, served on a toasted, buttered bun, and topped with coleslaw, tomato, chopped onion, and mayonnaise (mustard at The Snappy Lunch). It’s like a sloppy joe without the ketchup.

And when a friendly waitress at the ’50s-era Dairy Center restaurant in Mount Airy gave me a free hot dog “ ’cause it’s your first time here,” I noticed another connection. The ground-steak sandwich is what Sheriff Taylor himself might have called kinfolk to another state tradition, the eastern North Carolina chili dog.

At places like Ward’s Grill in Whiteville and Dick’s in Wilson, our state’s classic red dog is topped with a special chili. Instead of browning the ground beef and stirring in seasonings, you boil the meat. That gives the chili a soft texture that’s perfect with the soft bun, the tender dog, and the creamy slaw.

Mount Airy’s ground-steak sandwich is similar to that chili. The texture is soft and the flavor is simple, almost sweet, with just a little thickness from the flour. It fits into a tradition of making things stretch that probably dates to the Great Depression.

The waitress at the Dairy Center really sealed the deal when she checked with the grill cook to find out how to make it: “Boil the meat, drain the grease, and add salt, pepper, flour, and water.”

For less than $3, it’s a cheap and tasty lunch.

Where to eat one in Mount Airy: