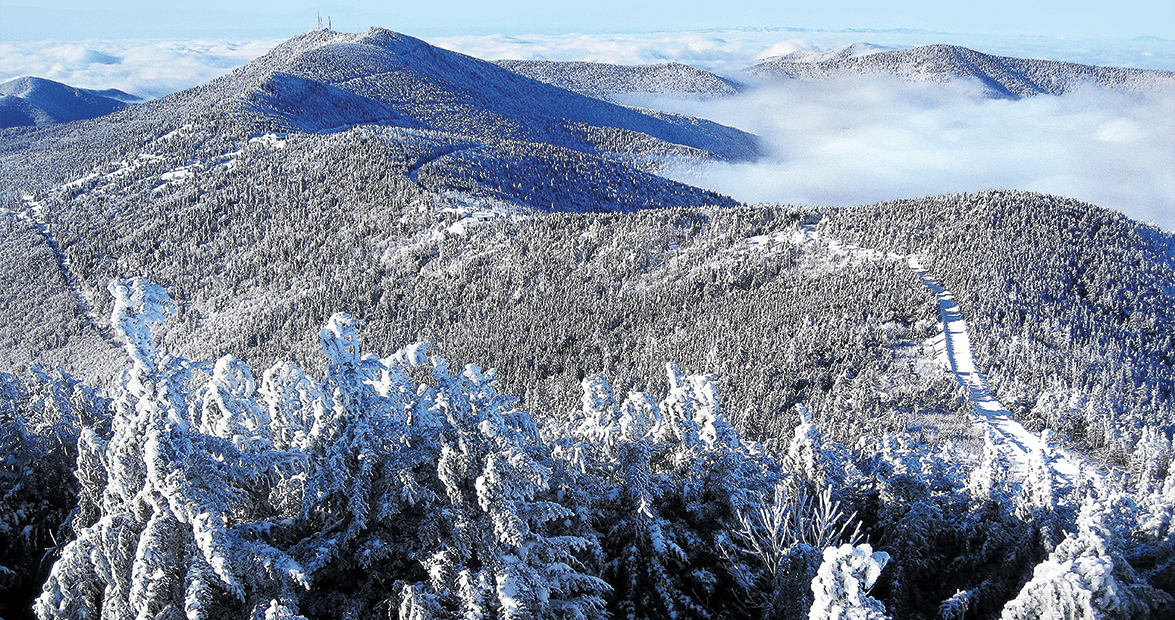 I sit near the top of North Carolina, drinking coffee inside a restaurant not far from the summit of Mount Mitchell, the tallest peak east of the Mississippi River. I relax by a window, and as I look out, the mountain captivates me.

I’ve never seen a view like this: rain, clouds, sun, and shadow, all at once, like the weather has the attention span of a 4-year-old. It’s changing so quickly, I think of the old saying: If you don’t like the weather, wait 15 minutes. Here on Mount Mitchell, the weather changes if you walk 15 feet.

What I’m about to do makes little sense: I will leave the warmth and comfort of this restaurant, drive a few thousand feet down the mountain, and take a long hike back up in the rain, straight through that angry nature.

There’s something about ascending to the top of a mountain. Few people wax poetic about descending into deep valleys. Fewer still get misty-eyed about a long walk across the plains. But there are countless odes to the joys of reaching new heights.

As I climb, I think about why.

Overcoming fear is part of it. The higher you climb, the farther you could fall. And the very name of this mountain should make anyone who climbs it stop and think about what they are doing and why they are doing it.

Mount Mitchell gets its name from Elisha Mitchell, a professor at the University of North Carolina in the early and mid-1800s. In 1835 Mitchell declared that the mountain was the tallest east of the Mississippi River. He calculated the height using barometer readings taken at the top and syncing them with readings taken elsewhere.

Mitchell measured other mountains in the area, and his claims about their heights caused confusion and controversy. Mitchell and Thomas Clingman, a senator and former student of Mitchell’s at UNC, went back and forth in newspapers about which North Carolina mountain stood as the tallest peak in the East.
Mitchell climbed the mountain that now bears his name several more times to retake the measurements. On June 27, 1857, Mitchell, alone at the peak, got lost. When he didn’t return, a search party formed and spent several days looking for him. A mountain man named Big Tom Wilson, who had led Mitchell’s initial climb up the mountain, finally discovered his trail. Wilson followed it to a creek that led to a waterfall. He looked down and saw Mitchell’s body in a pool of water at the bottom. Mitchell had fallen off a ledge, hit his head, and drowned. Historians believe that as darkness fell, Mitchell tried to hurry off the mountain instead of camping for the night. His watch recorded the time of death: 8:19.

The trail to the summit that exists today climbs 3,600 feet over 5.6 miles, a steady but not treacherous hike, much safer than the one Mitchell followed. At no point does the trail go so near a ledge that hikers could fall off. Still, Mount Mitchell is as rugged a place as you’ll find in North Carolina. In a letter to his fiancée that he sent shortly after starting work in Chapel Hill, Elisha Mitchell described the geography of North Carolina: “Here you are presented with a vast ocean of forest.”

Early in the 1900s, logging started to drain this vast ocean of forest. That led Gov. Locke Craig and the state legislature to create the state park system, with Mount Mitchell becoming North Carolina’s first park, 1,946 acres of preserved beauty.

When I arrive at the top, it’s like stepping from Mitchell’s time into the present. He would recognize most of the mountain, but not the summit. It features sidewalks, a concession stand, and a viewing platform. Also, a parking lot: You can drive almost to the top.

A sign marks the highest point east of the Mississippi River — 6,684 feet. I stand next to that sign, on top of North Carolina, and I want to take it all in, just like Mitchell must have done more than 150 years ago. I want to see beauty, grandeur, and bigness in the distance. I see nothing but dense clouds above, in front of, below, and around me.

So much for the view.

I’m disappointed, but not really. The mountain is draped in clouds and fog eight out of 10 days. I can look at pictures taken on clear days to see what I’m missing, but nothing can replicate what it’s like to stand here. In fact, not being able to see makes the moment even more powerful. A mountain without clouds at the top is not much of a mountain.

I wanted to get to the top of Mount Mitchell to see, but I realize now that that leaves so much out. Climbing Mount Mitchell is a full-body experience: A pounding heart. Heaving lungs. Cool wind on my hands and face. Adrenaline gives me a hiker’s high equal to the altitude I’ve reached. As I walk from the sign to the viewing platform, no person from here to the Mississippi River stands closer to the sun than I do.

I want to hang out at the top, bask in the moment, stay as close to the sun for as long as I can. But I’ve learned from Mitchell: It’s late, and I don’t want to get caught up here in the dark.

But I’ve figured out what makes the top so special: Scaling Mount Mitchell makes me feel like part of the mountain. As I looked out the window from the restaurant, I merely observed. At the top, I participated. I climbed so close to the clouds that I felt like I stood among them. As I looked in awe at the opaque sky, I contributed to the silence. By reaching the summit, I became a very small part of some far-off person’s vista, obscured though I might have been.

Elisha Mitchell is part of the mountain, too. He was buried here.