A chef brings the flavors of her native Jamaica to Edgecombe County, where recipes that she learned from her mother and grandmother — plus some soul food favorites — are served with Southern hospitality.

Yolanda Evans starts her mornings at 7:30 by donning a black apron, then cutting up cabbage for stewing, preparing dough for bread, and seasoning chicken and oxtails. In the kitchen of her restaurant at the edge of downtown Rocky Mount, she sings “Falling in Love with Jesus” by South African singer-songwriter Jonathan Butler. The soothing sound of her voice fills the room as she cooks the food of her ancestral home. 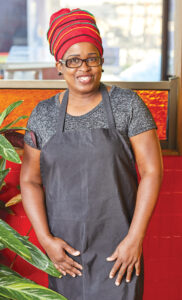 Yolanda Evans learned to cook from her mother and grandmother. photograph by Eric Waters

The hours pass quickly, and by the time Evans opens Taste of Paradise at 11 a.m., she’s at the drive-through window, handing takeout containers stuffed with food to hungry customers. Since the start of the pandemic, she’s converted the business into a drive-through only, and a steady stream of cars flows past the bright red-and-yellow building landscaped with tropical plants.

The Jamaican and soul food restaurant’s slogan promises to “bring the taste of the Caribbean to you,” but customers travel from Roanoke Rapids, Greenville, Virginia, and beyond for plates of candied yams, fried plantains, cabbage, curried and jerk chicken, rice and beans, and succulent oxtails — Evans’s most popular dish. She flavors the meat with thyme, garlic, onions, and her own seasoning blend, then braises it and cooks it in a pressure cooker. “I love my meat tender,” she says. “I don’t like to fight with my meat.”

Customers also hunger for “Yola’s famous banana fritters,” a sweet, doughy treat spiced with cinnamon. “It’s a cross between a banana fritter and a fried dumpling,” Evans says. “Some people call it monkey bread, sweet bread, or cornbread. They love it. They go to other Jamaican restaurants asking for it, and no one else has it.”

Evan’s fritters are a twist on the ones she grew up eating as a child. Originally from Paradise, a small town in the Saint Elizabeth parish of Jamaica, Evans learned how to cook from her mother and grandmother. Her grandmother’s house didn’t have running water or electricity, so the women learned how to make do. In 1986, Evans left the Caribbean and came to the United States, where she lived in Maryland for several years. She married her husband, Joeroyal, a few years later, and the family moved to Wilson in 2003.

When Evans realized that Rocky Mount didn’t have a Jamaican restaurant, she decided to start her own. Wanting to share her passion for good food with the close-knit community, she and Joeroyal opened Taste of Paradise in 2005. Word spread quickly about the friendly couple who makes everyone feel like extended family. The restaurant moved to Atlantic Avenue in 2008, and the Evanses opened a second location in Wilson in 2015.

Word spread quickly about the friendly couple who makes everyone feel like extended family.

For Evans, days that begin with her singing alone in the kitchen soon fill with the familiar faces of people whom she now considers part of her village. She makes a point of listening to her customers, which is why she expanded her menu to include soul food dishes like fried chicken, smothered pork chops, and corn.

In April 2020, wanting to help neighbors struggling to make ends meet during the pandemic, Evans rewarded her patrons with a Customer Appreciation Day. She gave free food to 600 people. “I didn’t expect that large a crowd,” she says. “The police told me, next time, let them know first.”

The Evanses — Yolanda, Joeroyal, and their son, General Manager Joeroyal Jr. — make their customers feel like they’ve been missed between visits. Cool drinks and hot plates of food are served with a smile. “We treat customers like family,” Joeroyal says. “We treat people the way we like to be treated — with love and respect.” — Bridgette A. Lacy 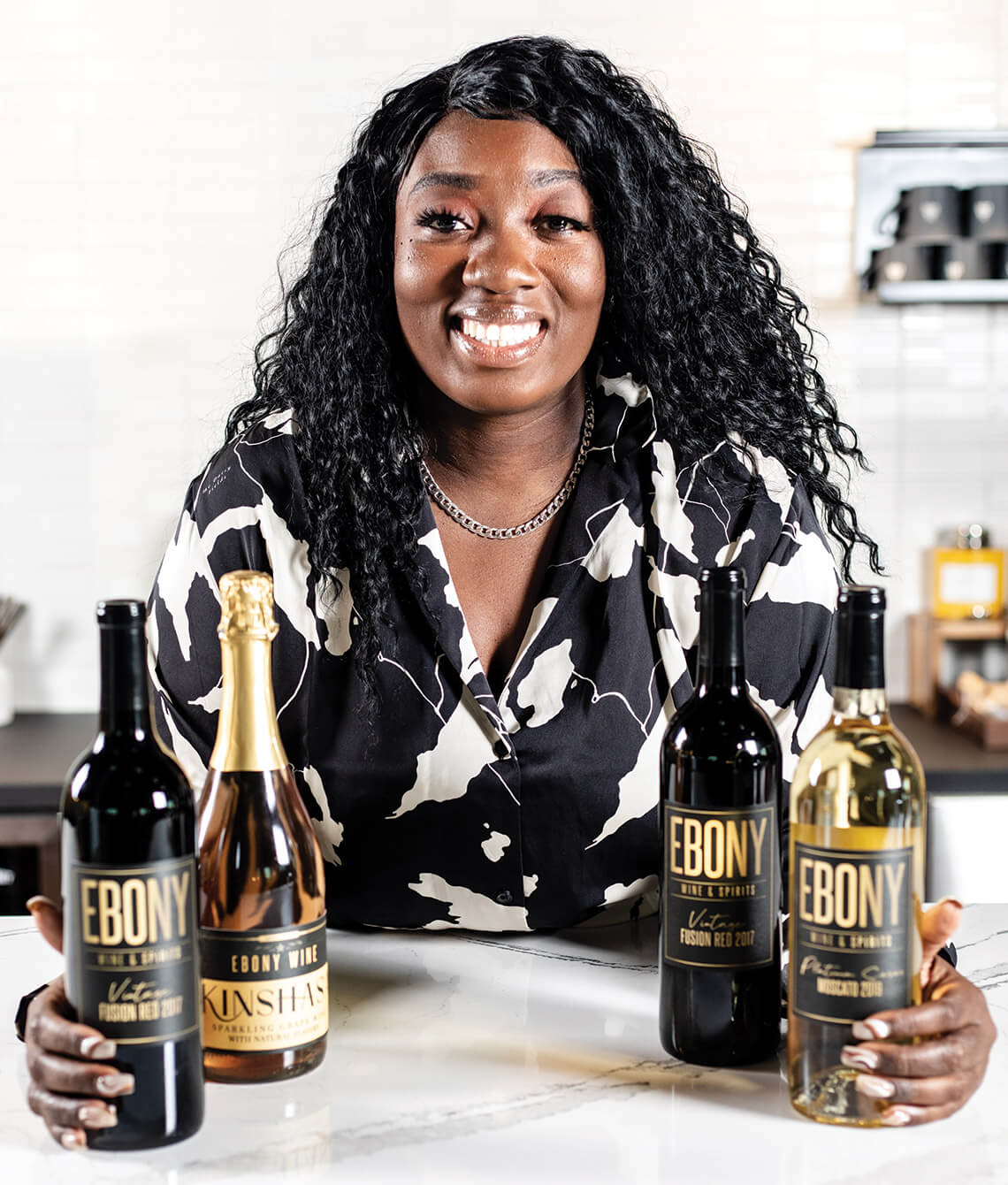 A dynamic social media presence has helped build a following for Ebony Wine & Spirits. One campaign poked fun at people who scoff at Moscato — until they try Camillya Masunda’s brand. photograph by JONATHAN COOPER

With a smile and a nod, the founder of The Queen City’s only Black-owned winery brings people together across cultures.

When Camillya Masunda travels, the one thing that always makes her feel at home is The Nod. “If you’re traveling and see another Black person in a crowd, you might be the only two people who look like you,” she says. “There’s a certain look, and a certain nod that says, ‘I see you.’ It’s an emotional connection without words.”

Masunda wants her Charlotte company, Ebony Wine & Spirits, to give its customers that same feeling whenever they see a bottle or have a glass of her wine. As the only Black owner of a wine and spirits company in Charlotte, she says, “I went into this business with the mindset of celebrating Black unity and culture around the globe. This culture is so vast, so diverse. I didn’t want to create a generic wine. I wanted a brand that could grab someone by the hand, touch somebody’s spirit.”

Ebony’s wines include a rosé, a red blend, a Moscato, and Kinshasa — a sparkling white that promises to transport your taste buds to Congolese fruit orchards. Launched in September 2020, the brand is authentic and fun, and you don’t have to be a sommelier to follow the conversation. “Whether you consider yourself a wine snob or you’re used to buying inexpensive wine, we want to say, ‘This wine is for you,’” Masunda says. “I don’t want it to come off like a super-serious wine. We have a top-quality, amazing product. But it’s not enough to have that without having the mission, and without building for our people.” — Emiene Wright 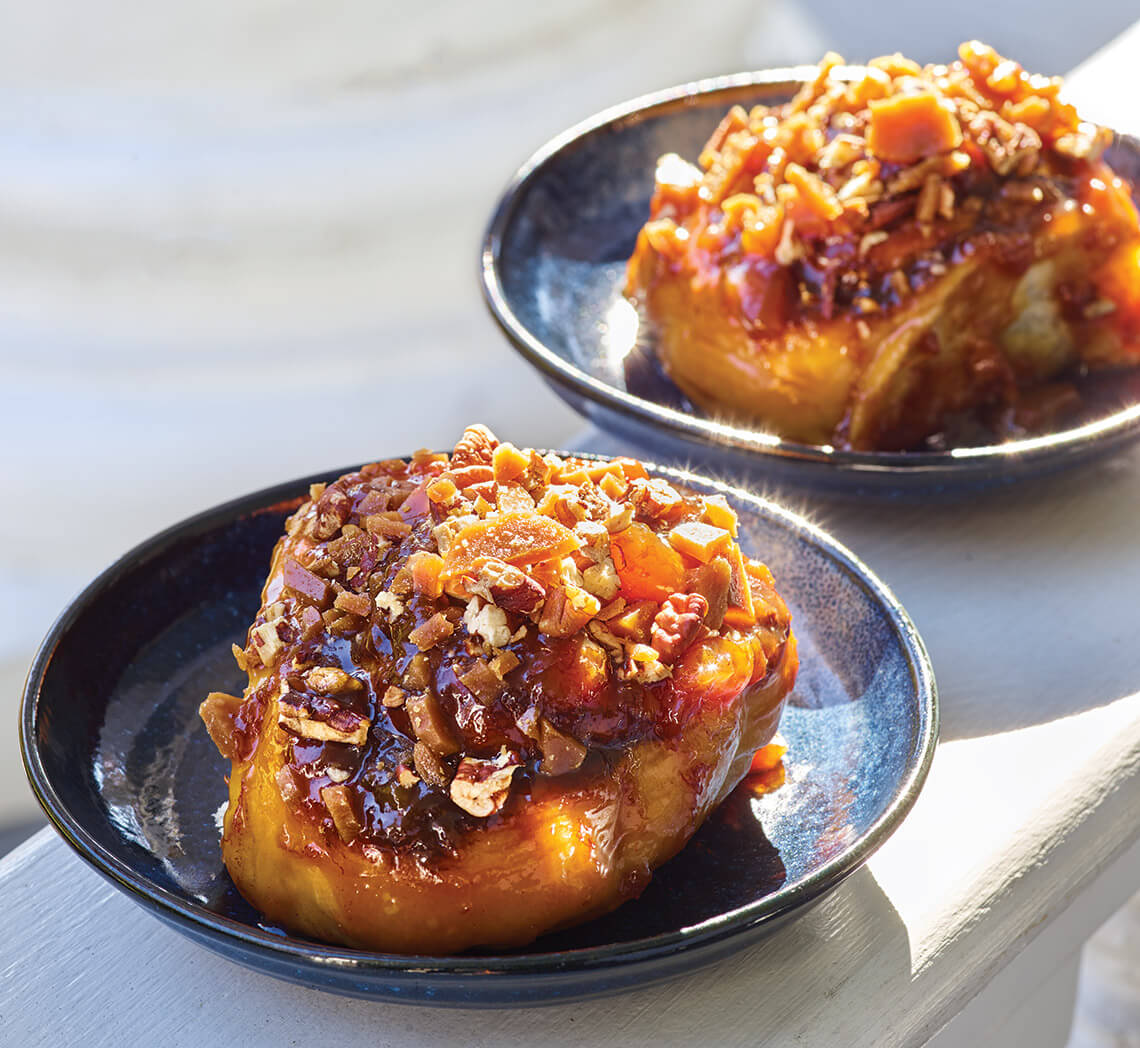 The Recipe for Success

One very tasty cinnamon roll helped a Guilford County baker cultivate a loyal following of folks eager for a bite of a timeless treat.

You might think you’ve had a great cinnamon roll, but have you ever had a $5,000 cinnamon roll? The judges of General Mills’ 2020 Neighborhood to Nation Recipe Contest knew they had when they sampled Greensboro baker Veneé Pawlowski’s bourbon “banoffee” pecan cinnamon roll.

The cash prize helped Pawlowski expand her side business into Black Magnolia Southern Patisserie, a bakery known for French classics with indulgent Southern flavor combinations. “I like to experiment with comforting foods that are nostalgic from my childhood, like a s’mores bread pudding,” says Pawlowski, who grew up baking with her grandmother. “I’m working on a cake right now that’s a take on the PB&J, but with a French chocolate buttercream. Baking has always been a creative outlet for me.”

One day soon, Pawlowski plans to open a storefront. But until then, locals know to look for her delicacies at the pickup counter of the Double Oaks Bed and Breakfast, Borough Coffee, Vida Pour Tea, and The Green Bean on Elm coffee shop downtown.

But, back to that cinnamon roll. The dough is just a little bit different — a brioche. Buttery, a little salty, light. The spiced filling isn’t overly sweet. And there’s something about the cinnamon: “Two different types — one that’s slightly floral, and the other is a traditional warm-spice cinnamon,” Pawlowski reveals. A little vanilla bean, a little salt, a little orange zest. “Made from scratch, made from love.” — Robin Sutton Anders