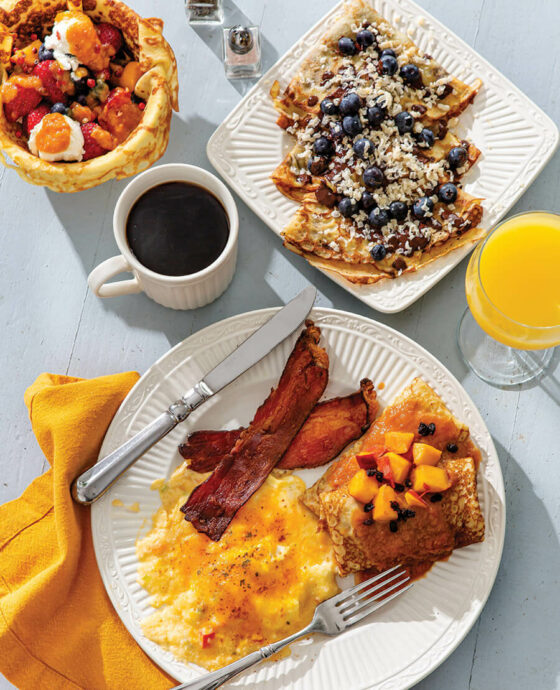 Anna Kitzis didn’t know what grits were until she moved to western North Carolina from Boston. But after settling in Waynesville and buying a bed and breakfast, she realized that she’d been eating the Southern favorite all her life, though she’d called it by a different name. Her father, who was from Ukraine, had taught her how to make a cornmeal porridge called mamaliga. When he wanted cheesy mamaliga, he would add feta — not so different from cheesy grits. That was another discovery: “I have found that there is a great division between people who eat plain grits and people who eat cheesy grits,” she says.

Kitzis purchased Oak Hill on Love Lane in 2019, after dreaming of owning a bed and breakfast for about 20 years. In her former role as a facility director for a social service agency, her job was to make sure that people were comfortable on a large scale. That experience prepared her to run Oak Hill — “much more so than my art degree,” she says. 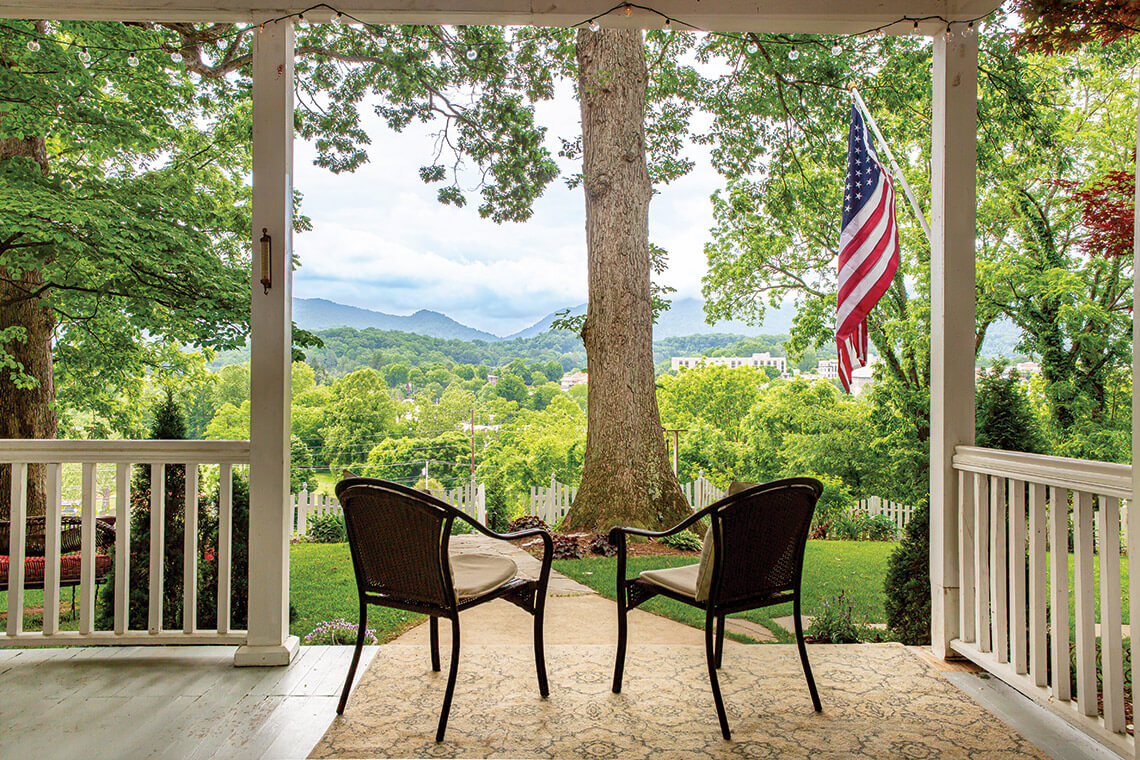 Oak Hill on Love Lane owner Anna Kitzis says that when guests see the view of Waynesville and the Great Smoky Mountains from the wraparound veranda, “cameras come out.” photograph by Tim Robison

Now, Kitzis takes care of people with breakfast served on her wraparound porch overlooking a photo-worthy view of the Smokies. She learned to cook the way her grandmother used to — without measuring, without exact directions, seasoning as she goes. When it tastes right, it’s ready.

Kitzis likes to experiment, and she likes the challenge of dietary restrictions. Her scratch-made items are gluten-free. Vegan, keto, diabetic — she’ll accommodate. But she also asks guests if they’d like to try eating something outside of their comfort zone, like Eastern European-style stuffed crepes, a nod to Kitzis’s Polish and Russian roots. She stuffs the crepes with farmers cheese and raisins and sweetens them with monk fruit or maple syrup. She might add a touch of orange zest. For those who aren’t the experimenting type, though, she’s just as happy to whip up some grits. 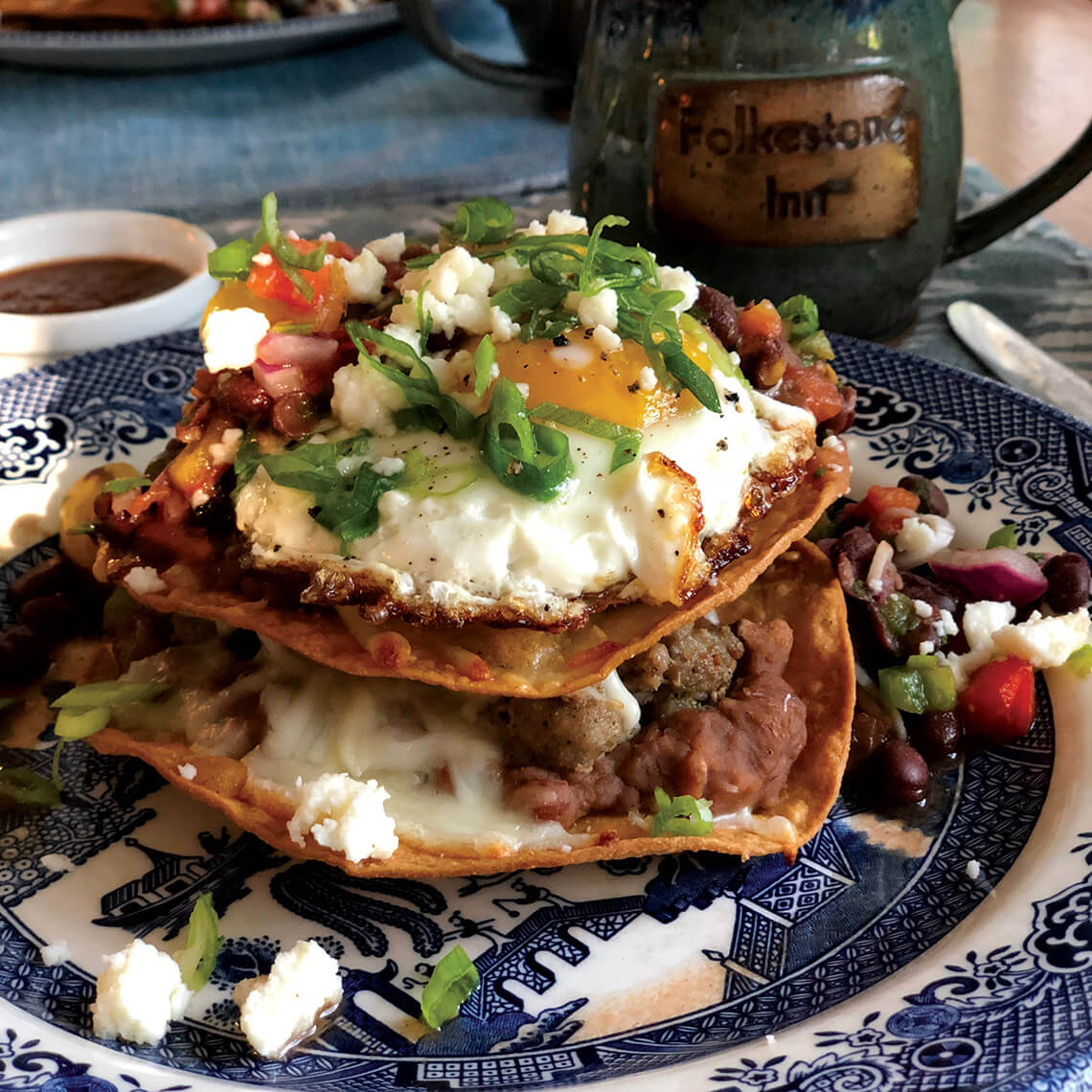 Scott Rowe hand-cuts thick slices of bacon from a 14-pound pork belly and lays them into his grandmother’s well-seasoned century-old Griswold cast-iron skillet. Over the past couple of weeks, he’s cured the meat using a mixture of salt and brown sugar, then smoked it over applewood in a smoke box behind the Folkestone Inn’s commercial kitchen.

Scott and his wife, Toni, purchased the Bryson City inn in 2016. Both are trained chefs — he studied at the Culinary Institute of America, she at Johnson & Wales University. The two met at Pinehurst Resort, where he was an executive chef and she was a front-of-house manager. After decades in the hospitality industry, they were looking for a change and wanted to be in business for themselves. They spent almost three years looking for the perfect place before falling in love with the mature hemlocks and maples that surround the Folkestone Inn. It was built as a two-bedroom farmhouse in 1922 and expanded over the decades, now offering 10 guest rooms.

While Scott works in the kitchen, Toni serves breakfast in the dining room. The first course is fruit — locally sourced, when in season — and homemade bread, which might include doughnuts stamped out from Scott’s mother’s antique doughnut cutter. The second course is meats, eggs, and veggies. Scott cures and smokes the inn’s bacon and ham and grinds the pork sausage. Toni harvests the eggs from their chickens, some 30 to 50 at a time, the flock squawking and clucking as they follow her around the vegetable and herb garden and to the coop. The garden provides fresh produce in the summer, and canned and pickled vegetables throughout the colder months.

Still, the real prize is the Folkestone’s bacon. “That’s the most asked question: How do you do your bacon?” Scott says. “People love it.”

The scent of warm vanilla fills the kitchen of the 1898 Waverly Inn as a double waffle iron bakes blueberry buttermilk batter into waffles, extra crispy on the outside and moist and fluffy on the inside. When they’re finished, Mike Burnette — who owns the inn with his wife, Tracey, and shares breakfast duties with Chef Lily Krupp — plates the waffles and dusts them with a layer of powdered sugar before they’re served to guests along with maple syrup in a handmade ceramic pitcher.

In the dining room, just outside the kitchen, guests start the morning with some of the inn’s special caramel apple mimosas — glasses of champagne and apple juice rimmed with sea salt caramel and cinnamon sugar, a toast to Hendersonville’s apple farmers and just one of the mimosa flavors that the inn offers.

During the nightly social hour on the inn’s front porch, just steps away from Hendersonville’s Main Street, many of the guests mingle and enjoy glasses of wine and craft brews — the inn serves more than 70, many from local breweries. Often, guests will become friends and go out to dinner or a show afterward. The next morning, they’ll join each other for conversation over scrambled eggs with house-made pimento cheese, biscuits and sausage gravy, or eggs Benedict. The specials are different every day, but Mike’s favorite thing to cook is the waffles: “They’re just so delicious!” 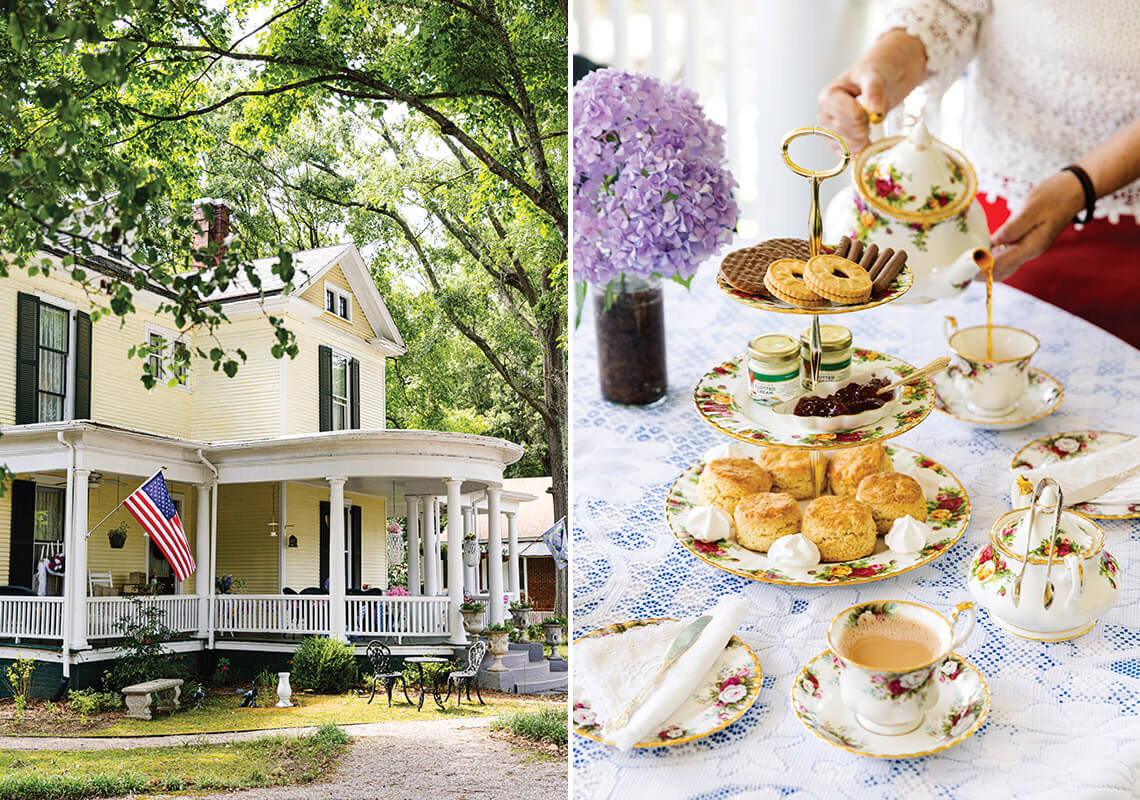 The second course of afternoon tea at The Ivy includes clotted cream and jam to spread on Karen Kelley’s homemade scones. photograph by Anna Routh Barzin

The coffee table in the front parlor of The Ivy is set with Royal Albert bone china — each delicate, pearly white, gilded-edged piece adorned with roses. A teapot filled with black tea sits snug in its Union Jack-decorated tea cozy. Karen Kelley delivers the second of three courses for an English afternoon tea: a three-tiered stand stacked with lemon meringue cookies, miniature tarts, and warm scones ready to be smeared with clotted cream and jam.

Karen, who owns the circa-1900 Victorian bed and breakfast in Warrenton with her husband, Mike, spends three to four hours preparing each tea. She bakes the scones and the sweets and makes bite-size sandwiches of thinly sliced bread and English ham, or cream cheese and cucumber, or mature Cheddar cheese and Branston pickle chutney. Each tea is a little different, but the third course is always a Victoria sponge cake — a dessert named after Queen Victoria that comprises raspberry jam and buttercream sandwiched between two spongy layers of cake.

Between serving the courses and brewing more tea, Karen chats with her guests. “To me, a bed and breakfast is enjoying people’s company,” she says. “It’s a personal experience.”

Karen and Mike were living in New York, where Karen had immigrated from England years earlier, when her decades-old desire to own a bed and breakfast resurfaced. She’d enjoyed the afternoon tea tradition with family back in England and wanted to share that experience with guests. Longing for a slower pace of life, the couple looked for places to settle down in North Carolina. The Ivy’s beautifully preserved Queen Anne-style architecture and Warrenton’s relaxed vibe and friendly people felt right.

Karen had authentic English suppliers lined up for the teas before they closed on the house. The meats come from Parker’s, a family of English butchers in New York, or from Jolly Posh Foods in Chicago. Jams come from England, when Karen can get them. And the china? Much of it was passed down from Karen’s late mother, carefully packed and flown across the Atlantic.

Camille Klotz brushes olive oil on thick slices of bread — darkened with stout beer and baked in a wood-fired oven the day before by her husband, Joe. She then tosses them on her flat-top griddle and adds sharp white Cheddar, a grilled tomato sprinkled with rosemary from her garden, and two eggs poached in chili oil. She tops it all with a big slice of avocado and grilled red onion before delivering the French toast to the formal dining room in the Hanna House Bed & Breakfast, which she and Joe opened in 2000.

Like many of the inn’s dishes, Camille concocted the savory French toast recipe herself. “I think about food all the time,” she says. She gets inspiration from cookbooks and magazines, and learned a lot about cooking from her grandmother. She also earned a degree in culinary arts and hotel management while working as a dental hygienist and dreaming of owning a bed and breakfast. She and Joe had only lived in New Bern for six months when Camille came across the house while jogging. Despite its state of disrepair, she was attracted to the house’s downtown location and Victorian grandeur.

Breakfast at the inn starts with coffee, roasted by New Bern’s Bellator Roasting Company and ground by Camille every morning. She squeezes the orange juice herself, too. The first course is fruit, like pears purchased at the New Bern Farmers Market and poached with butter and honey from Camille’s own beehives, then topped with pistachios. Main courses rotate, with 20 to 25 choices offered at any given time. If you’re lucky, one of those just might be the savory French toast — but when it comes to breakfast at Hanna House, you really can’t lose.