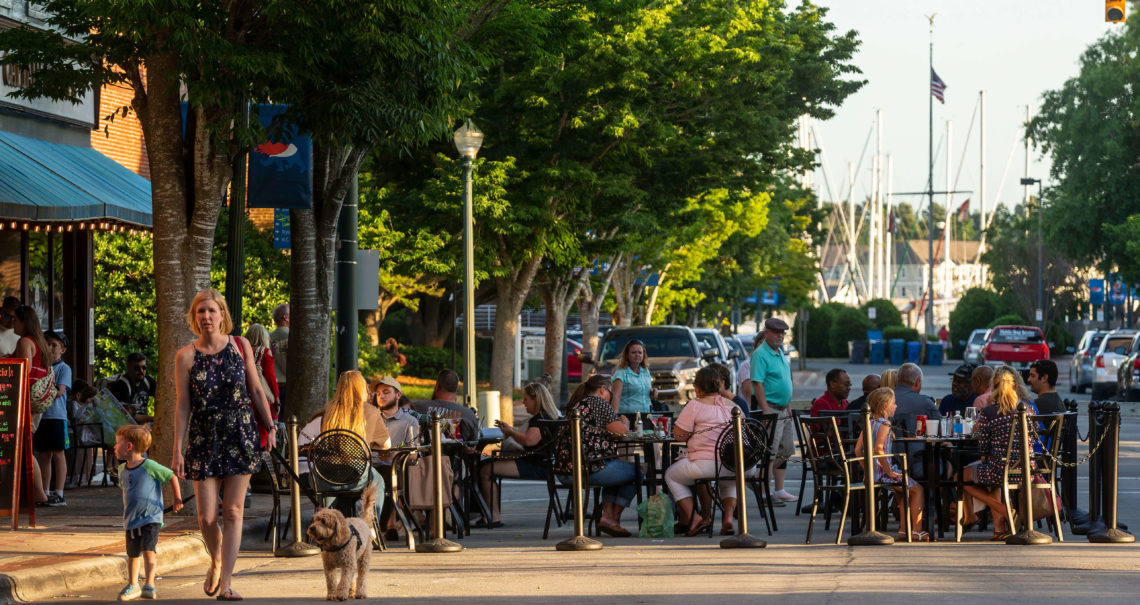 The wind on his face, surrounded by the river, Rodney Alexander feels at home guiding his 42-foot sailing catamaran down the Neuse. “I know it’s where I belong, and I want to share it with people,” he says.

Captain Rod, a former attorney, and his wife, a former emergency physician, chose New Bern for their boat charter service AquaventuresNC because of the city’s character. “There’s a sophisticated, small-town feel to New Bern,” Alexander says.

With miles of peaceful waterways, North Carolina’s first capital city features historic charm at every turn. But New Bern is more than its 300-plus year history — its robust downtown is alive with eclectic shops, restaurants, art galleries, and craft breweries.

Want to spend an exciting weekend exploring? Read on for our three-day itinerary and pack your bags for a fun-filled coastal vacation.

Does Southern hospitality still exist? You bet it does. Downtown New Bern is filled with locals ready to show off our trendy boutiques, restaurants, and beer district. Try On New Bern to experience this firsthand. 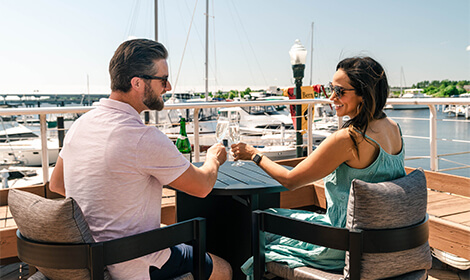 When you pull into New Bern, follow the beat to Union Point Park, a scenic venue with expansive waterfront views. On several Friday nights throughout the summer, the city presents free, live concerts, complete with food trucks and bands like Trial by Fire and the Pamlico Sound Machine. Union Point Park sits where the Neuse and Trent rivers meet to travel as one to Pamlico Sound. Here you’ll find the start of the Riverwalk — a great place to stroll along the water and breathe in the briny breeze.

Once you’ve worked up an appetite, head over to Cypress Hall Kitchen and Bar, New Bern’s newest restaurant opened by local celebrity chef Ashley Moser. Its soaring ceilings, exposed bricks, and oversize bar give the restaurant a hip, modern vibe. And although its menu has international influences, its Southern roots shine through in many of its dishes. Seasonal entrées, like cider-braised pork cheeks, and homey small plates — think pimento cheese served with pork rinds — are created with fresh, local ingredients. Finish your meal with a slice of Mema’s famous strawberry cake, a beloved family recipe — and an absolute must-try. 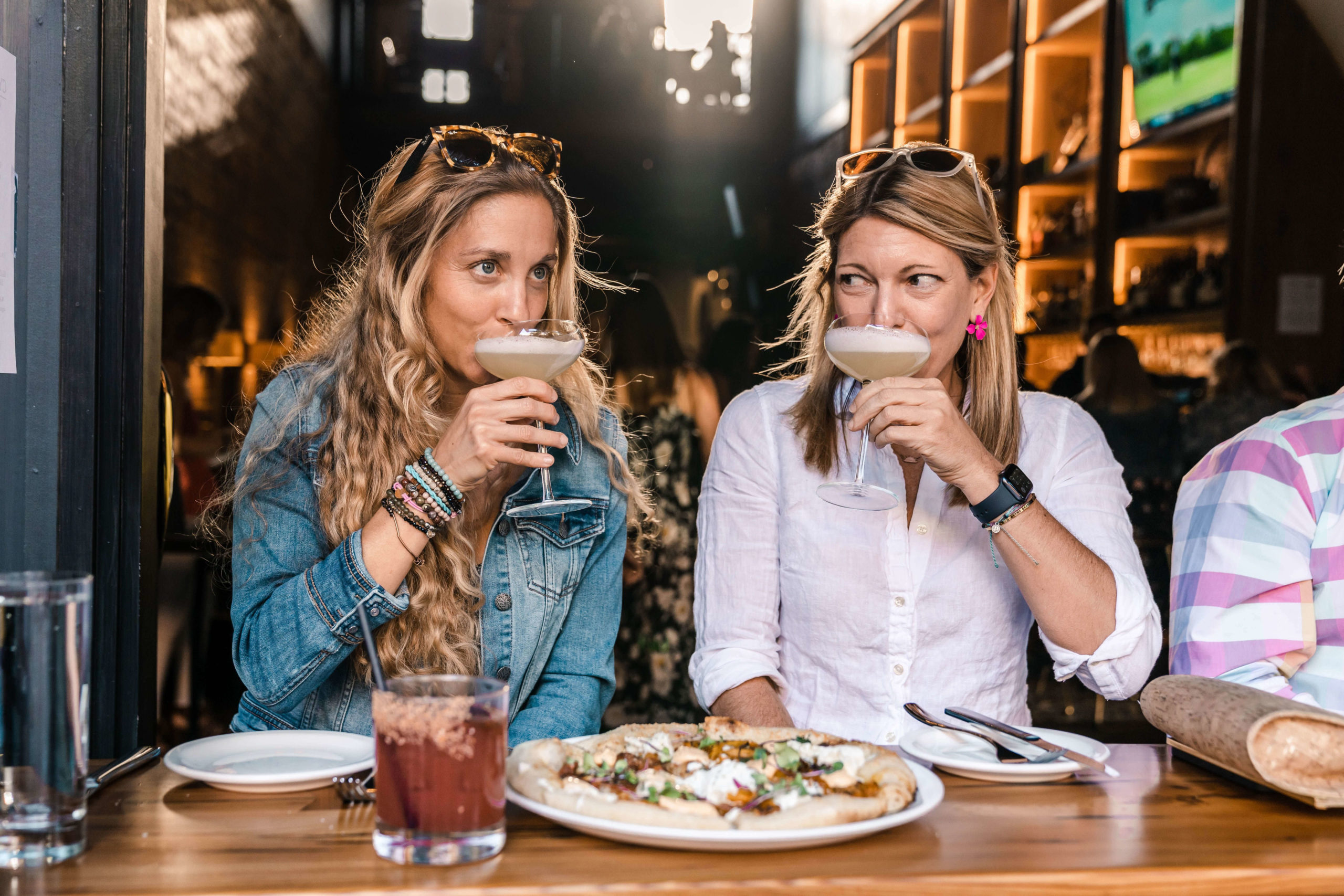 Cypress Hall Kitchen and Bar has a hip, modern vibe, and its Southern roots shine through in many of its dishes. photograph by Visit New Bern

Kick off your first full day in New Bern with coffee and a breakfast sandwich at Bella’s Café and Catering, then cozy up on the couch while you wait for your meal. If you feel right at home, that’s exactly the way owner Sandy Quinonez wants it. “I tried to make it kind of like a big living room where you can come in, sit down, and relax,” she says.

The café’s made-from-scratch menu items include baked goods based on recipes Sandy learned growing up in the kitchens of her mother and grandmother. Before you leave, pick up some cinnamon rolls and Boston cream donuts — if they haven’t sold out.

Two doors down, inside the Craven Arts Council’s Bank of the Arts, the lofty and ornate ceiling, complete with a grand skylight, is a sight to behold. But the artwork within is the real star of this space. This bank-turned-gallery’s changing exhibits showcase works in a variety of media from artists throughout the Southeast. 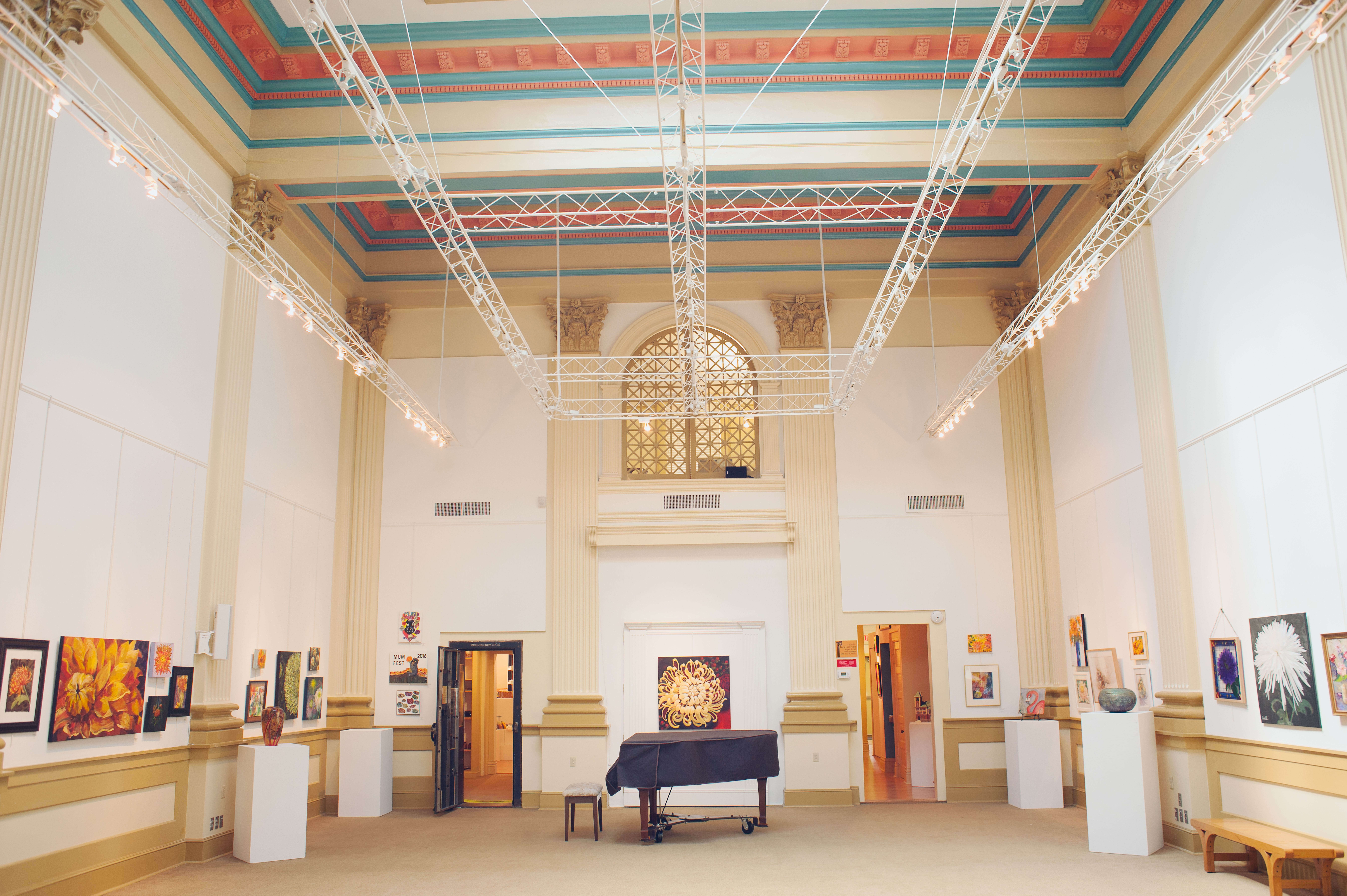 The changing exhibits at the Craven Arts Council’s Bank of the Arts showcase works in a variety of media from artists throughout the Southeast. photograph by Visit New Bern

If you’re interested in seeing more of the city, stop by the New Bern Cub House for self-guided walking tour maps, or find them online, and learn more about the area’s churches, African American heritage, historic homes, and more on foot. And be sure to pick up a Bear Town Bears map to hunt for 28 creatively decorated bear statues found throughout downtown — a nod to New Bern’s name: “Bern” means “bear.”

After exploring on foot, wet your whistle: Famous for being the birthplace of Pepsi, “the taste born in the Carolinas,” New Bern offers its visitors the exclusive chance to experience where it all started. Swing by The Birthplace of Pepsi-Cola Store to learn more about pharmacist Caleb Bradham’s cola — and order an ice-cold fountain Pepsi from the pharmacy counter where it was first created in 1898. 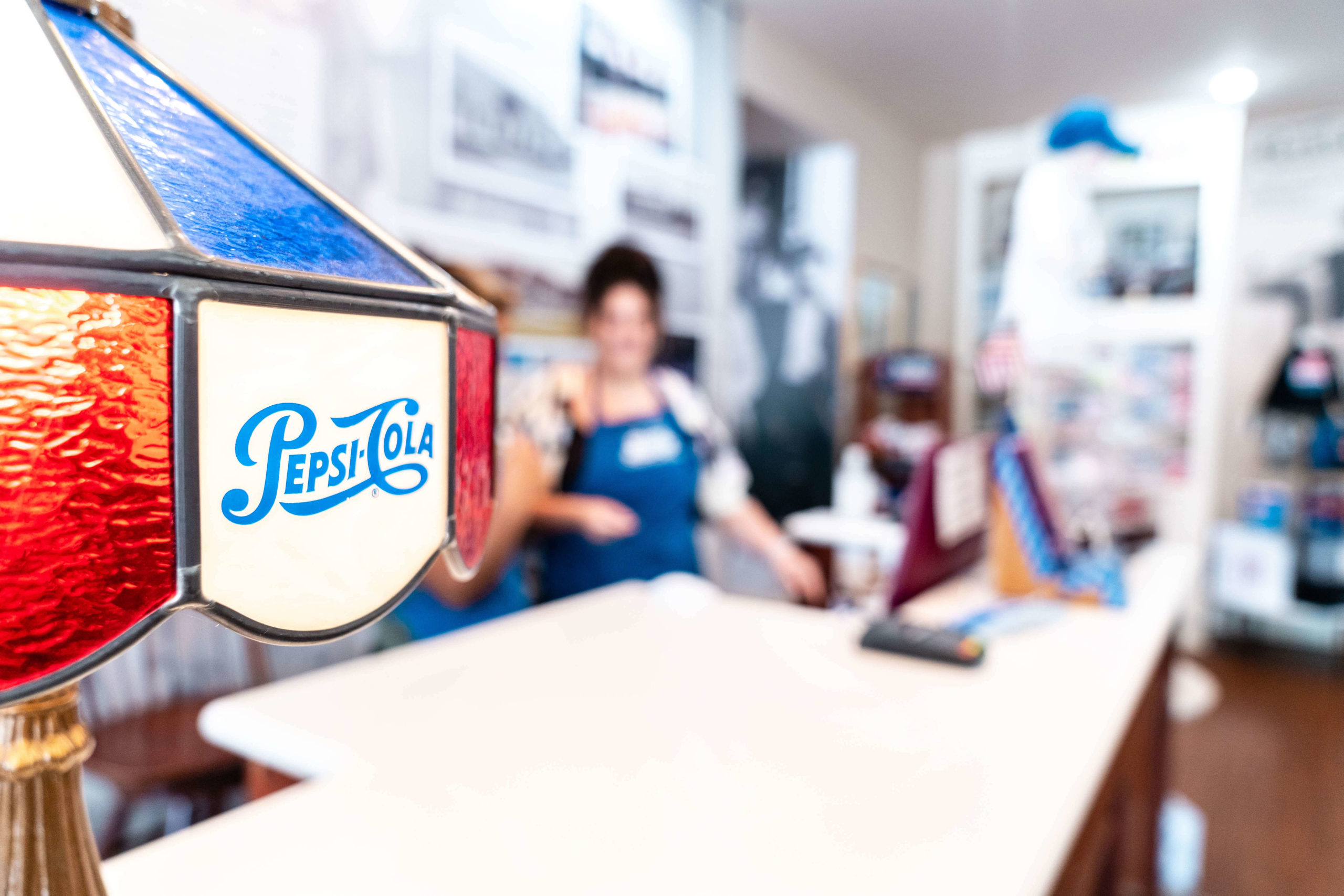 Famous for being the birthplace of Pepsi, New Bern offers its visitors the exclusive chance to experience where it all started. photograph by Visit New Bern

When you’re ready for a bite to eat, take a seat at MJ’s Raw Bar and Grille. If a table out front is open, you can people-watch while savoring an oyster po-boy or MJ’s self-proclaimed “best in New Bern” crab cakes, packed with lump crabmeat. But don’t bother with a second spoon for your cheese grits — they’re too good to share!

After lunch, dedicate your afternoon to Tryon Palace, North Carolina’s first governor’s mansion. “It’s one of our top attractions,” says Melissa Riggle of the New Bern Visitor Center. “It’s probably our crown jewel.” The home’s 16 acres of grounds include formal colonial revival gardens, intricate paths and pruned hedges, marble statues, a kitchen garden, and the NC History Center, where your family can learn about our state’s history through hands-on exhibits. 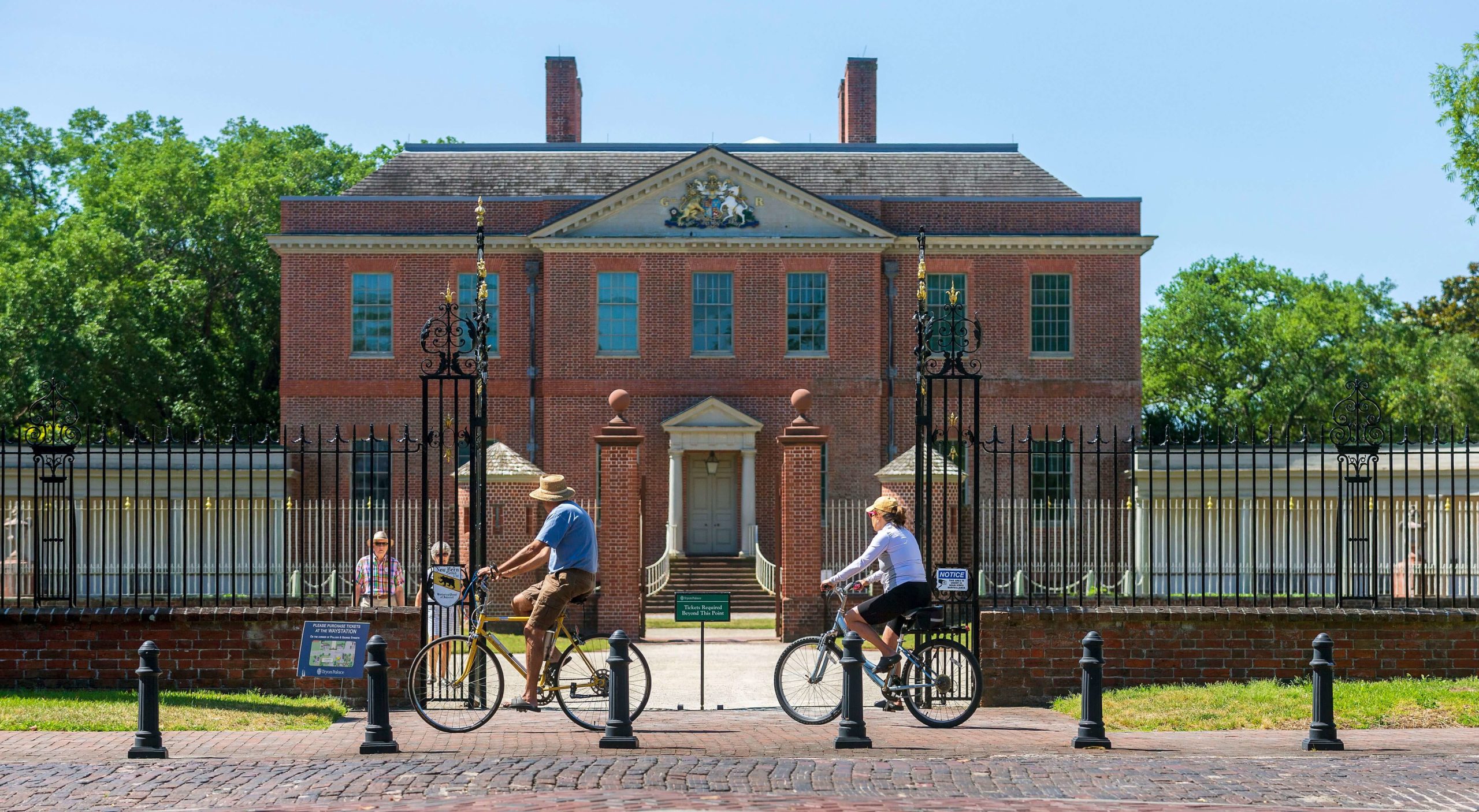 Tryon Palace also hosts performers like the NC Symphony, events like Outlander Weekends in July, and Live and Local — a one-day festival in August celebrating local food, breweries, and music. Visit the official events calendar for more information on events throughout the year.

Try a pint at the trio of family friendly spots offering indoor and outdoor seating, each with its own unique twist: Relax in Brewery 99’s beer garden while sipping Confignorant, an American-style pale ale and local favorite, or try Coastalina Mist, a light and refreshing hard seltzer. Tap That Craft Beer and Wine Bar includes a restaurant, indoor stage, and courtyard complete with outdoor games. While you’re there, grab a hazy IPA, and stay for a game of corn hole. Across the street, Freshwater Beer Co. opens the garage doors of the former service station during fair weather, allowing you to enjoy its selection of wine, small-batch brews, and craft beers outdoors. 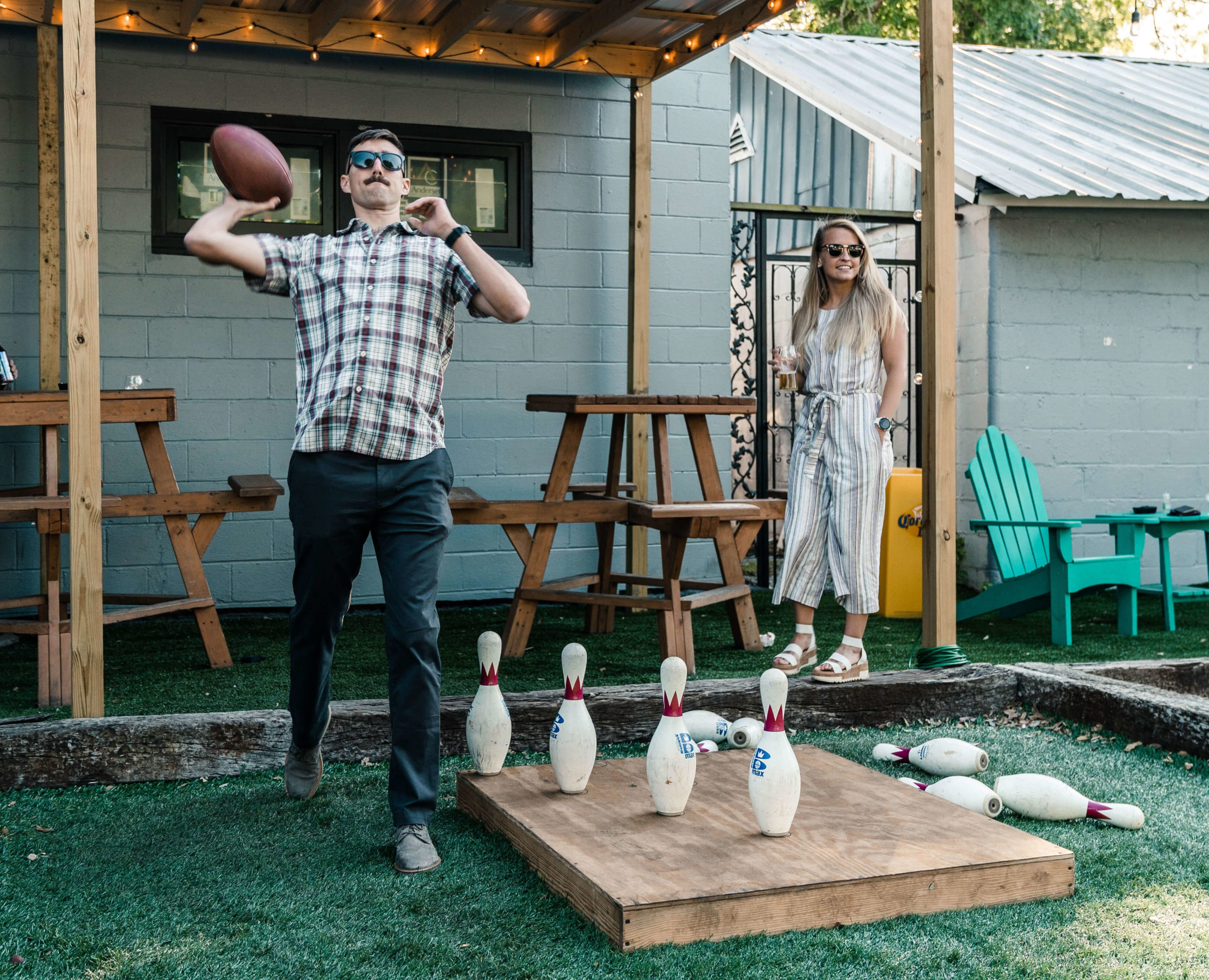 For dinner, try The Chelsea, serving new-American cuisine — such as the locals’-favorite shrimp and grits, Brussels sprouts salad, and fried green tomatoes — in a setting filled with charming ambiance. The 1912 building, first used by Pepsi-Cola’s Caleb Bradham, was renovated to accent original features including an intricate tile mosaic floor and pressed-tin tiles adorning the sky-high ceiling. And yes, you’d be excused for ordering a glass of Pepsi to bring your day in New Bern full-circle.

Kick off your final morning in New Bern by seeing the city from a different perspective — aka lazing away with Captain Rod aboard Respite. Fancy a swim? He’s happy to drop the anchor at one of his favorite Neuse River coves. Or sail Upper Broad Creek to Latham Whitehurst Nature Park while watching for pods of dolphins. “We occasionally see otters in some of the creeks, too,” Rod adds.

Back on land, New Bern Tours and Convention Services offers a 90-minute Historic Trolley Tour, where you can sit back and enjoy the ride through downtown New Bern while an experienced guide shares the backstories of the colonial period through the Civil War.

Finally, end your visit with a waterfront brunch at the casually elegant Persimmons. Try buttermilk waffles with locally grown blueberries and cinnamon-creamed honey while seated on the riverfront deck. Or, if you’d rather something savory, dine on eggs Benedict with Cheddar bratwurst. With serene riverfront views and delicious food, it’s the perfect way to polish off your exciting New Bern getaway. 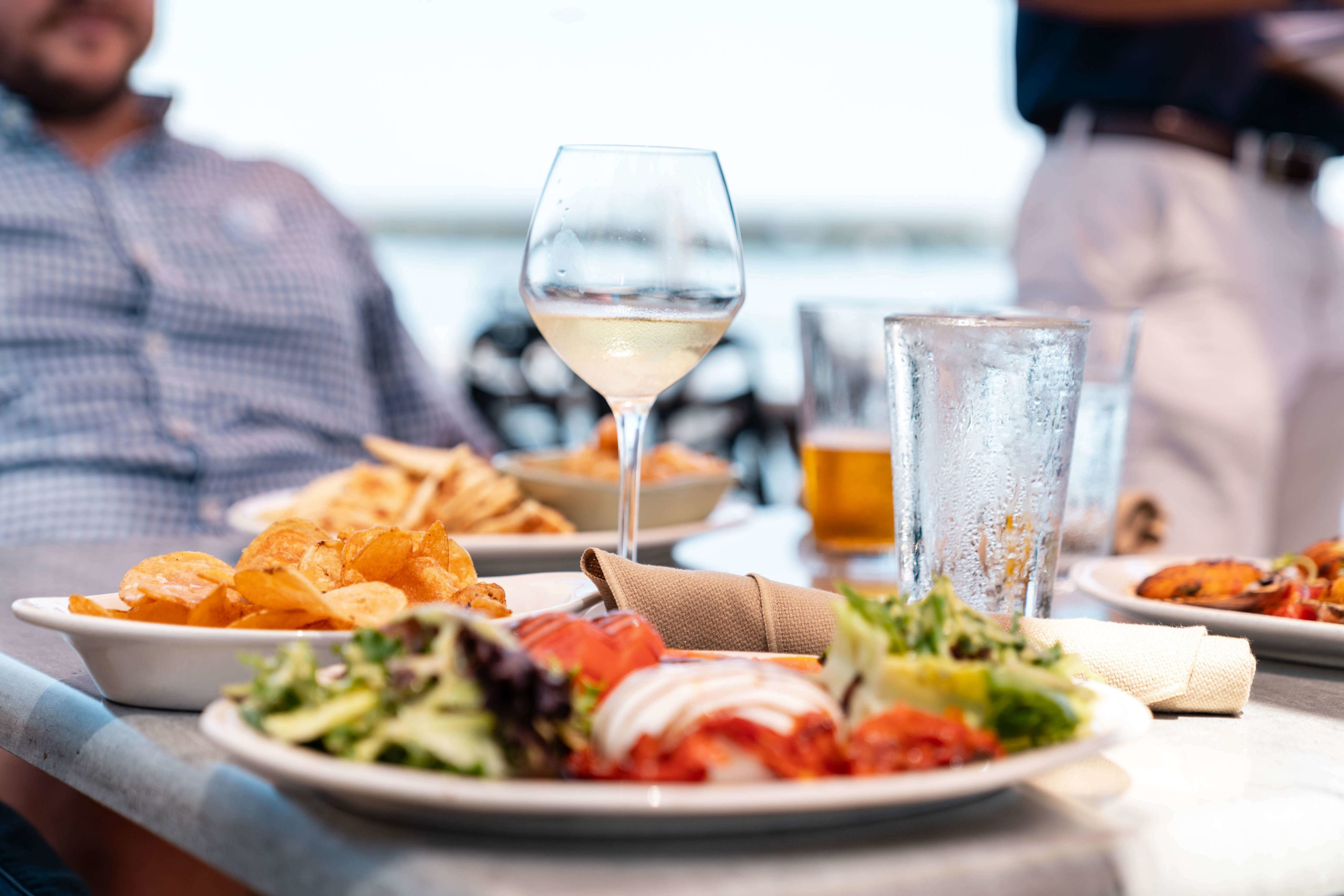