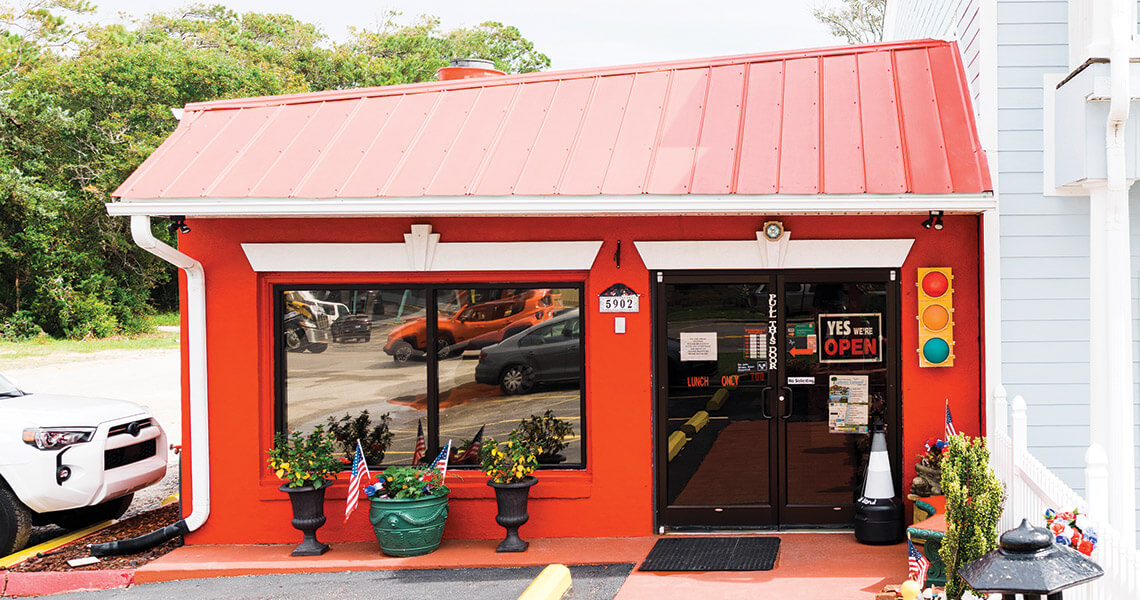 From the entrance, it might take a minute to spot her amid the steady march of customers and orders coming in and going out. Sure enough, Little Bit is behind the grill — on her feet, her hands busy, the very model of quiet efficiency. As she prepares the burgers, one after another, her watchful eyes take measure of everything: service, cleanliness, and, above all, the quality and quantity of food served. It matters to Little Bit that everyone leaves her diner well fed.

Housed in a bright red building, Little Bit’s Grill sits a stone’s throw from the beaches of Oak Island. It’s unmissable not just because of its cheerful sign but also because of the aroma emanating from it. Inside, the red booths are usually packed with customers whose faces are hidden behind massive burgers done Bit’s Way (lettuce, tomato, mayo, onions, and pickles).

Little Bit’s Grill mostly looks the part of an all-American diner, with its splashes of red on the seats and walls, but it also comes with delightful and unexpected Vietnamese touches. Artwork inlaid with mother-of-pearl hint at the story of the woman behind the grill.

“Mom’s real name is Nhien Wood,” says Little Bit’s daughter, Kim Bifano. “In Vietnam, her nickname was Bích,” pronounced Bick. “When she gave her name here, people thought she was saying ‘Bit.’ With her being little [of stature], the name Little Bit stuck.”

Little Bit will turn 80 on June 19 of this year. Rumor has it that on September 5, she’ll hand over the reins to Kim. “I don’t think Mom will ever retire,” Kim says with a laugh. “She’ll probably still show up to prep.”

Today, like every day, little bit arrives at the grill at 5:30 a.m. after having slept for no more than four hours the night before. She begins by chopping cabbage to make the slaw. She forms all of the patties by hand and slices the tomatoes and onions. In all these years of operation, Little Bit has never measured a hamburger. She simply tests them by feel. She uses fresh products and believes that her customers should get their money’s worth.

“I also think our grill is seasoned, like cast iron,” Kim adds. “It’s 20 years old. And my mom gets a kick out of feeding people. She has the magic touch.”

That’s easy to believe. The story of Little Bit’s Grill, after all, is the story of one immigrant family and the indomitable woman at the heart of it. It’s about their move from Saigon, Vietnam, at the end of the war in 1975, first to Florida, and the following year to Southport.

“Florida was tough,” Kim says. “Mom looked like a teenager. She didn’t speak any English. People would spit, ask questions like, ‘What are you doing here?’” 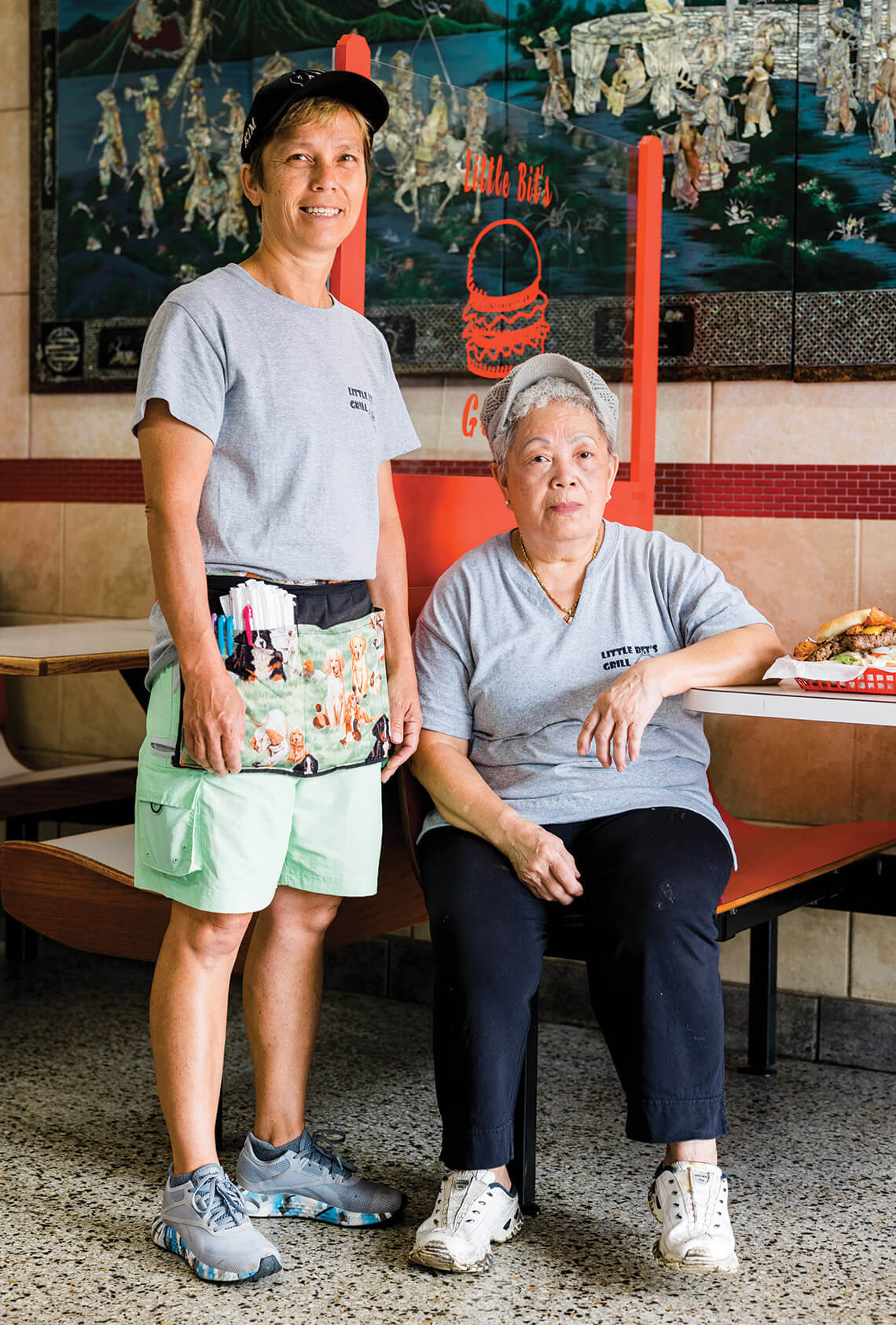 In North Carolina, the family found more acceptance. But then, in 1978, Kim’s father passed away. “Within three months’ span,” Kim says, “Mom had to get a car, learn how to drive, get insurance, and worry about my sister and me. She worked three jobs at first, starting at 4:30 in the morning. My sister and I were latchkey kids. In all this time, Mom has never been on food stamps. If she didn’t earn it, she didn’t want it.”

The first Little Bit’s Grill opened on Oak Island’s Long Beach Pier in 1987. The pier would close for three months every year, but for the remaining nine, the grill served breakfast and lunch daily. The current location opened in August 2002. On the first day, a serpentine line of customers waited impatiently for Little Bit’s famous burgers. Her reputation had marched five miles down the beach from the pier.

That reputation marches on, having turned generations into regular customers over the years. Many of the current regulars were, in fact, introduced to Little Bit’s by their parents. They come for crispy onion rings, grilled chicken sandwiches, massive hamburger steaks with a cult following, hot dogs all the way, and, most of all, burgers the size of small ships. And they know that the grill operates every day except Sundays and Tuesdays — but if the “Gone Fishing” sign is up, Little Bit is unwell and won’t open for the day.

For this writer, a question lingered: “What does Little Bit eat when she’s not making hamburgers?” There is homesickness at the heart of this question because, like Little Bit, I, too, am an immigrant in this country, and while I can happily eat American food for my meals maybe two or, at most, three days in a row, on the fourth day, my entire being will revolt if my taste buds don’t hang out with spices.

“My mother does not eat hamburger,” Kim says. “Not a day goes by when she does not eat rice or noodles. If she makes a mistake at the grill, she will eat her mistake. But if we go out, it’s to Vietnamese restaurants.”

In Oak Island, an ocean or two away from Vietnam, Little Bit found a second home for herself and her family by mastering a new cuisine. And then she opened her doors and warmly welcomed the community. In the coming years, whether Kim follows in the exact footsteps of her mother or ushers in change, one thing is clear: Nourishing every guest with tasty burgers and warmth will always be a priority at Little Bit’s.