I catch Jeremy Haynes at 3 o’clock on a weekday, in between rushes. Lunch is a show; dinner is a show. “Phone off the hook, line out the door, music’s always really good, and from the outside, it looks like madness,” he says. People come for the burgers, sure, but everybody also loves the barely controlled chaos. Haynes laughs a tired, proud laugh. “Everybody gets their food, though, and it’s cooked good, and they get it when we tell them they will.”

Haynes has owned Nick’s Old Fashion Hamburger House in Davidson County with his wife, Casey, since April of 2020. They bought it 10 years to the day after the founder, Ralph Brauser, opened it in 2010. Nick’s, named for Brauser’s son, wasn’t supposed to be one of the best burger joints in North Carolina, by the way — it wasn’t even supposed to be a burger joint at all. “It was supposed to be a hot sub shop,” Haynes says. “But there was a pizza place in the building selling subs, and it turned out that there was a noncompete, so Ralph said, ‘Well, let’s step back and punt.’ ” 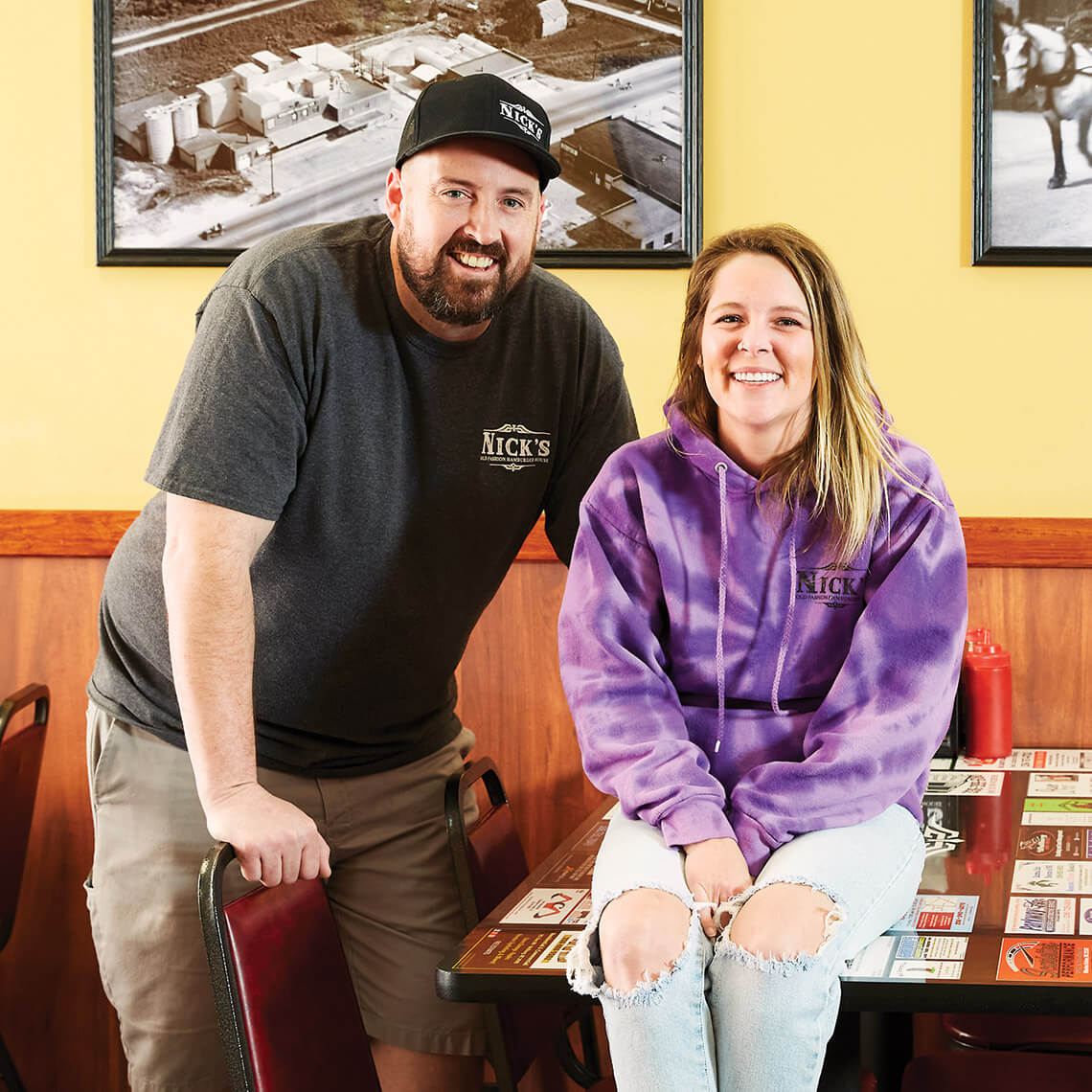 That punt has become a nationally recognized flat-top grill turning out 5,000 burgers a week. (In 2021, Reader’s Digest named it one of “The Best Small-Town Restaurants Across America.”) Haynes was a regular — a guy selling insurance, fairly unhappily — who became almost like a brother to Brauser. That’s how it goes at Nick’s, where the lines between work and kin seem hazily drawn. Brauser’s son, now 17, works the line. “A lot of these people, we all know,” Haynes says. “These are people’s daughters and nephews that we hire. And I’m just trying to carry on Ralph’s legacy. The menu is just like Ralph had it, and every customer that comes in feels like they’re Ralph’s or my favorite.”

The restaurant business is always a gamble, but Haynes knew that he’d made the right choice, he says, on the very first morning the place was his. “I turned on Sinatra, or maybe the Red Hot Chili Peppers, or maybe Notorious B.I.G.” The soundtrack at Nick’s, it seems, is wide-ranging. “I started cutting onions and peppers, and it felt like I’d escaped prison. Now, it’s just: Get in there, turn your hat around backward, hop on 200 pounds of meat to roll, and throw a party every day.”

There are a lot of ways to make a burger. I can make space, under certain circumstances, for goat cheese and spinach, or avocado and green salsa. I have grilled burgers with Cheddar and butter and even ice cubes in their centers. This, however, is not what’s on offer at Nick’s. What you get at Nick’s Old Fashion is an unapologetic, aggressively itself, never-frozen smashburger, always made to order. “White bag and wax paper,” Haynes says, though it’s often also a white cardboard box. Toppings-wise, you can get jalapeños or a fried egg or pimento cheese, and maybe you should, eventually, but don’t order that way the first time. Order a single, or maybe a double, if you’re hungry — these things are large, though not huge, save for the Intimidator, a five-patty monster that’s winking at local Childress Racing regulars. That first time, just get cheese, mustard, and ketchup. Maybe pickles. Go lowbrow. Simple. Grab a handful of napkins. Enjoy these things for what they are. So what if they’re not round? So what if they’re hanging off the edge of the bun? So what if you spill on your clean shirt? Nick’s, in its tiny space, snugged into a tiny strip mall sort of in the middle of nowhere, wants only that.

“It’s a special, special little place, man,” Haynes says of the restaurant with a kitchen so small, with so few square feet, that he has to turn over the entire inventory every day. “People will wait an hour and a half for a burger, which is just mind-blowing. I want it to be like you’ve walked into a time capsule, where we’re still doing it the way they would have done it in 1955. It’s pretty simple. There aren’t many ways to make it more efficient. We sell cheeseburgers, and we provide a haven for people to come escape the world.”

Escape, then: Nick’s is a two-elbows-on-the-table joint, and that table is covered with advertisements for local businesses. No beer. (“It’s not our style. We’re quick-turnaround,” Haynes says.) Order a Pepsi. Order a burger. There are other things on the menu, but that’s not what you drove here for. Not this first time. There are a lot of ways to make a smashburger wrong: patty too thick or too thin; too much bun, or not enough. There are zero mistakes here. A Nick’s burger is a straight-ahead thing of beauty. And here comes Jeremy Haynes, whom some folks still call Ralph. It’s OK. He lets them. Here he comes, all smiles. It’s your first time, but to him, you’re already a regular.

4 More on the Flat-Top: Craving a big, juicy hamburger or a classic smashburger griddled to perfection? These old-school joints serve up the opposite of fast food.