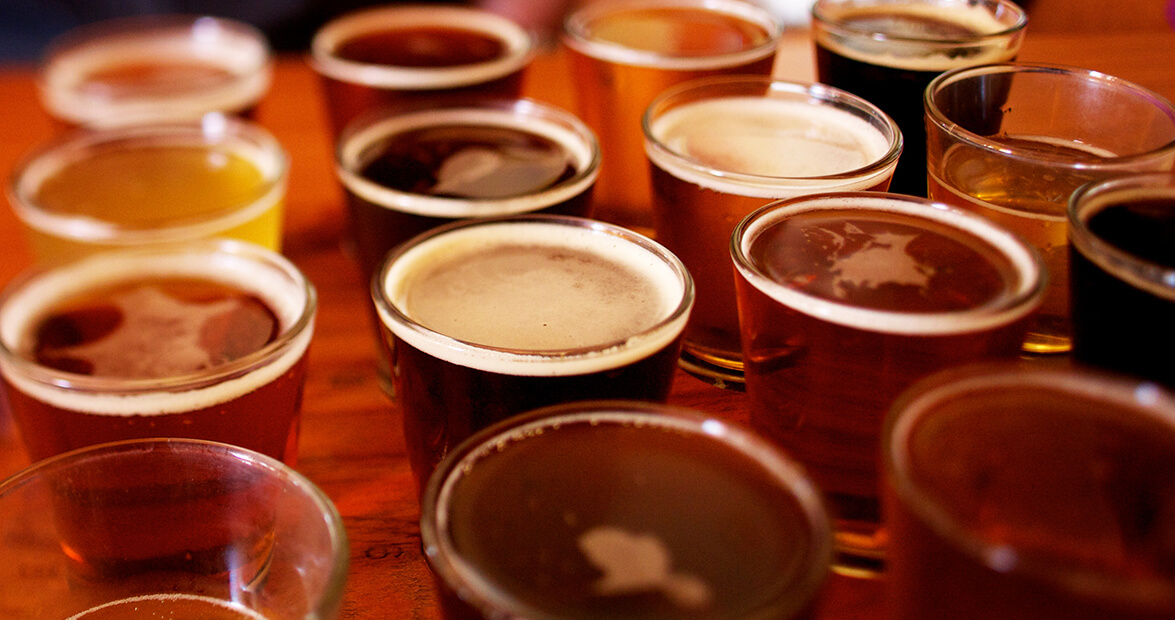 There’s never a bad time of the year to drink beer — but in North Carolina, summertime might just be the best. Our state’s notorious humidity has a way of demanding that cans be cracked, bottles be popped, and cold ones be consumed. Thankfully, North Carolina brewers are intensely aware of this fact; most breweries offer some sort of summer-centric beers that are made for cooling down.

Whether you’re looking for something light and familiar, or inventively refreshing, North Carolina has the perfect beer to help you beat the heat this August.

Summer Basil • Fullsteam Brewery, Durham
One sip of Fullsteam’s Summer Basil farmhouse ale and you’ll understand exactly why this beer has received the acclaim that it has. Fullsteam’s self-proclaimed mission is to celebrate “plow-to-pint” beer, and Summer Basil makes that clear — this is a beer that’s not afraid to put herbaceous notes in the forefront. The basil is pronounced, but doesn’t dominate the pale, carbonated, citrusy body. This is the ideal beer for pairing with light summertime dinners, like a caprese salad made with tomatoes from your local farmer’s market.

Nodajito • NoDa Brewing, Charlotte
Nodajito is a unique take on a Belgian Wit, a style usually associated with orange and coriander notes. Instead of those usual suspects, this beer leans heavily into lime and mint, while maintaining the refreshing haziness that makes Wits such a beloved summertime style. This is the beer for those who would rather be spending their summer on an island.

Sun Hands Summer Golden • Haw River Farmhouse Ales, Saxapahaw
At a monstrous 10% ABV, Sun Hands is a fresh interpretation of a Trappist ale that will beat your taste buds into submission and make them tell the rest of your body to chill out. The beer is more hop-forward than other beers of its style; dry-hopped with a mix of hops from America and the Southern Hemisphere, the beer is intensely floral while remaining as malty and complex as a well-made Belgian ale should be. Sun Hands is the same color as — and a fantastic excuse to go see — a Saxapahaw sunset.

Papa Bois • Mystery Brewing, Hillsborough
You might be wondering, what’s a stout doing on this list? It’s a fair question — the rich and chocolaty maltiness of stouts isn’t something many beer fans associate with the summer months. But try Papa Bois, a beer termed a “tropical stout” by its brewers, and you’ll immediately get it. Brewed with Lemondrop hops (in addition to lemongrass and fresh lemons), Papa Bois is visually dark, but tastes bright and refreshing. It’s a great beer for stout lovers who are tired of taking the summer months off from their favorite style.

Eat A Peach • Birdsong Brewing Company, Charlotte
Eat A Peach is a pale ale brewed with fresh yellow and white Carolina peaches. At its heart, the beer is a traditional pale ale — it’s less fruit-forward than other beers on this list. The sweet peachiness instead serves to balance the crisp but mellow hoppiness that comes from a mix of Columbus, Cascade, and Zythos hops. This is the perfect beer to sip on while gazing upon a freshly-mown lawn with pride.

Coolcumber • Wicked Weed Brewing Co., Asheville
Coolcumber could be described literally as a golden ale brewed with cucumbers, basil, and a surprisingly welcome addition of juniper berries — or it could be described figuratively as a testament to the idea that sometimes things work in practice better than they do on paper. Inspired by cocktails like a Cucumber Collins, Coolcumber is an incredibly refreshing way to take on the heat; it’s easy to get lost in the vegetable flavors and forget you’re drinking a beer. Intentionally or not, this is a beer made to be had as a treat after a run in 95-degree weather — after all, cucumbers are a natural source of electrolytes.

Strawberries & Cream Summer Ale • Bombshell Brewing, Holly Springs
If you’re reading this, chances are it’s been at least a few years since you’ve run barefoot from a pool to the siren song of the neighborhood ice cream truck. But Bombshell’s Strawberries & Cream — easily the most literally-named beer on this list — will conjure up memories of the best strawberry shortcake Popsicle of your childhood. This is a beer to be consumed poolside; you might be past the years of ice cream trucks, but you still deserve a treat.

Tropicalismo Pale Ale • Southern Pines Brewing Company, Southern Pines
Tropicalismo is a mystery — with each passing sip, you’ll taste a new fruit that you hadn’t realized was there. Notes of guava, mango, and passion fruit will present themselves in this incredibly smooth beer. There’s a light citrus kick from late-addition Mosaic, Simcoe, and Amarillo hops, but the previously-mentioned fruits are the real stars here. Did you forget to make fruit salad for your cookout? Grab a sixer of this instead.