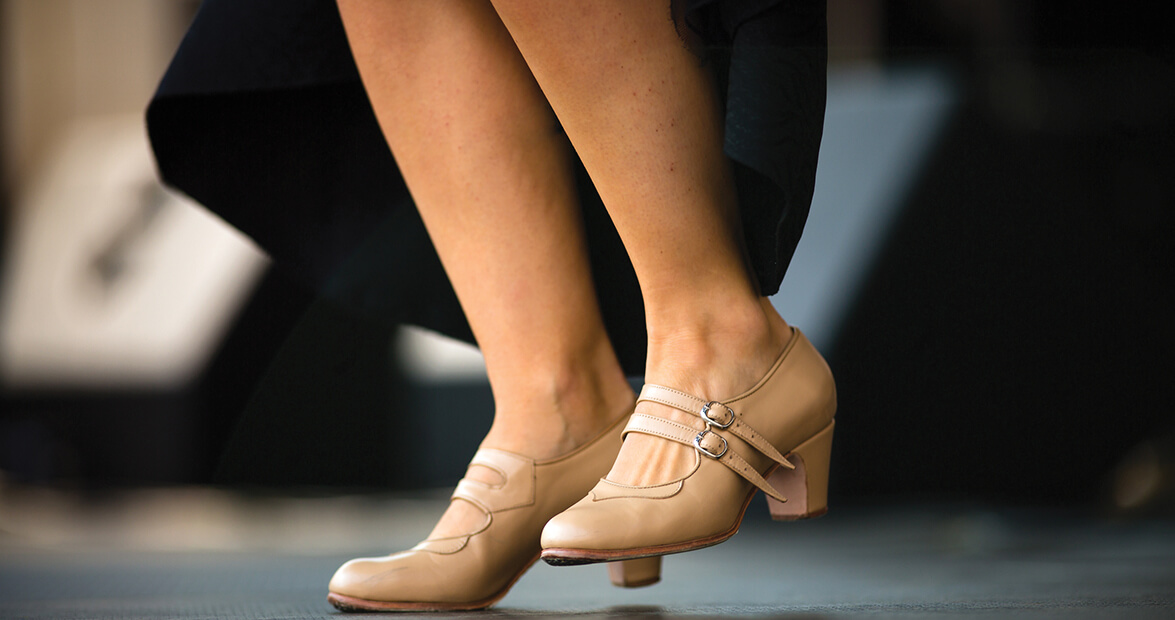 Just one word — shag — conjures an indelible scene: a wooden floor scuffed smooth; a jukebox spinning rhythm and blues; a room overflowing with laughter, flirting, and smooth dance moves; a special energy rolling through the place in waves. For those who loved it, they’ll never forget it, and if given a chance, they’re game to relive it. That’s what Fred Fletcher discovered when, recovering from cancer treatment, he happened upon the “I grew up in Raleigh NC” Facebook page, where folks were waxing nostalgic about a certain 1960s Raleigh shag club and beer joint called the Jolly Knave.

That was Fletcher’s club, a business he started in 1967 across the street from the NC State University campus, where he had recently been a student. Following his entrepreneurial spirit, the 23-year-old college junior dropped out of school, got married, and spent his every waking moment readying the Jolly Knave. When the doors opened, the dancers poured in, and the legendary stories began. Fletcher had access to thousands of records — the beachy R&B music that fueled the craze — and his superior jukebox gave diehard shaggers a place to meet up, learn from each other, and dance till closing time. “The Knave was its own culture,” he says. “We partied together. We cried together. We danced together. We hugged commodes together. You don’t do all that and forget those relationships.” 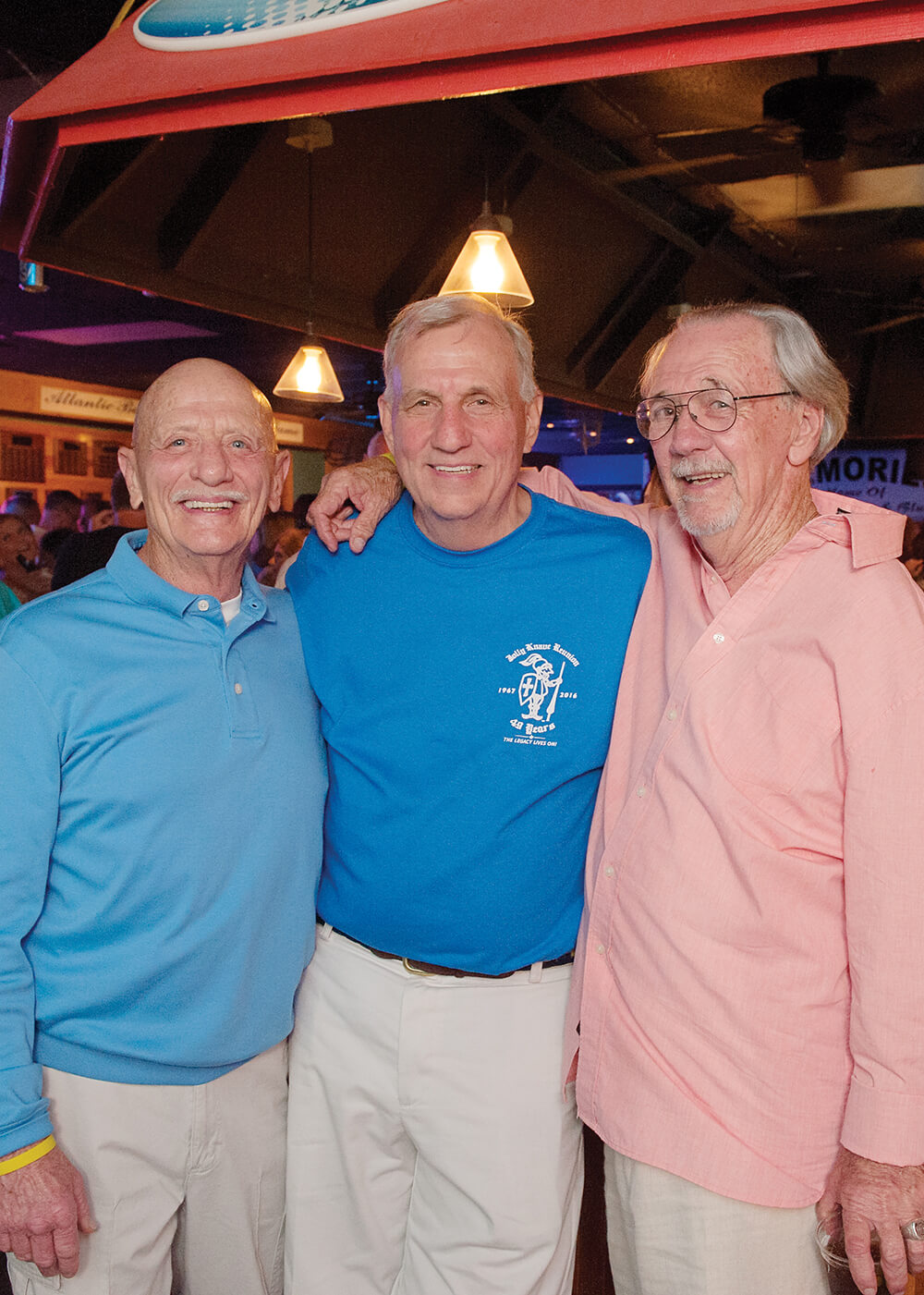 Still, he was surprised by the lasting affection for the Jolly Knave all these decades later. When someone on Facebook suggested a reunion, he replied: “If you’re serious, maybe we can do that.” Within two weeks they had an organizing committee, a mailing list, and 700 friends on a designated Facebook page. The first Knave reunion was held in 2010 at Raleigh’s Loafers Beach Club. Last year, Fletcher hosted a second get-together, this time in Atlantic Beach, where he had opened a Jolly Knave outpost on the causeway in 1971.

When Ann Poole, a regular at the Raleigh and Atlantic Beach Knaves, heard that Fletcher was hosting another reunion, she jumped at the chance to go. “There was a real closeness at the Jolly Knave,” says the 72-year-old, “and it came from the friendships that were formed there — and, of course, the love of beach music, the dance, and the jukebox.”

The original Jolly Knave in Raleigh was famous for its 26 steps — a granite one at the door and two sets of wooden steps that led up to the club, which occupied the second floor of a former rooming house. The building had unfinished hardwoods throughout, making it ideal for shagging. Fletcher tore out walls to create one large dance hall, with the fabled Jolly Knave jukebox against the front wall. A long wooden bar ran along a side wall, and there were rails throughout to lean against and set down a beer. Fletcher says his distributor told him that the Knave crowd consumed more beer — 26 kegs a week, on average — than any other club in Raleigh.

“The Knave had the best jukebox you’ve ever heard,” says Jeppy McDowell, who has been teaching shag dancing for 35 years at a beach club in North Myrtle Beach. McDowell got his start helping manage the Jolly Knave in Raleigh. “Fred would take this steamer trunk and load it up with old songs and bring it by the club. We’d put ’em on the jukebox, and a couple months later we’d switch ’em out again. We were the place that all the dancers went to shag.” But the dancing didn’t stop when the club closed for the night. Word would go out about where to head next, and impromptu dance parties would break out around the city. 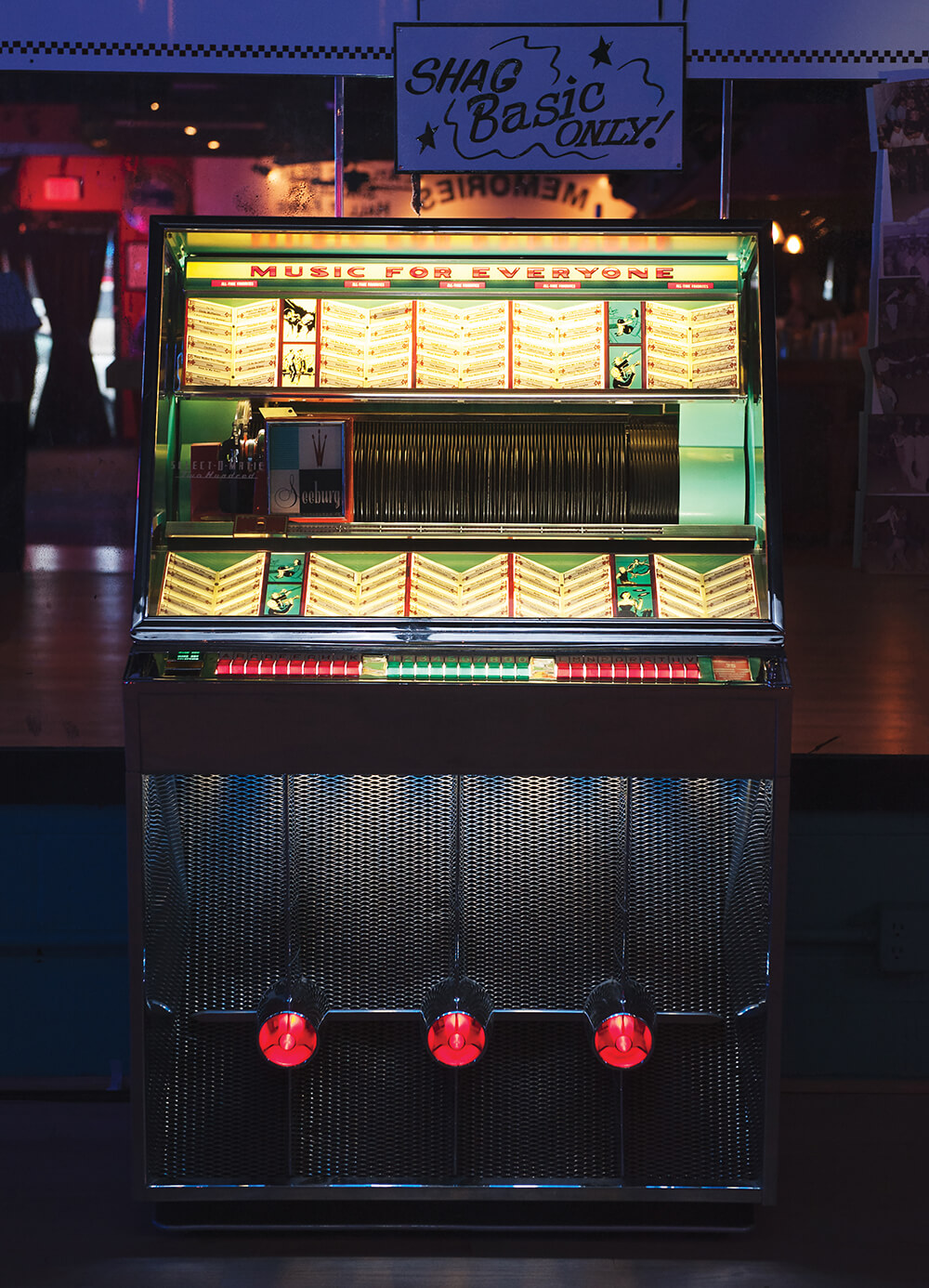 The jukebox at the Atlantic Beach shag reunion became a veritable time machine, taking folks back to late-night dance sessions by the sea. photograph by Courtney Fries

Johnny Bass started shagging in 1960 and was among the first customers to bound up the steps of the Raleigh Knave. It was his hangout of choice, and he regularly met up with friends from his hometown of Spring Hope, who were also attending college in Raleigh. “It was the place to be,” Bass says. “Most everybody knew everybody, and if you didn’t know the names, you knew the faces. It was a humongous part of my life, and is to this day.”

Bass attended this year’s homecoming at the original Jolly Knave building on the exact date of its opening 50 years earlier. The old Knave is now Mitch’s Tavern, but its owner was more than happy to turn the place over to 140 shaggers for the night. “I was blown away,” Fletcher says of the evening. “We moved the tables out and took over the dance floor, and it was just a great time.”

Sentimentality for the Jolly Knave runs so high in this group that original membership cards and T-shirts from the club are now treasured totems. Louis Alexander, another Raleigh Knave original, attended the first reunion in 2010 wearing a Jolly Knave T-shirt that “must have been 30, 35 years old,” he says. “I was offered a hundred dollars for that shirt. You can’t get that T-shirt for a thousand dollars.” He says that the intense loyalty to the club was created by the special camaraderie among patrons. “If somebody learned a new shag step,” he says, “then everybody had to know how to do it: Show me that again! Slow it down a little bit!”

For the Jolly Knave’s 49th anniversary reunion in May 2016, the venue moved to Memories Beach Club, near the site of the Atlantic Beach Jolly Knave (now the Crab’s Claw restaurant). When Fletcher closed the Raleigh Knave in 1971, he opened the Atlantic Beach Knave that same year, on the site of a burned-out beach hotel. Poole and her friends trekked to the two-story oceanfront club practically every weekend to shag. “They didn’t care if you came in your bathing suit or shorts or whatever you wanted to wear,” she says.

The 250 shaggers who showed up for the reunion danced to a playlist from notable shag DJs, who cranked up the tunes that folks couldn’t resist a half-century ago. It was the kind of crowd that knew what to do when a call came out for “The Continental Walk”; those who didn’t recall the particular steps to the hit by Hank Ballard and the Midnighters were instructed to “just do some fast dancin’. ”

For DJ Bill Harper, the evening brought back more than musical memories. He bought the Atlantic Beach Knave from Fletcher in 1978 and kept it going for two decades. “It was old-school. It was a beer joint. It was rustic. And it was hot,” he says. “People still talk about how hot that place was.” For the longest time, there was no air-conditioning; only ocean breezes wafting through the doorways stirred the air inside. Guys would show up in their starched Gant shirts and leave wringing wet.

Doug Perry, another regular at the Atlantic Beach Knave, and one of a group of shag-dancing legends that include Shad Alberty, Norfleet Jones, and Spider Kirkman, says that even though the original clubs are long gone, their spirit is alive and well at the reunions. “It’s not about a building that used to be there,” he says. “It was an attitude of the people to want to get together. Nowadays, people don’t even know who their neighbors are. But some of these people have known each other for 30, 40, or 50 years. This is keeping them together.”

The next shag reunion is November 3-4 at Loafers Beach Club in Raleigh.