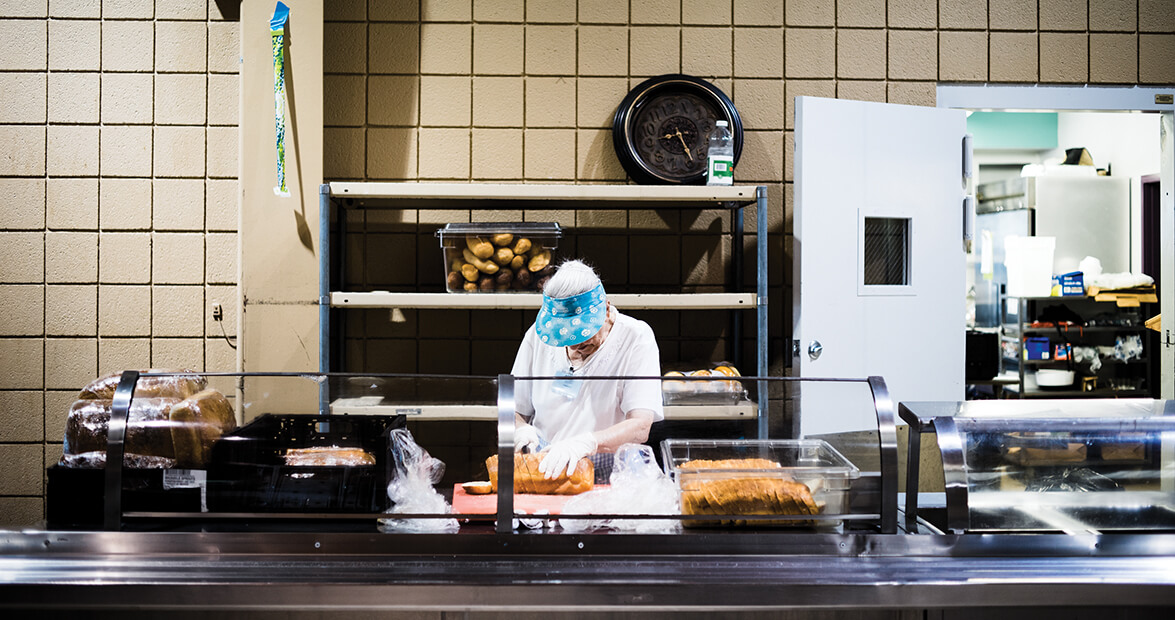 The line begins forming a good hour before the doors open at Urban Ministries of Durham (UMD), which has operated a shelter with a drug rehabilitation program, a food pantry and clothing closet, and their Community Café for more than 30 years.

Some patrons sit on nearby steps, in no great hurry to be among the first served a free meal. Others keep strict vigil for their place near the front, perhaps concerned about catching a bus, or making a punch-in deadline. Or maybe they’re the hungriest, though you could never tell by their appearances.

The crowd forming for UMD’s Community Café, or cafeteria, in no way resembles the way folks in a stereotypical free-meal line are often depicted. There are those who seem clearly gainfully employed, coming off a shift where scrubs are worn, or perhaps heading to a work site where steel-toe boots are required. For every threadbare tee and pair of stained pants, there is an equal number of belted slacks and button-down shirts. Patrons are of every color and every age, each with a unique set of circumstances that brought them to UMD. It makes no difference why they’re here to the staff and volunteers who have put together enough food to feed 250. No one will ask questions or make them justify their place in line.

This line is routine for some, a lifeline for many. It forms twice a day Monday through Friday, and three times a day on weekends, every day of the year, regardless of the weather, or if Christmas is on a Sunday, or if Patrice Nelson, UMD’s executive director, calls in sick. Every day for more than 30 years, UMD has served three square meals, in addition to the myriad of other food and social services it provides. Last fiscal year, they made more than a quarter-million meals, all on a food budget of just over $30,000. UMD’s operations are totally dependent on the careful network of volunteers cobbled together on a daily basis.

When the doors open, disabled individuals and families with children are waved to the front, a gesture that makes the meal less about poverty and hunger and more about community. For the hour or so that patrons spend breaking bread together, their circumstances seem to be left outside. Friends catch up. New friends are made. Others keep to themselves. Still, even for the ones who rush through their food and keep their heads down, the fact that a meal was just shared is irrevocable.

Here, it begins with a tray and a napkin-rolled bundle of plastic utensils. 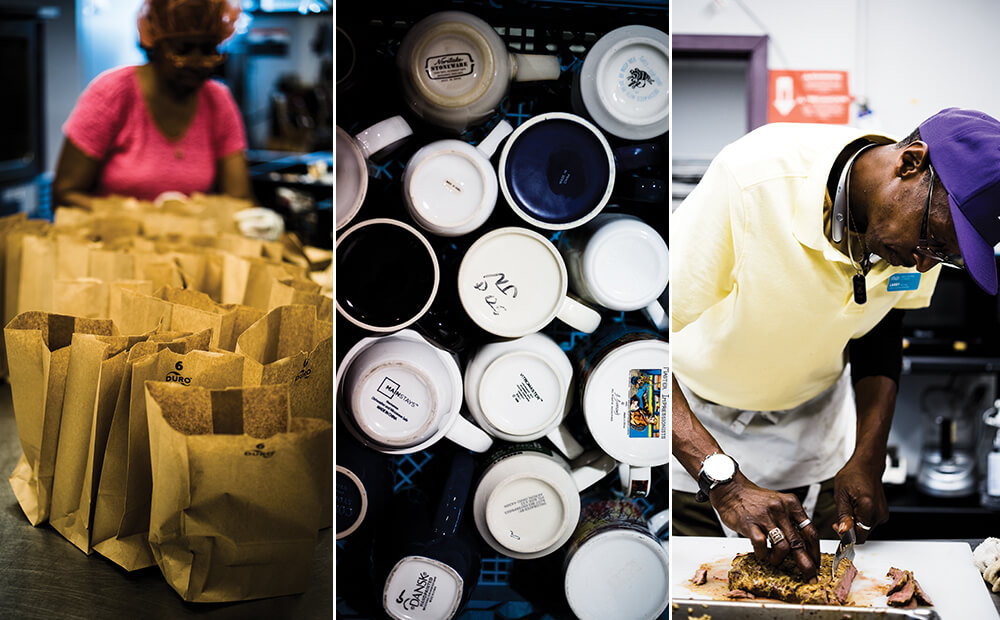 By the hundreds: Coffee, cookies, and bag lunches are prepared by Chef Larry Williams and residents. photograph by JOHNNY AUTRY

Chef Larry Williams, kitchen manager since 2009, wakes at 3 a.m. to get to work on time, arriving at UMD at 4:45 a.m. weekdays to prepare breakfast and ensure that 200-plus bagged lunches are ready for the taking. He has one assistant, Al Jones, but otherwise puts together these meals with the help of volunteers.

Williams is 6 feet 9 inches tall, a former Syracuse University basketball player and U.S. Marine. He does not mince words when it comes to holding protocol. Open-toe shoes? Come back when you have on the right footwear. Think you can grab one of 8,525-a-month bag lunches at 9:02 a.m.? Think again. He is polite but firm; his is a task requiring both practicality and creativity. One morning he might prepare 400 pancakes; another, he’s pillaging the fridge for last night’s leftovers. Fried chicken and cupcakes are often found at the breakfast table when items like eggs and ground meat, to make sausage, have run out.

He’s worked in kitchens off and on since he was a teen raised by his single mother in Newark, New Jersey. Working at UMD fills a part of him that’s deeper than anything he got out of flipping burgers or training line cooks.

Today is a good day. Volunteers fill trays with grits, a day-old pastry, an egg scrambled with last night’s veggies, and a sausage patty. Coffee, juice, and water are available at the end of the line. Danica Denison, a perky, blonde 24-year-old enrolled in UMD’s drug rehabilitation program, can only pick at her meal. A series of food allergies limits her to eating only the meat, picking over the eggs, and drinking coffee. When UMD helped her enroll for food stamps, her diet improved tremendously. In the weeks leading up to that point, she was hungry a lot.

Like all UMD residents, Denison works in the kitchen a few days a week, cleaning or perhaps rolling the thousands of utensil bundles needed. Tomorrow, she has an appointment to go over housing options once she graduates from the program. She gets excited when there’s fresh produce. Fresh fruits and vegetables were once a rarity at UMD, but the organization has been trying to serve more of them in the past year. “If it’s fruit, I love that,” Denison says.

The bread that Alma Shertzer, 81, slices each week at UMD is served at all three meals, but the majority of her efforts materialize in the form of the sandwiches placed in the bag lunches Monday through Friday. They accompany a drink, veggie sticks, a piece of fruit, and a dessert item, and are stacked on racks by the back entrance of the Community Café so that people can pick one up on their way out the door after breakfast. The packaged items are often purchased by UMD from the Food Bank of Central & Eastern North Carolina. In the heat of summer (and snow of winter), there’s an increased demand, since the children who would otherwise be fed at school are at home.

Shertzer began volunteering as a member of Durham Mennonite Church. She can’t recall, specifically, when she switched from preparing desserts to slicing the donated bread UMD receives from local stores, bakeries, and restaurants. It doesn’t seem as important to hang on to such details as it is to simply show up each week, as she has for more than 20 years. Shertzer arrives mid-morning every Thursday, staying as long as it takes. She looks as one might expect a Southern octogenarian named “Alma” would look: petite and properly put together, but with enough spunk to keep you on your toes. She eschews a hairnet for a faded, flowered, blue visor, and her “granny” glasses keep her gloved fingers from grazing the knife as she makes work of loaf after loaf. If you were to measure her slices, they would likely average a quarter-inch wide. If you didn’t know a human being had done the slicing, you’d swear a machine had. She is very much a small but essential cog in the complicated engine that is UMD.

Shertzer throws away the hardened, stale loaves, and in the summer, she keeps particular watch for mold. She does her handiwork behind the serving line at the Community Café, after breakfast has been served, and before dinner is prepared. Many of the 250 individuals who walk through that line each morning do not know of her work. But that’s ok with her.

“There are things that need to be done,” she says simply.

UMD’s motto is “Food, shelter and a future.” The bag lunches are particularly important for that last part. Not long ago, UMD decided that weekday lunches would be bagged, rather than served in the Community Café along with the rest of the meals. The staff at UMD realized that many patrons were loitering after breakfast, which ends at 9 a.m., to wait for the 11:30 a.m. hot lunch. The staff could facilitate the time clients needed to improve their situations — like attending job interviews or medical appointments — by handing out bag lunches, and so they do.

Word spreads quickly when something special is served for dinner at UMD. Patrons yell to those outside who are wondering if they should use their food stamps at the McDonald’s around the corner or wait in line. The dinner meal, served at 6:45 p.m., is prepared exclusively by volunteers ranging from church groups to businesses, Duke students to retirees who live nearby. Most nights, the meals consist of pasta or some other high-carb, uncomplicated dish that a group can easily prepare to feed more than 200 people.

Tonight is exceptional, thinks Deryl Scoggins, 53. The canned green beans, buttered rice, and barbecued chicken, with chocolate bars for dessert, provided by Bethany United Methodist Church in Durham, are tasty. It’s so special that, when some can’t finish their plates, they hesitate to throw them away, and instead offer their untouched chicken thighs to passersby.

Scoggins stayed at UMD in 2013 for its addiction recovery program. This time he stays as a “guest.” As a member of the crabbing industry in South Carolina, his job was eliminated this year due to serious crab shortages. A Durham native with family in Hillsborough, he made a deliberate decision to come back to the Triangle area because he knew UMD would offer the immediate support he needed by way of shelter, food, and clothing, as well as a plan to find gainful employment and affordable housing. His aging parents are on a fixed income, and he doesn’t want to become a longtime burden on his loved ones.

When asked where else he might have turned, he doesn’t know. “I’d be camping in the woods somewhere, I reckon.” When asked about nourishment, he says, “Right now, it’d be the only thing I’m eating.”

Even in a venue with free food, vegetables are left on the plates of the children, their mothers having encouraged them to try at least one bite. While some UMD residents have cleanup duty at the end of dinner, most of the diners have no reason to stay on-site once their last bite is swallowed, their trays returned to the opening into the kitchen where the dishwashing begins.

This is the moment the spell is broken.

Unlike a traditional household, the end of dinner doesn’t mark a time to tuck into a sofa with a good book, or figure out which show to watch on television. These souls scatter to the wind, some back to houses, others to a tent in the woods. What makes this bearable to witness is knowing that tomorrow, the breakfast line will begin to form around 7 a.m., and UMD will do it all over again.