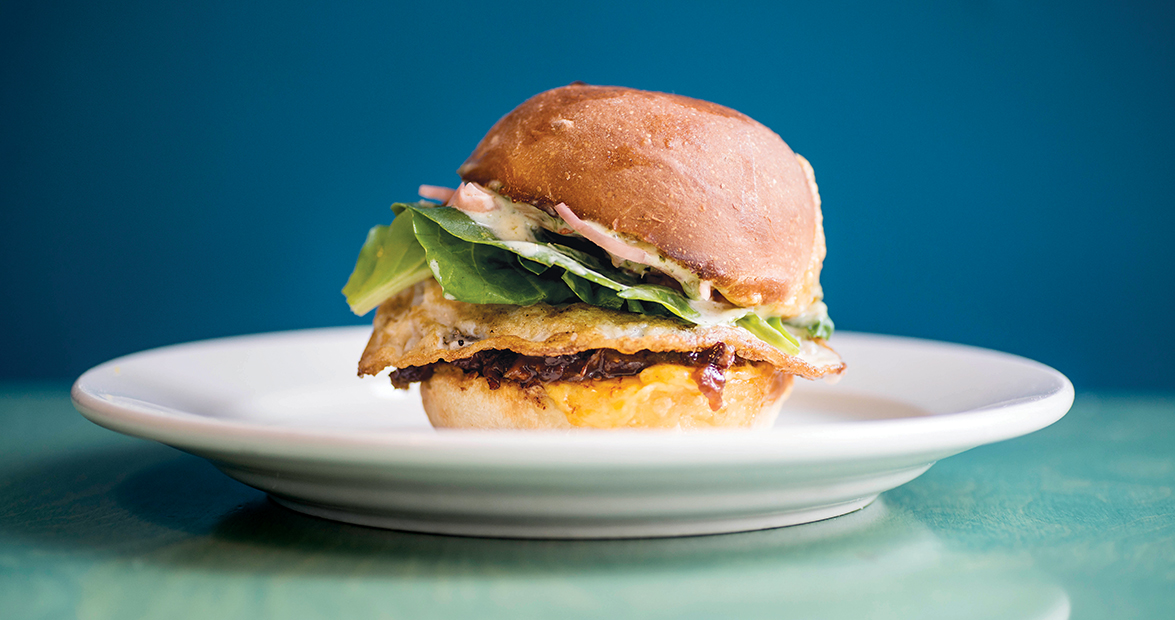 At Yamazushi, you enter a gentle world completely created by chef and owner George Yamazawa, from the carefully crafted food to the plates and bowls it’s served in. He’s the only one in the kitchen, and his wife, Mayumi, is the server. He grows many of the vegetables in his own garden. Yamazushi offers traditional kaiseki dining as George learned it in Japan, an elegant series of delicately crafted dishes, served timed to each diner’s individual rhythm. Mayumi watches the tables — are diners talking and having fun, or are they quietly enjoying being together? That affects when she asks George for the next courses. She’s even been known to ask guests if the soft classical background music is too loud.

Japanese screen-like paper covers the windows, so you can forget you’re in a shopping center beside a bar and a dog groomer. Slippers are at the door to protect the beautiful wood floors.

He and his wife want to give all of their attention to the customers, George says, which is why the restaurant seats a maximum of six. Reservations are required; no walk-ins. There is no menu. Call to reserve a table and Mayumi will ask about any dietary restrictions, but you won’t know what’s coming until it arrives at the table. Vegetarian meals aren’t available, but seafood-only is an option. You’ll marvel at such jewels as chestnut rice with Japanese pickles, thinly sliced scallops fried with a crunchy rice cracker coating, or soft-shell crab with green tea salt. But you get more than a meal.

“We would like people to live the moment: the person who is with you now, or the thing that is happening right now,” Mayumi says.

For decades, George cooked what he thought other people would like, or what others told him to cook. He did the showman thing at a Kanki in Raleigh, flashing knives and flinging bits of vegetables in the air. When he opened Yamazushi in 1986, it was a sushi bar. That was what customers wanted in Japanese food then, and he and Mayumi had two children to support.

In 2002, George was diagnosed with leukemia. He beat it, and beat the cancers that returned two more times, including one that left him temporarily unable to taste food — a humbling experience for a chef. George doesn’t talk much — he prefers to let his cooking speak for him — but says that his hardships made him realize that it was time to do what his heart desired. He changed the restaurant’s format and removed the sushi bar. After seeing a documentary about a renowned Japanese chef and potter, he apprenticed himself to a Seagrove potter to learn to make his own serving dishes.

You can feel his emotions in every course that arrives at the table.

“I am very happy being able to wake up in the morning. I’m up at six in the morning every day, doing yard work in the garden or doing prayers,” George says. “I appreciate being a chef and the ingredients so much more.” 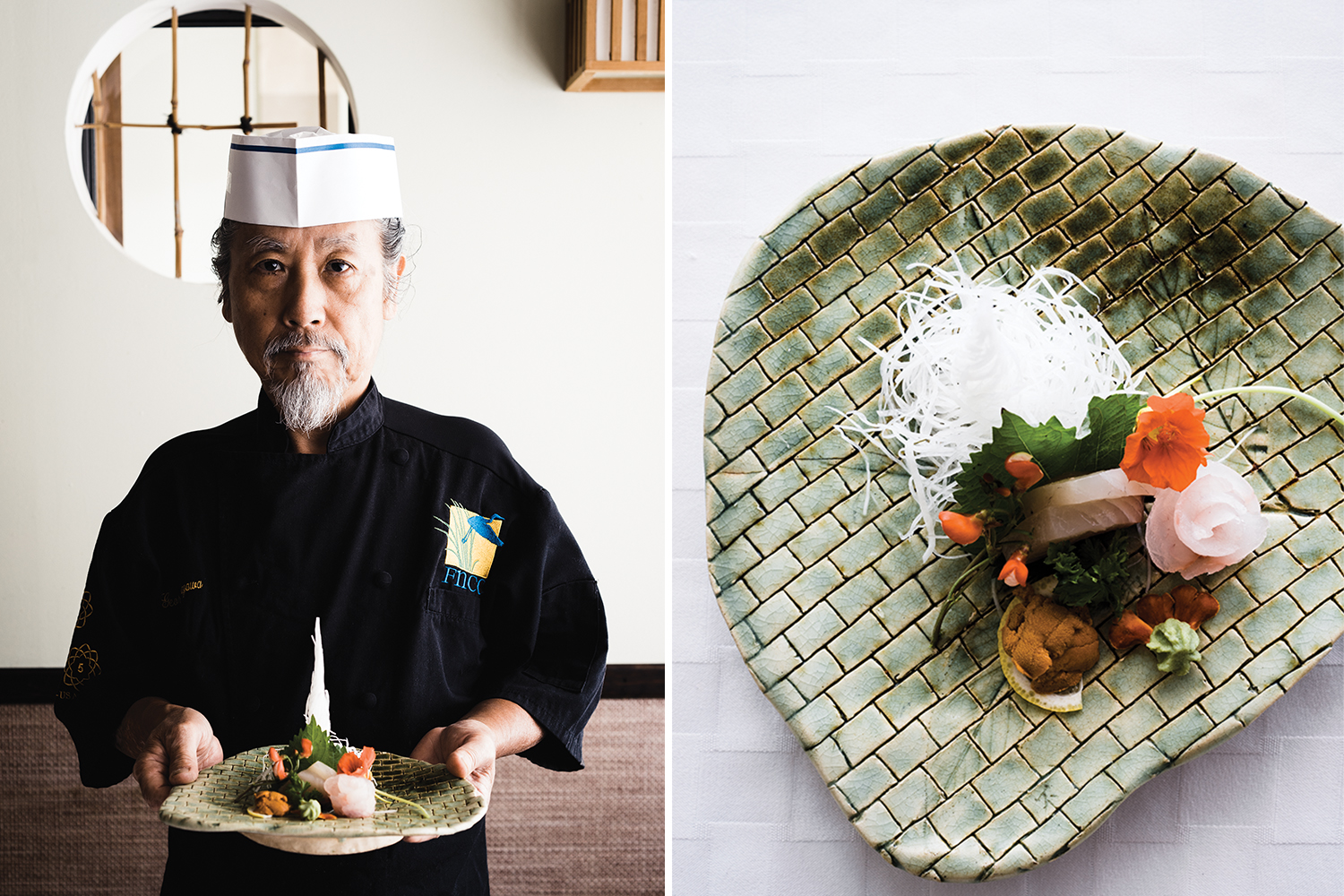 Today, downtown Durham is packed with more than 75 restaurants and bars, enabling you to spend a day on a glorious grazing spree. If, for example, you take baked goods as your theme, you can hit Loaf bakery (bread), Scratch Seasonal Artisan Baking (famous for pies), or The Cupcake Bar (cocktail-inspired cupcakes). Or, a random forage can take you to Spain (Mateo Bar de tapas), Japan (Dashi), or local fields (Piedmont). Most of the spots are locally owned and run by locally-trained chefs. Many downtown spots, such as The Parlour ice cream shop, started as food trucks. Cocoa Cinnamon coffee shop began by delivering coffee via bicycle to downtown businesses. Loaf and Scratch originally sold their goods at farmers markets. Triangle Food Tour began offering walking tours and tastings at Durham restaurants in 2009. “You see these young people who gravitated here with an entrepreneurial spirit and love of food. It’s great,” owner Leigh Eckle says.

At [ONE] Restaurant in Chapel Hill, executive chefs Kim Floresca and Daniel Ryan operate in a completely open kitchen, with diners on three sides and storage along the back. Like a stage under the spotlights, the layout is the dominant feature of the 113-seat restaurant, which includes ringside dining at a bar at the edge. “It’s dinner and a show,” Floresca says. The restaurant itself has a very urban feel, with unadorned lines and a lot of black and gray, making it look more like SoHo than the Southern Part of Heaven. The noise of a full house offers cover for the crash of any dropped crockery in the kitchen, as do the exhaust fans, Ryan says. Diners notice for a minute, then go on. It’s just a part of the show.

The Irregardless Café is known for a lot of things. In 1975, it opened smack in the middle of a state capital that ran on red meat and pork, but was strictly vegetarian and — a word rarely heard back then — vegan. It came back after a 1994 fire with reimagined menus (including meat and seafood), but with the same commitment to fresh, healthful cooking.

One thing on the menu inspires widespread obsession: lemon tahini salad dressing made with a creamy mixture of tamari, lemon juice, tahini (sesame paste), oil, and some vegetables, whirled in a blender. It has been on the menu since chef and owner Arthur Gordon opened the restaurant, and is by far the most popular dressing there. If you get hooked on it, like thousands of others, you can purchase bottles at the restaurant. 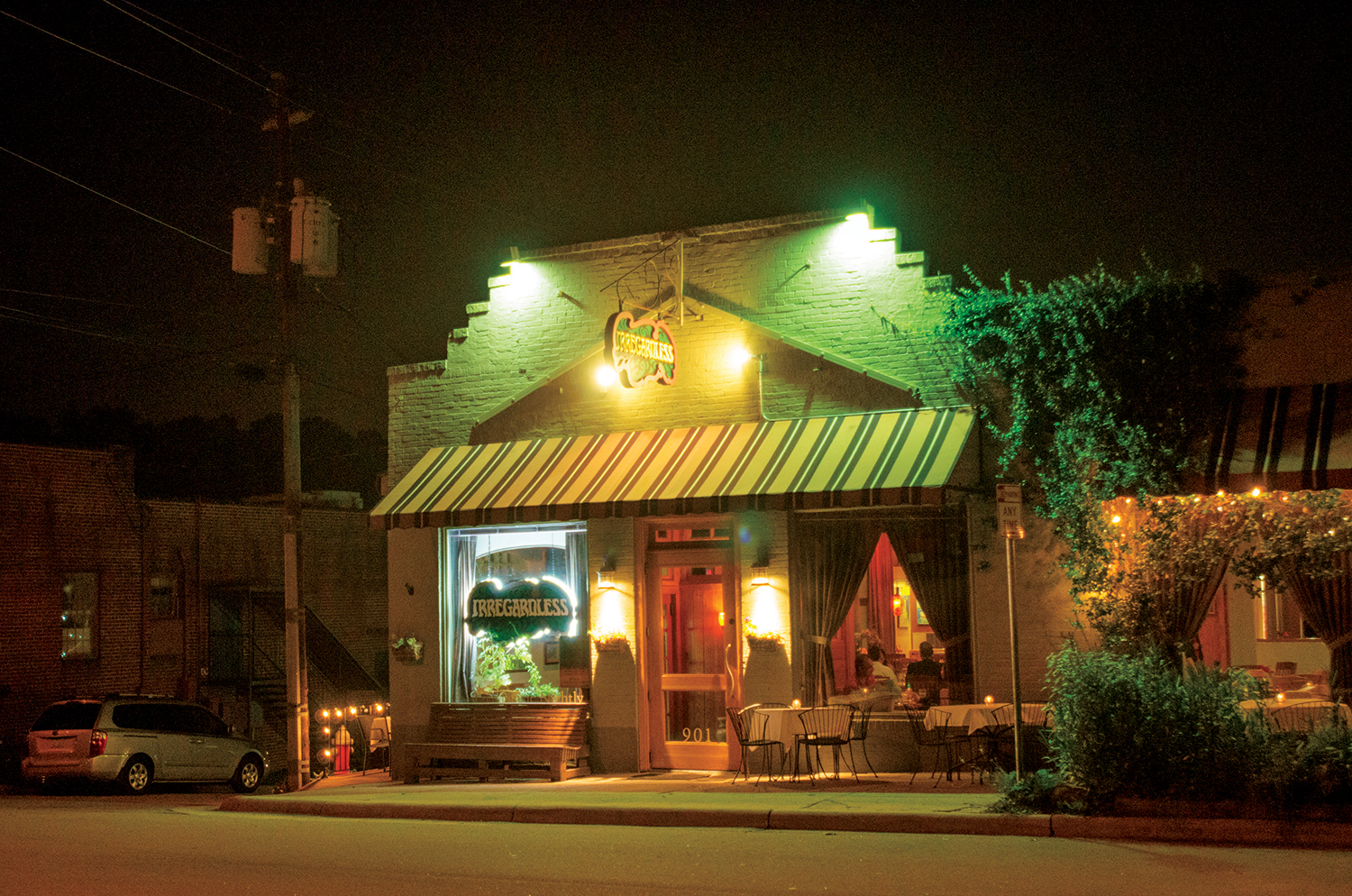 The unforgettable part of Boylan Bridge Brewpub is
the best view of the growing downtown Raleigh skyline that you can get while sipping a cold one legally in a public place. The attached small building — which few ever sit in -— was built in 1949 as an office. The brewpub and its popular patio opened in 2009. If you get tired of admiring the view, turn around and watch the colorful crowd of beer drinkers, neighborhood families, and dogs that pack the place. And on a summer day, if you’re lucky, you might see Kudzu Jesus, an arrangement of the pesky vines growing in the shape of a robed man with outstretched arms near the railroad tracks below.

This 64-year-old hangout, Players’ Retreat, isn’t like an average sports bar. There are 54 types of Scotch, and more than 100 wines, a list that has earned the vinyl-boothed, Formica-tabled restaurant and bar Wine Spectator awards four years in a row. You could have a $100 bottle of red with your Wolfpack Burger (topped with slaw, mustard, and chili). On Friday and Saturday nights, the chef offers seasonal fine-dining entrées using local ingredients, such as honey Sriracha shrimp with black bean puree, corn cake, corn salsa, and cilantro crema. “We wanted people to see it’s still the PR,” says owner Gus Gusler, referring to the place’s old nickname, “but you don’t have to just eat fried food here.”

Chatham Square doesn’t look like much as you drive by. The beige brick strip of buildings is lower than the road, with brown sheet metal signs and few windows. But it’s a good place to fill your stomach. Start with empanadas stuffed with spicy chicken at a taqueria, then move on to smoky Korean barbecue, and pick up an electric blue soft drink at a Japanese market. Try butter tea at a Tibetan restaurant, which is different from the Nepalese restaurant next door.

There are three biryani restaurants within walking distance, including one that offers a goat version of the Indian rice dish. An African market is a few doors away from a spot that offers halal meats. Just step around the corner if you’re looking for a sushi place. Don’t forget to try the sautéed pea tips with garlic at Super Wok, which is packed with Chinese families and cordially welcomes all.

Chef Ashley Christensen, who in 2014 was named the best chef in the Southeast by the James Beard Foundation, keeps branching out. Chuck’s serves burgers, Beasley’s Chicken + Honey slings chicken Southern and fried, and Fox Liquor Bar is in the basement. If you’re not sure which one to choose, at least you won’t have to drive around; all three are in the same building at the corner of East Martin and South Wilmington streets. 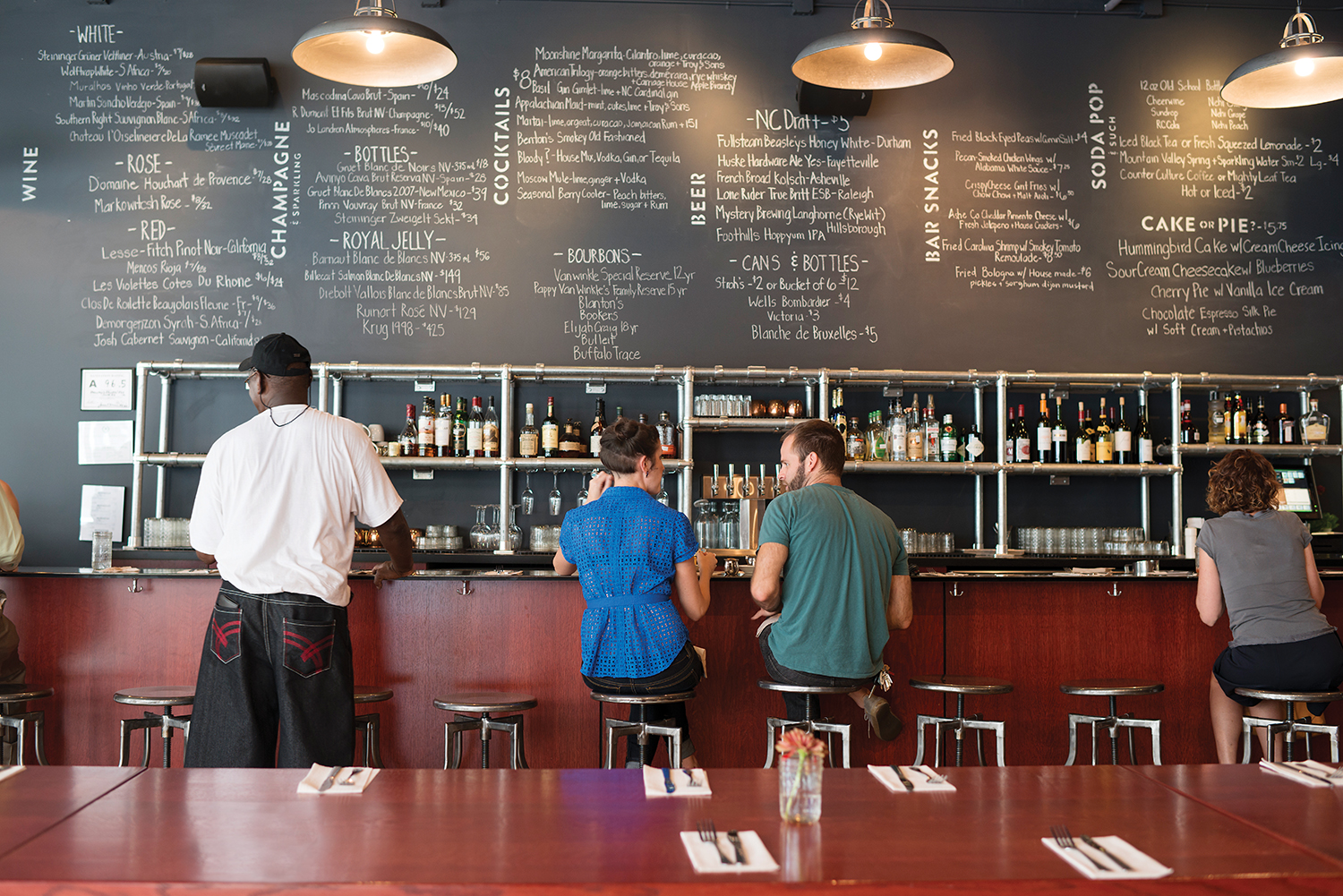 First it was a pie shop, in 1945. Then it was a 1950s luncheonette. When Christensen opened her first restaurant at Poole’s Downtown Diner, she knew its history would inspire everything — and that the S-shaped vintage bar that snakes throughout the space would remain the same. When naming her latest project, Death & Taxes, she was equally inspired by the building, once home to a funeral home and a bank. The food, however, is inspired by far warmer tones: her ode to cooking with wood and flame.