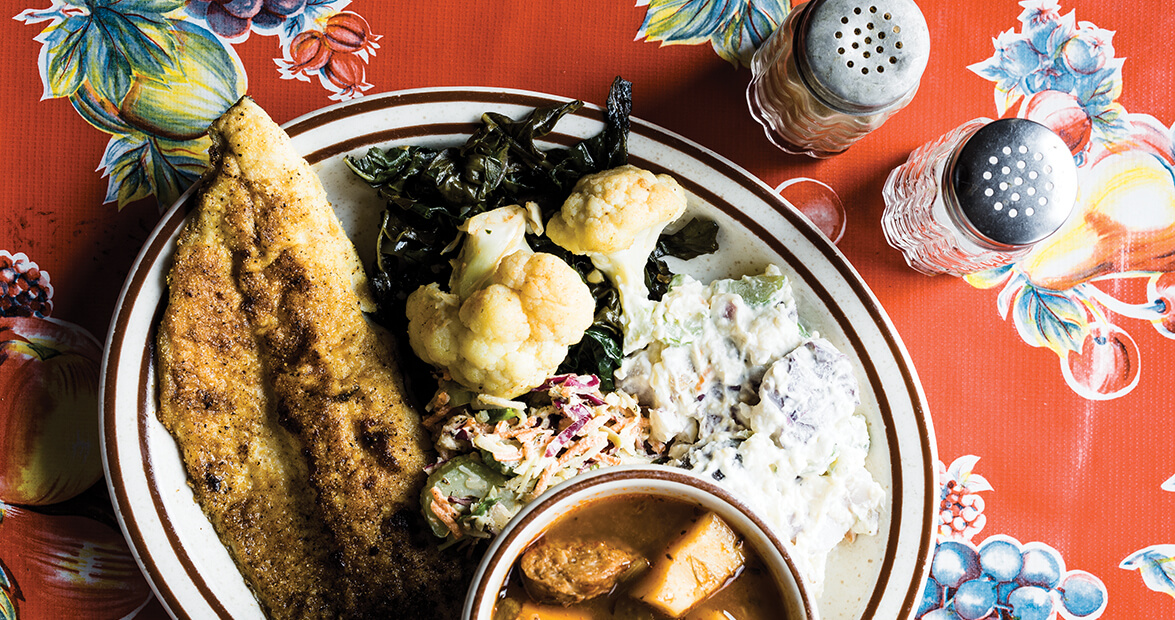 We think a lot about the “thanks” part of Thanksgiving.

But giving is a part of the holiday’s DNA, too — the simple act of making and sharing food, the way we give of ourselves when we share food together.

So let’s step into a place where the giving is what the thanks are all about: F.A.R.M. Café, a small restaurant in the heart of downtown Boone.

F.A.R.M. stands for “Feeding All Regardless of Means,” and in just a few years, it’s become what volunteer coordinator Tommy Brown calls “a part of the warp and web of this community.”

First, let’s get clear on what F.A.R.M. isn’t. It’s a self-supporting nonprofit, not a charity. Oh, they provide food for the hungry, all right. Street musicians, homeless people, folks living on the gnawing edge of food insecurity. But they feed other people, too. Professors from nearby Appalachian State University (ASU), tourists pausing between knickknack shops, regulars who come by for a good meal that just happens to come with a side of good works.

Executive Chef Renee Boughman is emphatic about that. “We’re not a soup kitchen,” she says. “We are a restaurant that’s open to all. Truly open to all.”

F.A.R.M.’s mission is to provide high-quality, mostly locally sourced food that’s worth paying for. And maybe paying a little extra for: When you pay your $8 or $10 for lunch — soup, salad, entrée, sides, and dessert — you can kick in a few extra bucks to defray the cost of someone else’s lunch. Or, if you can’t afford lunch, you can volunteer for an hour and get your lunch for free or at a reduced price.

It also helps to break down barriers. The new mission of many food charities is to get away from the old model of charity: I give; you stand over there and receive. That doesn’t build relationships, and it keeps people who need help in a position of feeling helpless and hopeless.

Roddy, 29, comes to F.A.R.M. almost every day, working for an hour to set up tables or take out the trash before he grabs a glass of iced tea and sits at the counter. Roddy spends many of his nights at Hospitality House, the local homeless shelter, and his days on the streets of Boone. “I walk around all the time,” he says. “Here, I can sit down and eat a meal. It’s incredible. I live on as little as I can. I really appreciate this place. … This stuff is all healthy.”

In food charity, there’s a growing concern about how we feed the poor. Most food banks are stocked with cheap, processed food — high in salt, fat, and sugar, and low in nutrition. F.A.R.M. represents a new way of thinking, of doing good with food that really is good.

“Everybody deserves to get good food and not feel like it fell off a truck,” Boughman says.

‘No menu, no prices’

The idea started with Boughman, Shelly Wilson, and Andy Long (now the chef at Mast Farm Inn). The three knew each other from High Country United Church of Christ, where Wilson was pastor; they were part of a group of citizens who were concerned about food insecurity in the area. Like many tourist towns, Boone can be an expensive place to live, with a lot of part-time jobs that don’t provide benefits.

Boughman and Long started casting around for an idea. Someone gave them an article about One World Café in Utah, a restaurant with a policy of “no menu, no prices,” where people pay what they want or what they can.

“Andy and I thought, ‘That’s the stupidest thing — a formula for failure,’” Boughman says. But then they thought about it — volunteer labor, a single meal a day, a way to buy and use food that keeps money in the local economy. It started to make sense.

Boughman knew from the beginning that the quality of the food was the key. In order to survive, 80 to 85 percent of F.A.R.M.’s customers have to be willing to pay full price so that F.A.R.M. can provide free or reduced-cost lunches to the rest.

“If we don’t have food that can compete, it won’t work,” Boughman says. “[Paying customers] will come occasionally to support a good cause, but not regularly, unless the food is good.”

Boughman had cooked at high-end places, including Westglow Spa and The Best Cellar in Blowing Rock. So she knows how to cook, and how to get creative. Since some of their food comes from F.A.R.M.’s own garden, The Garden Spot in Valle Crucis, and from High Country Community Supported Agriculture, Boughman never knows what she’s going to get. 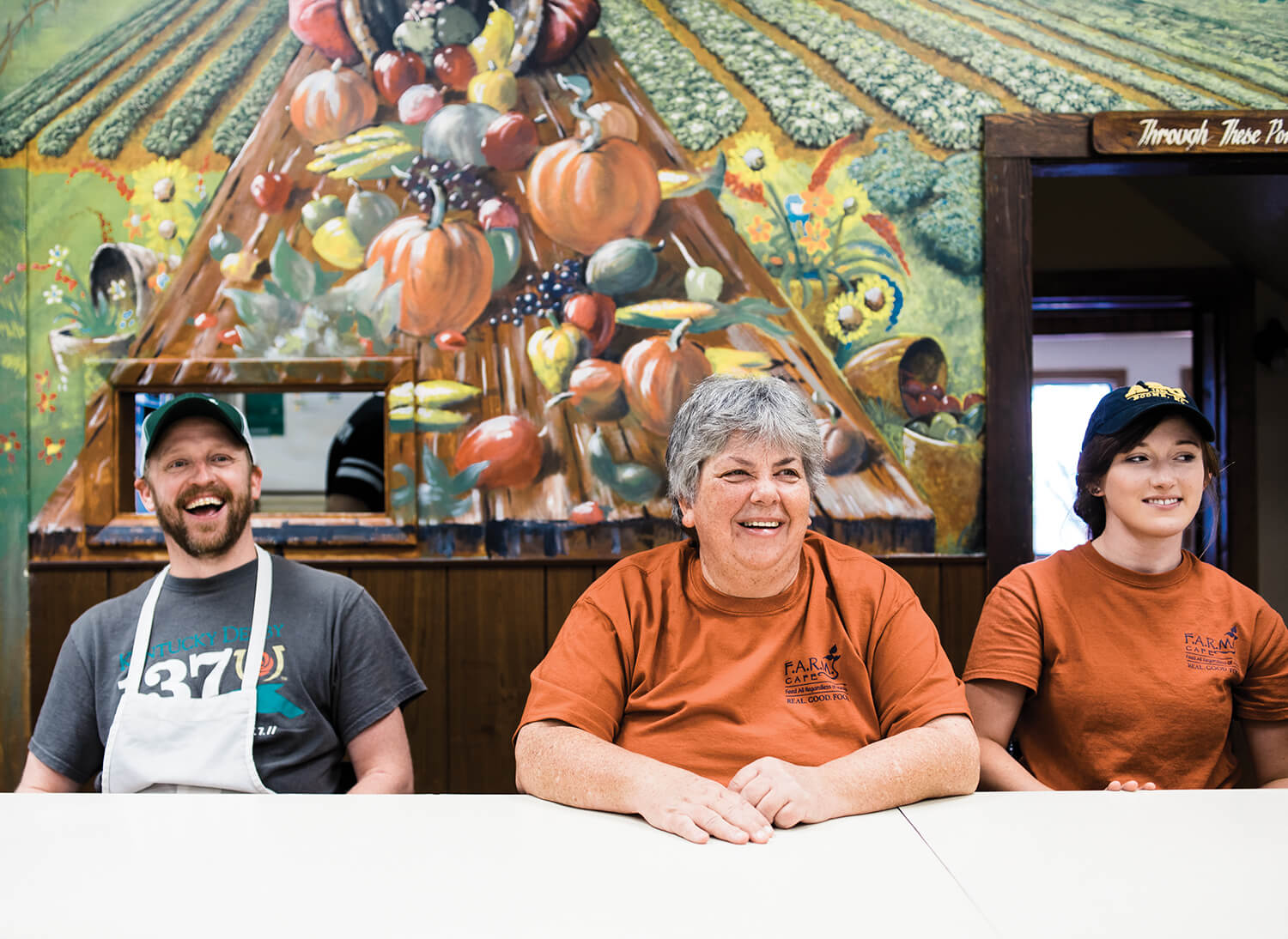 The heart of downtown

In its heyday, Brown says, Boone Drug Co. was where “town and gown” would meet. F.A.R.M. kept the drugstore’s snaking Formica counter, with nameplates that used to mark the seats of the regulars, and the yellow booths. Above the counter, there’s still a model train track in front of cardboard cutouts of town landmarks.

Bill Pelto, the dean of Hayes School of Music at ASU, comes in for lunch at least once a week. Why?

“Food’s great,” he says. “Start there. I feel like I vote every time I’m in here. I vote for a cause I believe in, which is taking care of people. It’s a cross section of town. It’s slightly counterculture, but in a good way.”

Sure, there are people, usually tourists, who walk in, take a look — and walk back out. “People will say, ‘Oh, I don’t eat at a soup kitchen.’ That’s the work we do,” Tommy Brown says, shrugging.

To him, the important part isn’t the food; it’s giving people a chance to be active in what they get to eat.

Soup kitchens have their place, he says. “But we’ve also got to find ways to do things differently.”