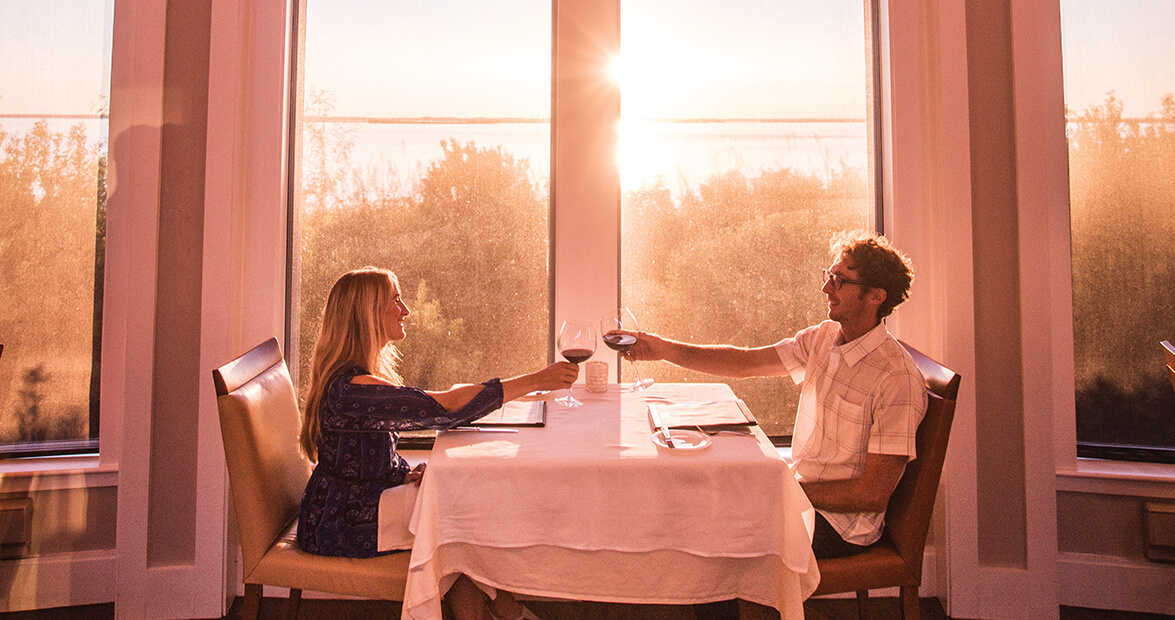 “Seaside steakhouse chic” sums up Kimball’s Kitchen in just three words. Maybe “seafood steak sunset” is better. Or “Make reservations today.” However you describe it, Kimball’s Kitchen, at The Sanderling Resort in Duck, is elegant from the instant you walk through the door to the sad moment you put down your dessert spoon. The food — steak, local seafood, and a decadent selection of raw oysters — is good enough to bring you back, but the sound view will keep you talking about your meal here. One wall of the dining room is curved, a sweeping set of floor-to-ceiling windows that bring the Currituck Sound tableside. You’ll find that the pace of your meal slows a bit as sunset comes on. The glint and gleam of light on water draws diners’ attention, and conversations acquire a reverent hush. It creeps into the open kitchen as chef and line cooks alike steal glimpses, and servers take a long, restorative look before the room resumes its pre-show pace.

Part of the new breed of upscale, clean eating (think: less fry, more healthy) Outer Banks dining, AQUA uses its soundside location to its advantage in the dining room and upstairs in the spa. In both rooms, the sunset views are almost too good to Instagram. AQUA’s menu is loaded with line-caught fish and crabs from right out back, but it’s the way the food, wine, and spa options come together to make a decadent lunch-massage-wine-dinner day. Though if you’re pressed for time, order a glass of wine, a pair of appetizers, and soak up the salt air and blue skies over the Currituck Sound.

When you live on the shore, you draw your livelihood and daily sustenance from the sea. At Basnight’s Lone Cedar Café, you can see how two families — one old-blood Outer Banks, the other osprey — do just that. For generations, the Basnights have been a fishing family, but now they spend more time cooking than catching, introducing countless diners to the bounty of their waters. From the Osprey Lounge, the bar at Lone Cedar Café, you can watch a new family — a mating pair of ospreys named Lucy and Ricky — bring in a fresh catch to feed their young while you wait for your fresh catch to arrive at the table.

Sam & Omie’s got its start as an early-morning eatery and after-work hangout for commercial fishermen, and after more than 70 years of yarns, tales, and outright lies, not much has changed. Now it’s the grandchildren of the fishermen telling stories over cups of coffee and ice-cold beer, and like their granddads, they’re happy to fill your ear with Outer Banks lore while you fill your belly with a fried fish sandwich.

You’d like The Colington Café to be a secret known only to you and a select few, but the word is out on this Kill Devil Hills restaurant. The menu, packed with fish like mahi, grouper, or tuna fresh off the boat in Wanchese, and produce from the Inner Banks, is an eye-opening take on Outer Banks seafood, often combining incredible ingredients with French-inspired methods. But it’s the atmosphere that separates The Colington Café from other seaside eateries. Servers know their menu, the wine list complements it, and the cozy rooms of this former home add a welcome intimacy to your dining experience.

Chef Keith Rhodes has been both an NC James Beard Award semifinalist and a Top Chef contestant. And he built quite a name for his Wilmington restaurant, Catch, by transforming an ordinary storefront into one of the best restaurants in the state. Everything at Catch says seafood, from the name to the décor — the walls are a pleasant ocean blue, the floor reminiscent of sand, coastal artwork on the walls — to the menu, where Rhodes creates bold seafood dishes that are long on flavor. You’ll often see him in the dining room, checking on customers and providing a personal touch you don’t see in many chefs, much less those of his caliber.

Where most Asian food tends to be Chinese, Thai, or sushi, Saigon Bistro brings Vietnamese — with a French twist — to the table. At this downtown Wilmington eatery, you’ll find the chef is meticulous with his dishes, preparing every item on the plate to order, and never relying on anyone else to make his food. While a number of fusion dishes appear on the menu, the mainstays are Vietnamese through and through. Chef Kiet grew up cooking with his mother, grandmother, and aunts, and has ever-so-subtly adapted their recipes to the American palate. The cuisine, like the flavors therein, is unexpected along North Carolina’s coast, but a loyal core of diners is spreading the word about this gem.

You’ll find the best raw oysters in all of Wilmington at Brasserie du Soleil. Expertly shucked, they’re full of liquor and so flavorful as to be unbelievable. The mignonette sauce, if it’s possible for mignonette to be sublime, is just that. Order an assortment of oysters, with some from here and others from there, to taste the subtle differences each region has to offer. When it’s busy, the dining room is a whirlwind of servers and conversation, and the kitchen prepares plate upon plate of dishes that draw on Chef Engel’s French-rooted but far-reaching palate, as well as his passion for the local bounty. 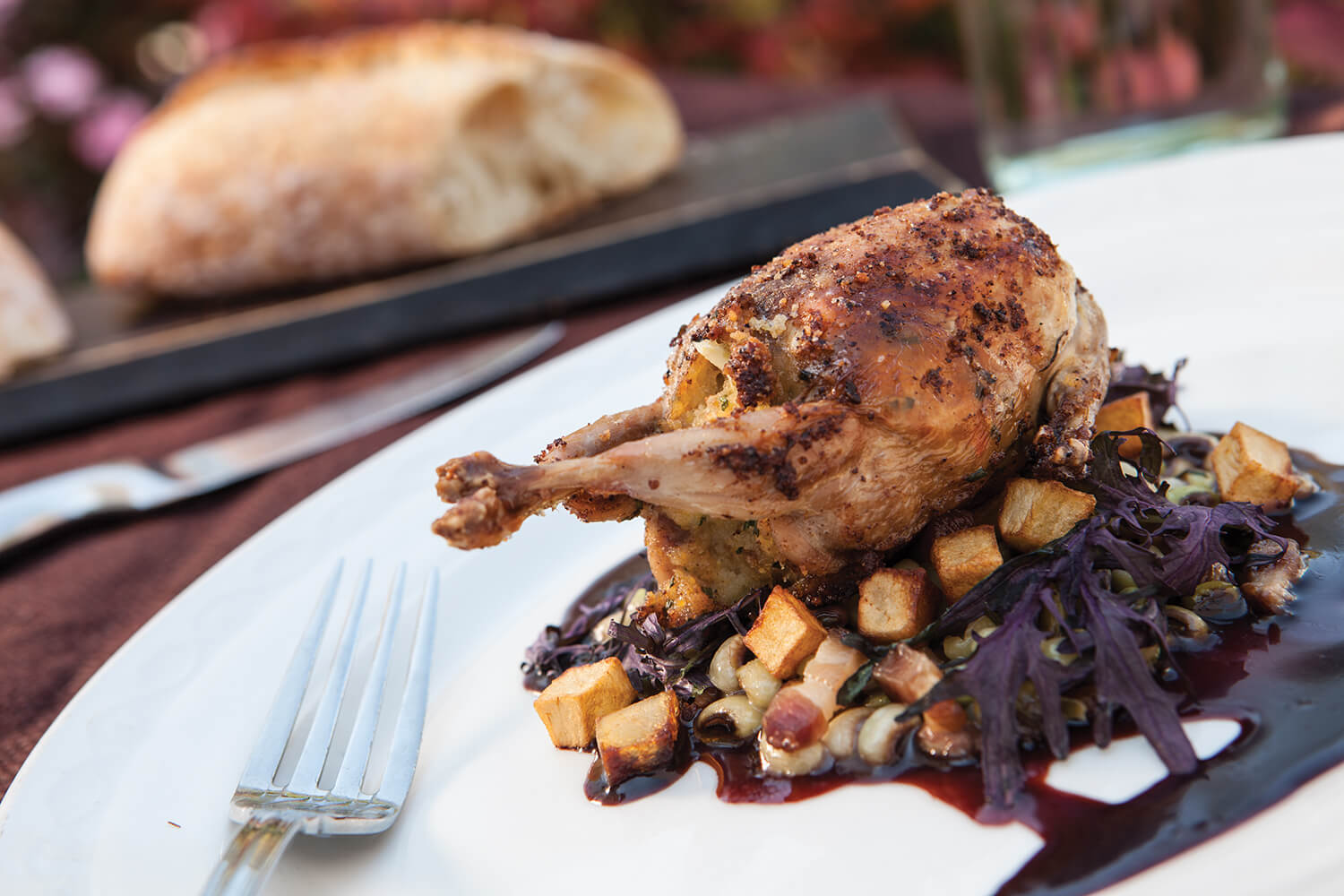 Along the coast, much of the seafood you’ll encounter is of the fried variety, but at The Bento Box, Chef Lee Grossman showcases fish in its purest, most unadulterated form. Take a front-row seat at the sushi bar and watch him create plate after plate of seafood perfection. One question — What’s fresh? — will guide your order, and soon you’ll be dining on delicate slices of yellowfin tuna from the Outer Banks or paper-thin slices of wahoo caught just a few miles away. The Catch of the Day Tempura Roll — lightly-fried seafood rolled with avocado and lettuce, and wrapped in a paprika soy sheet — will never disappoint. 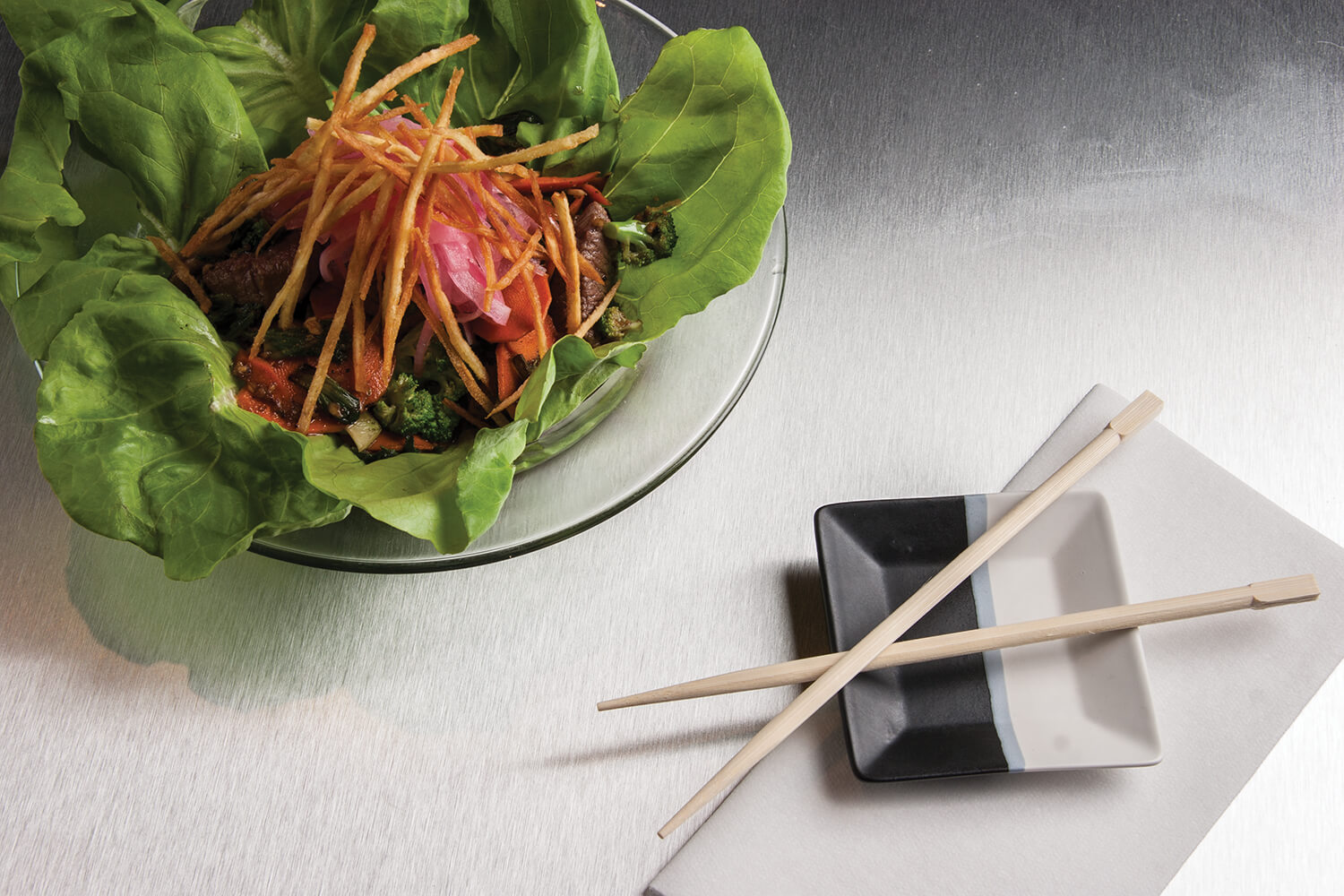 Regarded as one of the top restaurants along the Crystal Coast because of their seasonal approach to local flavors, Aqua Restaurant in Beaufort is — well, was — a close-kept secret. Their menu consists of small plates, big plates, and tapas, with every dish drawing on the flavors, ingredients, and traditions of the area. Add to that a selection of vegetarian and vegan, gluten- and dairy-free dishes, and you have a place where everyone can eat. Whether you order tapas to share or a couple of small plates, take your meal on the porch and eat it with a glass or bottle from their thoughtful wine list.

One of the best wine lists in the area complements one of the best dinner menus on the Crystal Coast at Beaufort Grocery Company. The menu draws on cuisines the world over with dishes like Ahi Tuna Napoleon with wasabi coleslaw, and the New York Strip Bulgogi, a Korean dish that uses ingredients sourced right here at home. Locals love Beaufort Grocery, and visitors in the know flock here, so make a reservation before you set off for a meal.

How does a fish market make the list of must-visit North Carolina restaurants? Because the seafood is perfection. Because the owners treat you like old friends. Because when you ask a fisherman in Hatteras where to eat, Harbor House Seafood Market is the first place they mention. Sure, you can take the fresh catch back to your house and cook it yourself, but Vicki (or husband Robert, or son Graham) will give you the pointers you need to fashion a spectacular meal. And they should know, as they’ve been specializing in Outer Banks seafood for a lifetime. Grab something just off the boat, take one of their oven-ready dishes, or, if you’re hungry now, pick up a pair of crab cakes or some shrimp and crab enchiladas and eat your meal al fresco.

A plate of food at Spoon River is a work of art. Which is fitting, as the chef treats ingredients as a sculptor treats clay. The menu changes on a whim (OK, it changes daily, or weekly, depending on what’s inspiring) and every iteration of every dish draws a new element from the ingredients. In the market side of Spoon River, you can pick up a bottle of wine for dinner. If you’re having trouble deciding between  bottles, just ask, and the staff — sometimes even the chef — will be there to help you make your selection based on the night’s menu.

The name says it all: a Southern delicacy and waterfront dining. Overlooking the Neuse River in one of North Carolina’s oldest and most charming towns, Persimmons gives you the chance to put the world on pause and savor the moment. On the menu, you’ll find dishes that are borderline decadent. Crispy pork belly and the rich crab cake come to mind. Others — such as the burger or mahi-mahi — are like the river: simple on the surface, but deep when you get into them.

When a restaurant is owned by two outstanding sommeliers, expect excellence. On The Square delivers just that, not only on its wine list and menu, but also in atmosphere and vibe. It’s not the kind of dining you expect to find in a small town like Tarboro. But take a bite of sophisticated dishes — and often daily specials, as the menu changes weekly — like pulled-duck risotto, their spin on North Carolina rainbow trout, or something as simple as a panzanella salad. You’ll understand why this restaurant has a loyal following.

Italian-inspired coastal cuisine in one of the oldest homes in the area? Yes, please. Pescara Wood Oven Kitchen is a lovely spot for a meal. In this carefully restored cedar shake house, you’ll find pizza cooked in a showy wood oven and Italian seafood specialties prepared with ingredients bought directly from local fishermen. Dine on calamari or a bowl of spaghetti with charred octopus and clams in the former living room, or take your glass of wine and charcuterie to the porch, where the salt air adds a little something to each bite.

A no-bones-about-it seafood joint, Southport’s Yacht Basin Provision Company — just the Provision Company if you’ve been there before, “Pro Co” if you’re a local — takes you back to a simpler time in coastal cuisine. Steamed shrimp, crab cakes, and fish sandwiches dominate the menu, but that makes it easy to order. “THEE” Special — a half pound of steamed shrimp, a crab cake, and cucumber salad — is a great intro to what Pro Co can do. Once you order, don’t take a number. A server will wander out into the waterside dining room carrying a tray so overloaded with food that you wonder how they hold it, and yell your name. Then you get to eat. If you can tear your eyes away from the pile of shrimp in front of you, the boats cruising by on the Intracoastal Waterway will keep you equally occupied.