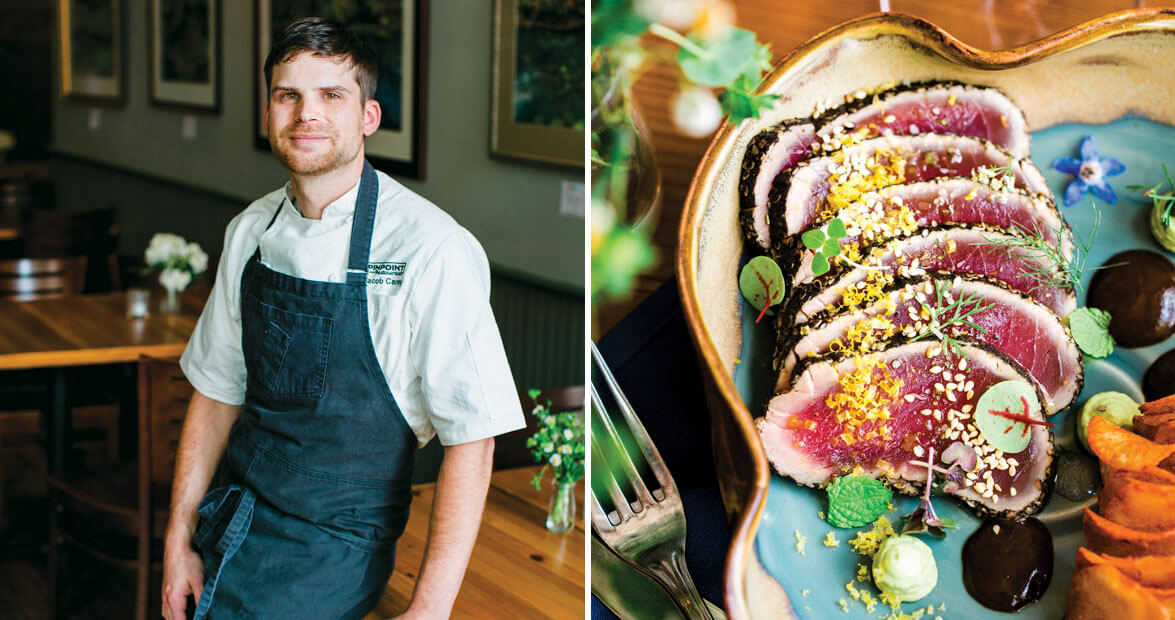 Editor’s Note: This story was published in August 2019.

Think of spearfishing like fly-fishing. It’s a deceptively labor-intensive way to catch a fish, requiring special equipment, practiced skill, and darn good aim. There are easier ways to get the job done, of course, but a spear-fisher, like a fly-fisher, will attest to the purity of their sport and the superior tastiness of their catch. The latter claim, at least where a speared fish is concerned, has some truth to it, says Jacob Carey, the new chef at PinPoint, a downtown Wilmington hot spot within strolling distance of the Cape Fear riverfront. “The quality of the fish, the flavor, it’s just so much better because the fish didn’t suffocate on a boat,” he says. “It’s killed instantly, and that affects the meat.”

Carey stocks his menu, which changes daily, with as many speared fish as he can get his hands on. They’re hauled back to land by local divers, who fin down to the reefs, ledges, and shipwrecks beyond the port city to pick off prized grouper, triggerfish, and more. When they see spiny lobsters (the Maine lobster’s warm-water relation) ambling along the seafloor, they pluck those up, too, and bring them to Carey. He broils the tails or stuffs the sweet meat into homemade ravioli or stirs the tender chunks into sherry-enriched chowder.

Sometimes he gets an octopus, a bonus. Onto the menu it goes, keeping company with the oysters — Dukes from Topsail Sound and Masonboro Salts — and smoked clams. While North Carolina turf is represented — in the heritage-breed pork chops, rib eye steaks, and fried chicken — PinPoint’s fish dishes have earned the restaurant steady praise since it opened in 2015. The original chef, Dean Neff, created a foodie blockbuster with his signature brined, smoked, and fried North Carolina catfish, served over grits — so beloved that it was featured on Food Network’s The Best Thing I Ever Ate in 2018.

The subtle ebb and flow of coastal seasons became second nature to Carey.

The regulars might mutiny if the catfish disappeared from the menu. Same with the butter bean hummus. But otherwise, Carey has brought his own sensibility to the kitchen, where he worked under Neff for three years cooking the dishes that earned PinPoint a perch atop annual best-of lists. In February, Neff sold his stake in the restaurant to co-owner Jeff Duckworth, with whom he had launched the casual fine-dining restaurant in a historic brick storefront. Now, with Carey at the helm, Duckworth says, “We’re building on what Dean did: local produce, farmers, and fish. Comfort food, creative and elevated.” 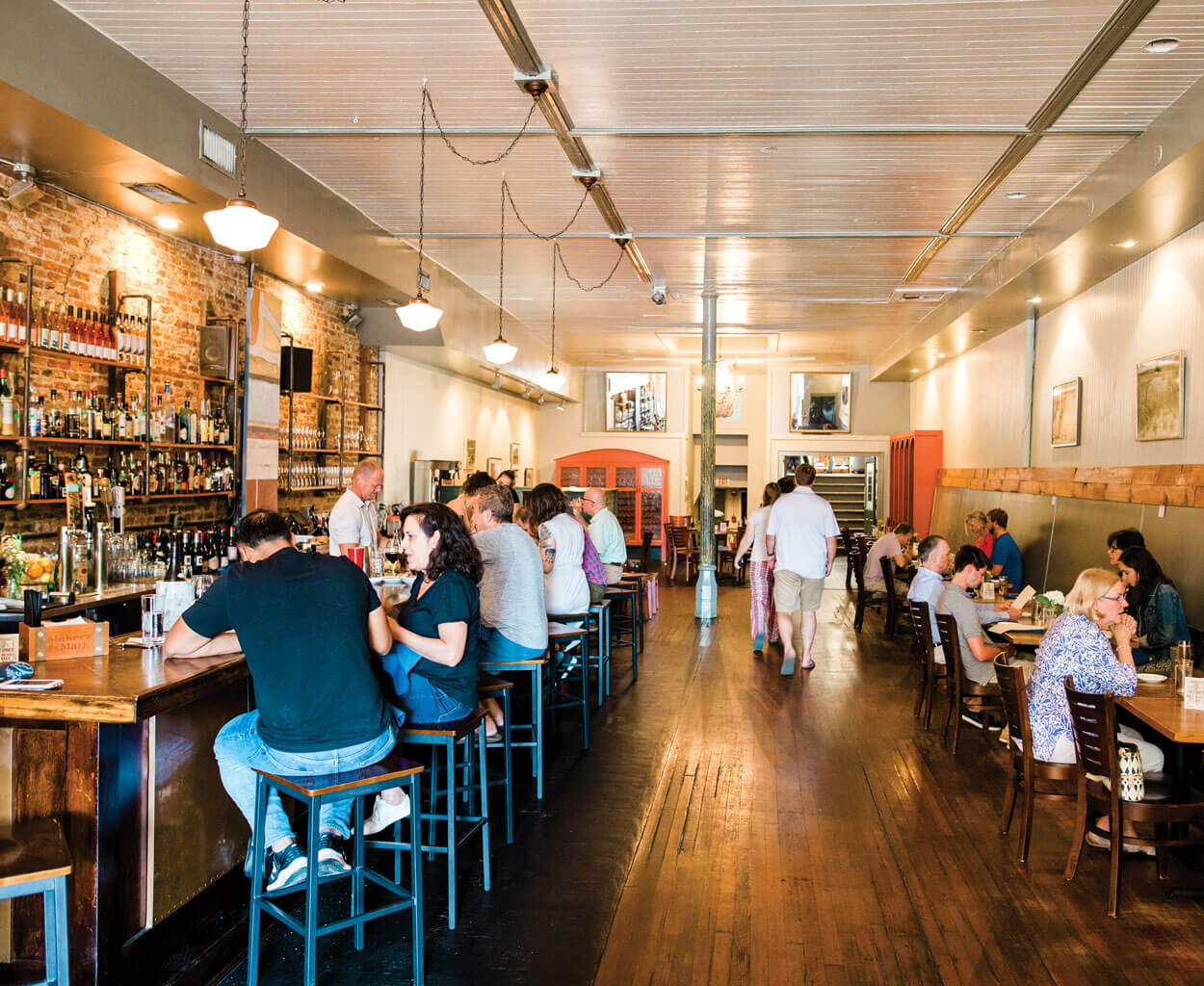 The 1880s building housed a longtime favorite restaurant, Deluxe. The owners like that it holds special memories for Wilmington diners. photograph by Matt Ray Photography

Carey counts Neff as a mentor and inspiration, but adds that it’s nice to “wake up in the middle of the night and write down new ideas” for what he’ll create the next day. Duckworth says that his new chef’s deep North Carolina roots will shape the restaurant’s menu. “Jake brings all this knowledge of North Carolina food and relationships,” he says. “You never know what’s gonna come through the door.”

“Yesterday, I got 15 spiny lobsters,” Carey says with a chuckle of disbelief. After he poached some and pasta-ed some, using the Italian and French techniques he learned on his way up the culinary ladder, his instincts as a native North Carolinian took over. “I made this corn dog,” he says, like only someone who spent his childhood toggling between Swansboro and Burlington can. “A local shrimp and lobster corn dog. It was good.” 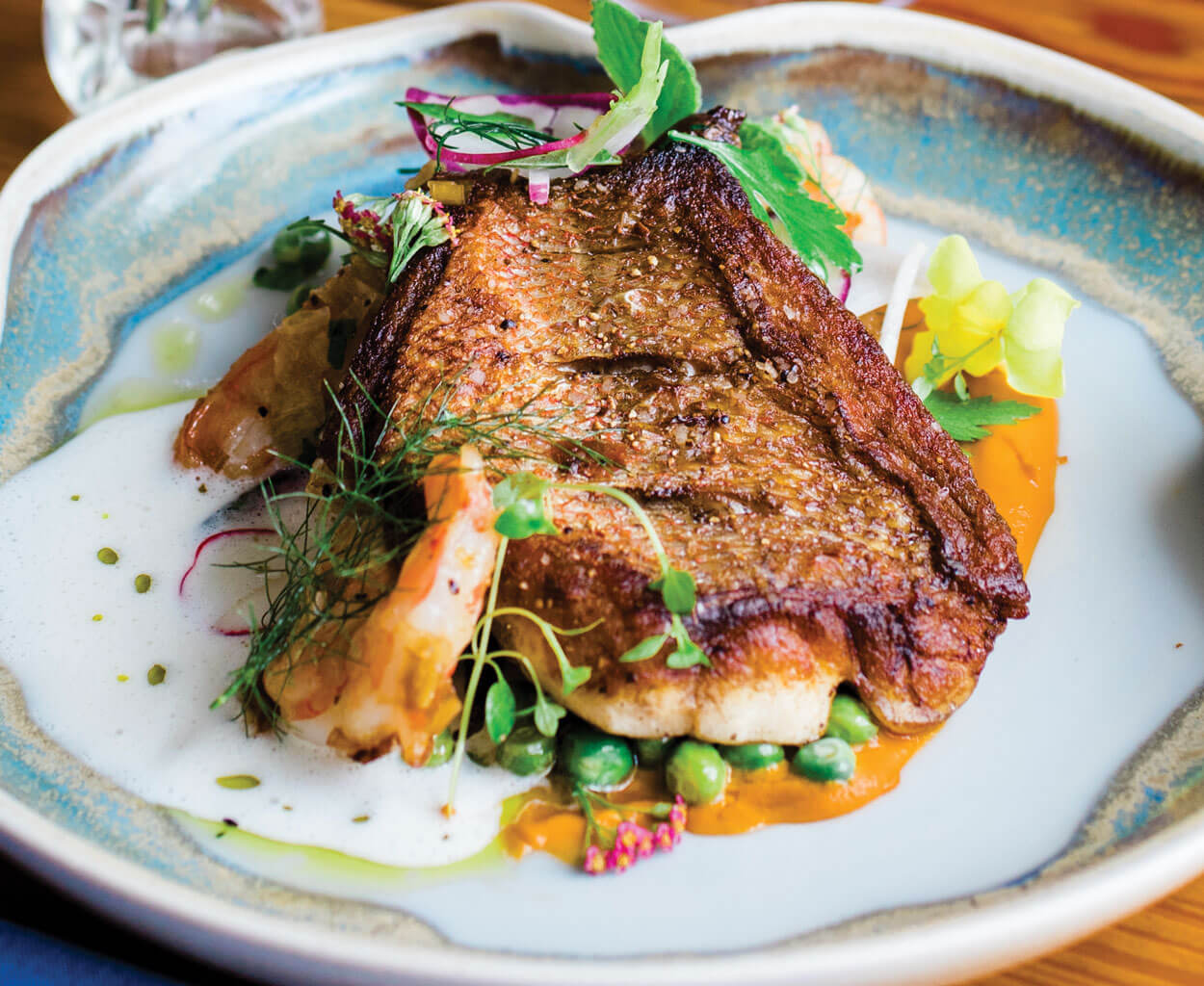 Growing up, Carey learned to pull crab traps and fish from the waters around his grandfather’s Swansboro property, where he spent summers. “He taught me everything — clamming, oystering, fishing. Eighty percent of his life was spent on the water,” Carey says. On land, his grandfather, a retired Army colonel, also tended persimmon trees, muscadine and scuppernong vines, and tomatoes. As the years passed, the subtle ebb and flow of the coastal seasons became second nature to Carey.

That native familiarity with local ingredients inspires the way the vegetables and garnishes — primarily sourced from two organic farms in nearby Ivanhoe — are transformed on the plate. Braised, roasted, pickled, and smoked, crops are made to shine during their peak season. Sharp and savory flavors — radishes and ramp sea salt, briny feta and pickled onion — brighten the richest dishes. There’s a lovely balance to everything in this easygoing, shotgun space where meals are special enough to linger in memory. Ambitious and down-to-earth, it’s the sweet spot where the best of land meets sea.