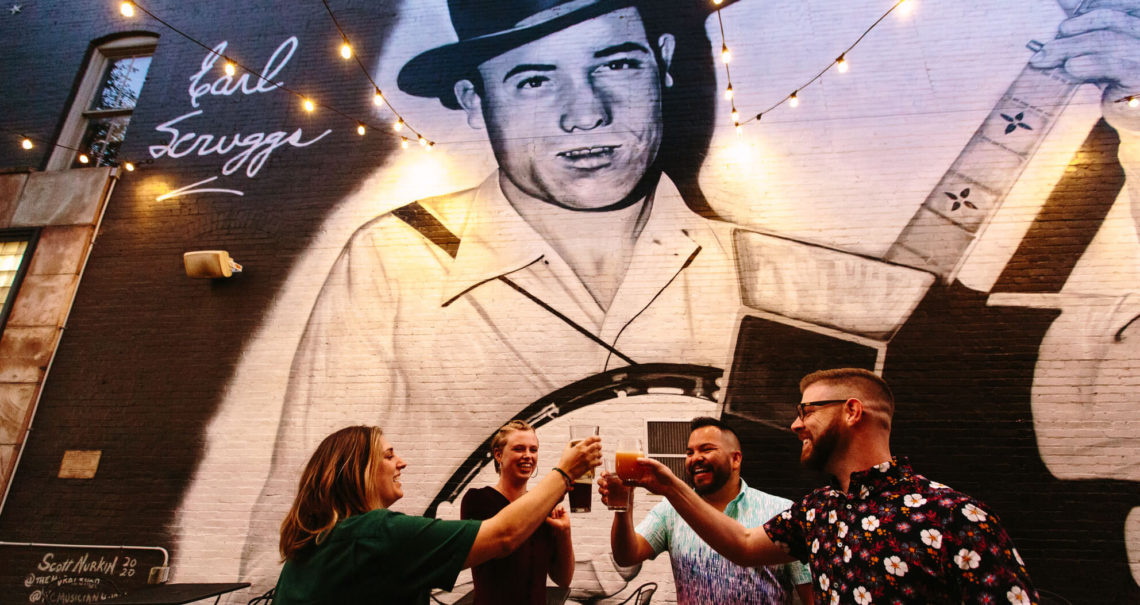 When Red and Lyttle Bridges started smoking pork in Cleveland County in 1946, they didn’t dream of winning awards — they just wanted to make great food. But Dedmond’s Barbecue — renamed Red Bridges Barbecue Lodge in 1949 — was an instant hit, and has remained a local (and statewide) favorite for traditional hickory-smoked ’cue ever since. Everything from the hush puppies to the barbecue sauce is made from scratch. The legendary joint even earned a spot in the Barbecue Hall of Fame in 2021.

“We still use the same recipes that we did 75 years ago; we’ve not changed one thing,” says co-owner — and granddaughter of Red and Lyttle — Natalie Ramsey. “As my grandmother used to say, ‘If it ain’t broke, don’t fix it.’”

Red Bridges Barbecue Lodge is just one of Cleveland County’s homegrown businesses focusing on local foods, beverages, and arts that has earned attention beyond this North Carolina Foothills community. From barbecue, breweries, and wineries to famous musicians and artists, here, locally crafted usually becomes legendary. Let us be your guide. 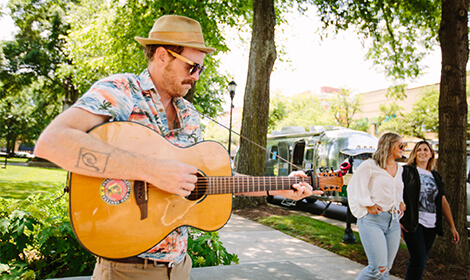 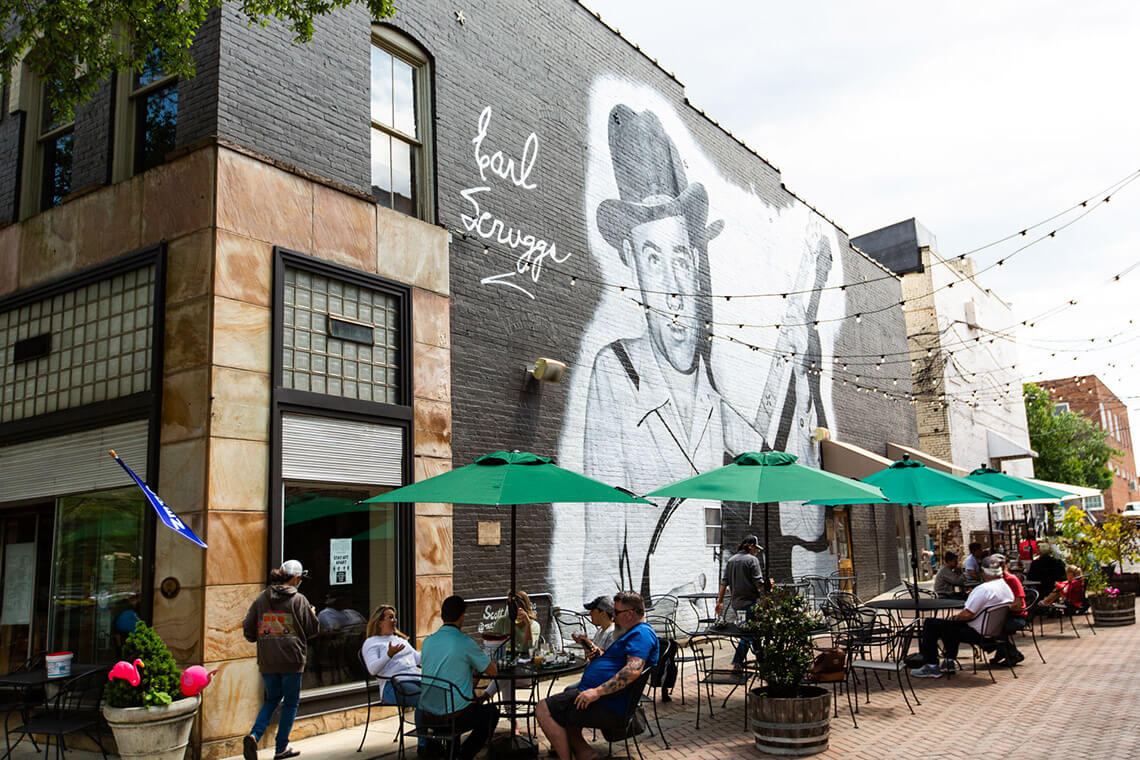 “We saw a craft brewery as a tool that would strengthen Shelby’s business district and bring people to our town,” Holland says.

Today, Newgrass Brewing Company beers are sold across the country and even in Europe, and brews like Shelter from Grace and Forced Laughter sell out within days of their release. At the taproom and restaurant, cold pints are often paired with Southern favorites like pimento cheese and deviled eggs — plus pork belly sandwiches — made in-house with local ingredients.

“There’s such a synergy between farmers and brewers,” Holland says.

Shelby’s brew scene continues to expand and Double-E Brewing made its debut in November 2022. Only a short walk from Newgrass, you’ll find this cozy taproom filled with small-batch brews, electric-themed artwork, and a variety of board games. 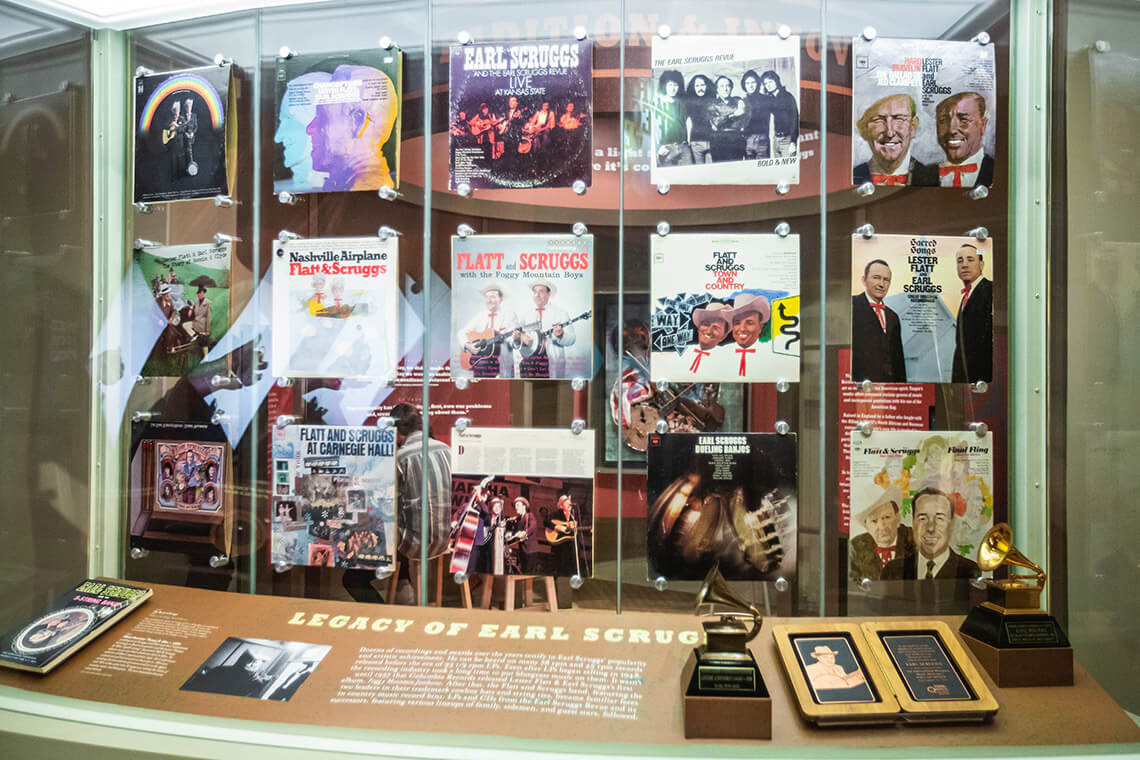 The Earl Scruggs Center highlights the life and work of the legendary musician. Photography courtesy of Cleveland County Travel and Tourism

Earl Scruggs Center: Banjo master Earl Scruggs grew up in Cleveland County and inspired a generation of banjo players with his three-finger pickin’ style that came to be known as “Scruggs style.”

The Earl Scruggs Center, set to celebrate 10 years and Earl’s 100th birthday in 2024, highlights the life and work of the legendary musician with exhibits that showcase his transition from working in textile mills to playing iconic venues like Ryman Auditorium in Nashville.

Although the museum attracts Earl Scruggs fans, an enduring love of the musician is not the only reason to visit, according to executive director Mary Beth Martin.

Popular permanent exhibits include “In These Hills,” which highlights the music, arts, and culture that shaped the Foothills. 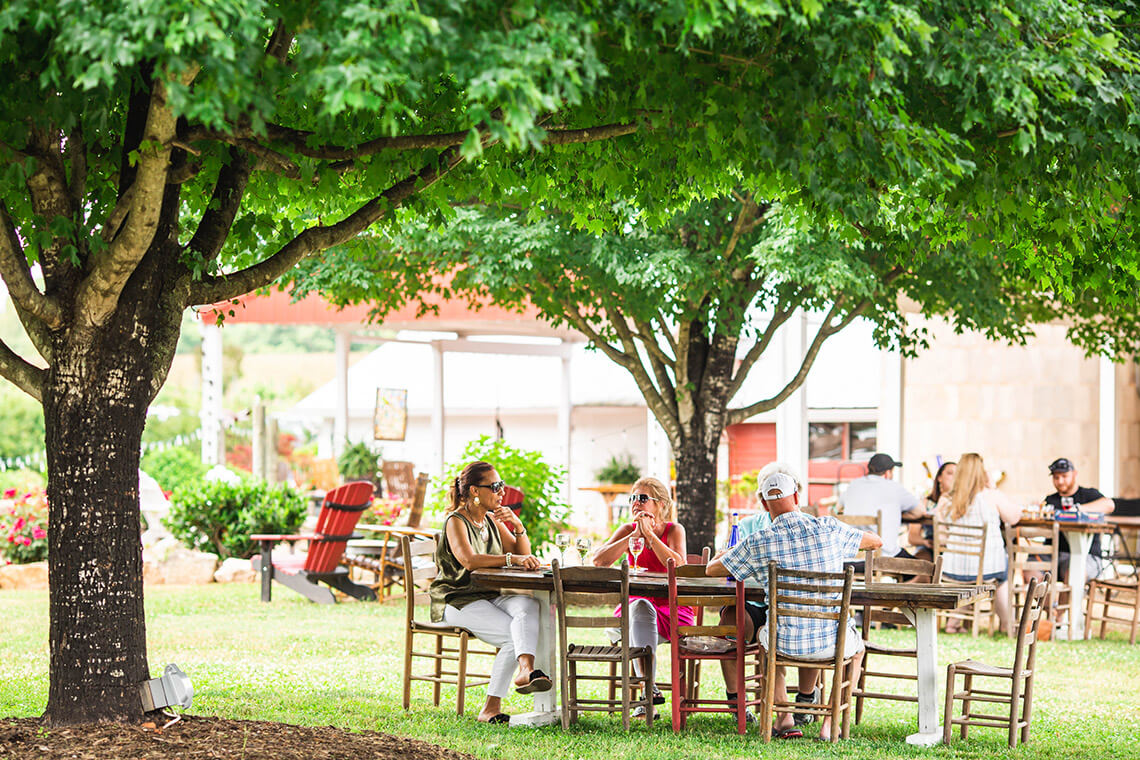 Baker Buffalo Creek Vineyard and Winery: On their farm in Cleveland County, Ann Edwards’s grandfather was once a “gentleman farmer” with a federal license to make liquor; her dad was a dairy farmer, and today, Ann and her husband, Charles, grow wine grapes.

Edwards jokes that the farm evolved from “shine to milk to wine.” But it was a trip to Napa Valley that inspired the couple to plant a vineyard.

“Charles and I went to Napa, and we decided that if they could grow grapes, he could, too. So he bought a book,” Ann recalls. “We had inherited the farm, and it made perfect sense.”

Ann and Charles started with grapes to make Chardonnay and expanded to multiple varieties of Vinifera grapes — the same varieties grown in famous wine regions like Napa Valley — adding Traminette, Riesling, and Cabernet Sauvignon along the way.

They turned the property’s old milking parlor into a tasting room and started hosting tastings and serving flights, and today, Baker Buffalo Creek has become a popular retreat. Charles Edwards loves talking about wine, leading property tours of the vineyard, and sharing with visitors what Cleveland County has in common with Napa Valley.

“Even though Cleveland County isn’t in the mountains, you get out of the cement of the city,” Edwards says. “It’s a nice day trip.” 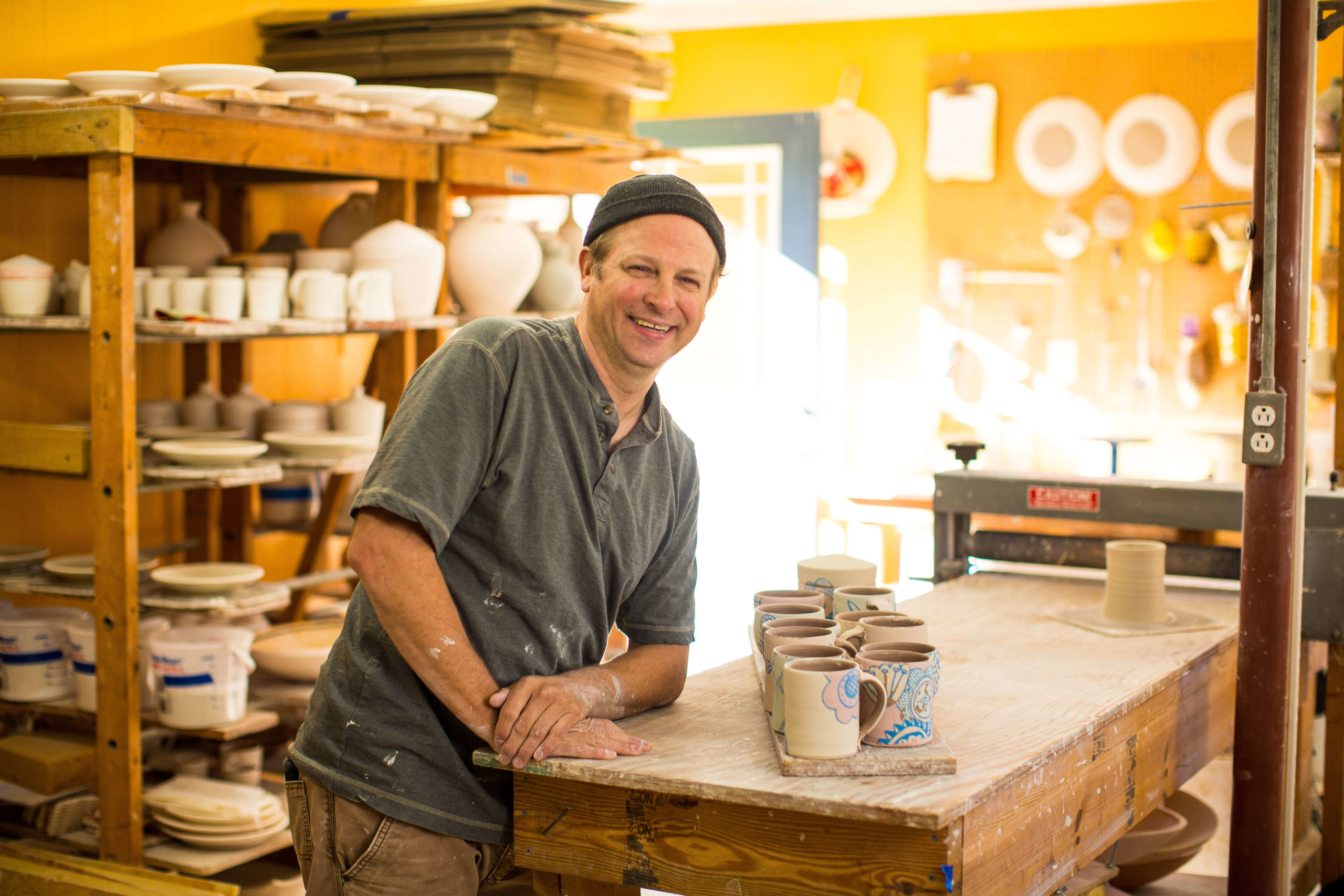 Ron Philbeck is a self-described “functional potter,” who makes cups, bowls, pitchers, and other objects that are meant to be used as well as admired. Photography courtesy of Cleveland County Travel and Tourism

Ron Philbeck Pottery: When Ron Philbeck started taking ceramics classes at Cleveland Community College, he quickly became hooked on turning shapeless lumps of clay into beautiful and functional pots. And the more he created, the more he fell in love with the process.

“I feel like making pots is what I was meant to do,” he says. “I love what I do and that comes across in my work.”

Philbeck is a self-described “functional potter,” who makes cups, bowls, pitchers, and other objects that are meant to be used as well as admired. And it’s garnered him attention from beyond his Cleveland County studio; today, he sells his work in North Carolina and around the world via galleries, craft shows, and an Etsy shop. 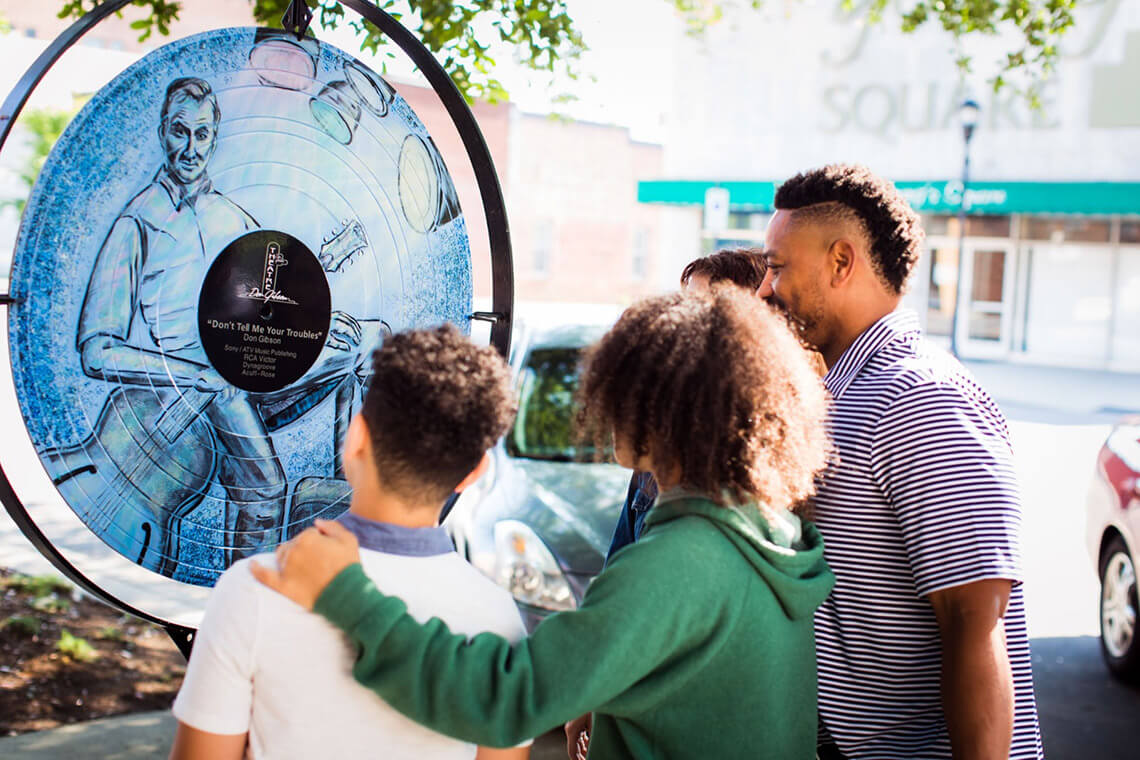 Don Gibson Theatre: Iconic songs like “I Can’t Stop Loving You,” “Look Who’s Blue,” and “Oh Lonesome Me” helped to shape country music, and Shelby native — and Country Music Hall of Fame inductee — Don Gibson was the songwriter who penned the lyrics.

“He is credited with changing country-and-western music to country,” explains Stan Lowery, executive director at the Don Gibson Theatre.

Since opening in 2009, the venue built in Gibson’s honor in downtown Shelby has welcomed artists within genres ranging from punk rock to bluegrass and, of course, country, to the stage. It’s an intimate 400-seat performing arts venue which means there isn’t a bad seat in the house.

“The furthest seat from the stage is only 65 feet,” Lowrey says. “It’s up close and personal with the artist.”

Live music might just be the icing on top of your locally-crafted-turned-legendary trip to Cleveland County … Or, then again, maybe that’s the homemade banana pudding at Red Bridges.